BACK TO ALL NEWS
Currently reading: Aston Martin expected to reveal V12 Vantage roadster this week
UP NEXT
Video | Suzuki S-Cross: see our week behind the wheel

Aston Martin is expected to reveal a roadster version of the recent V12 Vantage at the Pebble Beach Concours d’Elegance this week, which will join the “ultra-exclusive” Aston Martin DBR22 speedster also making its debut at the US event. 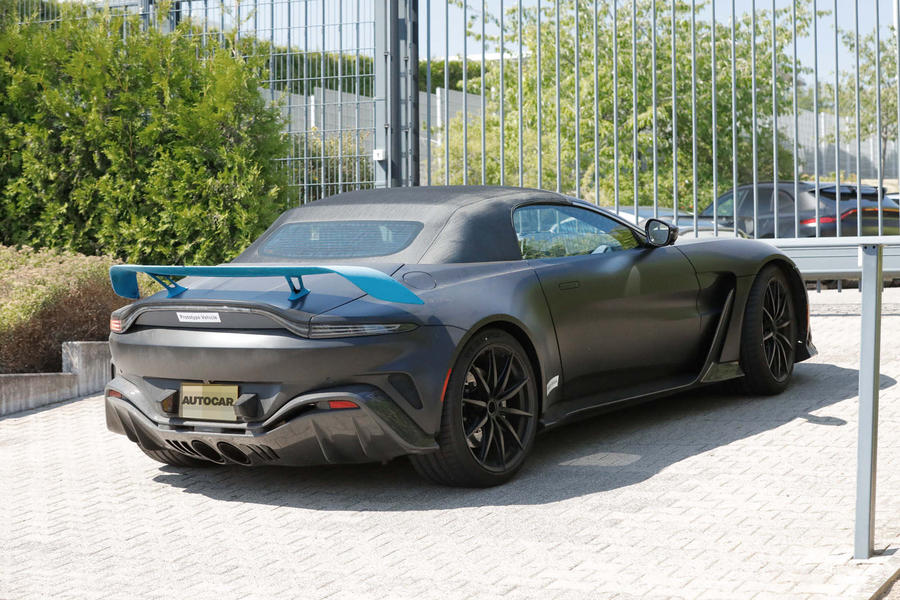 Aston Martin described it as a “truly thrilling performance-focused model” with “high-octane emotion and intense driving pleasure”, set to be revealed on Friday 19 August at its private club at the American motor show.

On the “ultra-exclusive” DB22 – revealed yesterday – Aston said it has been created to celebrate the 10th anniversary of the company's bespoke Q by Aston Martin service.

The speedster is a highly strung tribute to the firm's legendary 1950s race cars, and  “encapsulate the brand’s winning track bloodline, with a nod to success at the 24 Hours of Le Mans”.

Both cars will showcase the new Aston Martin creative identity, which includes changes to its logo for the first time since 2003. The company said it adjusted its creative image in a bid to appeal to a broader market audience.

Aston Martin also said it would update the public on the development of the Valhalla. It will present the interior of its radical, mid-engined Ferrari SF90 Stradale rival for the first time, and potential buyers will have the opportunity to sit inside.

Mind-bending performance for an SUV with a chassis to match, yet not at the cost of everyday road manners

The Valhalla, which is powered by a 937bhp V8 hybrid powertrain and limited to 999 examples, made its first US appearance at Pebble Beach last year.

“As one of the premier luxury events in the world, the Pebble Beach Concours d’Elegance is an important opportunity for Aston Martin to connect with our loyal customers and showcase our latest product offering,” said Aston Martin marketing boss Renato Bisignani.

“We look forward to celebrating Aston Martin’s new era of performance at Pebble Beach and displaying our iconic ultra-luxury models, including a world-first reveal of an exciting new model and the public debut of another thrilling addition to our breathtaking portfolio.”

I hear ya, Symanski... and kinda agree. Thing is, for me at least, it's now hard to imagine Aston doing anything else. They have been churning out this design language for so long now that all of their sports cars since the 1994 DB7 by-and-large look the same. They're not unattractive cars by any stretch, but they just don't look that 'special' anymore... and the infotainment always seems to be two generations behind everyone else. Maybe it is time to give someone else a go at the design...

What more proof do you need when they're launching the same car twice?

Stroll has only put Aston in a more percarious position.   With his latest refinancing of Aston failure is never more closer.   They can't afford another Reichman disaster, yet he's doing the 2023 refreshes of cars that have been sales disasters for Aston.

He might pull something amazing out the bag, but not one of his designs have been a classic so far, therefore it's highly unlikely.   He's no Ian Callum, that's for sure!