Aston Martin's Q bespoke division has launched limited-run 007 Edition versions of the Vantage and DBS Superleggera to tie in with the new James Bond film, No Time To Die.

The Vantage 007 Edition is inspired by the original V8 Vantage, which had a starring role in 1987’s The Living Daylights and makes a cameo appearance in the new film.

The standard grille has been replaced with a retro-style mesh item with a chrome surround, while the diffuser at the rear has been adorned with yellow dashes in reference to the hazard stripes on the rocket boosters of the original car. 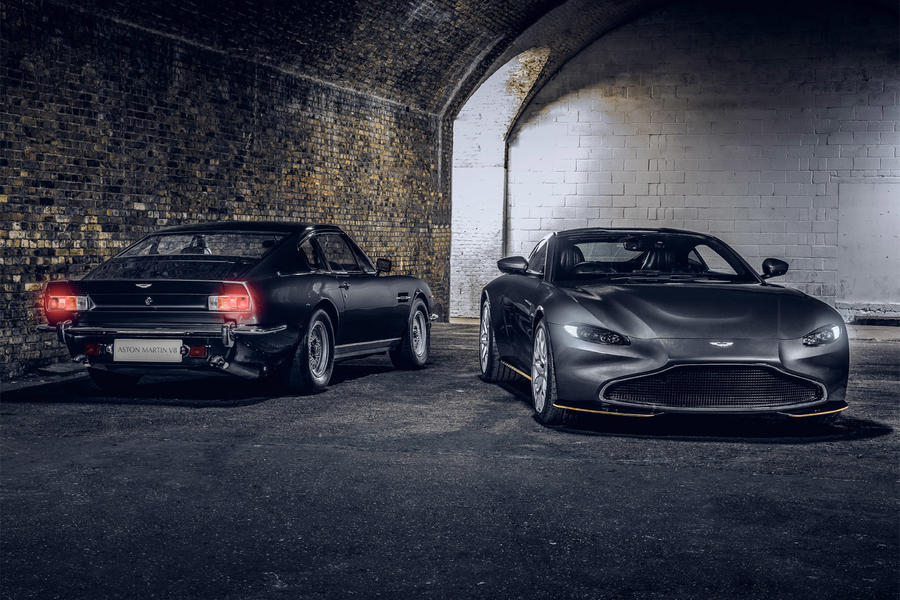 Each of the 100 units sold globally will be finished in Cumberland Grey and will have '96.60' embroidered on their sun visors, in honour of the radio frequency used by Bond in an iconic escape scene from the 1987 film.

Additional bespoke details include a plaque designed to replicate Bond’s iconic ‘gadget’ control panel, a crosshair motif on the paddle shifters - designed to mimic the missile launch button on Bond's car - and a vented side strake.

The special edition can be optionally specified with a specially designed ski rack and pair of skis, as featured on the film car.

Aston Martin will produce just 25 examples of the similarly conceived DBS Superleggera 007 Edition, which is specified to match the example driven by Bond in No Time To Die.

Each will be painted in Ceramic Grey, with the roof, wing mirrors, front splitter, rear diffuser and spoiler finished in black carbonfibre. It gains unique 21in Y-spoke wheels. 007 branding on its wings and spoiler and throughout the interior rounds off the package.

Both cars command a hefty premium over their standard counterparts, with the Vantage 007 Edition available from £161,000 and the DBS Superleggera 007 Edition costing £279,025. Customer deliveries will get under way at the beginning of 2021.

No Time To Die, the 25th film in the long-running Bond franchise, will be released in November. Four Aston Martin models have starring roles: the DBS Superleggera, original V8 Vantage, upcoming Valhalla hypercar and classic DB5, a model closely associated with the secret agent.

DBS Superleggera is quite nice!

DBS Superleggera looks pretty nice, but the Vantage is trying a bit too hard. As a Bond fan, I can imagine an über fan shelling out for one, and why not? Cars at this end of the scale are toys for boys anyway.

BTW, Aston, discreet logos are cooler than obvious badging on the seats or arm rests.

Love them. They both look

Love them. They both look absolutely fantastic. Ignore these old gits above.