BACK TO ALL NEWS
Currently reading: Alpine A110 Premiere Edition price confirmed as £51,805
UP NEXT
Blast in the past: reborn Bentley Blower Continuation driven

First version of new sports car weighs in at 1080kg and its power-to-weight ratio eclipses that of the Porsche 718 Cayman; it' already sold out
Share
Open gallery
Close
Share story

Alpine has confirmed that its A110 Première Édition costs from £51,805, although all 1955 examples of this launch variant have sold out.

That price ranks the new sports car almost directly alongside its main rival, the Porsche 718 Cayman S. The two cars have near identical performance figures, although the Première Edition does arguably come with a more generous standard equipment list.

The Première Édition will be followed by two more versions, the lighter Pure and more luxurious Légende. The former will become the entry-level A110, while the Légende will sit above it. Both will be cheaper than the Première Édition. 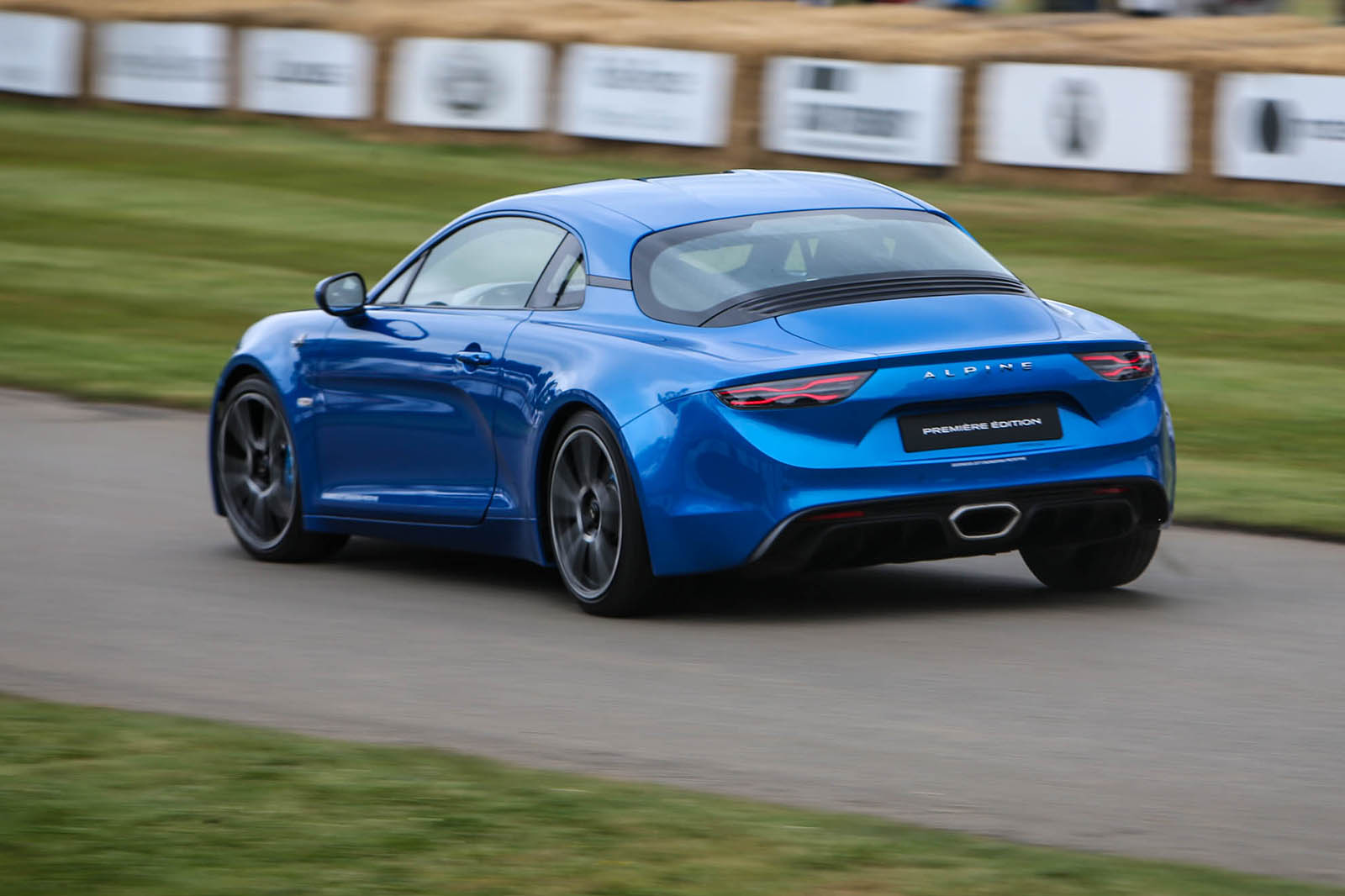 To kick-start sales for its new sports car in the UK, Alpine will open seven centres here starting from the second quarter of 2018, with sites confirmed for major locations including London, Manchester and Glasgow.

Although some of these will leverage dealers already involved with the reborn French brand's parent, Renault, each site will have Alpine-exclusive representatives. The UK's first customer cars will arrive alongside the opening of these sites, which also include Orpington, Solihull, St Albans and Winchester. 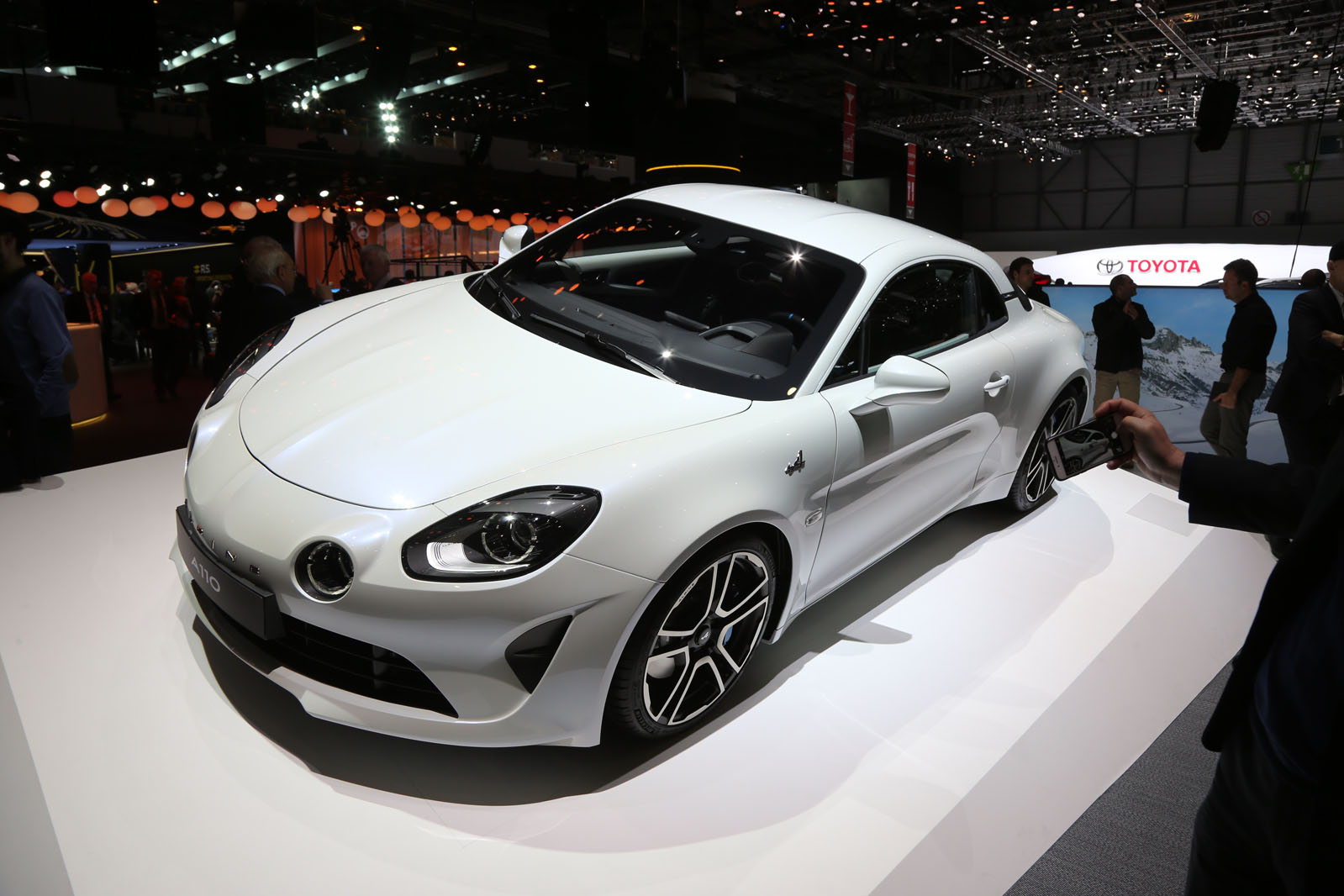 The inspiration for the A110's handling-focused philosophy came from Alpine’s heritage, with the Renault offshoot having cemented its reputation in the 1960s and 70s through giant-killing performances in racing and rallying, most notably with victories in world rallying and at Le Mans.

However, while the new A110 revives the name of the car that Alpine is most famous for historically, its then-head of engineering David Twohig, told Autocar earlier this year: “It’s inspired by our history, especially with that emphasis on light steering and a car that turns around you, but above all it’s a thoroughly modern sports car.”

The A110 is powered by a turbocharged 249bhp 1.8-litre four-cylinder engine producing 236lb ft of torque, transversely mounted and located mid to rear in the rear-drive car. This is inked to a wet-clutch seven-speed paddle shift transmission.

To hit the 1080kg target kerb weight, the Alpine development team created a bespoke aluminium chassis after studying the potential for a combined steel and carbon fibre structure. “We did the maths with aluminium and got the answers we wanted,” Twohig said. “The key decisions lay in the structure’s mass, weight and torsional stiffness, and the next consideration was achieving top-notch fit and finish; carbon fibre or steel structures don’t allow the same quality.”

The A110 is unusually compact, at 4.18m long, 1.80m wide and 1.25m height. Weight distribution is 44:56 front to rear, aided significantly by the decision to locate the fuel tank in the front of the car. However, there is space for two 190cm-tall adults and limited luggage space. The car’s compact size does bring compromises - there is no glovebox, for example.

Other weight-saving initiatives include Sabelt-developed seats, which have a fixed back but slide fore and aft. They weigh 13.1kg each, around half that of the seats in the Renault Mégane RS. Twohig says Alpine has achieved this without compromising comfort. The windscreen cleaning system also channels water through the wiper blades, making it significantly more efficient than a traditional system, in turn allowing for a washer bottle less than half the size normally used. And the Brembo-developed electronic parking brake is also a world-first, in using the main brake set rather than an additional one and saving 5kg in doing so. 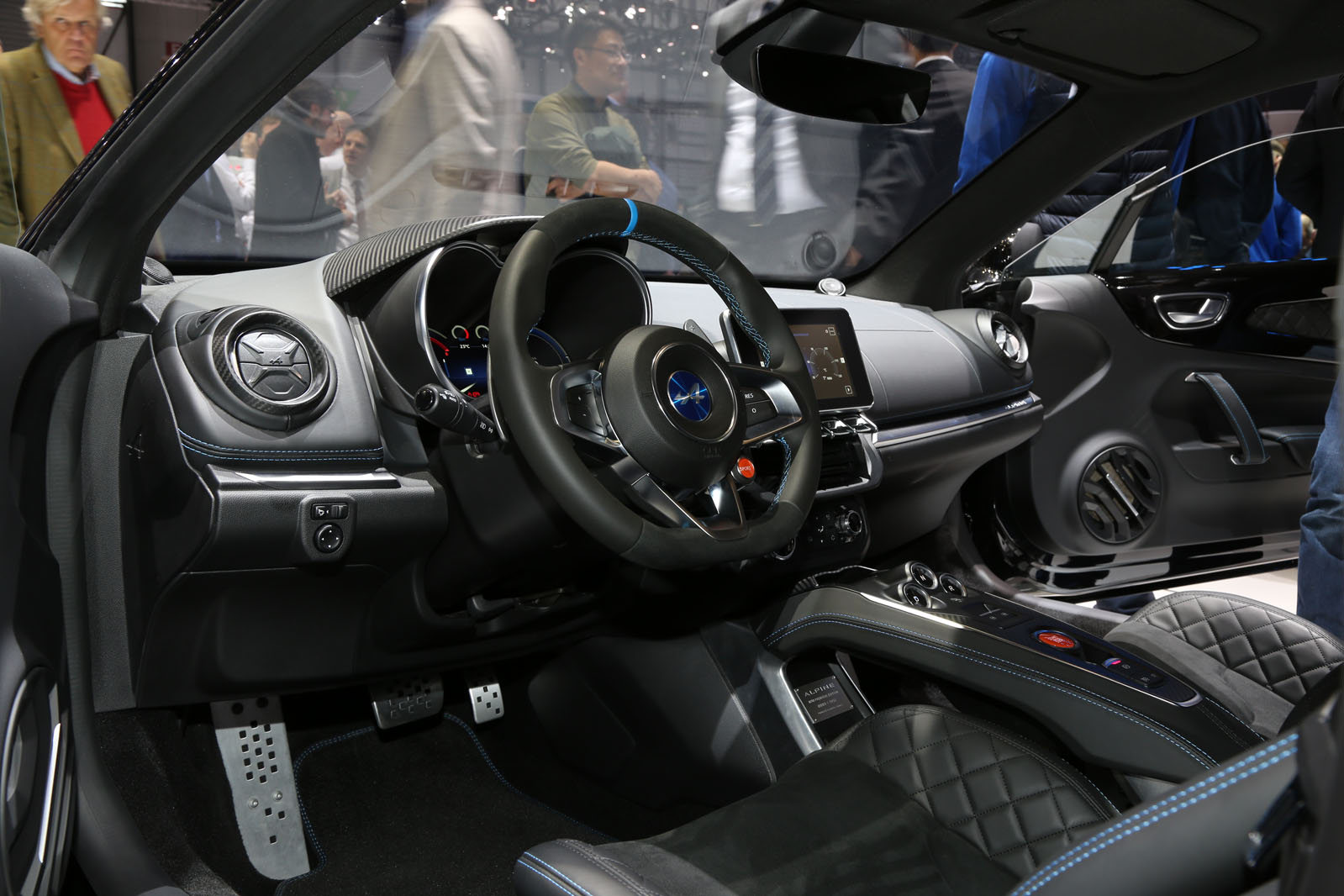 The A110 can cover 0-62mph in 4.5sec, eclipsing both the 718 Cayman’s 5.1sec and 718 Cayman S’s 4.6sec. However, Twohig said his team - including many Renault Sport staff - were told to focus was on agility over pace, and to that end specified double wishbone suspension at the front and back of the car, developed its own gear ratios for the semi-automatic Getrag gearbox, specified deliberately small tyres and developed an electronic differential for different driving modes and an aerodynamic diffuser to create downforce without compromising the rear-end styling. The steering is power-assisted.

“The all-aluminium forged suspension was a no-compromise decision to get agility and suppleness; we wanted the best,” Twohig said. “The decision to develop our own gear sets was harder - or at least more expensive - but we knew it was the only way to get the car we wanted. Throughout this project we concentrated on doing it right, so that meant custom pinion sets, a wet clutch, a latest seven-speed gearbox, launch control and three proper driving modes - Normal, Sport and Track - that have a distinct character across the engine and pedal maps and the active exhaust, and the option to go beyond Track and switch ESC completely off.

“The electronic solutions meant we didn’t need a limited slip diff. It would have added weight and complexity, where the reality is that an e-diff set-up can handle these power levels perfectly well. I’ve tested it and I can promise you that you can get some pretty big angles in Track mode without it feeling like it's about to bite you. This is a car that flatters.” 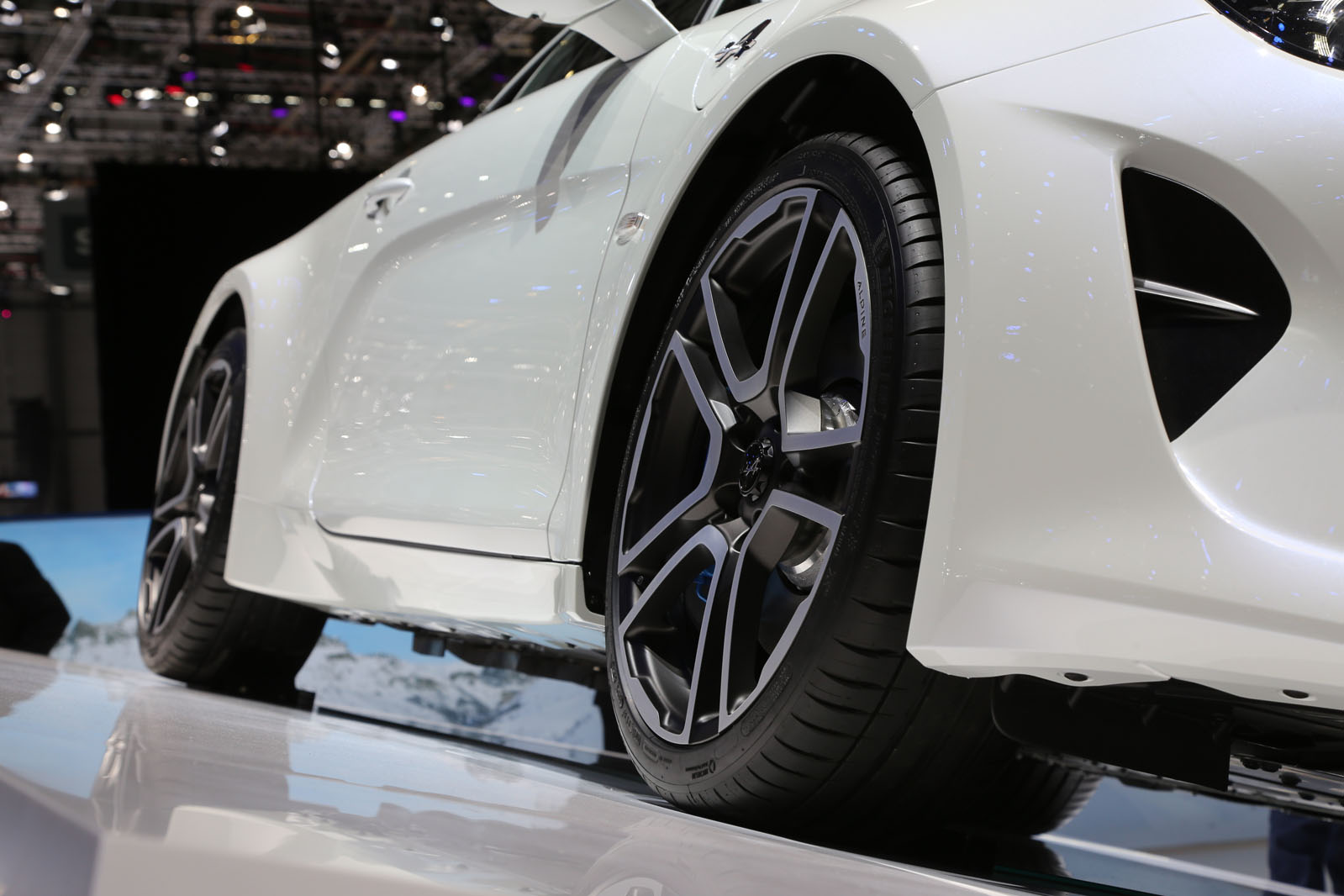 The Michelin Pilot Sport tyres are wrapped around 18in wheels on the launch car, with 235 section rear tyres and 205 section fronts, but 17s (225 rear and 195 front) will be standard on the later variants. “We could have gone bigger to make it look good, but the tyres look just fine and their performance matches the weight, power and torque we have. We didn’t want loads of mechanical grip; we wanted a car that's mobile and which slides relatively easily under the right circumstances.”

The rear underbody diffuser was developed after the A110's designers resisted pressure to put a rear spoiler on the car. “The rear lines are beautiful, so we looked at solutions,” said Twohig. “We could have done a pop-up spoiler, but that meant adding complexity, weight and cost. So we worked on an aerodynamic solution along the car’s floor, with the eight strakes channelling the air to cut lift. We think it’s the only car on sale that will do 155mph without needing a spoiler.”

The A110 is available in blue, black or white.

Will it Go on Fire Too?

Is it now fitted with a fire extinguisher system?

Everything a Cayman isn't and

Everything a Cayman isn't and all the better for it. It's production has also had some input from a former colleague of mine and a poster on here....
TStag 1 May 2018

This car is red hot, smoking

This car is red hot, smoking even. Ask our friends at Top Gear. Much safer buying a Porsche or a Jaaaag

This car is red hot, smoking even. Ask our friends at Top Gear. Much safer buying a Porsche or a Jaaaag

They let you off the Sunshine bus again?