The Toyota bZ4X has gained improved range figures ahead of its upcoming European launch, with deliveries for the firm's first bespoke, all-electric SUV set to begin in the summer.

Powered by a 71.4kWh battery, the bZ4X offers an official WLTP range of 320 miles in its front-wheel drive guise and 292 miles for cars equipped with four-wheel drive. Previously, the model was expected to offer around 280 miles of range.

Prices start from £41,950 and four specification levels are available: Pure, Motion, Vision and a limited Premiere Edition. A new electric four-wheel drive system called X-mode has been introduced for the model and Toyota says it gives the bZ4X “class-leading off-road driving capability”.

Entry-level Pure models are front-wheel drive only and are equipped with 18in alloy wheels, an 8.0in touchscreen multimedia system and a 7.0in digital driver's display as standard. Other basic features include a reversing camera, keyless entry and climate control with a remote operation function.

Drivers can choose front- or four-wheel drive on the next-step Motion specification, which starts from £45,750 and gains a rear spoiler and rear privacy glass. Inside, the model is fitted with heated front seats, ambient lighting and a wireless phone-charging tray.

Vision trim heads the regular bZ4X model line-up with 20in alloy wheels, heated and ventilated front seats with synthetic leather upholstery and an electric tailgate with a kick sensor. Safety is improved with rear parking sensors with automatic braking and remote parking assistance is also standard. Prices start from £47,650.

Limited Premiere Edition models are available exclusively through Toyota’s online retail service and temporarily top the model range. Prices start from £51,550 and the trim level features all of the equipment of the Vision but also gains a premium, nine-speaker JBL sound system and a panoramic sunroof. Four-wheel drive is standard. 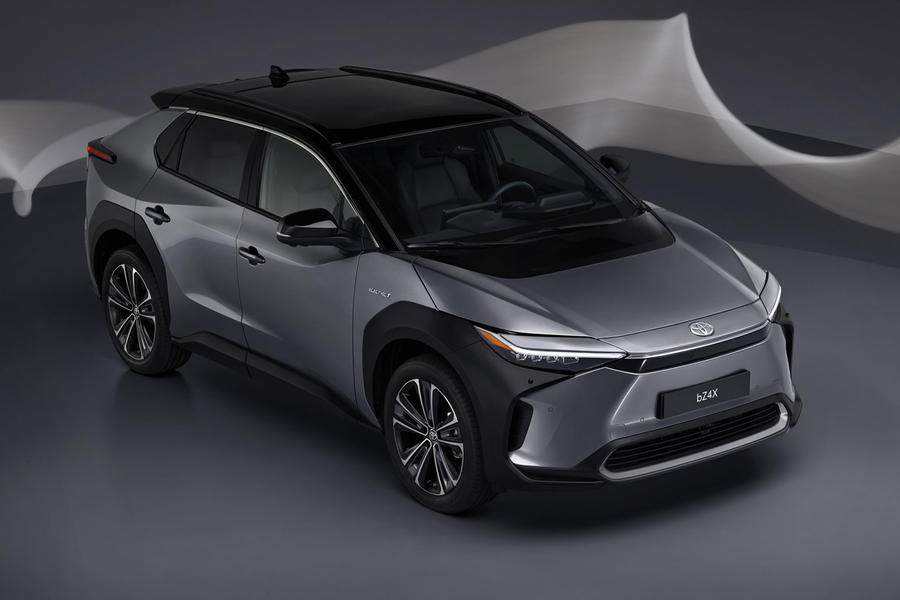 The bZ4X starred at the LA motor show earlier this year, showing off a radical design that was largely unchanged from the concept shown in April.

Spearheading this roll-out, the bZ4X is the first model to use the new e-TNGA electric vehicle architecture developed in collaboration with Subaru, whose own first e-TNGA-based EV is the Forester-sized Solterra SUV. Toyota's SUV received its European debut on 2 December and orders opened on 15 December. Subaru is expected to launch the Solterra a few months later.

The defining characteristics of the platform include short overhangs and a long wheelbase, which is said to provide a “spacious and open cabin”. In fact, Toyota says rear leg room is comparable with the near-900mm offered by Lexus’s flagship LS luxury saloon. Here, the platform underpins a four-wheel-drive crossover (hence the ‘4X’ suffix), which is claimed to major on comfort, connectivity and openness.

Heavily angled styling cues, chunky black wheel-arch trim, a familiar silhouette and contrasting roof hint at the influence of the strong-selling Toyota RAV4 SUV, which has recently been made available with a plug-in hybrid powertrain. However, various characteristics, including an all-new front-end design, point to a different design language for bZ-badged EVs. 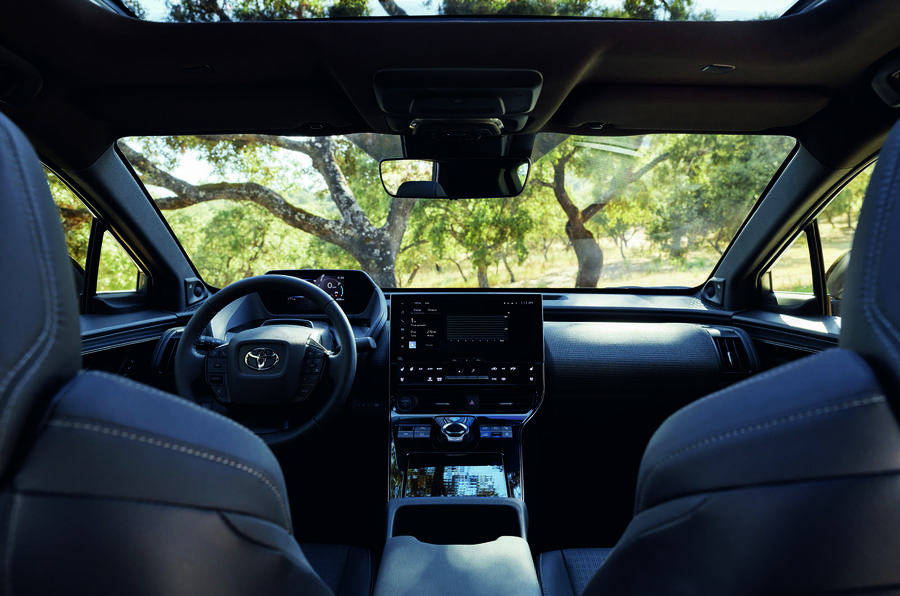 The cabin has been designed primarily to give the driver “a sense of direct connection to the road and to important information”. The instrument panel is mounted low for improved forward visibility and to minimise distraction. The large central display, wide centre console and textured dashboard have been carried over from the concept.

The powertrains on offer draw on Toyota’s 20-plus years of offering electrified powertrains and are said to possess “class-leading efficiency and a very competitive driving range”.

Two variants are offered: the front-driven entry car with a single motor producing 201bhp and 195lb ft cracks the 0-62mph sprint in 8.4sec, while the twin-motor range-topper – which uses four-wheel drive technology developed by Subaru – boosts power to 214bhp and torque to 248bhp and cuts the 0-62mph time to 7.7sec.

Like the radical LF-Z concept shown by Toyota luxury brand Lexus recently, the bZ4X uses an innovative steer-by-wire system, which removes the mechanical link between the steering wheel and front axle. Toyota claims this enhances control while minimising the directional influence of rough surfaces and braking.

Toyota will take the concept’s distinctive yoke-style steering device to production as a result, in select global markets, given the driver has less cause to move their hands around the wheel. The bZ4X will, said Toyoshima, make “driving easier and more fun”.

So you can order a Toyota beyond Zero 4WD crossover in FWD? Decent looking car, nonsense name. I hope Subaru release a WRX or STi version because the 4WD could surely handle more power.

Yet another family car from a mainstream manufacturer with an April Fool's price.

si73 15 December 2021
Styling wise it looks more Lexus to me, I know they're the same brand but Lexus ux has similar design cues, looks far better than the bland VW equivalents. Different market I suppose but the higher spec versions aren't that far off the i4 tested today and that's where I'd spend my money, if I had it, I'd much rather the sporty saloon/coupe to another boring SUV, look forward to more interesting EV models from Toyota, hopefully something I can afford.
View all comments (30)