BACK TO ALL NEWS
Currently reading: 2017 Jaguar XF Sportbrake revealed as new BMW 5 Series Touring rival
UP NEXT
New 2023 Audi A4 Avant undergoes tests in the Alps

Stylish new estate will major on driver appeal and practicality and is ready to take on BMW's driver's estate; on sale now from £35k
Open gallery
Close

Jaguar is pitching its new XF Sportbrake directly at the BMW 5 Series Touring, the current best driver’s car in the class.

The British manufacturer says it has imbued the estate with the same level of driver engagement as its saloon sibling, albeit with additional luggage space.

The new estate is powered by a choice of three engines, all of which are shared with the Jaguar XF saloon. The car is offered with either a six-speed manual or eight-speed automatic transmission, and in either rear or four-wheel-drive form.

The four-wheel drive system is said to respond more quickly than previous set-ups. From its default rear-biased setting, it can send torque to the front axle in 250 milliseconds when it senses more grip is required.

At the base of the engine range is a turbocharged 2.0-litre diesel that produces 161bhp and returns claimed combined fuel economy of 62.8mpg. It drives the XF Sportbrake’s rear wheels and is only available with the manual gearbox. This model is the cheapest to tax — it emits a claimed 118g/km of CO2 — and the most affordable on offer at a starting price of £34,910. However, the variant above it, a 178bhp version of the same 2.0 unit, is predicted to be the biggest seller in the range. It is offered with either rear or all-wheel drive. 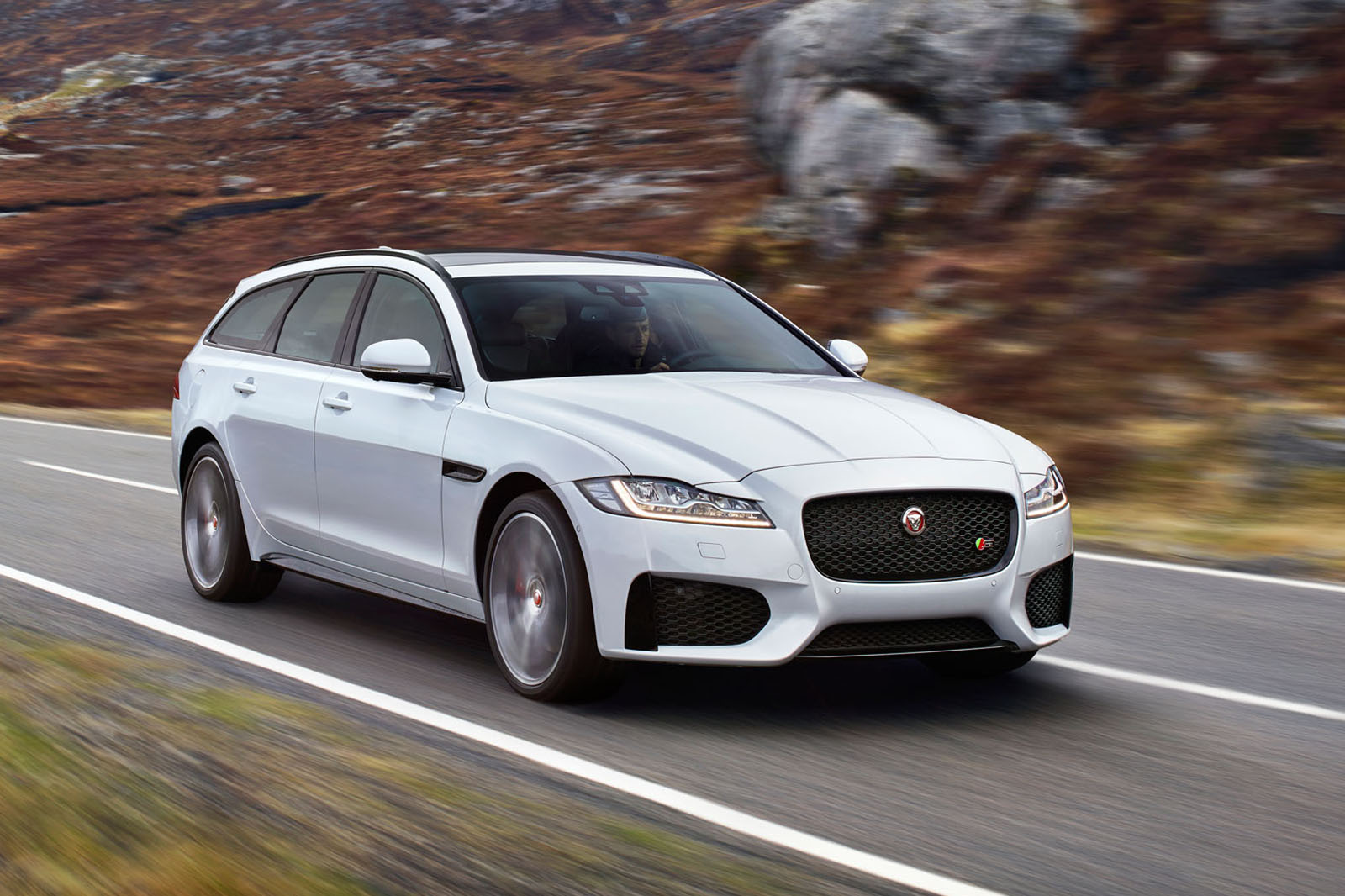 Completing the four-cylinder range are a 237bhp 2.0-litre diesel and a 247bhp 2.0-litre petrol. The line-up is topped by a 3.0-litre V6 diesel that can sprint from 0-60mph in 6.1sec time but also returns combined fuel economy of 49.6mpg. It comes only with rear-wheel drive and the eight-speed automatic transmission. This is expected to be a strong seller in the UK due to its towing ability, partly thanks to its 516lb ft.

Jaguar XF Sportbrake is a sporting estate under a different name, but is it any good?

Other markets will also offer Jaguar’s 375bhp turbocharged V6 petrol engine as a rangetopper, but this variant isn’t planned for launch in the UK. Nevertheless, deputy vehicle programme director Alan Hill told Autocar that "the engine could easily be added" to the line-up, should British demand be strong enough to justify it.

The XF Sportbrake weighs 1660kg in its lightest guise and is said to have a near 50/50 weight distribution.

The car is built on Jaguar’s lightweight aluminiumintensive architecture and has been given different chassis set-up from the saloon.

Despite the different settings, Hill said the model is retains the sporty setup of its sibling. Both cars feature a stiff double-wishbone front suspension that uses lightweight aluminium components. The XF Sportbrake has air springs at the rear in place of the saloon’s standard steel coils to enhance its load-lugging capability. The air springs have been designed to keep the body composed even when carrying loads and are claimed to be most effective when combined with optional adaptive dampers. The system is mounted to the same integral rear link set-up as the XF saloon.

The new estate comes with Jaguar’s Configurable Dynamics package as an option on automatic cars. This enables drivers to adjust the steering weight, throttle mapping and gearshift modes. Ride quality can also be altered on cars with adaptive damping.

Among the list of driver assist features is adaptive cruise control, blindspot monitoring and reverse traffic detection technology, as well as park assist. There’s also a driver monitoring system that can trigger alerts if the car wanders across lanes, or if the driver shows signs of fatigue.

Jaguar's All Surface Progress Control system is included in all-wheel drive automatic cars and enables drivers to hand power over to the car in low grip scenarios, so it can juggle torque to each wheel automatically and therefore reduce the chances of the car getting stuck.

The new XF Sportbrake has 565 litres of boot space with the rear seats up and 1700 litres with them down. That beats the XF saloon by 25 litres and 815 litres respectively and is close to its key rival, the 5 Series Touring. 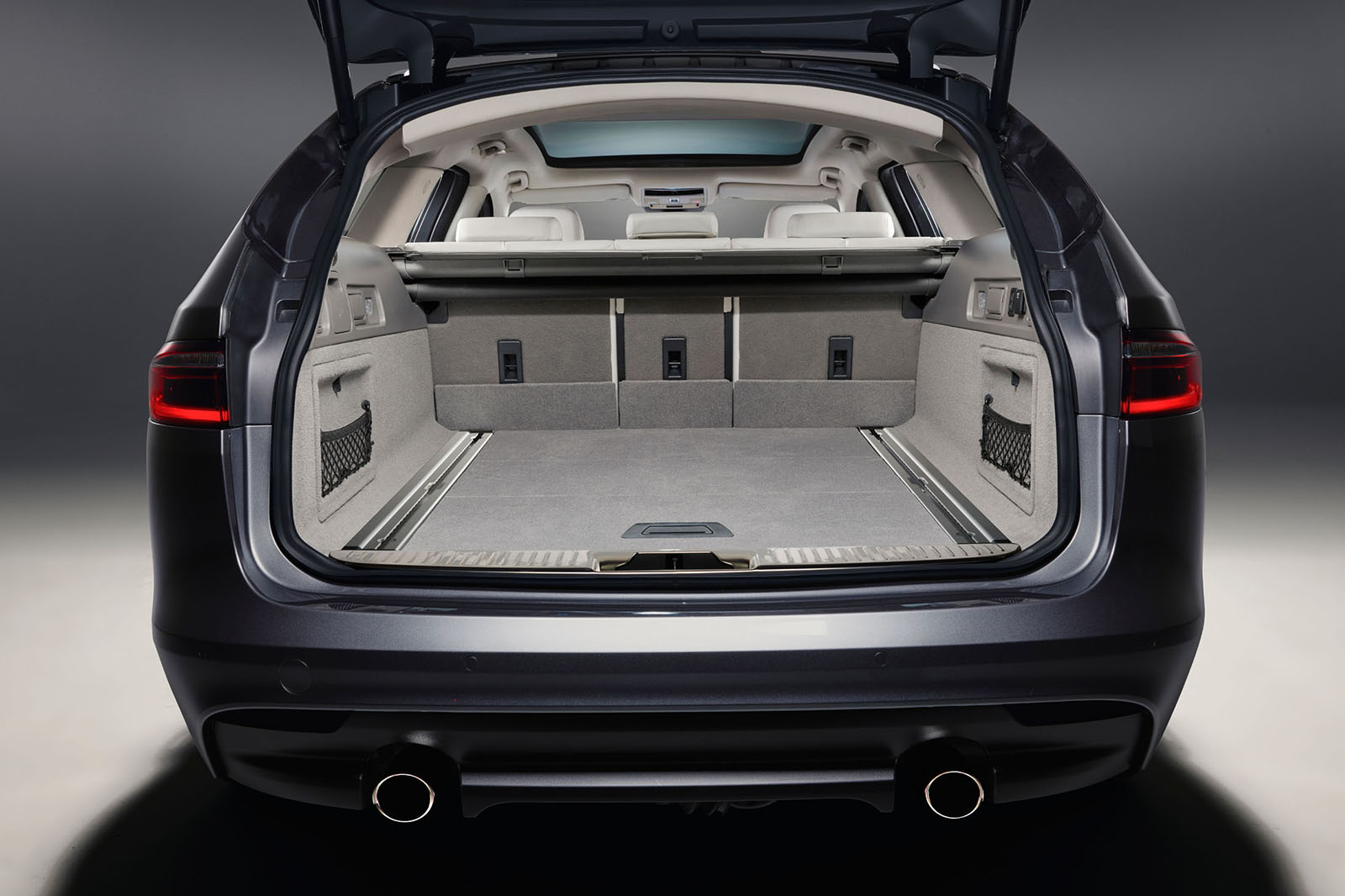 The XF Sportbrake’s rear seats come as standard with a 40/20/40 split and the rear audio speakers have been moved from the parcel shelf (where they’re located in the saloon) to the rooflining to further increase load space. The XF Sportbrake can also carry up to 100kg on its roof, thanks to a 320-litre luggage box that’s on the new car’s options list.

Jaguar claims the new XF Sportbrake can tow up to two tonnes, which is 400kg more than the XF saloon and F-Pace SUV can manage. Even the lowest-powered Sportbrake can pull 1900kg.

Jaguar’s new estate is 6mm shorter than the previous XF Sportbrake, but its wheelbase is 51mm longer, an alteration that is claimed to improve interior room and enhance the car’s ride. Jaguar says its new estate model has an identical drag coefficient to the saloon, at 0.29.

The XF Sportbrake has an estate shape that, unlike the first-generation Sportbrake, was part of the design plan from the new XF’s very beginning. Jaguar design director Ian Callum said this early integration into the XF model plan enabled the team to create an exterior design that’s actually sportier than the saloon’s.

“When we did the first [Mk1] Sportbrake, it wasn’t planned from the start,” said Callum. “But this time, the Sportbrake has been designed in before, so we could change [the design] from the B-pillars [backwards] straight away.”

The car’s rear does away with the curvaceous design of its predecessor for a more aggressive look. It features Jaguar’s most recent style of slim tail-lights, ensuring the XF Sportbrake is in line with the F-Type sports car and the F-Pace SUV. Above the rear lights, the rear window line is heavily raked like the firstgeneration Sportbrake’s, but it finishes more abruptly at a continuous line that runs around from the side of the car and extends all the way to the front wheel arches. 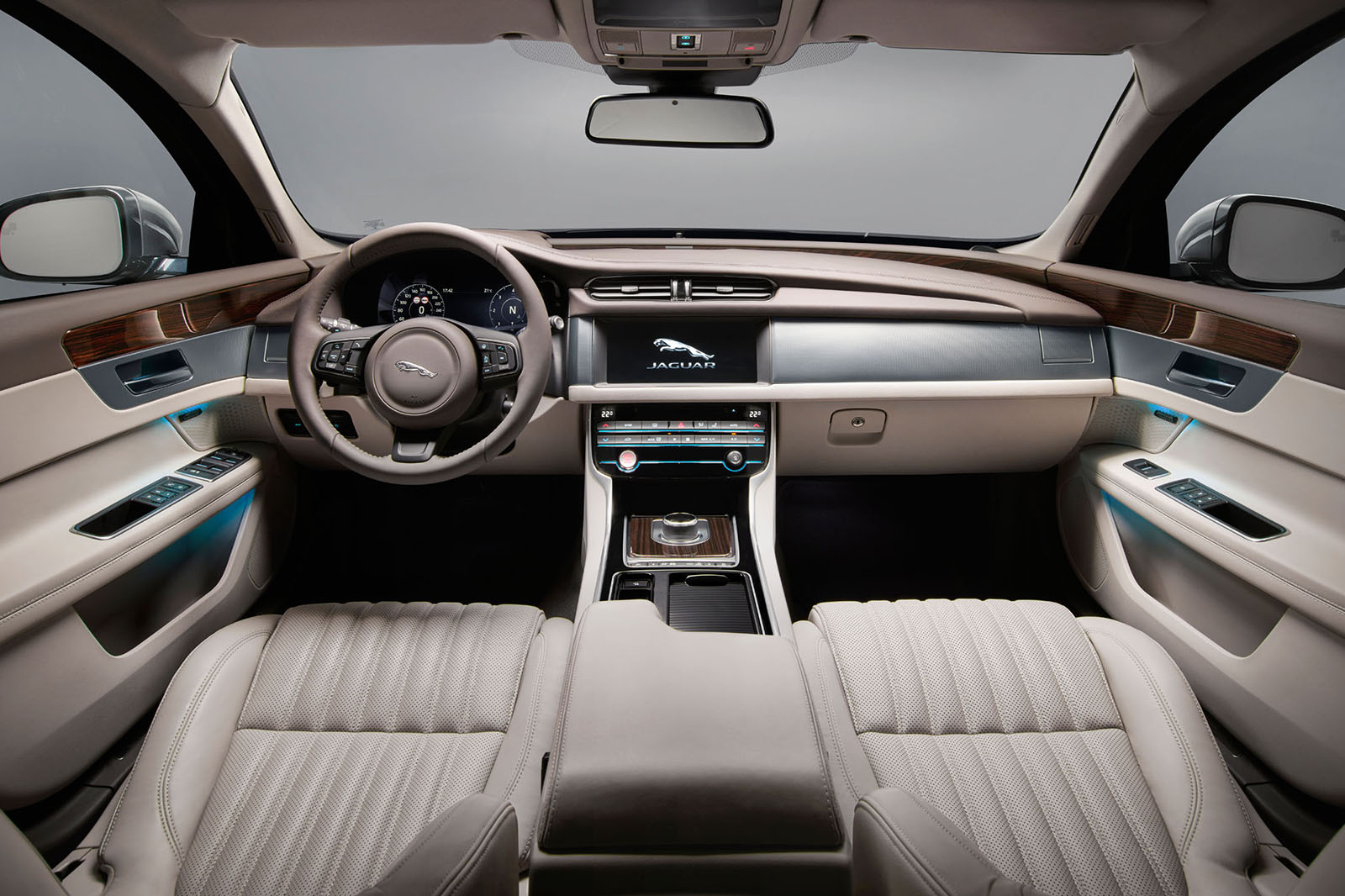 “It’s better-looking than the saloon, I think,” said Callum. “It gives us the chance for a lovely sweeping roofline and a sense of movement. It’s a very elegant car. The window graphic has a very elegant shape.”

The front of the car is familiar from the XF saloon, as is the cabin, but the Sportbrake introduces a panoramic roof to the XF range. It also has a gesture control feature for the tailgate, which can be opened when a foot is waved under the rear of the car and the car’s key is within close range.

The same action can be used to close the tailgate as well, making the whole process hands-free. In order to prevent the automatically rising tailgate from hitting low ceilings in car parks and sheltered areas, a maximum opening height can be pre-set.

The XF Sportbrake features Jaguar’s InControl infotainment system, which is operated via a centre consolemounted 10in touchscreen. The set-up features dual-view technology so passengers can see a different display from the driver. The car is also available with the Activity Key, which is worn on the driver’s wrist and negates the need for a conventional key to be carried.

Order books for the new XF Sportbrake are open now and prices start from £34,910. That’s £2610 more than the base XF saloon, but undercuts the 5 Series Touring by £3475. Jaguar will launch the XF Sportbrake into the US market for the first time. It will be the last new variant of the current XF, with no coupé or other bodystyles planned.

Is Jaguar Land Rover looking to an all-electric future?

Without 4-wheel drive on the

Without 4-wheel drive on the 3 litre diesel version I would not see it as a competitor to the 530d. It's all very wannabe isn't it, fur coat no knickers.
YouveGottaBeJoking 15 June 2017

Yawn. Three whole pages in the magazine. Which actually could have been covered with a picture, and "Same as the saloon but with a bigger boot. And not these engines."
androo 15 June 2017

I reckon this will outsell the saloon version. Sadly, the XF saloon is Jaguar's dullest car since the X-Type, so it needed a bit of interest injecting into the range. The estate gets rid of the awkward third side window that makes the saloon look so anonymous. But its it competitive?
View all comments (31)