BACK TO ALL NEWS
Currently reading: 2017 Audi A8 revealed as brand's most high-tech model yet
UP NEXT
Lamborghini to launch four-seat EV crossover and electric Urus

Audi's new flagship shows off the firm's new look and is crammed with sophisticated technology; on sale in October
Open gallery
Close

The new fourth-generation Audi A8 has been unveiled in the run-up to the start of UK sales in October.

Hailed as the dawning of a new era for the German car maker, the new flagship saloon has been comprehensively re-engineered. Audi intends it to mount a successful challenge against upmarket rivals such as the BMW 7 Series, Lexus LS and Mercedes-Benz S-Class.

Here's a walk around of the Audi A8 with A LOT of media in the way Comment: will a car become your office of choice?

Among the showcase features available from the new A8’s long list of optional equipment is a so-called Traffic Jam Pilot system. Part of a suite of 41 individual driver assistant functions, it takes charge of driving in slow-moving traffic up to a speed of 31mph on motorways, where a physical barrier separates the two carriageways. 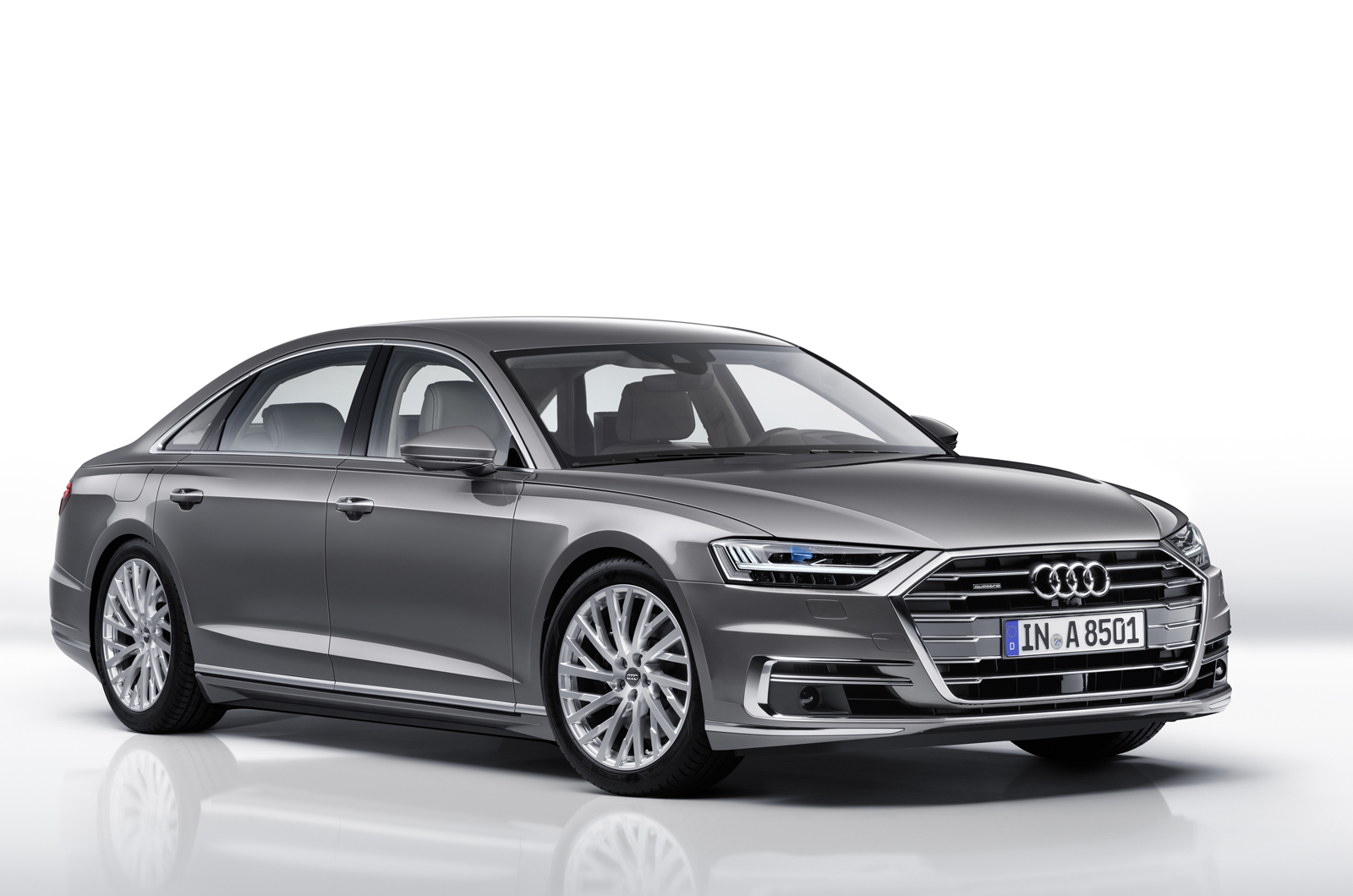 As well as relying on cameras, radar and ultrasonic sensors, Traffic Jam Pilot is the first automated driving system to be offered on a production car to employ a laser scanner. The new system manages starting, accelerating, braking and steering functions. But without a legal framework for its operation in many markets, Audi says it will adopt a step-by-step approach to the introduction of its new autonomous driving tech.

The new A8, which is codenamed D5 within Audi, follows an evolutionary design path. Its exterior appearance blends a number of newly interpreted elements from the earlier Audi Prologue concept car — including a heavily reshaped grille, tauter surfacing and a new tail-light treatment — with time-honoured cues from earlier versions of the Audi flagship.

The body of the new A8 makes use of more materials than any previous Audi model. Aluminium makes up 58% of the structure, but it also adopts steel, magnesium and carbonfibre, which forms the basis of the rear bulkhead.

Inside, the new Audi has a clean and contemporary-looking dashboard, a redesigned multi-function steering wheel and touchscreen controls closely modelled on those first seen on the Prologue concept car. 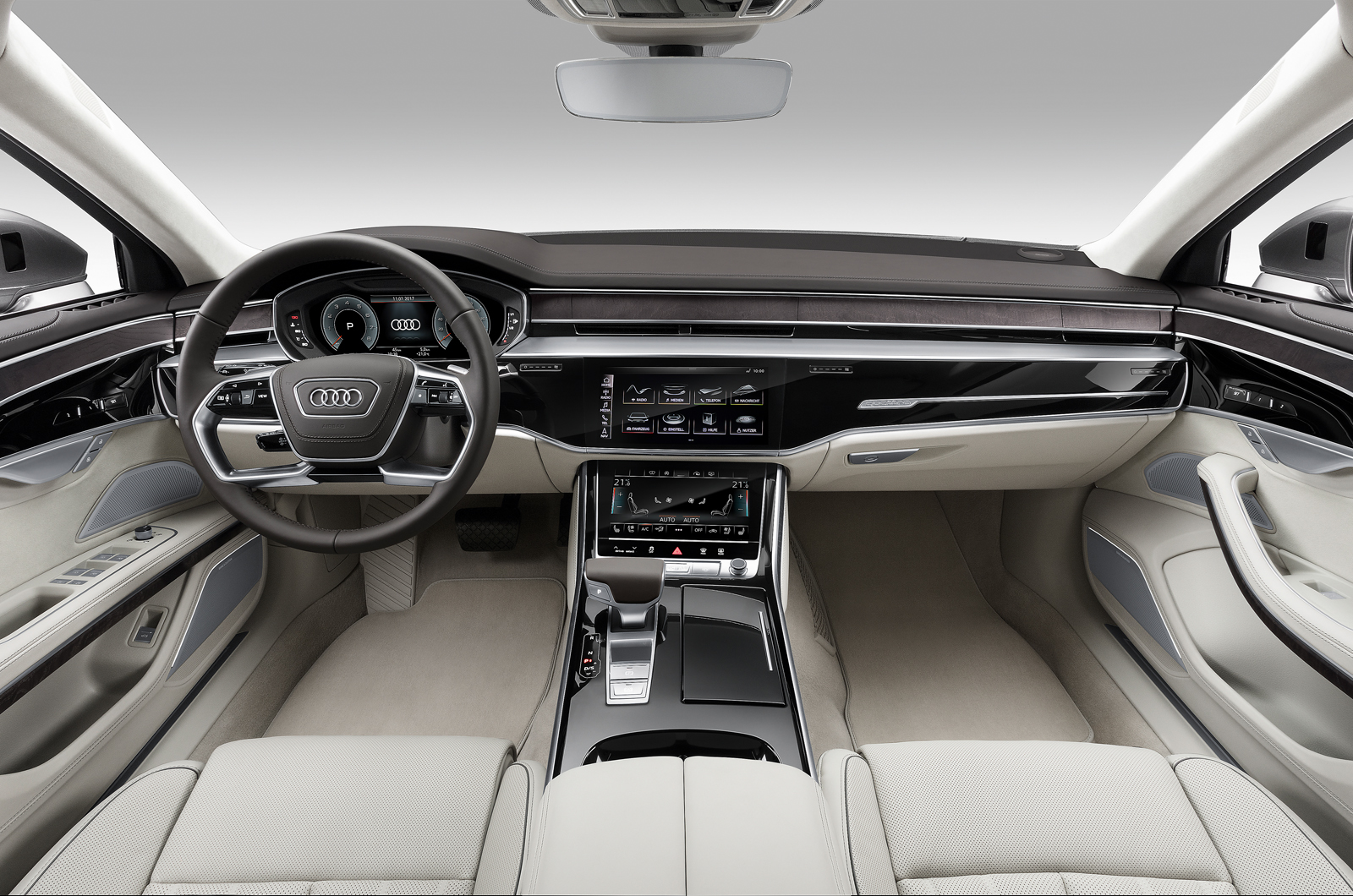 Highlights include new front seats that are 4kg lighter than those in the old A8, high-definition digital instrument graphics and a revised MMI (Multi-Media Interface) system with two separate displays — one measuring 10.1in and the other an 8.6in curved unit.

There’s also a second-generation MIB infotainment system that uses a quad-core processor from Nvidia and is claimed to be 50 times faster than the first-generation unit.

The A8 will be offered with the choice of two turbocharged V6 engines from the outset of sales in October. One is a 3.0-litre petrol unit developing 335bhp in the 3.0 TFSI and the other a 3.0-litre diesel with 264bhp, 10bhp more than its predecessor, in the 3.0 TDI.

Both engines are allied to an eight-speed automatic gearbox and quattro four-wheel drive, which can be ordered with an optional sport differential.

The biggest engine in the line-up will be a 6.0-litre petrol W12. This revised version of the Volkswagen Group’s turbo W12 is 300cc smaller than its predecessor yet it delivers an added 85bhp, at 585bhp.

Although it has yet to be confirmed, a successor to today’s S8 is set to run a powered-up version of the 4.0-litre turbo petrol unit used by the 4.0 TFSI. It will develop around 542bhp, 22bhp more than the outgoing model. The same engine is already used by Audi’s Volkswagen Group sister company Porsche in the latest Panamera Turbo. 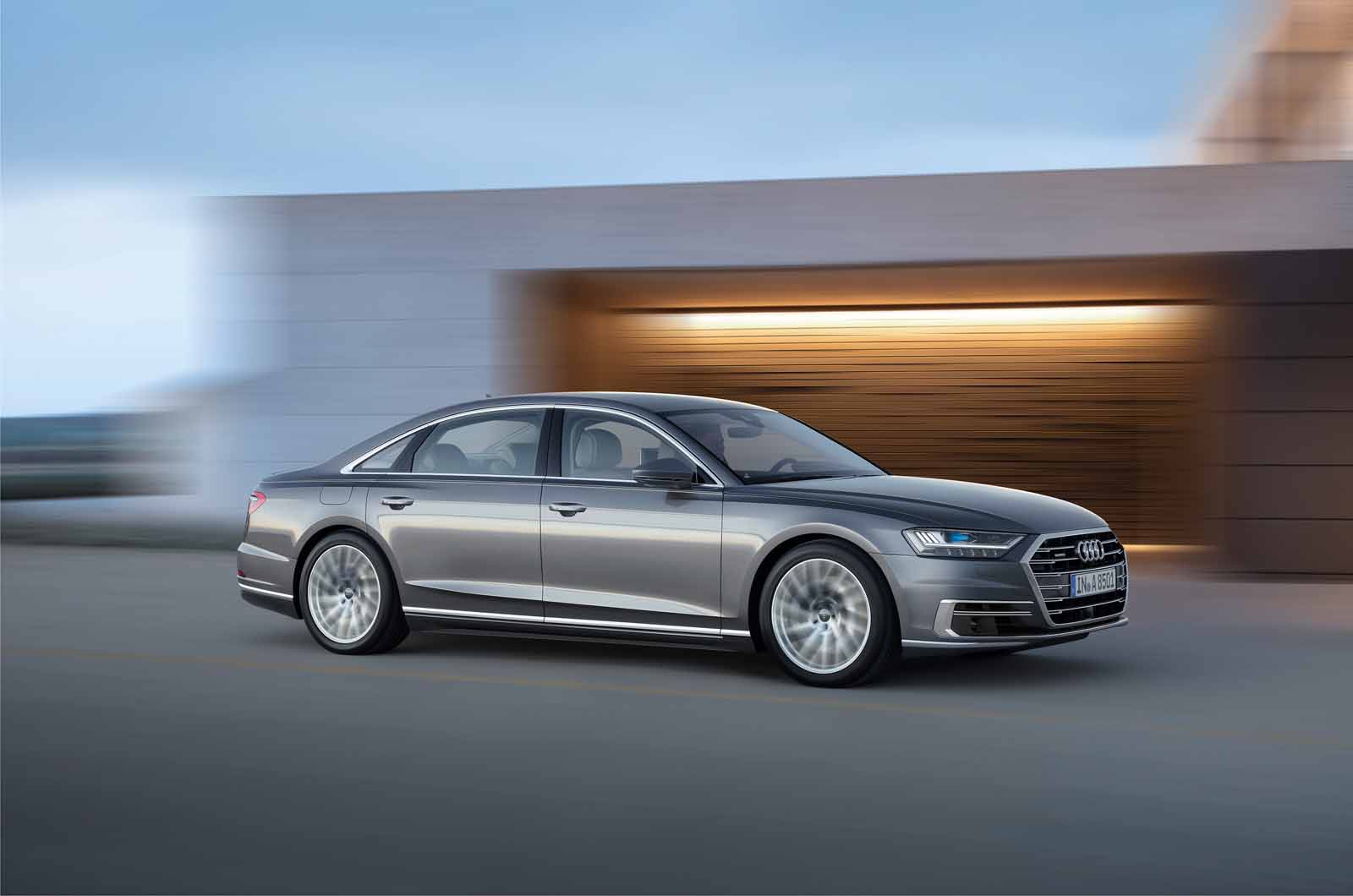 An L e-tron variant is also planned. It will combine the 3.0-litre turbo petrol V6 with an electric motor for an overall system output of 443bhp. Audi claims an electric-only range of up to 31 miles and plans to offer the new model with an optional inductive charging system for wireless recharging of the 14.1kWh lithium ion battery, which is sited in the boot floor. Alternatively, the battery, which consists of 104 individual cells, can be charged using a standard plug-in cable at either 3.6kW or 7.2kW. An 80% charge is achievable within two hours at 7.2kW, Audi says.

Underpinning the A8 is new aluminium-intensive suspension, with double wishbones up front and a five-link set-up at the rear. Air springs are standard and allow four different ride heights.

The A8 can also be specified with new active suspension. Similar to the S-Class’s Magic Body Control system, it uses cameras mounted within the windscreen to scan the road 18 times per second and then alter the damping and spring characteristics for each individual wheel.

A further development is the appearance of all-wheel steering on selected new A8 models. Already used by BMW on the latest 7 Series, this aims to heighten the responsiveness and overall dynamic character of the A8.

Together with the Traffic Jam Pilot, the suite of artificial intelligence autonomous driving functions available for the new A8 also includes a so-called Remote Parking Pilot and Remote Garage Pilot — both operable from outside the car using a smartphone.

How the Audi A8 all started

The first-generation A8, which arrived in 1994, was born from the V8, Audi’s first foray into large cars beyond the A6. Allowing it to compete with the Mercedes S-Class and BMW 7 Series, the flagship V8 model was the first Audi to combine its quattro system with an automatic transmission.

It's good to see that Audi hasn't forgotten the past when it comes to it's "new" look. The 1997 A6 was a styling classic when launched, so that gets recognised in the glasshouse, the lipped boot lid from the 1994 A4 makes a return as do the joined up tail lights from the 1999 Seat Toledo. It looks so slab sided though, it appears to weigh at least 3 tonnes! Just do a cut and paste of the grille and head/tail lights, stick them on the current models and then you've got the next generation Audi range.
Spanner 12 July 2017

...I am not in the market for such a car. The autonomous tech is to protect you from nodding off while driving such a dull machine.
mx5xm 11 July 2017

The exterior design doesn't move the game forward in any direction. More bland than anything else. The Mercedes S-Class may have become a bit of a Russian doll, but it still exudes a certain class and high end quality, this A8 does not. Shame.
View all comments (29)