BACK TO ALL NEWS
Currently reading: E-scooters: 10 reasons why you SHOULD buy one
UP NEXT
First drive: 2022 BMW XM prototype

Throughout history, humankind has evolved and prospered by asking the biggest questions. How can we make fire? What’s on that island over there? What if we stay here for a while and grow crops? Why do apples fall from trees?

Now comes another zinger: should I get an e-scooter? As with any of life’s great questions, even in this age of circular social media certainty that ours is the One True View, common sense demands we should examine both sides of the debate. Here, in squabbling-twin articles, Move Electric’s Gary Parkinson examines the pros and cons.

Remember, Jedi, your decision is always your own - but if you want to take an all-encompassing view, don't forget to also read our article E-scooters: 10 reasons why you shouldn't buy one, and take particular note of the legalities of using one on public land.

10 reasons you SHOULD buy an e-scooter

Many are the reasons for joining revolutions. Listed below are some of the strongest cases for joining the e-scooter caravanserai. Whether you nod along enthusiastically or pull each point to pieces is up to you.

Not as in the colour – although some are, like the very verdant Lime e-scooters available to hire in London and Milton Keynes. No, the big idea with e-scooters is that they tempt us out of our gas-guzzling, planet-throttling cars and into the open air, powered by this 'electricity' thing that everyone’s so excited about.

The International Energy Agency notes that 24% of carbon emissions come from transport, so we should all do what we can to chip away at that. Lime’s chief exec, Wayne Ting, says: “The average scooter or e-bike ride is less than 5% of the carbon footprint of a car ride.” No bad thing.

Remember fun? In this plague-blighted, economically uncertain, conversationally fractious age, it can be hard to recall a time when we did things that sparked joy (and no, we don’t include folding laundry).

But hopping aboard an e-scooter, hitting the 'Go' button and whizzing along with the wind in your hair is an instant hit of exhilaration, a small victory over the mundane everyday, two defiant fingers in the face of misery. The worries of the workaday world evaporate as you nimbly nip towards your destination, an accelerating escape bubble in which Zooming is replaced by zooming. And frankly we’re all for that.

Now, this might seem like a combination of barrel-scraping and obvious-stating, but it is the very raison d’être of the e-scooter. True, some early adopters might wish to appear cutting-edge, or to (literally) stand out from the crowd, perhaps with an artfully sculpted hairdo à la mode. But for most of us, we’re trying to get somewhere, and the e-scooter’s nippability is its main sales point.

Even at the 15.5mph limit mandated by the current government hire trials, that’s something like four times the speed of Shanks’s pony, unless you’re going to do that whole Olympic speed-walking thing with the elbows and the hips – and even those guys average only 7.7mph, according to American Journal of Sports Medicine (who, you imagine, would know).

4. They make you rather exotic

You may or may not wish to appear European, and we couldn’t possibly comment on that (see: 'conversationally fractious', 'circular social media certainty'), but how about being a bit Californian? Folks on the Continent and way out west have been zipping around on these things for yonks, and it can’t be denied that e-scooters add a frisson of excitement to other people’s lives. Look! That scooter’s moving without that person putting any effort in whatsoever!

You can reduce bystanders to an elementary level of plane-pointing wonder – and possibly, for bonus points, sharp intakes of breath – as you whoosh past on your 21st century horseless carriage. There’s a reason ‘pedestrian’ is a pejorative adjective.

We don’t know where you live or work – but do you? Have you explored its every cranny and nook? Maybe there’s a park you never knew existed, or a coffee shop where a beautiful barista makes the sort of cappuccino that could make a monk renounce his vows.

Thing is, we all adopt little rat-runs: shortcuts from station to workplace, logistical snake-chutes that save us time but cost us our soul. With more mph to hand, how wonderful to have the time to dive around a new corner, to look up and around, to savour a new experience. 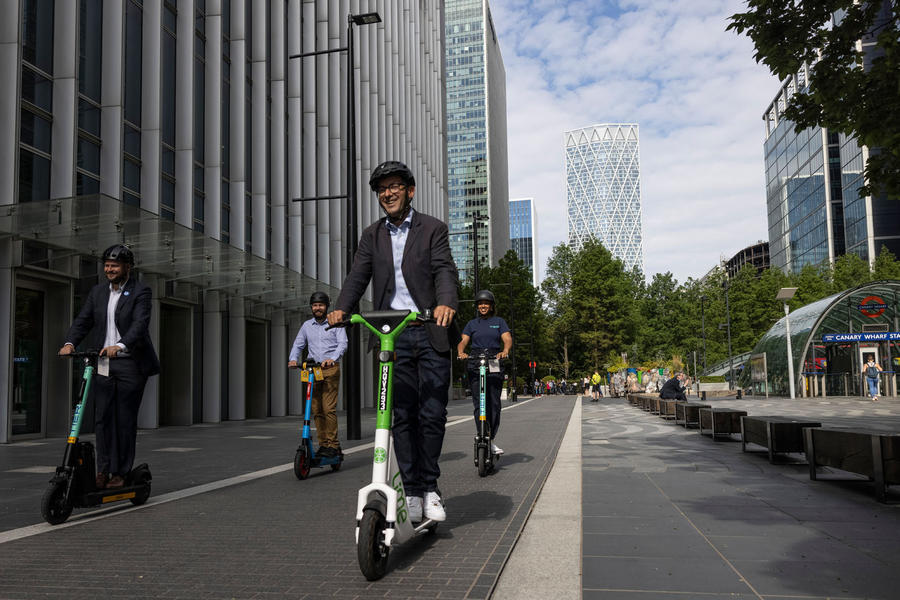 E-scooters are the easiest method of urban transport. Well, possibly excepting walking, for which most people already have the necessary equipment installed, but, as we said before, it’s sloooow. Bikes are a closer comparison but bikes are bulky – especially those expensive ones that fold down into a small art exhibit.

Sorry to break this bluntly, but bikes also make you sweaty. You don’t have to be a Lycra-clad corner-swinger to get a bead on with the effort of cycling. Try jumping straight off a bike and into a meeting and see how your career goes.

Here’s another thing about bikes: very nickable. Very. And even if they’re locked up on the high street while you pop into a hostelry, there’s usually some herbert who’ll delight in bending your back wheel or nicking a tyre. Tough world out there.

Good, then, that the e-scooter can be safely and unobtrusively stashed indoors, without taking up an entire wall or room like posh push-irons do these days. (“I moved in with you, Christian, not your £10k carbon-framed Specialized. Time to decide: It’s me or the bike. Wait, why are you putting your helmet on?”)

8. It could earn you a pay rise

Stuck in a dead-end job? Underachieving at work? Then escape in your lunch hour. Take a brain-break and expand your horizons; hop on a scooter and find a different world. Maybe there’s an art gallery nearby, or a quiet riverside area, or a marvellous bookshop. Or, for that matter, a really good pub.

By hugely expanding the area, you can cover in a lunch break, your e-scooter might just change your life. Buoyed by your noon-time experiences, you can bounce back into work refreshed, receptive and productive. Praising your new-found enthusiasm, your boss will soon be handing over sackfuls of pay rise. Cheers, e-scooter! 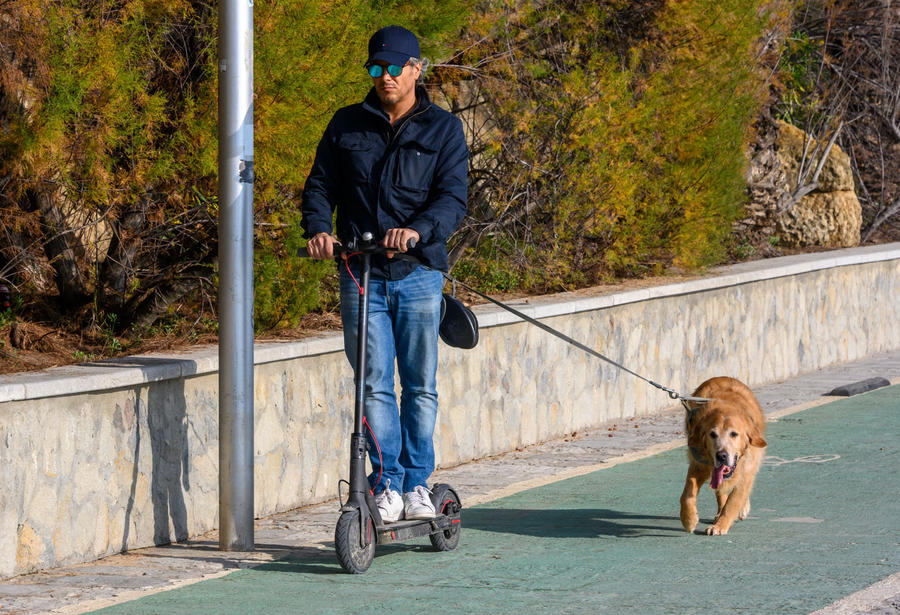 9. It could improve your diet

We’ve all been there. After a hard day’s work, the temptation is not to cook something healthy from scratch, as we know we should, but to fall face first into freezer food or dial up the Deliveroo.

However, with our new-found work-based zest – not to mention the time saved on the commute home – we can finally crack the spines of those recipe books bought by slightly worried relatives. And if we’re an ingredient short? Well, that loathsome five-minute walk to the shop is now a two-minute zip on your e-chariot. To the vegetable aisle!

10. You could get a bigger house

No, really. In both urban areas and commuter zones, it’s axiomatic that the further you live from a transport node (a station, in another words) then the more your house price drops. Indeed, a Nationwide analysis in 2019 suggested that being within five minutes’ walk of a Tube stop makes houses 9.4% more expensive than similar properties that happen to be a mile away.

Now, on your whizzy wheels, a mile is nothing. Even at a fairly sedate 12mph, it’s, funnily enough, five minutes. On average, the Nationwide analysis revealed an eye-watering £43,000 difference. That’s money in your pocket, mate – or alternatively, perhaps an extra bedroom?

Want to balance this ying with some yang? Don't forget to read E-scooters: 10 reasons why you shouldn't buy one

Are e-scooters legal in the UK?

I'm absolutely astounded that a motoring magazine can think of let alone publish an article like this. It is an INSTANT six points on your driving license if you take one of these illegal contraptions anywhere on a road OR pavement. What were you thinking in publishing this?!

They are illegal to use on both the pavement and the road,under UK law. So what is the point?

So that huffpost woman got a job at Autocar rather than heading up BBC news?

Because that's the level of this moronic piece of bilge.