BACK TO ALL NEWS
Currently reading: E-scooters: 10 reasons why you SHOULDN'T buy one
UP NEXT
Handling by Lotus: revisiting the Kia Elan in 2021

A run-in with the law, a lorry or the fashion police are among the potential downsides to consider before buying an e-scooter
Share
Close
Share story

There comes a time in every person’s life when, faced with an intractable quandary, the only recourse is the Ask The Internet option. How do you get red wine stains out of a white carpet? Why’s my washing machine flagging Error F06? Hang on, why isn’t the wi-fi working?

And here, trundling down the highway of technological progress, comes another toughie: should I buy an e-scooter? Most people will have an opinion – they seem to, these days – but in the interests of balance, which is quite important on a scooter, Move Electric’s Gary Parkinson has assembled the arguments both for and against in a pair of linked articles.

Thinking positive and want to read more? Here's 10 reasons you SHOULD buy an e-scooter

10 reasons you SHOULDN’T buy an e-scooter

Far be it from us to decry the advances of technology, but various reasons are put forward to avoid e-scootz, and it’s neither cynical nor Luddite to address each in turn. So let’s see.

This is, it must be said, A Bit Of A Blow. Actually, they’re not illegal to own, and on private land (with permission), you can whiz about to your heart’s content – but public use is a very different matter. Her Majesty’s Government has classified them as 'powered transporters', thus banning them from pavements and pedestrian areas (Highway Act 1835), footpaths (Road Traffic Act 1988) and cycle lanes (RTA 1988 again).

You could technically ride them on the road, but gov.uk warns that you would then require “insurance; conformity with technical standards and standards of use; payment of vehicle tax, licensing, and registration; driver testing and licensing; and the use of relevant safety equipment,” which Whitehall gently suggests you might find “very difficult”.

For the record, mobility scooters and electric wheelchairs are exempt from these bans, which shows that governments can bend; but as of now (summer 2021), your options are not so much limited as vanishingly rare. 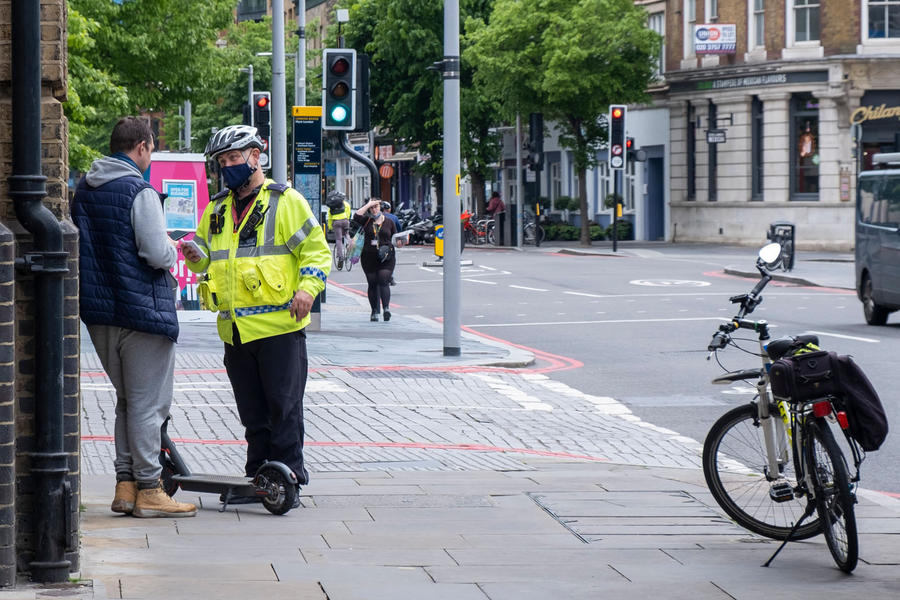 2. They could hurt you

While government-trial hire e-scooters are limited to 15.5mph (12.5mph in London), several models on the market can easily top 40mph or 50mph and one is said to be capable of 75mph. Clearly, this is risky, and not just because crash helmets are optional. A 2019 US study found that 45% of resultant injuries were to the head, 27% “upper extremity fractures” (ie broken arms). Coming off at any decent lick could easily make you an unwanted burden on the NHS.

There’s also the possibility the lithium ion battery could burst into flames. This has happened, hundreds of times, according to the US Consumer Product Safety Commission, with many of these incidents available for compulsive viewing on YouTube and TikTok.

3. They (ie you) could hurt someone else

Although not the only quiet mode of transport – cyclists can reach a fair speed without much aural warning – e-scooters have a rarity value that often surprises pedestrians, including road-crossers, many of whom have consequently found themselves mown down.

At worst, this has led to tragedy. At best, this is still suboptimal if they happen to have fists like hams, or are a lawyer who can transmit that anger into action. Hire scooters have in-built public liability insurance; your private model doesn’t.

Some e-scooters are also somewhat lacking in the boring but important areas of visibility, headlights, indicators and horns – useful for alerting and avoiding others.

Not in your current sartorial choices (a little bold, perhaps, but don’t ever let anybody stop you being you). No, there’s no escaping the fact that, just as with early adopters of the bicycle, mobile phone and Sinclair C5, those who clamber aboard an e-scooter must risk hoots of derision from bystanders cloaking their fear and envy in vocal antipathy.

On this, your correspondent writes from personal experience, having wazzocked around the streets of London on an e-scooter for a Move Electric feature. True, perhaps it was the hi-viz jacket or the sk8ter-boi helmet, but members of the public seemed overly interested and amused. It’s not for the shy or easily disheartened.

Motorised scooters have been around for a century – the Smithsonian Museum cites the 1915 Autoped as “the true ancestor of the modern motor scooter” – and have always been aimed at grown-ups. However, it cannot be denied that their powerless push-along peers have found a much wider user-base among the under-aged.

It should also be noted that children tend to come in two flavours: those of primary age, generally regarded as cherubic; and those of secondary school age, commonly seen as demonic. Because of this dichotomy, adults spotted on scooters will be presumed to be either simpletons or members of a county lines gang. 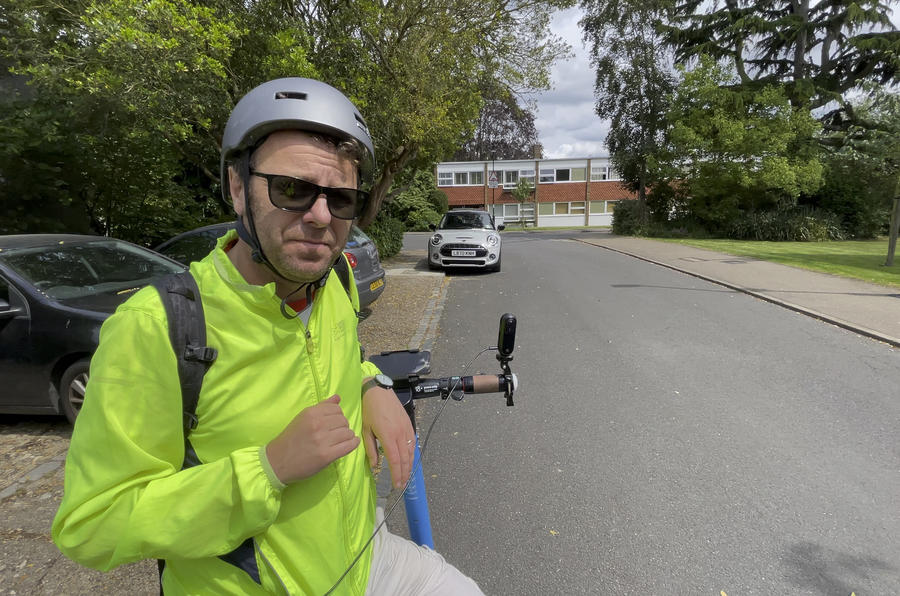 Fear not, they won’t leak your financial details onto the dark web. The problem with scooters is that their basic shape doesn’t offer an easy route to locking them up. Unlike with bikes, there’s no frame presenting a thief-proof way to attach chassis to road furniture, and you can’t get a decently girthed chain through the wheel.

Sadly, what is not very lockable is therefore nickable, and your chariot is thus all the more attractive for the Fagins de nos jours. Furthermore, most e-scooters don’t have lockable ignition, the more typical starter-button mechanism allowing the chancers to cackle off into the moonlight. And even if they can’t start it, they might be tempted to chuck it in the river.

7. They’re not the best workhorses

Like the horses that came before them, bicycles can help you carry large loads: panniers on either side, mimicking cowboys’ saddle bags, will distribute the weight evenly enough for the bike to deal reasonably well with the wobbles, even after a supermarket sweep.

Scooters offer no such logistical assistance. You could fill a backpack or, more precariously, a rucksack, but the resulting balancing act may not be endorsed by your physician or insurance provider. Just as e-scooters aren’t built for the long commute, they’re also unsuited to the heavy lifting. 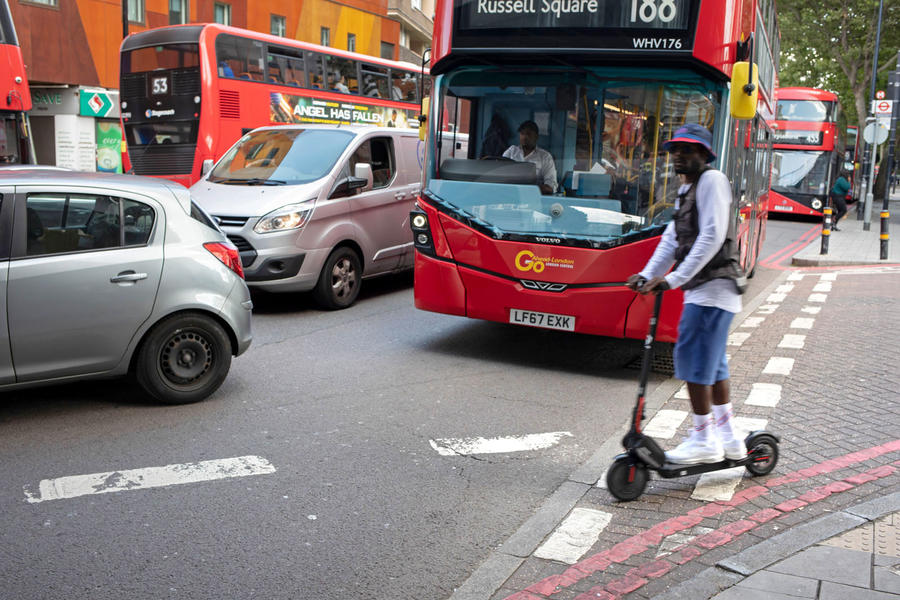 There’s no doubt we have to clean up our act, and moving over our motive power from fossil fuels to electricity is a big part of that. But is your e-scooter actually that green?

True, you won’t be pouring petrol into it. (Please don’t.) But the electricity that recharges its batteries doesn’t fall out of the sky: how much do you know about how renewable your energy supply is? And what is that battery made of? Usually, it’s a lithium ion battery stuffed with rare metals dug out of the ground in South America and transported – not by fairies or goodwill, but by dirty fuel – to China, the US or Europe.

And what happens when the battery ends its lifecycle?

We all know the sell, and it’s daft to disagree: e-scooters are a better method of short-to-medium-range transport than planet-throttling cars, thus making our cities and our atmosphere much more hospitable.

But let’s face it: humans are inherently lazy. Rather than replacing your dirty old car on those journeys, e-scooters are perhaps more likely to replace your rapidly fattening legs on short hops across the city, the sort you used to walk (or perhaps cycle). Few of us get enough aerobic exercise as it is; offering a labour-saving device may still further harden our arteries.

10. It’s you versus the lorries

Given the sector’s increasing popularity and green credentials, not to mention the toe-dipping exercise that is the hire trials in various burghs of our green and pleasant land, it’s reasonable to expect that the government will at some point loosen the law on using e-scooters.

But e-scooters are largely the province of the young, and no government is likely to enrage the increasingly dominant silver-haired slice of the electorate by allowing e-scooters carte blanche to power along pavements.

In short: you ain’t going on the pavement, but you might be on the road. And really, do you fancy your chances against a lorry?

Don't forget, it's not all bad news: here's 10 reasons you SHOULD buy an e-scooter

This is one of a series articles being published by Autocar over the coming weeks exploring e-mobility under the Move Electric name, a new editorial channel created by Haymarket, our owner. We intend to cover electric cars, motorbikes, scooters, bicycles and more, as well as exploring themes around electricity generation and electric lifestyles. Content will include features, reviews and opinion. If you have any thoughts about what kind of content you'd like to read – or wouldn't like to read – please use the comments section below to provide feedback.​

Airspeeder: 8 things you need to know about the race series for flying cars… that aren't cars

Reasons to buy an e-scooter: 'they're green'

Reasons not to buy an e-scooter: 'they're not green'

Most of those reasons could be directed towards a car or bicycle.

Why are they even trialing these things in London and Milton Keynes? It'd appear we're more interested in hugging trees than our own safety.