BACK TO ALL NEWS
Currently reading: Martin Brundle: how to get Formula 1 back on track
UP NEXT
2024 Mercedes C-Class EV spearheads brand's electric rebirth

Martin Brundle: how to get Formula 1 back on track

Formula 1 fans in 80 countries are missing Martin Brundle. He’s missing them too, so much so that he swears he’ll never again complain about having to stand in airport security queues on his way to lead Sky Sports’ worldwide coverage of a grand prix season.

As arguably the most authoritative pundit in the world of F1 – who drove 158 grands prix, raced Ayrton Senna and partnered Michael Schumacher in his pomp – Brundle has already enthusiastically signed up to cover every 2020 race that can be squeezed into an abbreviated season. Chance would be a fine thing…

We’re chatting shortly after F1’s authorities issued their latest proposal about starting the 2020 season: behind closed doors at the Red Bull Ring in Austria on 5 July. It has since been confirmed that the season will start with two races in Austria, followed by six more races in Europe – including a double-header at Silverstone in August.

When we speak that's not yet certain, but speaking from his home in King’s Lynn, Norfolk, Brundle, who has never been an F1 yesman, gives the plan an enthusiastic thumbs-up. “It’s great,” he says. “The sport has been needing a template it could work with. I’ve been talking to team bosses who reckon it will take three to five weeks just to get factories running again. And there’s a whole load of logistics to go through. How do teams travel? If they do, can they come home? Will people need virus testing? What about PPE? It’s definitely time to get started on this stuff.”

Brundle particularly likes the idea of going to Austria first, because it gives F1 the chance to “control its own train set”, as he puts it. “The circuit is owned by Red Bull,” he explains, “one of F1’s biggest supporters. There won’t be any issue of crowd control and there’s a large military airfield right next door. Some people think the lack of spectators might make things seem a bit half-hearted, but my sense is that people – teams and spectators – just crave normality. They know there’s no substitute for real racing.” 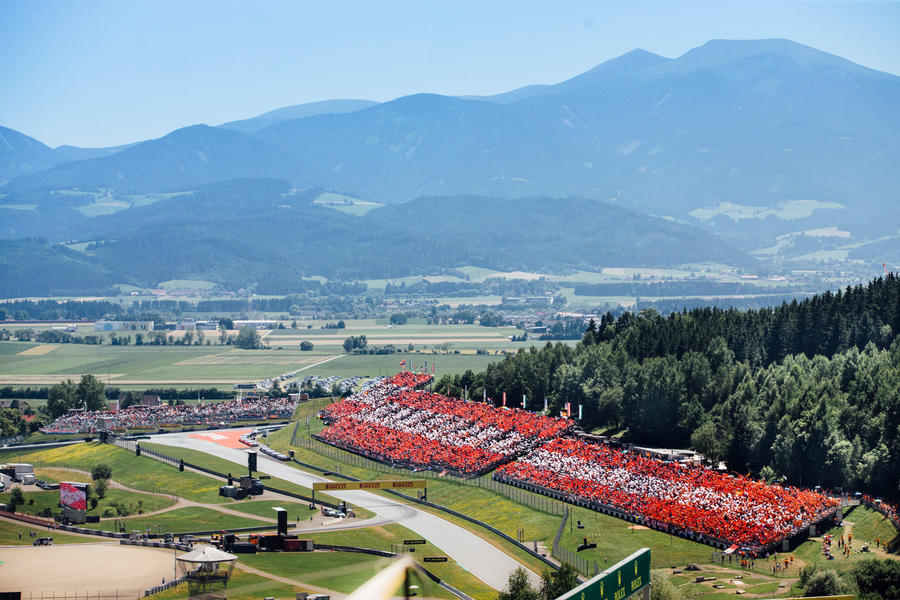 Much of Brundle’s appeal as a pundit has always been his optimism; the sport is not perfect, but it’s better than any alternative and, whatever the faults, he loves it anyway. He doesn’t believe there will be any enduring damage (“F1 has a rich, 70-year history to trade on”); in fact, he reckons the current turmoil might bring benefits. “We’ve been heading in the wrong direction for a while,” Brundle declares, “by having rules that allow teams of 1500 people that only produce two identical cars a year. It’s not sustainable. “Besides, there are other priorities. As [legendary F1 commentator] Murray Walker said to me the first time we ever worked together: ‘Just remember, Martin, we’re only here to inform and entertain.’”

Brundle took that advice to heart and believes it more fervently now. “If we don’t entertain and make the sport sustainable,” he says, “we won’t continue to have the manufacturer and sponsor support we need. Maybe this pause will encourage us to stop squabbling over details and face the big questions. What’s F1’s purpose? How do we meet the electric-petrol-diesel challenge? How do we stay relevant?

“On sponsorship, we’ve got to give decision-makers every reason to stick with us. At the moment, there’s very little downside to a sponsor pulling out – not the way there used to be. In some quarters, it’s almost viewed as a pragmatic decision. We’ve got to make it easy for people to stay in, to help them understand that we still have a mighty business, bigger than anything but the Olympics and the [football] World Cup, that in normal times runs for most of the year.” Another benefit of this unplanned pause, says Brundle, is that the rules freezes and cost caps hastily adopted for 2020 might level the playing field and allow lesser teams to do better.

But you can’t expect top teams to police themselves. “These are successful people, greedy for success,” Brundle observes. “Most of them can’t see beyond their own unfair advantage. But currently, if a race is dry and there isn’t a series of safety cars or yellow flags, the top three cars will lap the rest. If that control can be broken, maybe in 2020 the fans will be the winners…” 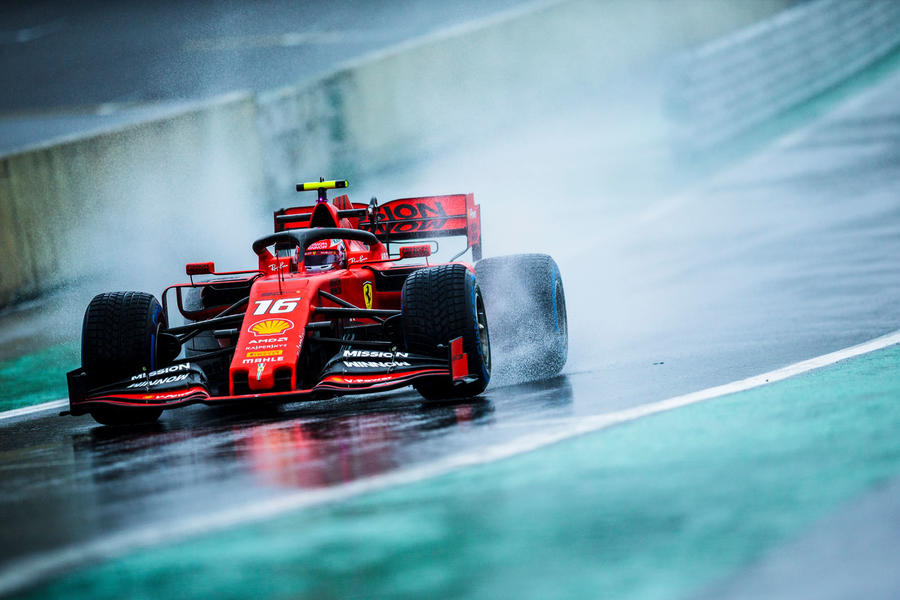 We talk Ferrari: people are criticising the Italian team for its reluctance in agreeing cost cuts. But for Brundle, it’s not black and white. “It’s true that the leading teams, Ferrari and Mercedes, spend £300 million on the same season’s racing that costs Williams and Racing Point £100 million,” he says. “And you couldn’t honestly say that what Ferrari does is three times better than Williams.

“But before you condemn Ferrari, you’ve got to walk a mile in their shoes. They supply Haas and Alfa Romeo [with powertrains and other components]. They construct a lot of stuff others don’t, so they have higher costs. They’re also fighting against the pain of releasing 400 or 500 people [due to the planned budget cap], which is understandable.

“But maybe it’s not as painful as having three fewer teams on the grid. If we don’t find a way to curb these huge team structures, the whole thing could go bang.”

Question: would Bernie Ecclestone have been more effective at handling the problems F1 is facing today? Brundle notes that Ecclestone has enjoyed taking potshots from the sidelines while the new management has taken time to decide the way forward, but he doubts Ecclestone would have been anywhere near as considered in his actions.

Ecclestone and CVC Capital (F1’s previous owners) were brilliant at making money, he explains, but they did very little to embrace the digital age, as Chase Carey and Liberty Media (via its spin-off Formula One Group) are now doing. In any case, the “dictatorial and slightly scary” approach taken by Ecclestone and Max Mosley to build F1 could never work in today’s environment of transparency and correct corporate governance.

“Bernie was very quotable, but Chase is less so,” says Brundle. “What F1 could use is an entrepreneurial racer figure facing forward, backed by a really clever but not-very-vocal businessman at the rear.” 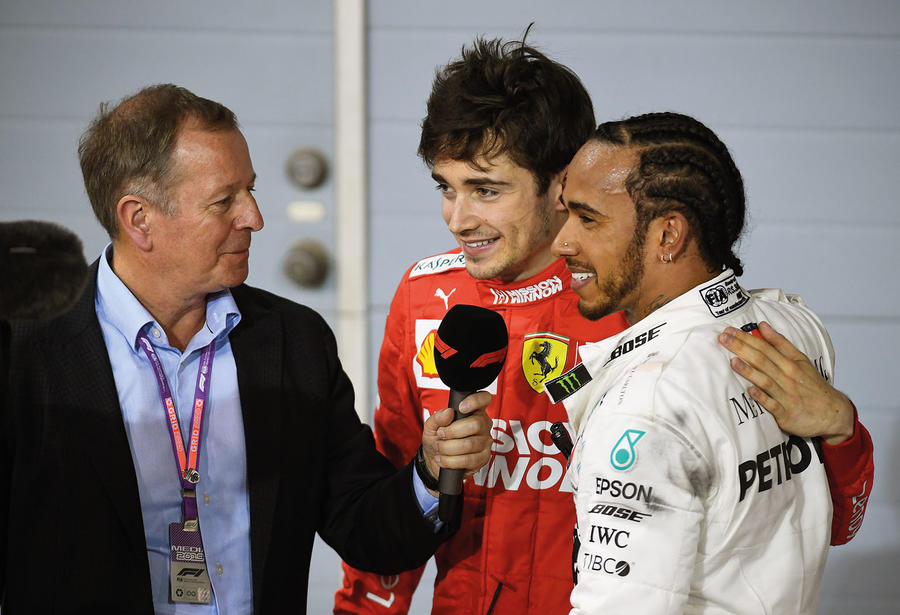 Brundle notes that while the F1 Group numbers have burgeoned quickly, the organisation still lacks the charismatic spokesman it needs – although he praises Carey and Co for committing more than $1 billion to developing the sport, a sure sign they’re in it for the long haul.

What other positives does Brundle expect from this season? He’s looking forward – as he says he always has in 36 years of driving in or following F1 – to the emerging stardom of a new crop of young drivers like Max Verstappen, Lando Norris, Charles Leclerc and George Russell. He’s delighted that Esteban Ocon is back in the mix, too – not that this is the ideal year for new talent.

“Given the tragedy that surrounds us,” says Brundle, “it doesn’t feel quite right to be dealing out sympathy to a bunch of F1 drivers. But I do feel a bit sorry for members of this younger group whose chances may be reduced if teams stick with ‘safe’ drivers in tough times. But I still think we’re going to discover whether anyone can come close to knocking King Lewis off his throne.”

Above everything, Brundle feels pangs of the familiar old excitement as the beginning of this fractured season closes in. He would still hate to be anywhere else. It will be a torrid series, he admits, but holding double-header races at least sometimes is “a no-brainer”. It’s the only way to stage the 15 or 16 races needed to trigger the sponsorship and broadcasting agreements that hold F1 together.

“I’m fine with consecutive weekends of racing,” he says, “and with double-headers at various circuits. I’d even be up for starting cars the second time in the reverse order of their first-race finish. That might be just the kind of ingenuity we need for F1’s new look, and this could be the right season to give it a try.” 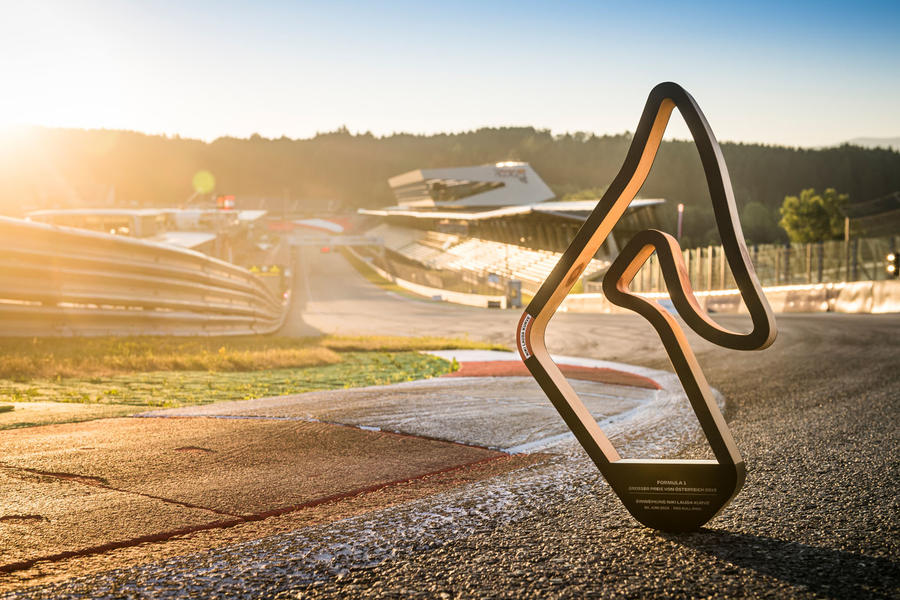 Just look back to when it was

Just look back to when it was at its most popular and replicate that!?!?? and get rid of that bellend hamilton
Peter Cavellini 6 June 2020

Like most top sports, the actual sport is a by product, I honestly can't see why F1 is ignored so much, what does Football, Cricket, Baseball to name three have, that round the World go gaga when it's televised?, where's the difference?

Like most top sports, the actual sport is a by product, I honestly can't see why F1 is ignored so much, what does Football, Cricket, Baseball to name three have, that round the World go gaga when it's televised?, where's the difference?

The difference is they are relatable, they are inclusive.  You don't need rich parents and the best most expensive equipment to win - simply talent, determination, hard work, and natural ability.  They offer unmatched human feats, be it strength, agility, speed, coordination, stamina, or a combination of all of the above.  Only the very best can make it to the very top, but almost everybody in the developed world (and many outside the developed world) is given the opportunity to have a go and succeed.  Many help develop the values of teamwork and comradeship.  They make better people of those who play them, at any level.  In other words, the extremely popular sports you mentioned are Real Sports.  Driving a car around is not.

why do the fastest cars on the grid have to go out for all 3 sessions? it's a waste of fuel, powertrain mileage, tyres, brakes, and they could get in to a crash. A few seasons ago I said they should scrap quali and have the grid determined by the previous race's finishing positions, so the whole season ran continuously