BACK TO ALL NEWS
Currently reading: Formula Offroad: up close with Iceland's most extreme motorsport
UP NEXT
Tesla to expand select UK Superchargers to other electric vehicles

Formula Offroad: up close with Iceland's most extreme motorsport

Off-roading is illegal in Iceland. Seriously.

It could cost you £2800 and two years inside, because tyre tracks cut into the country’s delicate, lightly grassed volcanic tundra take decades to heal. Unlike, say, the moon or Hollywood Boulevard, no one will hail you for leaving your imprint here.

This article was originally published on 30 July 2016. We're revisiting some of Autocar's most popular features to provide engaging content in these challenging times.

But, wonderfully, there is an exception, and it’s called Formula Offroad.

In this sport, mad machines driven by even madder men battle it out over land and water – yes, over water – to compete for the Icelandic Formula Offroad title.

I heard Choirboy sing at Árnason’s workshop earlier and immediately grasped the severity of the misnomer. It’s a demonic chainsaw of a noise that would give Aled Jones an instant nosebleed. It’s so loud, fierce and guttural that it might have caused that bothersome ash cloud in 2010. The engine is a GM LS3 stroked from 6.2 to 7.0 litres and enriched with a shot of nitrous that triggers when the throttle is mashed. It can make up to 1000bhp and, at 1100kg, Choirboy is a flyweight by Formula Offroad standards, with more power per tonne than a Bugatti Chiron. 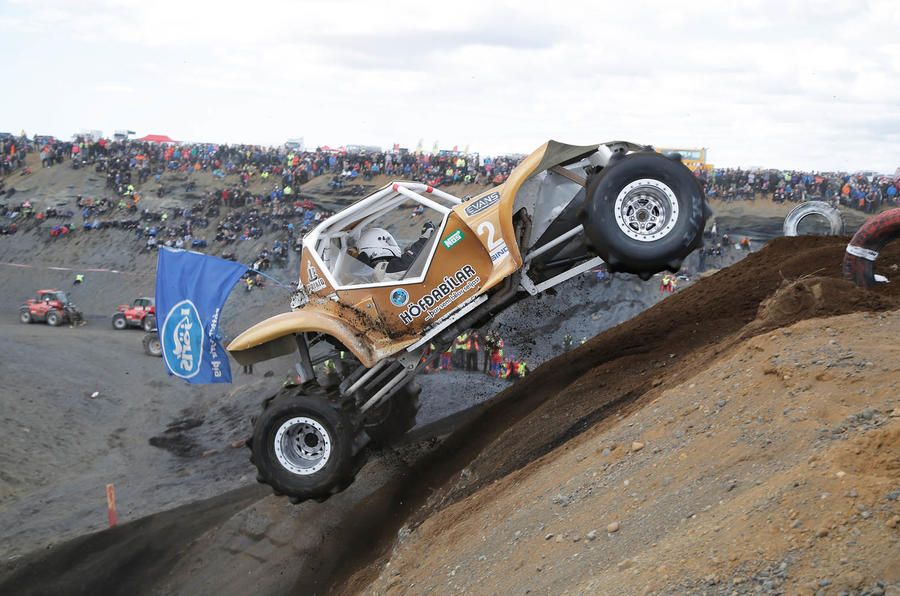 Lively chief mechanic Gummi Gustafsson explains that there’s a high-pressure oil pump to defend against bouts of adverse gravity, and the air intake has been relocated to avoid gravel and dust – although he still scoops masonry out by hand between stages.

The car wears huge ‘super scoopers’ – dragster tyres with giant spades attached to help grapple through sand and clamber over rocks. They run at just 4-7psi and cost £600 each. Choirboy’s arches barely cast a shadow on them.

The tubular steel chassis wears adjustable Fox shocks, with shorter, supplementary units up front for extra compression in extremis. Forklift-sourced steering winds just 1.2 turns between locks, and the GM Powerglide transmission has only two speeds. Torque is split 50/50 between two truck axles, each of which houses a locked differential. Gearing is offset so the front wheels turn a little faster for more responsive steering uphill and a braking effect on descents – “an Icelandic trick”, says Árnason, beaming.

He explains the format: five technical stages and one timed stage on day one, then three technical, one timed, one water and one mud on day two (if you and/or your car don’t expire first). The shorter, sinuous technical stages use one side of the giant, ragged half-pipe that is the gravel pit, with competitors negotiating tight gates and vomitous inclines as they go.

As in a hill trial, the farther you get, the more points you bag, with deductions for clipping gates, stopping or, Odin forbid, reversing. The maximum score is 350 points.

Timed tracks are much longer – up to 700 metres – and more frantic. The fastest man scores 350, his rivals shedding a point for every 0.1sec they lag. The show-closing water and mud tracks are a law unto themselves, but more of them later. 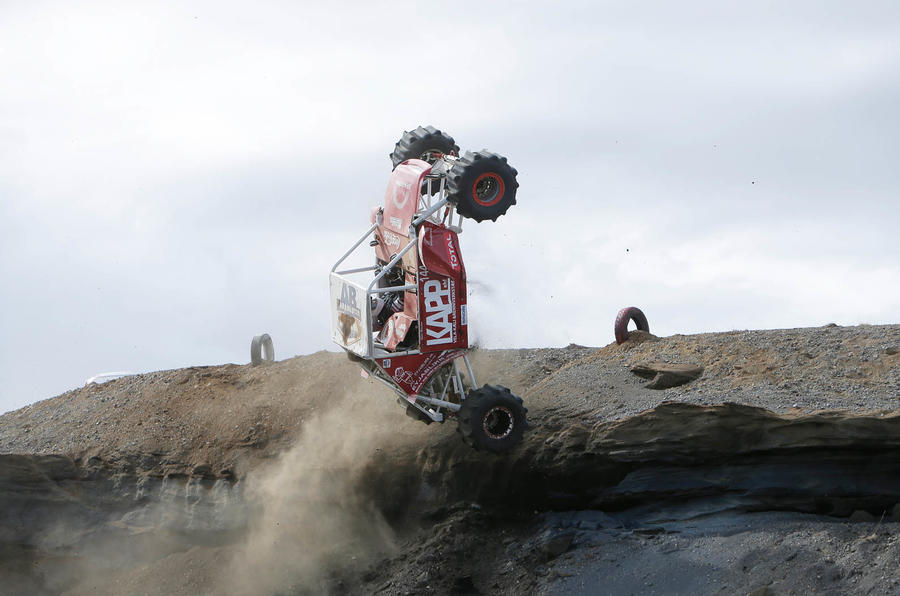 We arrive in Hella to see the action on the first morning. The gravel pit is up to 150m wide and 700m long. There’s a dusting of weary-looking yellow grass along the plain that leads to glacier-filled mountains beyond, but the pit is barren, its sand and boulders weathered into a rusty grey. Its shallowest slopes are about 35deg (the world’s steepest public road is 19deg) and stubborn outcrops of volcanic rock jut horizontally along the rim. This is no lunar landscape; it’s Martian. But there’s no shortage of life.

Thousands of spectators coat the far side of the pit, filling every foothold and ledge like Jawas on Tatooine.

The motley crew of 22 cars assembles. Most use turbocharged V8s, but there are other nitrous-equipped cars such as farmer Bjarki Reynisson’s Land Rover Series 2-bodied creation, known as The Animal. (His mechanics are The Veterinarians.)

Drawn to race before Árnason on each stage is the 47 car of Olafur Jonsson, champion until our man stole his crown in 2013. Grimsson sets off. He edges over a giant tectonic stub, then creeps down the unthinkably steep slope before an ultra-tight right turn for the first gate. The car slips sideways as the sand gives way, freshly exposed grains of jet black basalt seeping like crude oil from beneath its tyres. The front wheels dig in and the car buries itself.

Somehow, a combination of steering wiggles and gear shuffling sets the car free and Grimsson hurls it back up through the next gate, the blow-off valve chattering furiously.

Then it’s another careful descent, traverse and uphill attack, but this time his right front wheel slams the bluff. The car rebounds violently, pointing skyward before leaving the ground altogether, rolling backwards onto its roof and, eventually, its wheels. The crowd erupts. His run is Formula Offroad in microcosm: multiple bouts of disaster interspersed with skill, power and drama. I like this very much.

Árnason tiptoes off the cliff. The rear differential clatters an outcrop, but when all four tyres touch down, it’s full right lock and the fronts dig in like grappling hooks as a bootful of throttle pivots the back around and he shoots neatly through the first gate. He fires back up and over the crest, powersliding left, peppering several faces – including mine – with stinging volcanic shards. The wall that defeated Grimsson is dispatched with similar aggressive efficiency. 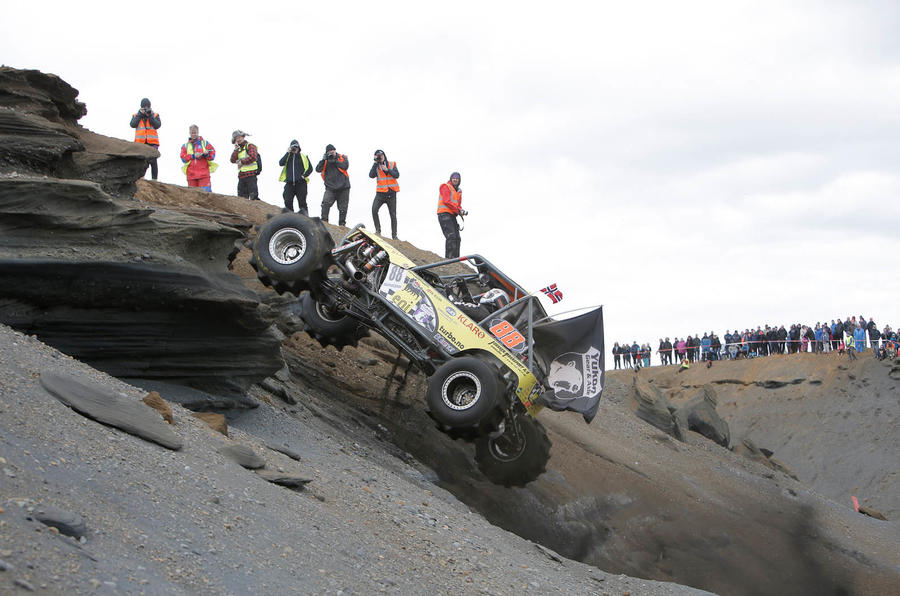 Árnason explained his technique earlier: “The nitrous helps a lot uphill. You need 80% throttle, and when you approach the top, you give it the nitrous. The suspension extends, so when you hit the hill, you get all of the shock. Otherwise, you get steel to steel and bounce backwards.”

And so it goes: Árnason uses the outcrop as a ramp, hurling the car into the air, then landing foursquare on the precarious ledge. The suspension soaks it up, and before gravity can wreak revenge, he guns forwards and across the line, spitting in his wake a thick jet of dark dust that lingers over the valley.

I’m speechless. Terrain you wouldn’t climb without ropes and carabiners has been mauled by a machine, and it’s staggering.

It’s the same throughout the day’s technical stages. Árnason drives beautifully, traction-hunting hands whirling while somehow threading a howling Choirboy through the gates. He’s a crowd-pleaser, too, giving a snarling pump of the throttle as he leaps through one finish line a good 10 feet nearer St Peter.

In the stramash of power and rocks, others struggle. Stricken cars – stuck, rolled, overheated or a wheel short – are forklifted away and frantically repaired.

The teams help each other out while the whole entourage – marshals, crowd and classic rock-blaring sound stack – shuffle along to the next track. Then comes the timed stage, in which the drivers launch themselves off the cliff, race around the valley floor and fly back up the hill.

I watch with Icelandic Motorsport Association president Tryggvi Thordarson, who literally wrote the rulebook. Even he’s shaking his head at the banzai tactics on show.

Alexander Steinarsson over-eggs it in his 91 car. He pitches over the crest and finds himself facing the ground, travelling 25m with the car on its nose, tipped just past vertical. Unbelievably, he lands it. Then the car snaps to the right, but Steinarsson corrects, transitioning neatly into a leftwards drift through the first gate. It’s the most jaw-dropping manoeuvre I’ve ever seen. The crowd goes wild. Árnason drives with typical style and skill, finishing with a delightful uphill drift, but the stage is abandoned because of timing issues. Even so, he hasn’t dropped a point all day – a new record – and leads Jonsson by a couple of clipped gates.

An evil technical stage begins day two, with many failing the sheer final ascent. One car sheds a driveshaft and there’s a 10-minute delay as marshals hunt for it in the sand.

Árnason goes clear but nicks a gate on the second stage, fails to complete the third and suffers a puncture on the timed stage. Jonsson’s fortunes are also mixed, so it’s still tight as they enter the water course. 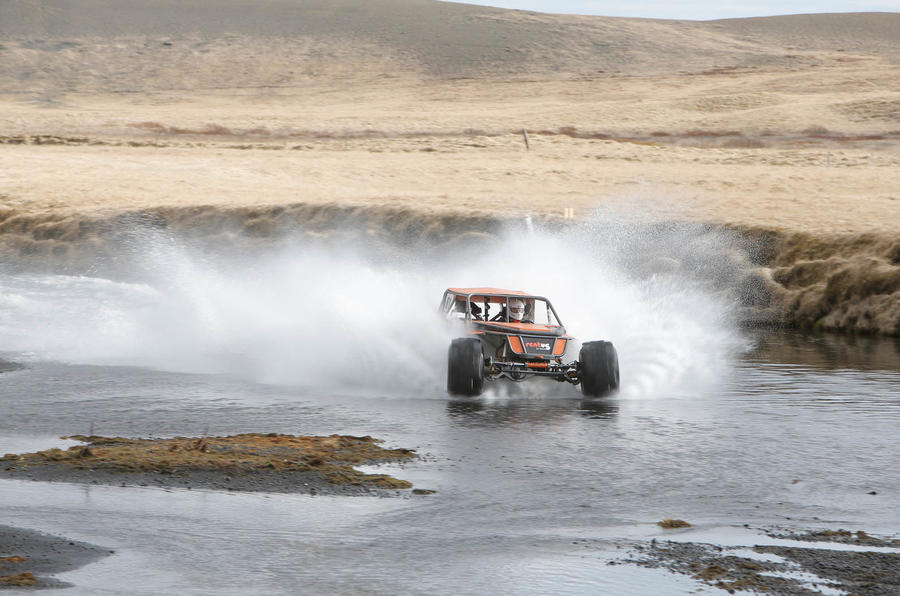 Here, Formula Offroad goes into proper lunatic mode, with a generous sprinkling of slapstick. Suited in plastic, competitors drive across – not through – a 200m-long stretch of river. Yes, these tonne-plus machines go full New Testament and drive on the water, skimming like a stone (a massive, roaring, four-wheel drive stone with a terrified human strapped in).

With his nitrous turned up in preparation, Árnason explains the technique: “You get lined up and just hit it – and hopefully you get over. If the revs drop, you sink. If the intake gets wet, your engine’s ruined.”

Not to mention, if you flip, you might drown…

A small island of gravel halfway up the river has some doubting its depth, but poor Atli Ásgeirsson discovers otherwise as he fluffs his entry and his car trickles into the water before completely disappearing below the surface. Deep enough, then.

Jonsson, however, nails his approach, pointing at the island and pinning the throttle. It’s as if the water has spontaneously frozen over. He scarpers across at 50mph, working the steering wheel to tame the flailing rear, the tyres roaring like jet engines. The gravel patch lends a moment of traction, flinging the car across the final stretch and back onto dry land. It’s a masterly job. With a clear run, though, Árnason can edge to victory.

He makes a shorter approach, but the revs shoot up in time and Choirboy launches onto the water. The car is less balanced than Jonsson’s and its axles start to tramp violently. But the islet provides respite and the car stabilises for the final charge, Árnason showboating with hands aloft.

He confirms victory on the mud course, Choirboy turning from gold to brown in moments as Árnason wrestles it through a boggy field in a haze of vaporised mud.

A delighted Árnason collects his trophy, with Jonsson just 29 points adrift. Win or lose, everyone’s buzzing. It has been a riot for competitors and spectators alike. I highly recommend you go. I’ll see you there. 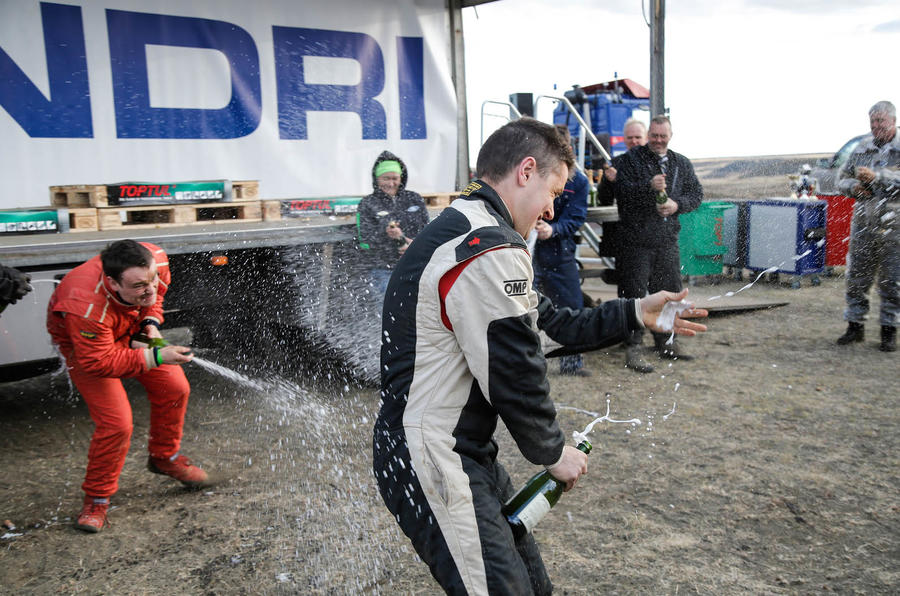 Cars 61 and 90 are unusual for having a passenger seat, and you can spend seven to 10 minutes being thrown around in one of them from £500. They both have nitrous-boosted V8s and are run by a father and son team from Reykjavik.

Unreassuringly, they’re called Zombie and Insane (the cars, that is). See offroadiceland.is for details.

Extreme E: the off-road race series trying to save the planet​

About what was in the article, yes, it looks scary, high adrenaline stuff, but a lot of these competitors must pick up injuries when they fail to reach the top?

Its quite warm in Iselandia.

Indeed the summers there are fantastic. One of the best moments of my life was getting blazed at about 3am and watching the sun rise while playing with a cat named Balgruuf. Iceland is my favourite place.