BACK TO ALL NEWS
Currently reading: 2019 British GP preview: the story of Silverstone's surfacing disaster
UP NEXT
Lotus Emira vs Porsche 718 Cayman

After the woes of 2018, everything is riding on freshly laid asphalt at Silverstone, including this weekend's F1 race
Open gallery
Close

Stuart Pringle can still boast a full head of hair, which is always a bonus for a chap in his forties. But in his case, it’s genuinely surprising. In fact, it’s a wonder his crop hasn’t turned pure white. Running Silverstone is onerous at the best of times, but in the past year the stress has hit new heights – largely because the playing surface at the self-styled home of British motorsport wasn’t fit for purpose.

Last year, Silverstone was resurfaced for the first time in more than 20 years. To say it didn’t go well is an understatement. Formula 1 drivers were critical of bumps at the British Grand Prix, but that was nothing compared with what happened at the MotoGP in August.

Torrential rain, Silverstone’s most persistent foe, left giant puddles of standing water that made the track unridable. Disastrously, the race was cancelled, leaving 50,000 soggy spectators bereft. The inquest was inevitably damning, ravaging Silverstone’s reputation and its already marginal finances. The only option has been to resurface the track again – and this time, get it right. 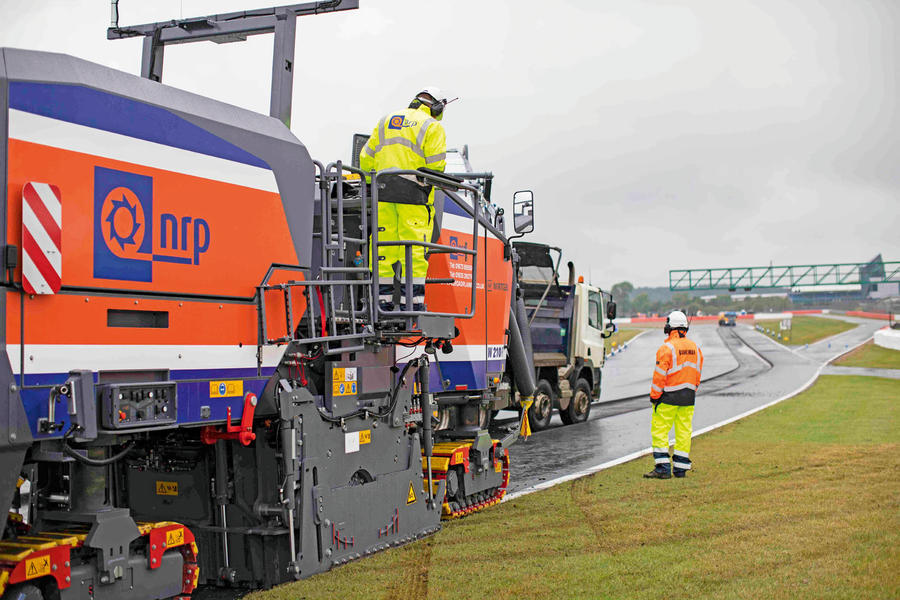 So what has this past year been like, we innocently ask managing director Pringle? Silence. “Long… and hard,” he finally answers. “Actually quite emotional.”

His description is almost a stream of consciousness: “We dealt with the cancellation of MotoGP, of keeping 50,000 customers waiting for five hours in the rain, then refunding them all their money – which we gave them back 100% within 28 days,” he adds, with a note of defiance. “That was a mammoth undertaking. Then we began to investigate what had gone on. We had to get this sorted.

“I feel a sense of responsibility in this job,” he adds with sincerity, “to find a sustainable, long-term future here, for the sport you and I love. Last year should never have happened, it must never happen again and we have to get it right.”

The new surface will be used in anger for the first time at the British GP this weekend, only a little over two weeks since the final layer was rolled. Britain’s climate left little choice but to run to such a tight deadline. This wasn’t like patching up the M6. New asphalt, of a quality superior to the surface on a Heathrow runway, had to be laid in the dry, which meant summer… and in the UK, of course, that’s no guarantee of decent weather. 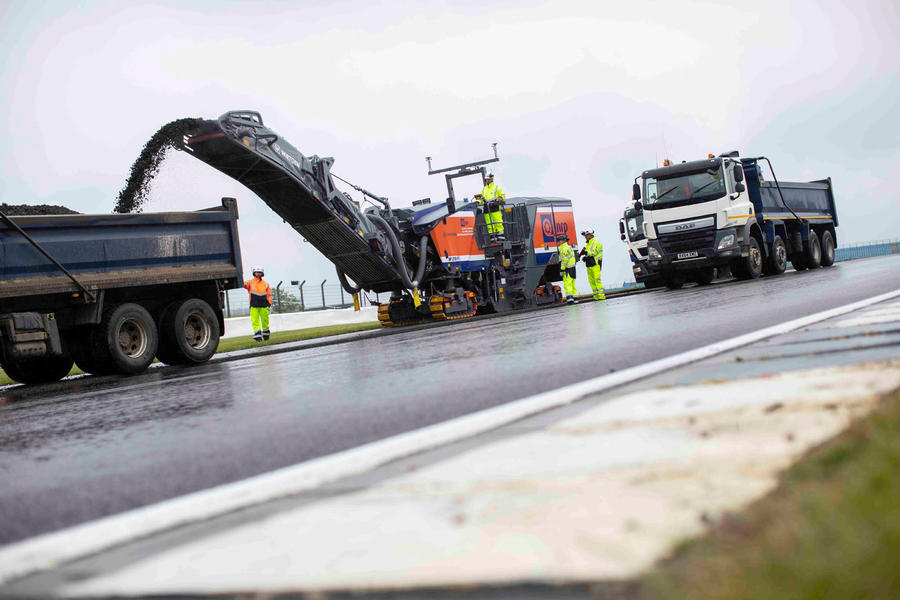 The process began months ago, before Christmas, when Silverstone commissioned Dromo, a circuit specialist run by designer Jarno Zaffelli. The Italian’s developments in surface scanning offered a detailed blueprint of the track’s surface, showing every bump, camber and blemish. Dromo’s expertise is to change circuits without affecting their layout, adding camber and even crowning where required, to improve drainage without altering corner characteristics.

The laying of the surface itself was entrusted this time to Tarmac, the eponymous organisation responsible for much of Britain’s road network – and before you snigger about how poor that is, consider the words of regional director Richard Vine on the challenges his crews face, day in and day out. “At Silverstone, we had full possession of the site – we didn’t have to consider other road traffic,” he says. “It’s our quest to develop automated pavement laying for the road network, but you can’t shut the major arterial routes in the UK to bring this technology to fruition.

It’s usually short, sharp shock treatments. On new road builds we are using this technology, but ordinarily on general maintenance in the UK you have to match what is already there. You have to follow the profile of the road and match it back in with the other lanes. You can make it better, but not as much as we’d like. It’s frustrating.”

For Vine and his team, Silverstone was something else. The process included planing the current surface, then laying three new ones using that cutting-edge automated technology. The top asphalt is a bespoke high-grip mix designed specifically for Silverstone. Created from Shropshire aggregate, it was mixed in two dedicated plants – one in North London and the other in Bedford. 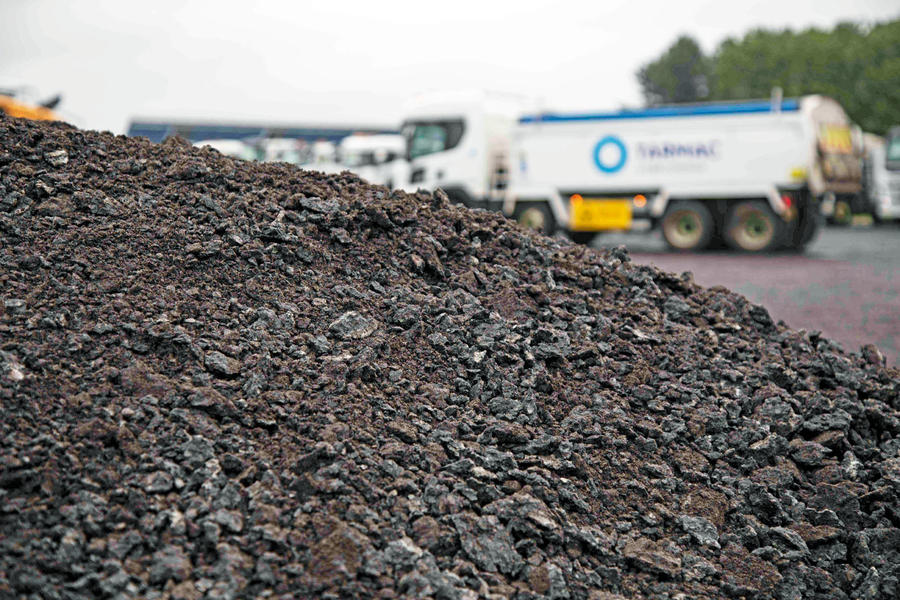 The trouble is once it has been mixed, asphalt has to be laid while it’s still hot. Everything about this process had a tight deadline – and it wasn’t helped by the summer rain that hit the UK in June. A three-week window was allocated, apparently more than enough time to resurface the whole 3.66 miles of Silverstone’s grand prix track. “We had contingency and plenty of float built in,” says Vine. Just as well… “We used all of it,” adds Pringle.

Crews were at least able to plane the old surface in the rain and worked around the clock to do so. These were the best specialists available. “Tarmac went around their business in the UK and pulled together the best gangs, hand-picked the best guys,” says Pringle. “They picked their ‘first 15’.”

Once the weather cleared, three paving machines running in echelon were employed to deliver a joint-free surface across the 15-metre width of the track. “It’s very smooth,” insists Pringle. “Tarmac tell me it is the highest-performance asphalt laid to the tightest tolerance ever in the UK. It exceeds the level of accuracy achieved on airfields, which is normally the gold standard. They have laid it to the accuracy of half the height of a pound coin…” 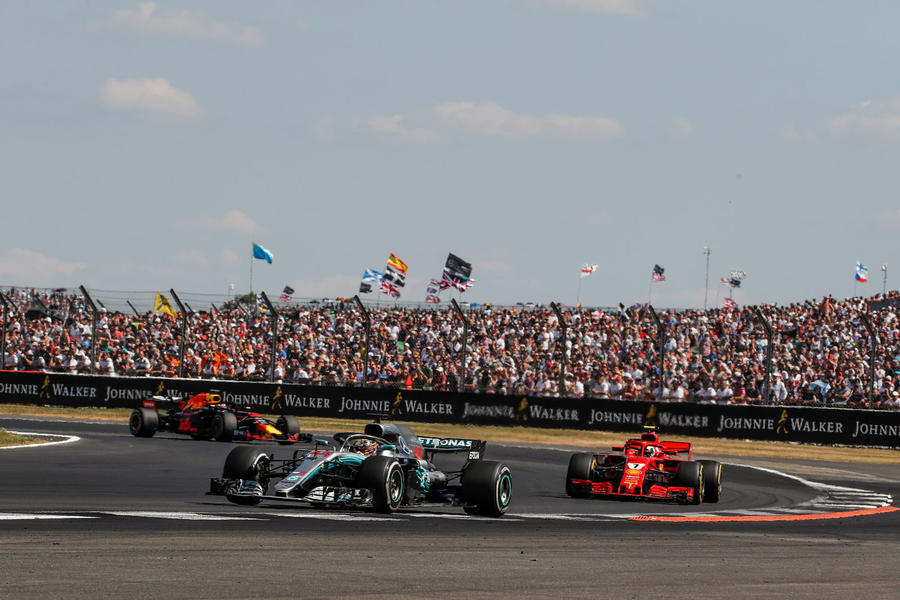 Sixteen days. That’s how long it took, from planing to final surface. Vine had predicted 12, but in the circumstances this was some achievement. Pringle, who insists enough time has been left for curing, is in awe of the crews who put in the hours. “The weather was truly atrocious and we were in a programme of planing through the night,” he says, “and those planing machines don’t have a cab on them or any weather protection. Those poor blokes were absolutely battered.”

And the result? Proof will be in the pudding when the first F1 cars roll out for practice on Friday morning, and again when MotoGP returns on 25 August. Keep your fingers crossed.

they signed a new 5 year

they signed a new 5 year contract just b4 the race

Read somewhere that Silverstone was guaranteed till the 2020’s?