BACK TO ALL NEWS
Currently reading: Co-driving in the Ford Fiesta R5 with Elfyn Evans, British rally champion
UP NEXT
Lotus Emira vs Porsche 718 Cayman

Because we’ve all watched the clips on the internet or tuned in on the telly, it’s tempting to think this gives some idea of what it is like to be a passenger in or even drive a state-of-the-art modern rally car. Thanks to 2016 British rally champion Elfyn Evans and his R5 Ford Fiesta, I am now in a position to disabuse every one of us of that notion.

To describe Evans and his M-Sport-developed Fiesta as on top of their game is to understate the obvious to a considerable degree. In the seven rounds of the resurgent British Rally Championship, Evans won five, the Fiesta six. M-Sport commercial director Andrew Wheatley says of Evans: “I’ve been in this business for years and I’d say now there’s no difference between the level he is on and that reached by Colin McRae and Richard Burns.”

We’ve met at the near-derelict airfield in the far north of England where M-Sport shakes down all of its rally cars before they head off to events or its many customers around the world. The company builds more than 50 Fiestas a year, including not only these R5 category cars, which cost £180,000 each, but also fullhouse World Rally Championship cars, yours for £420,000 a pop. 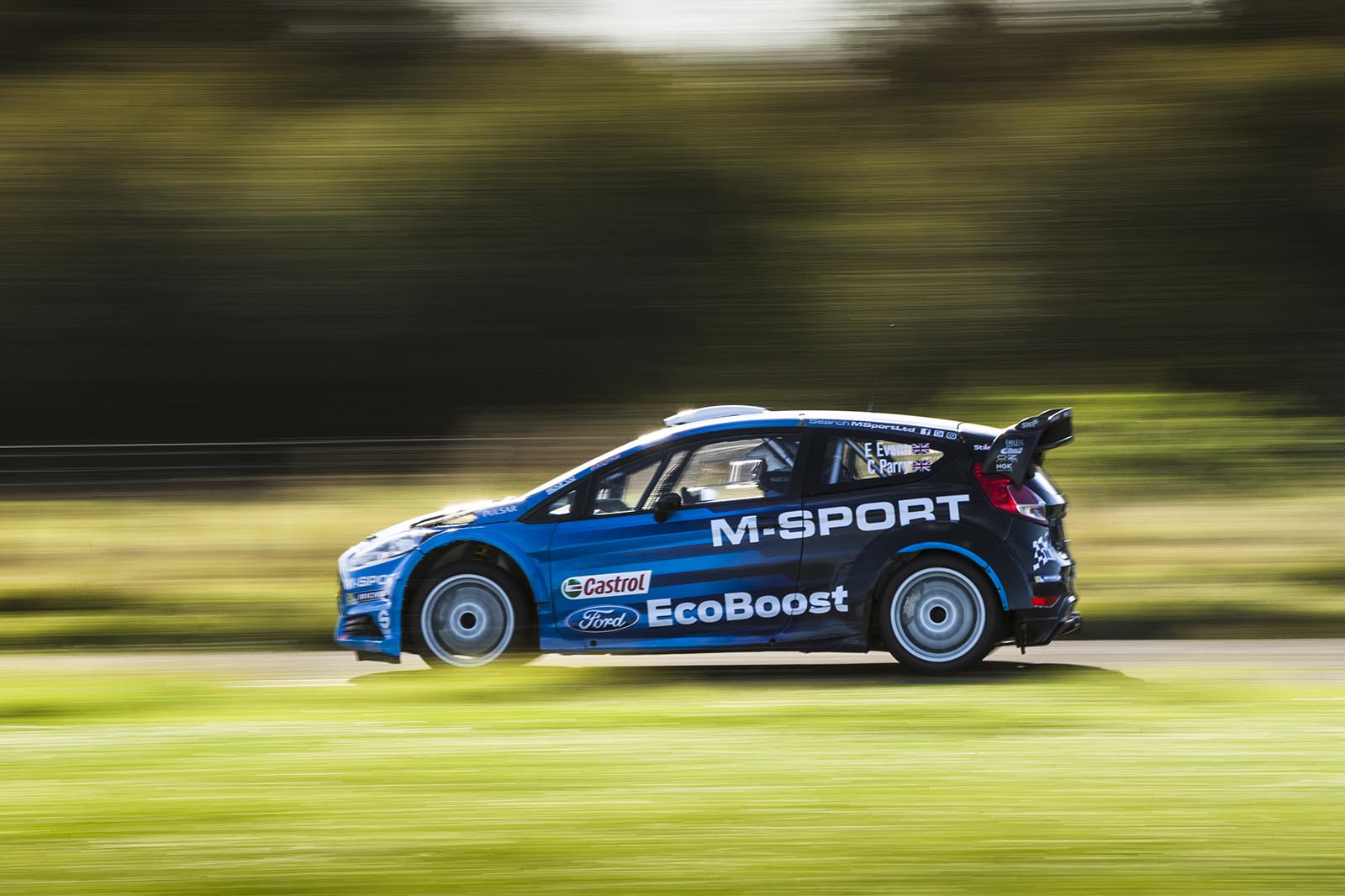 But just because one costs more than twice as much as the other, don’t escape with the idea that the R5 is any kind of poor relation. Both have 1.6-litre turbo engines and four-wheel drive, the 290bhp R5 a scant 30bhp short of the WRC car and 30kg heavier. In pure pace terms, that deficit adds up to a single lost second over a kilometre of flat-out special stage. Which means the best R5 drivers like Evans can easily beat some of the steadier WRC pedallers.

Later today, I’ll drive the R5 myself. But first, Evans takes me outin it and, somewhat worryingly, makes me feel physically ill just warming up the super-soft slick tyres that remain on the car from its previous outing on a tarmac rally. Then he presses a little button with ‘RS’ written on it to engage Stage mode and, without another word, does his thing.You’d think a car weighing the best part of 1300kg with less than 290bhp wouldn’t be that dramatic in a straight line – its power-toweight ratio placing it somewhere between a Porsche 718 Boxster and a Boxster S. But none of this accounts for the torque. It feels like that rare bodyboarding moment when you catch a really big wave just right: one moment you’re simply trying to move, the next you’re hurtling into shore, propelled by a vast, unseen force. It’s slightly disorientating at first.

But you can’t spend too long waiting for that, because corners lie ahead for which Evans clearly feels no need to slow – not in the conventional sense, at least. Where you or I might brake progressively and turn in gently, he does the reverse, one short stab at the brake designed, I am sure, simply to unsettle the car before lobbing it at an apex it finds every time. However, he never adopts those lockstop drifts from rally days of yore, at least not on these tyres and this surface. Spectacular though it may be, the more time you spend going sideways, the less time you spend going forwards, and it is that sense of maintained forward momentum regardless of the car’s actual angle of attack that lives longest in the brain.

My turn and, to my great dismay, Evan has climbed in next to me. I feel like a grade one piano student about to give a recital. To Chopin. 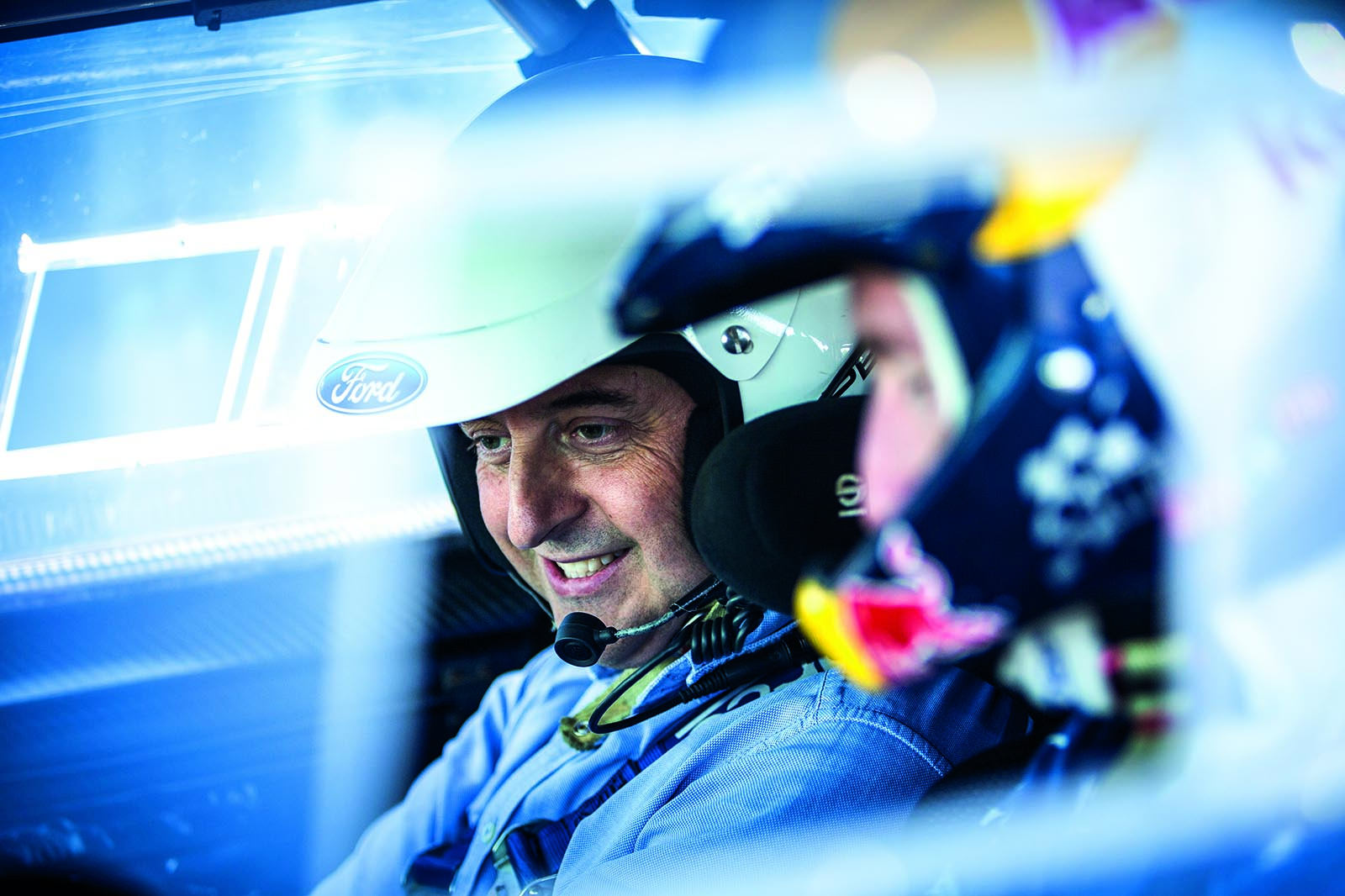 But the basics are easy to grasp: three pedals (the one on the left only to be used to pull away), a simple steering wheel and two huge levers, one to tug for each sequential shift, the other to disengage the four-wheel drive and pull on the rear brakes to spin the car around tight turns.

It’s so much easier in the driving seat. The performance seems normal, the steering is quick but not nervous and the pedal weights are firm but full of feel. The Fiesta’s eagerness to articulate itself around its centre point dependent on throttle position even reminds me of the historic cars I get to race whenever I can talk an owner into letting me drive. The speed and accuracy are on a different plane, but that adjustability and userfriendliness are familiar. I can’t get the hang of spinning the car around at the end of each run, but in the near-flat kink halfway through, I get used to being quite ambitious with entry speed, killing a slight but natural desire to understeer with a little lift, getting back on the power and riding out the slide with the steering.

I was quite pleased with myself until I asked Evans how I’d done. He paused before choosing his words with great care: “Well, I’ve been with plenty worse…” Meanwhile, my works contract from M-Sport appears to have been lost in the post.

Opinion: UK rallying is back with a vengeance

As a friend of the late Ricky I agree. Colin was a totally different driver and personality - bit "off-ish" whereas Burnsy made friends even with kids watching the start of a rally. I even had the priv to drive his car in Greece whilst practicing for Acropolis - oh please bring back this great rally - 3 days of hell and adrenaline. Elfy? he has a very long way to go to emulate the men