BACK TO ALL NEWS
Currently reading: How motor sport teams prepare for a 24-hour endurance race
UP NEXT
Niels van Roij Design unveils tribute to Ferrari 'Breadvan'

How motor sport teams prepare for a 24-hour endurance race

It’s not only the drivers who need to be in tip-top condition to perform at their best in long-distance racing. Simon Strang finds out how Aston Martin does it
Share
Close
Share story

“We’ll start preparing for the 2016 Le Mans 24 Hours on Monday [after the race],” says Aston Martin team principal John Gaw the day before this year’s event.

Preparation is at the heart of everything that comprises a factory attack on the world’s biggest race, and while on face value that is hardly surprising, it is the minute detail that will count toward success or failure.

Over 24 hours, things will go wrong, that is certain. Even a smooth run through the race will require a brake change, involve an incident in traffic, potentially a cut tyre… such is the attrition subjected on the competitors over the 300-plus laps around the 8.47-mile circuit.

The art of success at Le Mans is to be proactively reactionary. In other words, play-out every conceivable scenario so that when something happens that you didn’t plan for, everyone in the team, from chief engineer to junior technician, is able to react calmly and make the correct decision in seconds.

Those decisions will define your race.

Prodrive, which prepares and builds the race cars for Aston Martin, has established its Driver Performance company for this very reason. And while the name suggests it’s about the stars, this division aims to extract performance from all of its personnel when it’s absolutely business critical: race day.

“So it’s about creating that performance zone in the most important moments of a race, where the best decisions can be made in the least stress with a consistent framework.

“Individual performance is absolutely important. It’s the moment in the middle of the night when the safety car is called and it’s the instantaneous decision then by driver, technician and engineer. That’s why you need that environment.”

GT drivers have it tough at Le Mans. With their hearts ticking over at an average of 145bpm, they have to race within an enclosed cabin that is regulated to 32 degrees C – or higher if the ambient temperatures is above that. It used to be unregulated and then the temperatures, Aston driver Darren Turner reckons, were often above 60 degrees C.

“We’ll always run the car as hot as possible,” says Gaw. “There are three different knobs on dashboard and they’ll turn the aircon down as much as possible, otherwise you’re just taking power away from the engine.”

Drivers enclosed in that environment often triple-stint on tyres for more than three hours in race conditions at least twice during the race. That’s three times longer than a Formula 1 driver is expected to go.

“The physicality is significant,” says Driver Performance boss John Camilleri, the man entrusted with keeping Aston Martin’s drivers and team ticking over during the event. “The competitiveness is so close in the GTE Pro and Am classes that physical preparation makes a significant difference. The idea is to help the guys prepare physically in an optimal way for them as an individual.

“For example, drivers will drink 12 litres of water during the 24 Hours, which helps blood pressure regulation behind the wheel. That helps with mental preparation and allows you to focus for a long period of time.”

The drivers will also be routinely worked through individual warm-up and warm-down routines between stints and their rest periods in between managed carefully.

“Managing driver recovery is important,” says Camilleri. “As soon as the driver is out of the car, we get them out of their wet kit, on the sports massage table and then get them off for some sleep. 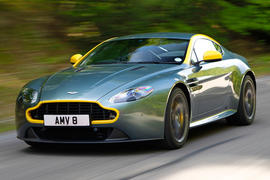 “You try to maximise their sleep for optimal recovery, but the reality is they are always compromised on the amount of rest they can have. Then it is about helping the driver wake up efficiently before they have to go back into the car. Then it’s rehydrate, feed, do a controlled warm-up and race.”

Le Mans is not just a test of physicality for the drivers, the technicians and the engineers are put through the wringer too.

“Pitstops for Le Mans are very physical for the technicians,” says Camilleri. “As a group they will do a warm-up, stretch the relevant muscle groups before they do their job in the pitstop, getting the heart-rate up to a level of activation. Sometimes they can be asleep in the chairs and then they are suddenly fully committed to a pitstop at high-speed so they need to be accurate.”

Turner points out that the guys with the toughest job are actually the race engineers, responsible for the running of the team’s four cars.

“They don’t get to sleep from 1000hrs Saturday morning, to 1900hrs on Sunday,” he says. “They get just about enough of a break to visit the toilet.”

Camilleri adds: “The engineers have it hard so we actively encourage them not to sit down or stand up for too long. When they are recruited it’s on the assumption that these guys are going to be able to concentrate and perform at a mental intensity that they need for that amount of time.”

Which takes us back to Gaw’s central point. It’s about preparation right from the very starting point of the programme.

“We try to lay-out every single scenario so that it should just be a mathematical exercise,” he says. “If this happens you do this, if that happens you do that. So defining all the what-if scenarios is the most important thing.

“Assuming that you have got all the work done, to get to this point, performance of the individuals is then the defining factor.

“You make the best decisions in life sitting on your sofa when you’re chilled out.

“It’s that moment at 0400hrs in the morning, when it’s raining and there is call for the safety car and you have to decide what you are going to do… that’s when it counts, and that’s why you have to be prepared.”