BACK TO ALL NEWS
Currently reading: Cupra signs up Dakar Rally winner for second Extreme E season
UP NEXT
McMurtry to launch road-legal version of Speirling fan car

Abt Cupra XE will field a pair of Dakar Rally winners in the second season of Extreme E, with Nasser Al-Attiyah joining Jutta Kleinschmidt in the team’s revamped Cupra Tavascan XE.

Saudi Arabian Al-Attiyah is a four-time winner of the legendary endurance event, claiming victory in the 2022 event last month in a works Toyota Hilux.

Kleinschmidt, meanwhile, is the only woman to have won the car division of the Dakar, taking glory in 2001 in a Mitsubishi Pajero.

She began last season as a reserve driver in the electric off-road racing championship but replaced the unwell Claudia Hürtgen for the second round and then kept the seat for the rest of the year.

Mattias Ekström was the team’s male driver last year, but he has been replaced by Al-Attiyah. While the Saudi is a newcomer to electric motorsport, he has extensive off-road experience: as well as his four Dakar titles, he's a five-time FIA Cross Country World Champion, the 2005 Production Car World Rally champion and a 16-time Middle East Rally Championship title-winner.

He also claimed a Bronze medal in the men’s skeet shooting event in the London 2012 Olympics. 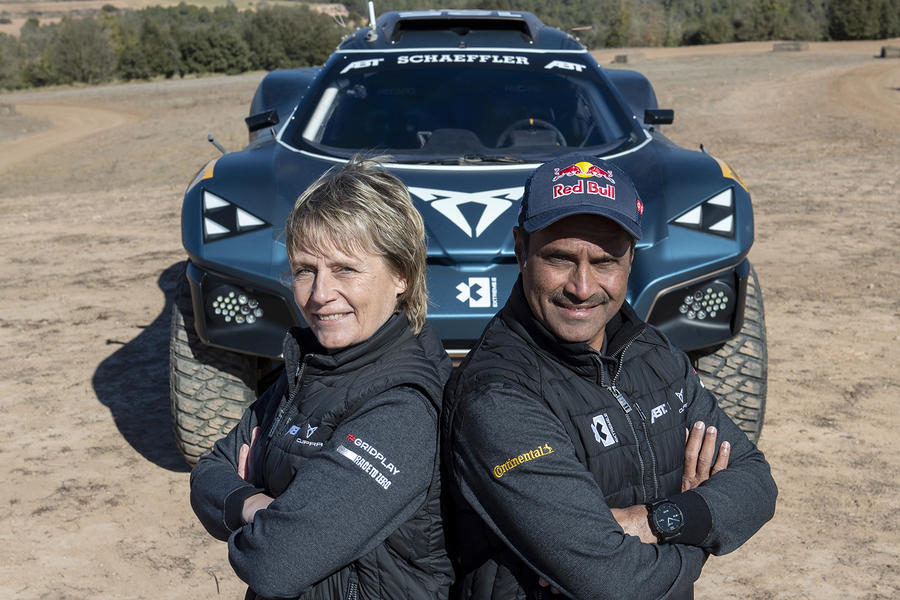 Each Extreme E team must field a male and a female driver, who share a Spark Odyssey electric 4x4, which has a 54kWh battery and 536bhp for a 0-62mph time of around 4.0sec.

X Prix events feature a series of heats and finals run over two laps, with the drivers having to switch at the midway point.

While all the Odyssey 21s used in the series are mechanically identical, teams are allowed to fit their own bodywork to relate them to road cars.

Cupra was the first car maker to back a team in the series, and as a result its 2022 racer features styling that previews the forthcoming production version of the Tavascan electric SUV.

Cupra also said that the new machine is designed for greater sustainability, featuring 3D-printed parts that make it more adaptable and easier to repair.

"It’s a great opportunity for us to keep updating our cars, to keep working on future developments, and we're delighted to race in 2022.”

Nasser is not Saudi Arabian. He's from Qatar.