BACK TO ALL NEWS
Currently reading: Ford Mustang Mach-E gets Shelby treatment for SEMA 2021
UP NEXT
Hidden gems: A peak behind the scenes at Beaulieu

Ford has taken to the SEMA aftermarket exhibition in Las Vegas to present an array of concept cars highlighting the range of accessories and performance parts available to Ford buyers in the US.

SEMA concepts, even manufacturer-produced ones, rarely have any production potential, but the Shelby Mustang Mach-E GT on Ford's stand hints at what to expect from uprated versions of the electric SUV.

The GT is already the range-topping version of the Ford Mustang Mach-E, bringing a raft of chassis enhancements and a power boost to tune of around 190bhp over the standard rear-driven model, but tuning firm Shelby has upped the ante further with improved aerodynamics and heavily upgraded suspension.

In true Shelby style, it's marked out from the standard GT by distinctive racing stripes down the sides and across the top, and other details exclusive to the concept include 20in Monoblock alloys wrapped in Michelin Pilot Sport EV tyres, a blue Mustang emblem and a Mustang GT350-style bonnet scoop.

Alongside an aero-focused carbonfibre bodykit, the concept gains new Shelby-tuned Magneride dampers with carbonfibre springs, which hints at how Shelby could provide hot Ford EVs with a distinct dynamic character in lieu of any significant powertrain modifications.

Ford acknowledges that the concept "is a look at what could come from the legendary performance brand".

It's joined on Ford's SEMA stand by two other variants of the Mach-E. The Austin Hatcher Foundation for Pediatric Cancer has added a unique carbonfibre body kit, Rotiform racing wheels and uprated brakes to the GT for a one-off that will attempt to hit 200mph at Bonneville Speed Week next year; while the outlandish Mach-E California Route One has been created by customiser Neil Tjin to offer "a glimpse into the electric future with a distinctive California spirit". 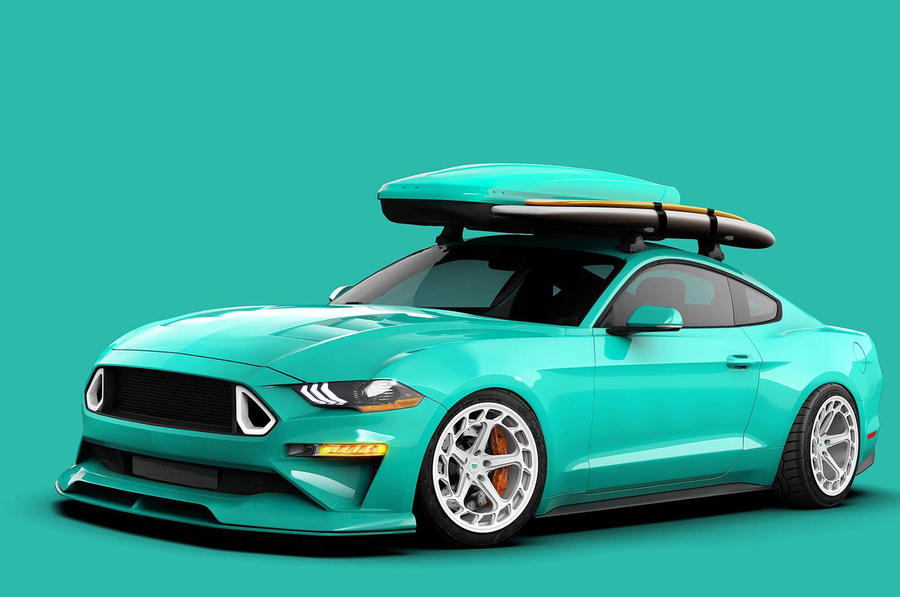 The Ford Mustang Fastback is well-represented, too, with Tjin's brother Gene offering up the heavily customised All Star Mustang EcoBoost HPP (pictured above) and engineering firm M2 Motoring creating a track-ready version of the V8-powered GT.