The new BMW 2 Series Gran Tourer is the latest in the company's new model push and is its second dedicated front-wheel-drive model.

It's a larger sister model to the recently introduced 2 Series Active Tourer, and the versatile hatchback-cum-MPV is on display at the Geneva motor show prior to the start of UK sales on 6 June.

As hinted in earlier scoop photographs, the 2 Series Gran Tourer shares its front-end styling with the 2 Series Active Tourer. Its silhouette differs dramatically from traditional rear-wheel-drive BMW models, with a short bonnet and a heavily angled windscreen giving it a distinctive cab-forward influence.

At 455cm long, 180cm wide and 161cm high, the 2 Series Gran Tourer is a considerable 21.4cm longer and 5.3cm taller than the 2 Series Active Tourer, but exactly the same width. The majority of the extra length is concentrated within the wheelbase, which has grown by 11cm to 278cm to provide the new BMW with longer rear doors and a generous aperture to access the rear seats.

Inside, the 2 Series Gran Tourer uses the same dashboard and fittings as the 2 Series Active Tourer – alongside which it will be produced at BMW’s factory in Leipzig, Germany. The new MPV will come as standard with three rows of seats in the UK, although European customers will be able to elect to have a five-seat version that still benefits from the extra space over the Active Tourer.

The boot capacity is 645 litres with the rear-most seats down, rising to a copious 1905 litres when the second row of seats, which split and fold in a 40:20:40 configuration, are folded away.

By comparison, the 2 Series Active Tourer offers a respective 465 litres and 1510 litres. As in its smaller sibling, the second row of seats slide back and forth, allowing you to alter the amount of rear leg room at the expense of luggage space. However, unlike the Active Tourer, this is something that is offered as standard in the Gran Tourer.

The second row of seats can accommodate three universal child seats, while the third row is capable of taking two, taking the total number of child seats you can fit in the Gran Tourer up to six, including the front passenger seat.

The 2 Series Gran Tourer is the second BMW model to use the German car maker’s high-strength steel UKL platform. The contemporary structure adopts a transverse engine layout to offer buyers the choice between standard front-wheel drive and optional four-wheel drive – although the latter is available only in combination with the top-of-the-line 187bhp turbocharged 2.0-litre four-cylinder diesel engine for the time being.

The lightest of the launch models is the 1395kg 218i, with the 1565kg 220d xDrive's four-wheel-drive hardware making it the heaviest. It includes an electro-hydraulic multi-plate clutch that is used to apportion drive to each wheel depending on the amount of traction. The same set-up will be used by the upcoming second-generation X1, which is described as being closely related to the 2 Series Gran Tourer. 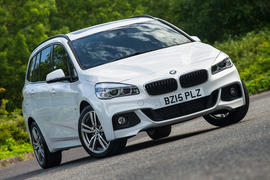 You won't find another premium, all-wheel-drive, seven-seat compact MPV like BMW's xDrive 2 Series Gran Tourer, but is there a reason for that?

Mirroring the move taken with the smaller 2 Series Active Tourer, BMW also plans to add the 216i and the front-wheel-drive 220d to the 2 Series Gran Tourer line-up shortly after its UK introduction.

However, project leader for the 2 Series Gran Tourer, Peter Krist, said that there were no plans to add a plug-in hybrid version to the car's range. "We will bring hybrids on the Active Tourer, but on the Gran Tourer it is not planned right now but the platform will fit it," he said.

He also confirmed that there are no plans to add any more powerful engines to the line-up, saying: "We mainly sell in Europe and China but nothing in the US. The 20d xDrive will be our top model because there is no demand for a 25i or something like that. It is there - we have it on the Active Tourer - but right now we don't see a business case for it."

There will be four trims to start off with in the UK: SE, Sport, Luxury and M Sport. The SE trim brings 16in alloy wheels, digital radio and Bluetooth, dual-zone climate control, sliding and reclining middle-row seats, an electronically powered tailgate, auto lights and wipers, rear parking sensors and roof rails as standard.

Sport trim adds £1250 to the price and brings 17in wheels, front sports seats, gloss black interior trim and upgraded cloth upholstery. Luxury trim adds £2000 to the price of an SE and gets another design of 17in alloy wheels, leather upholstery and wood trim.

looks like a 5-series went to south korea for plastic surgery and it all went horribly wrong and this is the result. this is just about the ugliest car ever, period.
John O'Groats 12 February 2015

The five-seater 220d xDrive version would be an absolute winner for mine. It would also have the advantage of being a vehicle which is distinctive in appearance - plus with a bit of good fortune, it might be a catalyst to inspire Jaguar to
give far greater priority to building vehicles with decent rear-seat legroom, since that clearly hasn't been an area of focus for Jaguar since Adam wore three cornered pants.
John O'Groats 12 February 2015

The five-seater 220d xDrive version would be an absolute winner for mine. It would also have the advantage of being a vehicle which is distinctive in appearance - plus with a bit of good fortune, it might be a catalyst to inspire Jaguar to
give far greater priority to building vehicles with decent rear-seat legroom, since that clearly hasn't been an area of focus for Jaguar since Adam wore three cornered pants.
View all comments (23)