BACK TO ALL NEWS
Currently reading: Electric single-seat fan car launched at Goodwood
UP NEXT
Renault Scenic returns as radical EV with hydrogen range extender

An innovative electric single-seat fan car has been unveiled by British firm McMurtry at the Goodwood Festival of Speed.

Named the Spéirling (and pronounced ‘spearling’ - Irish for thunderstorm), the car features an unusual ‘powered downforce’ electric fan and ground-hugging underbody skirt, allegedly capable of generating 500kg of downforce at a standstill.

The reasoning behind the technology is to enable a significantly reduced drag coefficient at the same time as maintaining high levels of downforce. McMurtry argues that with minimal upper-body aerodynamic aids, the Spéirling has a much lower coefficient of drag, something that "defines how much electrical energy you need".

Featuring striking looks and a 60kWh battery that wraps around the cockpit, as opposed to the skateboard set-up favoured by most manufacturers, the rear-wheel-drive Spéirling is claimed to be capable of 0-186mph in under 9.0sec.

Thanks to a sub-one-tonne kerb weight and minimal drag bodywork, the car is capable of running at track speeds for between 30 to 60 minutes. This estimated range puts it on a par with the current Formula E racers. 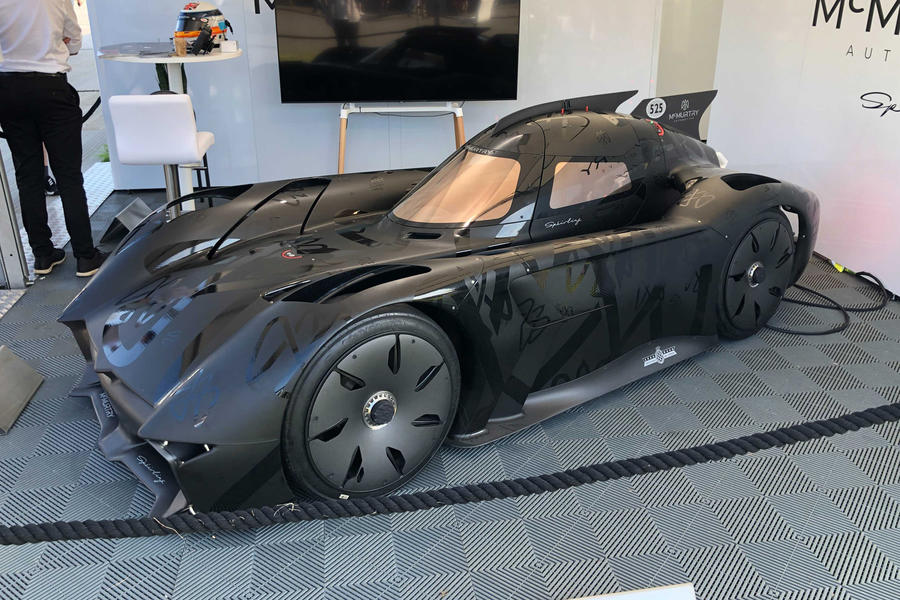 Further technical details are scarce at the moment as the 3.2m-long prototype is currently a proof of concept development model. However, it’s claimed that it should be capable of "GT3 levels of performance". The firm’s managing director, Tom Yates, has said the aim is “to create the best electric car we can. We have used the very best motorsport safety to design the car but have ignored any technical rules to design a car from the ground up.”

Ultimately, the objective is to build something that will be able to compete in a race series. A road car could be a long-term possibility, although Yates said this is some time off: “We’re not close yet. We need to build a brand first and the timing has to be right. First, we need to build the credibility, then prove the car and then the technology. And then we can look at what motorsport we could compete in.”

Five-time Le Mans winner Derek Bell is driving the car up the hill at Goodwood, before the team embarks on a series of record attempts later this year and in 2022. Precisely what these will be remains under wraps for the time being.

Godwood Festival of Speed 2021: all the new cars on show

Can it really weigh less than a tonne, with a 60kWh on board?

If so, the car itself must weigh almost nothing!

With current technology (no pun intended) the battery alone would weigh around 500kg.

What a wild Looking thing it is, like Batman's personal transport!