BACK TO ALL NEWS
Currently reading: New Lamborghini Huracan Performante - exclusive pictures
UP NEXT
Alfa Romeo to show new sports car in early 2023

This new hardcore Huracan, which gets a 631bhp V10, has recently smashed the Nürburgring production car lap record and will cost £213,000
Open gallery
Close

The track-focused Lamborghini Huracán Performante has been revealed at the Geneva motor show, a week after a camouflaged version smashed the Nürburgring production car lap record, beating the Porsche 918 Spyder’s time by 5.0sec.

The Huracán Performante uses a  631bhp, 443lb ft mid-mounted 5.2-litre V10, which is the most powerful engine of its type yet produced by Lamborghini. The model can hit 62mph from rest in 2.9sec, 0.3sec faster than the regular Huracán, and top speed is 202mph. With a dry weight of 1382kg, it has a power-to-weight ratio of 464bhp per tonne.

Lamborghini said the engine has an "optimised" torque curve, with 70% of torque available at just 1000rpm. The car's seven-speed dual-clutch automatic transmission has also been "optimised in order to match the increased performance". 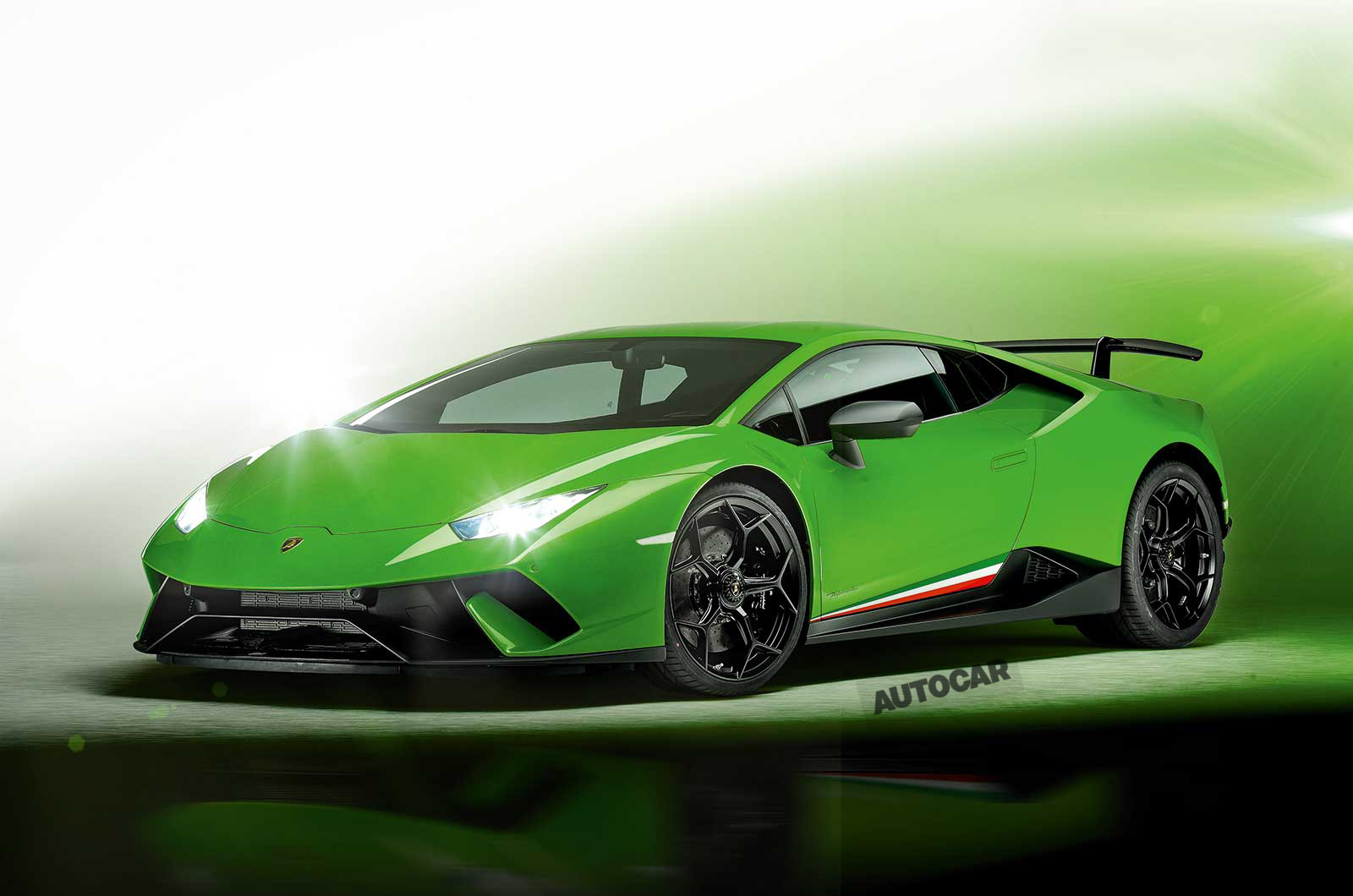 The Performante features a new, ultra-lightweight forged carbonfibre composite material, which has been patented by Lamborghini and allows complex moulded shapes to be made in one piece.

Use of the new material is focused on active aerodynamic elements. The Performante’s fixed rear wing, including its air ducts and flaps, is made from a single piece of forged carbonfibre. The flaps close for maximum downforce and open for maximum air flow using an electro-actuator system, which gives an 80% reduction in weight compared with a hydraulic system, the supercar brand claims.

The rear wing also features an inner air channel, which splits to the left and the right to allow aero vectoring for high-speed cornering. The duct can be closed on either side depending on which way the car is cornering, in order to generate low drag on the exterior wheel and high downforce on the inner wheel, all of which improves the cornering performance.

According to Lamborghini, the wing gives the Performante 750% more downforce than a standard Huracán with no wing.

At the front of the car, flaps inside the spoiler close when the active aerodynamic system is off and then open when it is on, reducing frontal air pressure and directing it through a channel under the car in order to reduce drag for optimum acceleration and top speed.

Specially developed Pirelli P Zero Corsa tyres have been designed perform with or without the car's active aerodynamic systems applied, for both road and track conditions. A high-performance track tyre, the Pirelli Trofeo R, with street homologation is also an option.

The design of the model heavily reflects that of the Lamborghini Super Trofeo racer. The redesigned front end is “much more aggressive and aligned to a race car”, according to Lamborghini.

Other bespoke touches include a bronze engine manifold cover, which has been used on past Lamborghini special editions such as the Diablo 30th Anniversary.

Lamborghini boss Stefano Domenicali said: “This new car represents the powerhouse of Lamborghini DNA and innovation and a 360deg approach to creating class-leading super-sports cars. It illustrates the pinnacle of Lamborghini V10 production car performance to date, on both track and road, and is perfectly exemplified by its name.” The car goes on sale in the summer. It will cost £213,000 and there will be no limits on production volume.

I have absolutely zero

I have absolutely zero interest in ring times. But what I do want is a manual box - I wouldn't want it without one.
DdWorks 7 March 2017

How... I wished Lamborghini could have done more to tweak the fascia and side skirts more aggressively. It looks almost similar to its big brother, the Aventador S.
NoPasaran 6 March 2017

Is it the same system as in Golf R and TTRS or are there differences?