BACK TO ALL NEWS
Currently reading: New entry-level Alfa Romeo planned, could be hatch or SUV
UP NEXT
New Volkswagen Golf R brings 316bhp, costs £39,270

New entry-level Alfa Romeo planned, could be hatch or SUV

Firm's European brand boss confirms lower-priced model, which could be hatch or SUV, and says it will be crucial to hitting 400,000 sales target
Share
Close
Share story

A new entry-level Alfa Romeo is being evaluated to sit below the Giulietta and upcoming Tonale, the brand’s European boss Roberta Zerbi has revealed.

The firm has axed the Mito supermini, and did not include a replacement for that model as part of its five-year business plan revealed last June.

But when asked about a new entry-level model at the Geneva motor show, Zerbi said: "We are looking below what we have and above what we have - that is all I will say."

Zerbi refused to elaborate further, but said: "If we want to hit our sales target of 400,000 cars a year we need an entry-level model. For sure I am not talking about another Mito, but what it is we will see.”

That raises the possibility of the firm either developing a hatchback to sit below the Giulietta - which Zerbi confirmed would be replaced - a compact SUV to sit below the Tonale revealed as a concept in Geneva today, and which is due to launch in production at the end of 2020, or a crossover which combines the merits of a high-riding hatchback.

With SUVs and crossovers rising in popularity and able to command bigger margins in the premium market, that would be the most likely option for Alfa, especially given the ability to use architecture from other FCA Group firms including Jeep.

The larger model referred to by Zerbi is believed to be a stretched version of the Stelvio, potentially accommodating up to seven passengers in a bid to woo buyers, especially in the American and Chinese markets. The firm's five-year business plan included both a long wheelbase version of the Stelvio, and a separate 'e-segment' large SUV. 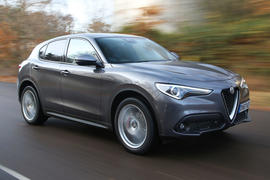 Spiritual successor to the Alfasud.

In the mid 1970's my mother shocked us all by driving home in an Alfasud. My father had promised her a VW bug for finally passing her driving test. However, after a year she grew tired of being a nervous driver and went for a spin in a coworkers car loved how easy it was to drive,  the space. Best of all it had four doors. It was very reliable however, eventually rust set in.

The new car has to bring new blood into the brand. Who get the practical needs met but then fall in love with the drive. Her last Alfa was a 164 then they pulled out of the American market. It was replaced with a go out with a bang Boxter.

love the idea I hope they

love the idea I hope they dont go to far with the design but rather change the shape and do a mild facelift on the guilietta also offer AWD on performance models. It would be able to compete with audi RS3 and such like if ferrari get the hand in on things

Any chance of them dropping

Any chance of them dropping that stupid grille?

Thats a bit like saying to Tesla, how about a grill?

Its called design continuity, and I'm glad Alfa understand it, even if JLR don't.

Any chance of them dropping that stupid grille?

Yeah, thats right, sure theeere gonna drop something their cars have had for 100 years, that ll work, why doesnt Rolls Royce drop their grille and the spirit of ecstacy as well ?