BACK TO ALL NEWS
Currently reading: Smart Vision EQ makes public debut as 'electric city car of future'
UP NEXT
Rodin FZero: V10 weapon aims to be world's fastest car

The electric two-seater gives us a clue to the future of city cars, urban mobility solutions and car-sharing models
Open gallery
Close

Smart has revealed how it expects city cars, urban mobility solutions and car-sharing models to progress in the future with the unveiling of the electric Vision EQ Fortwo.

Revealed at the Frankfurt motor show, the self-driving two-seater showcases the solutions and technology Smart boss Annette Winkler says are being considered for the company's future city car models and are set to play a key role in parent company Mercedes-Benz’s Car2Go car-sharing programme by 2030.

The centrepiece of the new concept car is an advanced Level 5 autonomous driving system. It is integrated with swarm intelligence in a move that Smart suggests will make future models and associated car-sharing fleets more convenient and efficient by better anticipating the predictability of demand.

“In the future, car-sharing users will not have to look for the next available car – it will find them and collect passengers directly from their chosen location,” says Winkler.

Smart considers the adoption of autonomous driving technology in the development of its Car2Go scheme a key component in its growth plans. Currently, a Smart model is hired every 1.4sec in cities around the world through a customer base of more than 2.6 million. The company says internal studies predict the number of users of car-sharing schemes worldwide will increase fivefold by 2025 to more than 36.7 million customers. 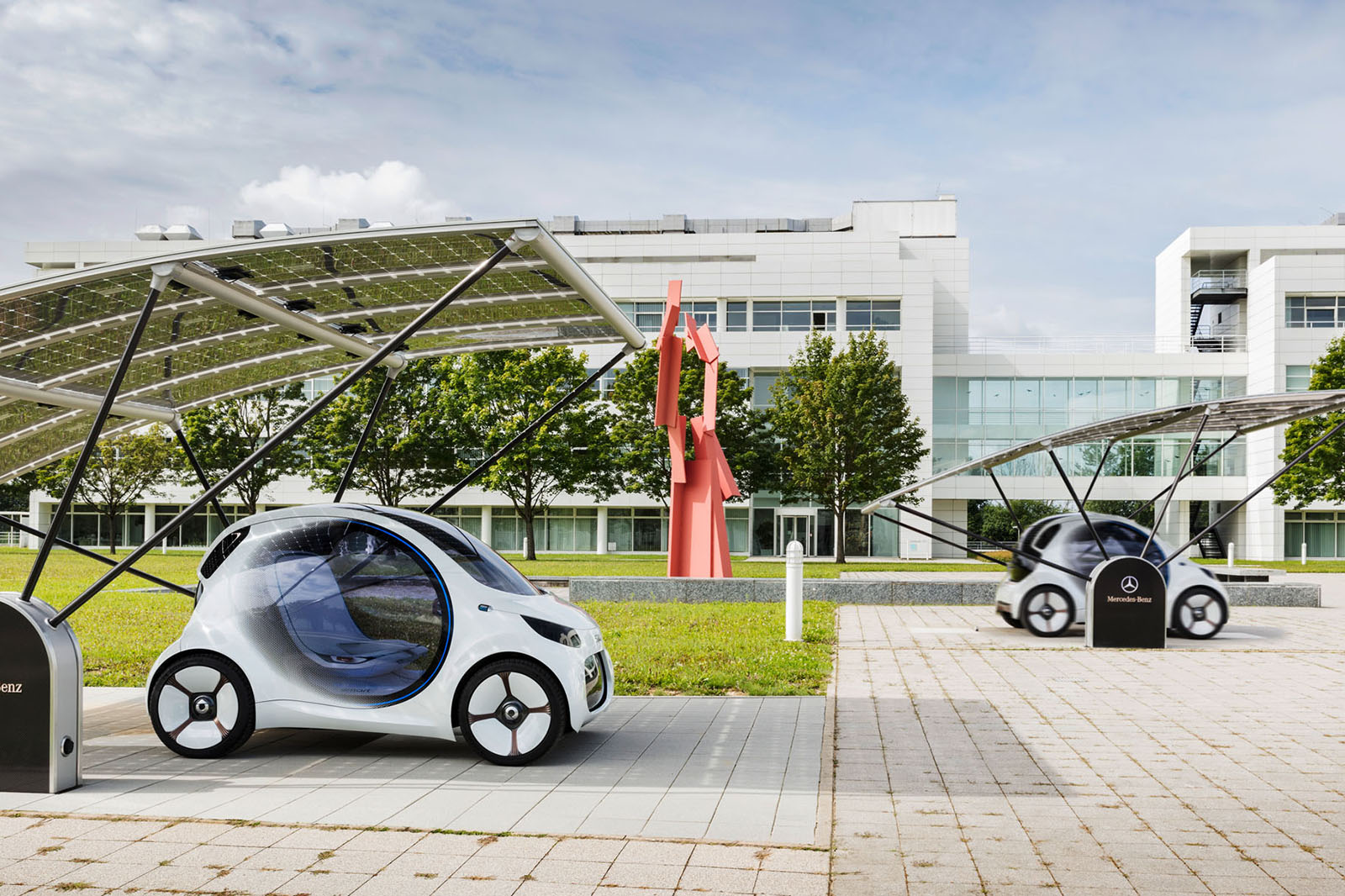 Hinting at plans by Smart to take its line-up exclusively electric in the future under Mercedes-Benz’s EQ electric sub-brand – a move that’s expected to be announced at next year’s Geneva motor show - the Vision EQ Fortwo features a rear-mounted electric motor and 30kWh lithium-ion battery offering a range of “well over 300km”.

When not in use, Smart envisages the two-seat city car to draw on its autonomous driving ability to make its way to a charging station, where its battery can be charged though inductive means, without the need to plug it in.

"Connectivity means you are order and use this car by using your smartphone," said Mercedes boss Dieter Zetsche. "The Smart will be used in swarms so you will never be without transport for long. By providing couriers and delivery services at night, obviously the Smart couldn’t transport much, but we will have a fully autonomous and electric Fuso truck launching in a few days."

Conceived around a pod-like safety cell that provides clues to how Smart plans to evolve the high-strength steel Tridion structure used by all of its models since the company’s inception in 1998, the Vision EQ concept features a one-and-a-half-box exterior design that is expected to influence the styling of the next generation of Smart models. 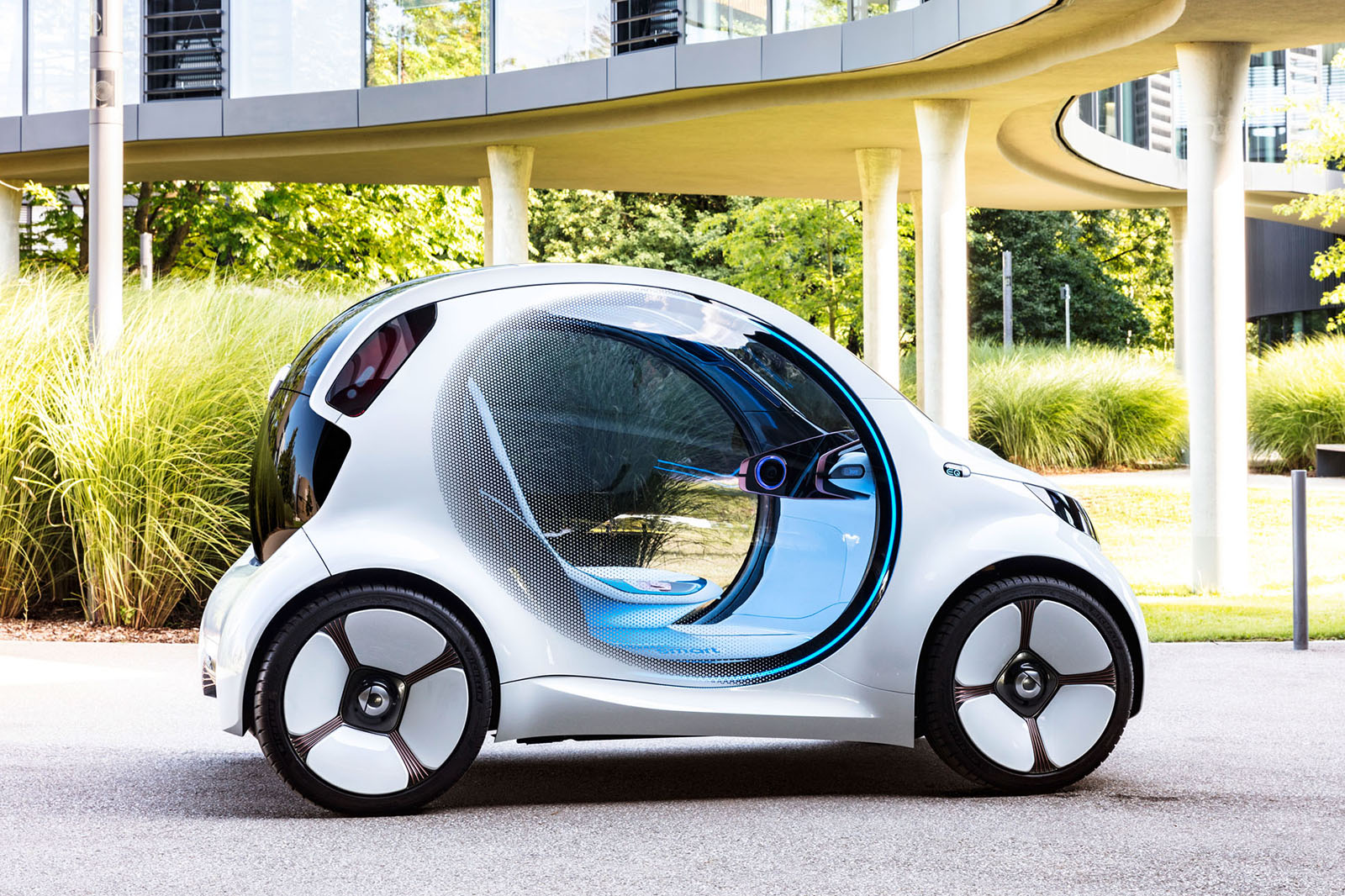 In a continuation of the design of previous Fortwo models, the concept car’s 18in wheels are set at each corner, providing it with the largest possible footprint in a move aimed at maximising interior accommodation.

At 2699mm in length, 1720mm in width and 1535mm in height, the new concept car is the same length but 50mm wider and 25mm lower than today’s third-generation Fortwo.

“The Vision EQ Fortwo is a radical approach,” says Mercedes-Benz’s chief design officer, Gorden Wagener. “It has the hallmark Smart proportions with accentuated wheel arches and no overhangs, as well as the next level of communication and personalisation." 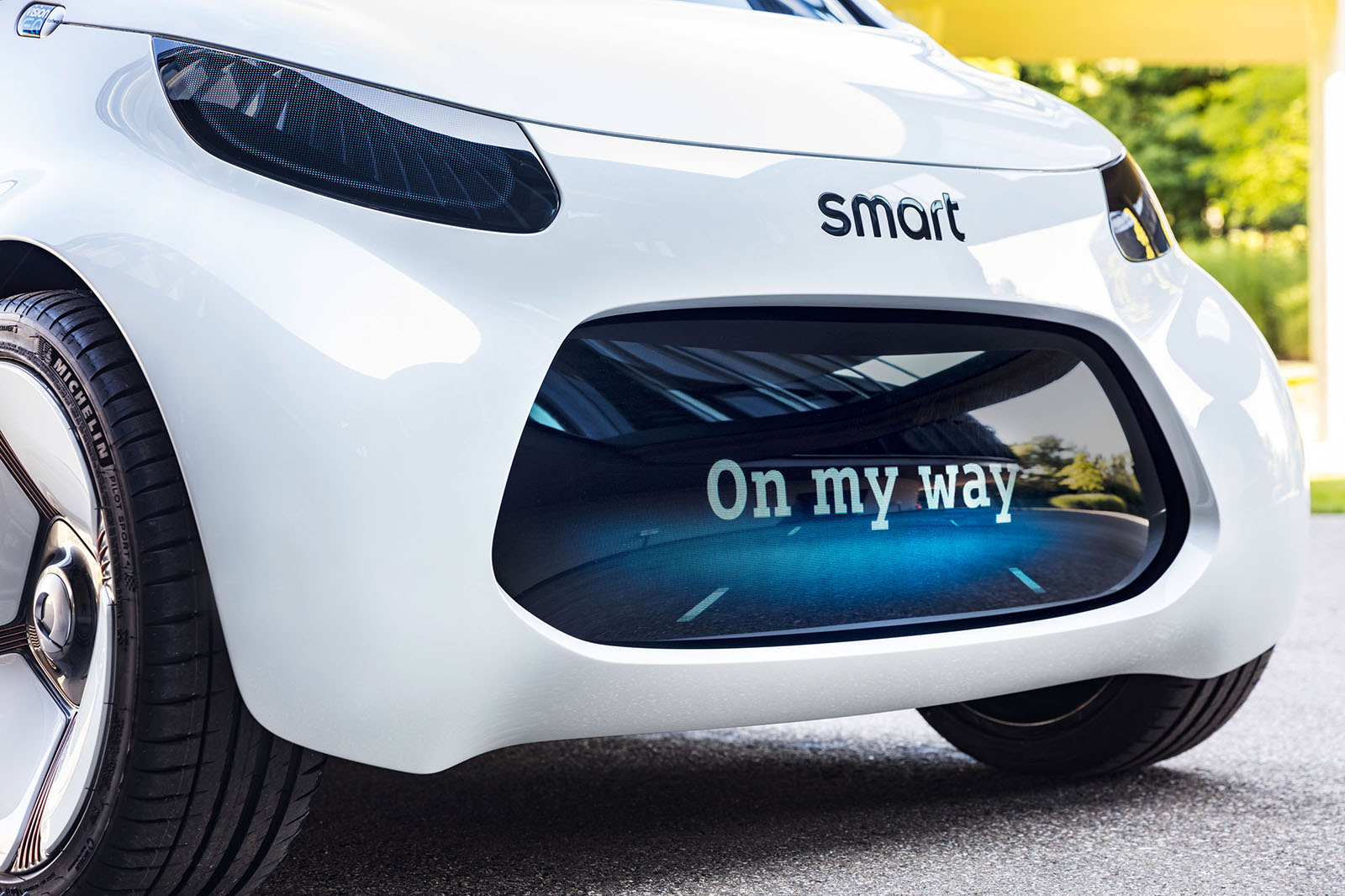 Key elements included on the new two-seater is a newly interpreted front end with a curvy new headlight design and a large trapezoidal-shaped grille – both featuring black panel displays that Smart claims will allow future models to provide greater personalisation and communication functions. A graphic within the headlights mimics the blinking of an eye when passengers approach, while the grille can display messages to prospective car-sharing customers.

Smart predicts future urban mobility models will see cars summoned via smartphone and says the integration of black panel technology, which is also used on the Mercedes-Benz EQ C electric car concept, will allow future models to display information not only meant for car-sharing customers but other road users.

The black panel monitors are designed to indicate whether the car is occupied by one or two passengers. Smart proposes that those wanting to use the sharing function can make contact with other users via a saved profile and travel plans, and can be accepted or rejected by the prime customer. 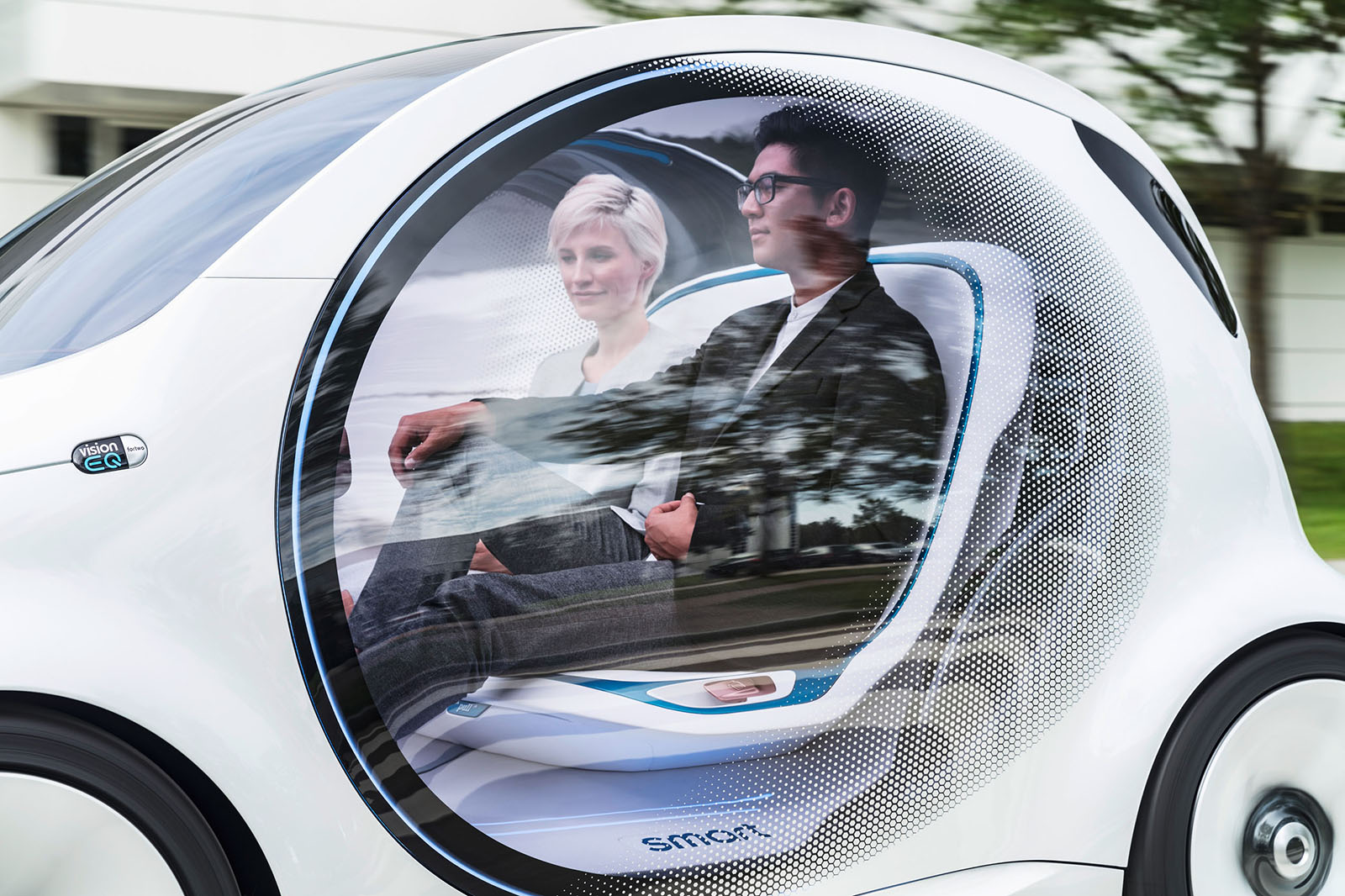 As with today’s Fortwo, the new concept car receives a defined bonnet with the front end structure used as a deformation zone for added safety. The rear end receives a deep, two-piece glass tailgate and high-set LED tail-lights that are designed to carry either a conventional look or provide information on traffic jams or possible delays.

To ease entry in tight parking spaces and reduce the danger of collision with cyclists, the two round electrically operated doors pivot backwards parallel to the sides of the car over the rear wheels, revealing a large aperture through which to climb aboard into the flat-floored cabin. 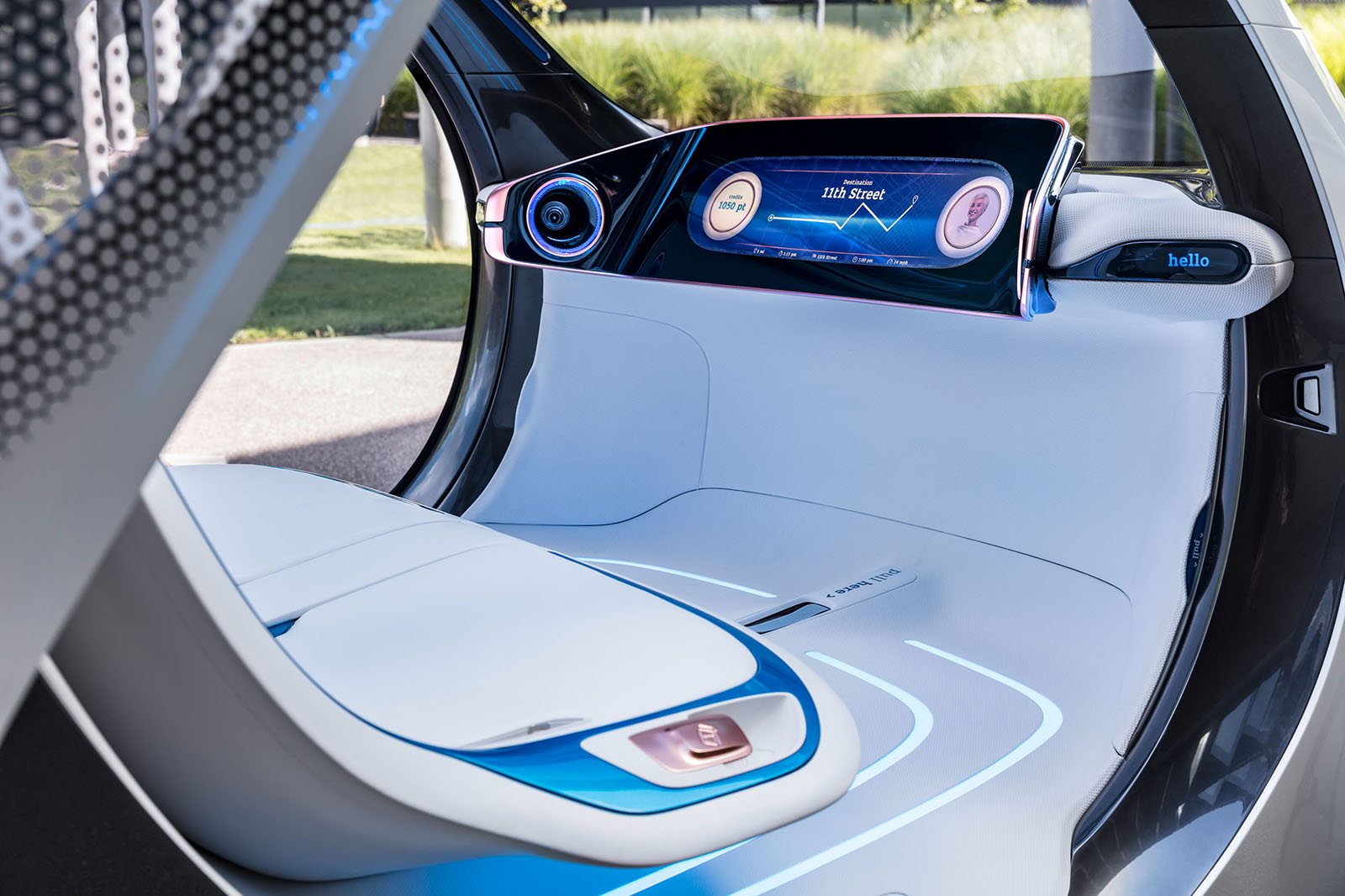 Inside, the self-driving Vision EQ Fortwo features a minimalistic cabin without a steering wheel, pedals or traditional controls. Functions are controlled via smartphone or voice control. With space for two, occupants sit on a lounge style seat featuring a retractable centre armrest.

A wrap-around windscreen and glass doors that can change between clear and an opaque hue provide all-round vision. Information sought by passengers is displayed on a 24in high-definition monitor mounted beneath the windscreen. Smart envisages the doors of the new concept to also display information, such as news, local events and weather, turning it into a mobile billboard.

I want it now

The sooner this thing is driving me to work the better. I want it now!

On the right lines

Must admit, I quiote fancy something small, simple and relatively affordable like this could be - and a 200 mile range would make this genuinely useful for longer trips. If only it had a steering wheel - and  glass doors might not provide much side protection. And does a thing like this really need 18in wheels?  Modern designers don't seem to care about the need to reduce unsprung weight.