The Seat Leon SC Cross Sport concept car will not make production, the manufacturer has confirmed, but the decision has not been made as a result of the VW emissions scandal.

Design studio chief engineer Angel Lahoz said the concept will be used to inspire the design of future cars, while the manufacturer confirmed recent heavy investment in its next five-year plan will go ahead unchanged.

“It was important for us to see if we could create something that offered SUV practicality with Cupra performance; now we know we can," Lahoz said.

Although the car could feasibly be on the road tomorrow, it will remain a concept car that will influence future Seat products. Lahoz added: "The Leon SC Cross Sport, along with other concepts, will help inspire future models."

Carol Gomez, colour and trim designer on the concept, explained that part of the brief was to create a car that appealed to a younger audience: "We wanted to create something that felt young and dynamic, offering an all-road experience as well as an urban one, too,” she said.

"The Ultra Orange colour scheme could appear in the future, but the pigments on the concept can't cope with everyday UV rays so it would have to be slightly different.”

The Spanish company unveiled the high-performance, off-road-focused three-door Leon concept at the Frankfurt motor show earlier this year, and was thought to be monitoring feedback on forums and at the motor show itself before making a decision on whether to build the car and put it on sale.

However the decision has now been made for the car not to be built, and it will instead be used to draw inspiration for the manufacturer’s future SUVs.

The manufacturer denied its decision was a result of the VW emissions scandal. "Our plans are unchanged after dieselgate, and we will continue with our strategy," a spokesperson said.

The Leon SC Cross Sport offers 41mm more ground clearance than the standard Leon SC and is powered by the recently upgraded 286bhp version of the turbocharged 2.0-litre petrol engine used by the production Leon Cupra.

However, the more rugged off-road cars pave the way for the Spanish company's forthcoming range of SUVs, which you can read about here. 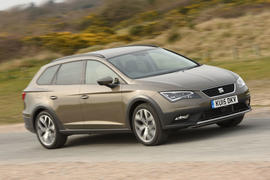 Rugged, four-wheel-drive estate adds extra utilitarian goodness to the Seat Leon's range, but there are better value alternatives out there

This ties in with an emerging trend in the car industry, with mild off-roaders and SUVs becoming halo products that attract customers.

Define utility - the state of being useful

I like that it is 3 door though. Not enough 3 doors out there anymore.

I was about to write: "Wonder how long it will be before LandRover drop the 3door Evoque? Saw quite a few when the car was 1st launched but they all seem to have disappeared." Then thought to myself, why not check LR website? I didn't realise they've already dropped it! So I guess that answers your question - nobody want's a 3dr SUV. (and the same reason the SUV convertible will fail)

11 November 2015
I can assure you that if you go to the land rover website the 3dr Evoque has very much NOT be dropped! You say you even checked the site and still got it wrong.

11 November 2015
The three-door Evoque is, of course, still available although JLR insists on calling it a coupé and cynically trying to charge a premium over the five-door for most trim levels, which might explain its relative scarcity. The car buying public can be a bit dumb, but there are limits...

Shame this car is being binned thanks to the recent scandal

11 November 2015
but I was more concerned that SEAT as a whole might get the chop to help claw some cash back. I had a Seat Altea prior to our current family wagon and it was a good car.

16 January 2016
For God sake SEAT,you already have a Leon SC so just build this. I also think I would want to buy this car...and as a 3 door.