BACK TO ALL NEWS
Currently reading: 2016 Alpina B7 teased in new video
UP NEXT
Facelifted Mini could gain plug-in hybrid Cooper S variant

A new official teaser video of the upcoming Alpina B7 has been released ahead of its official debut this spring.

The model, which is the Bavarian manufacturer’s version of the 7 Series, is expected to be is one of its most important products, not only because of its popularity in the United States, where it is one of only two Alpinas sold through BMW USA, but also because it will help the brand’s introduction into China, scheduled for 2016.

The B7 also stands even further away from ‘regular’ BMWs because there is no high-performance M division version of the car.

Alpina generally produces two aerodynamic treatments for all of its models before deciding on one treatment after a session in BMW’s windtunnel. So it’s likely that the car caught on camera is testing the final production aero kit, with a deeper front spoiler, larger air intakes and small lip spoiler on the bootlid.

The next B7 is expected to use a more extreme version of the 4.4-litre twin-turbocharged V8 petrol engine that already features in Alpina’s B5 and B6 models. In the most extreme versions of those cars - the recently launched Edition 50 versions - it produces 591bhp, and it should gain a little more power on that figure in the 7 Series, so a figure in excess of 600bhp seems likely. That would make the B7 the most powerful Alpina road car in the company’s history.

The engine will be paired with a beefed-up version of ZF’s eight-speed automatic transmission, controlled via buttons mounted behind the steering wheel.

Alpina CEO Andreas Bovensiepen recently revealed that the firm could produce a smaller-engined version of the B7 to help with its progress in China. Offering a version of the car with a 4.0-litre V8 would get around Chinese tax rules, saving potential customers there thousands of pounds - although Alpina is likely to wait in order to gauge initial reaction to the car and brand in the new market before committing to the development costs of such a model.

Nevertheless, Alpina sees China as a key opportunity to support factory expansion and increase its sales, in the medium term, to beyond 2000 units per year (it sold just over 1700 cars in 2014 - a company record). “If our manufacturing increase and car sales are driven by our expansion into China, then Alpina is still exclusive because these are new cars and buyers who are not in western Europe or North America," said Bovensiepen. "We could go to 2500 units and still be exclusive.”

Earlier this month, the German brand announced it had enjoyed one of its most successful years in 2015 when it sold more than 1600 cars. 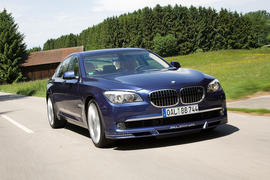