Porsche has unveiled its most powerful and fastest production SUV yet: the facelifted second-generation Cayenne Turbo S.

It now packs 562bhp at 6000rpm and 589lb ft of torque on a band of revs between 2400 and 4000rpm – all channelled through an eight-speed automatic gearbox to each wheel via an electronically controlled multi-plate clutch four-wheel drive system.

Porsche says the increased reserves are sufficient to provide the new 2235kg Cayenne Turbo S with an official 0-62mph time of just 4.1sec and 176mph top speed – figures that better those of the model it replaces by some 0.4sec and a scant 1mph respectively.

Revealed alongside the 911 Targa GTS at the Detroit motor show, the facelifted Cayenne Turbo S establishes lofty new power and performance benchmarks within Porsche’s SUV line-up. It is claimed to be the first production SUV to lap the demanding Nurburgring circuit in less than eight minutes.

An official figure made public by Porsche development boss Wolfgang Hatz at the Cayenne Turbo S's unveiling in the US reveals a prototype running on standard 21in wheels recorded a Nurburgring lap time of 7min 59.74sec during testing late last year – in the process beating the times Porsche development engineers have achieved in rival SUVs, including the BMW X5 M and Mercedes-Benz ML63 AMG.

Standard equipment includes Dynamic Chassis Control (which uses hydraulic actuators on the anti-roll bars to help reduce body roll during cornering), Torque Vectoring Plus (which continuously varies the amount of drive being delivered to each of the rear wheels for more neutral on-limit handling) and what Porsche describes as faster-acting traction management, which continuously varies the amount of power being delivered to the front wheels for added traction.

Distinguishing the Cayenne Turbo S from lesser Cayenne models are high-gloss black elements within the air ducts in the front bumper and lower part of the door mirror housings, along with body-coloured wheel arch extensions and a rear spoiler integrated in the upper part of the tailgate.

It also receives standard 21-inch wheels whose design resembles those fitted to the latest 911 Turbo and LED main beams as part of a standard dynamic light system.

Inside, the new Porsche features a new cream and black colour scheme in a leather-lined cabin featuring carbonfibre-look trims. 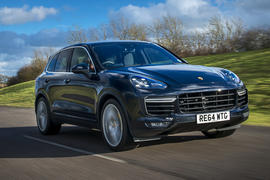 It's not quite the last word in fast, but with yet more power and torque from the twin-turbo V8, the Turbo is anything but moderate

So JLR must be wiping the egg off their faces now this beasty is out. It'll do the ring FIFTEEN SECONDS faster than the SVR (which isn't even out yet) that RR said held the record for an SUV round the ring. WRONG!!!
Rhys 13 January 2015

now I can get to the shops even faster, where I can then spend my money on more pointless, unnecessary things.