BACK TO ALL NEWS
Currently reading: 2017 Mercedes-Benz GLA facelift: prices and specs released
UP NEXT
All-new entry-level McLaren to be 600bhp-plus V6 PHEV

The Mercedes-Benz GLA prices and specs have been revealed; the facelifted model now starts at £25,880 - an increase of £620 over the outgoing car.

Entry-level GLA 200 SE spec cars kick off the range, and is one of three petrol variants; the other two being the GLA 250 4Matic and the hot Mercedes-AMG GLA 45 4Matic. The diesels on offer are both all-wheel drive offerings; the GLA 200d 4Matic and new-to-the-range GLA 220d 4Matic. The former is the most frugal in the GLA range, giving claimed fuel economy of 67.3mpg and 108g/km CO2.

The three trim levels; SE, Sport and AMG Line trims remain, while the AMG GLA 45 is more stand-alone, at the top of the range at £46,875. Mercedes has made keyless start standard, as well as Apple Carplay. A reversing camera is now available, at £330, providing the customer opts for the £1695 Premium or £2995 Premium Plus packs.

Two special editions sit at opposite ends of the range; the £31,600 Whiteart Edition, which is based on the AMG Line GLA 200, and the Yellow Night Edition of the GLA 45, which tops the range at £53,135; this adds the yellow exterior trim seen on the Detroit motor show display car, amongst its upgrades.

The GLA has received an extra petrol engine option and new range-topping trim level as part of its 2017 facelift.

Added to the car’s engine range is a 220 petrol unit that produces 181bhp and 221lb ft of torque. It comes exclusively with 4Matic four-wheel drive and slots between the two existing petrol units, the 154bhp 200 and 211bhp 250, which remain unchanged in the facelifted car. As before, the cabin features an 8-inch infotainment system but there are new dials and needles behind the steering wheel. There’s also a chrome finish for the electric seat controls and centre console stowage compartment surround.

The GLA gains a new range-topper called Yellow Night Edition, which gets more standard kit than the previous top model, the AMG Line Premium Plus. Available on every variant of the 2017 GLA, Yellow Night Edition cars are painted in black with yellow highlights and sit on alloy wheels wearing the same colour scheme. 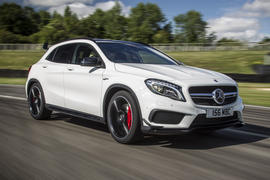 Artico leather and Dinamica microfiber material wrap the seats of Yellow Night Edition cars and are joined by an AMG Performance steering wheel in the cabin. Door sills, floor mats and air outlets are also finished with yellow highlights.

Elsewhere in the range, keyless entry and a 360-degree camera are new options. The most potent model, the AMG GLA 45, gets similar visual updates and retains its turbocharged 2.0-litre engine with 376bhp and 350lb ft of torque on offer. There are, however, shorter gear ratios for the car’s seven-speed dual clutch gearbox in gears three to seven.

First deliveries of facelifted cars in the UK are expected to begin in April.

Artico is NOT leather, its

13 January 2017
See alot around and it's interesting they're increasing the petrol engine choice.

19 February 2017
GLA 180se with 7speedauto must be available in uk and audi q2 rival small suv maybe based on Gcode must be launched available in europe earlist.........natural nomenclature to small suv is GL......GL series as GLS is based on S series now......GL160 with 7speed auto will surpass all marcedes sales chart records......ofcourse if merc dare to launch

19 February 2017
GLA 180se with 7speedauto must be available in uk and audi q2 rival small suv maybe based on Gcode must be launched available in europe earlist.........natural nomenclature to small suv is GL......GL series as GLS is based on S series now......GL160 with 7speed auto will surpass all marcedes sales chart records......ofcourse if merc dare to launch