BACK TO ALL NEWS
Currently reading: Holden moves to safeguard its future in Australia
UP NEXT
Porsche Taycan: new rear-driven base model takes price to £70k

Holden moves to safeguard its future in Australia

Holden, the Australian arm of General Motors, is trying to secure a long-term future beyond 2016 with AUS$265 million (£155 million) of additional government investment, a two-year pay freeze for workers at its Adelaide manufacturing plant, and talks with other GM brands on how they can better utilise Holden’s test track facilities.

The locally produced Commodore and Cruze models are losing money for GM in Australia. The break-even point for designing and building the Commodore in Australia is 40,000 units. Last year, 30,000 were sold.

Holden still retains several advantages compared with Ford of Australia, which will cease local production of the Falcon from 2016. Falcon units had dropped to 10,000 units per year, whereas Holden also exports the Commodore in limited numbers.

Holden is recognised as a rear-drive specialist within GM. It designed the Chevrolet Camaro (whose rear suspension module is in the Commodore). It also has an advanced design centre that’s one of only two in GM that can build a full-scale, functioning concept car.

Should Holden close, the future of Holden Special Vehicles wouldn’t necessarily be as bleak as that for Ford Performance Vehicles.

HSV, which makes models badged as the Vauxhall VXR8 in the UK, is completely independent of GM. 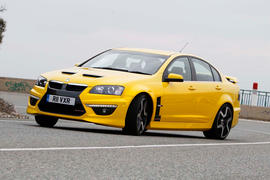 The Vauxhall VXR8 is an unsophisticated sledgehammer that is engaging, entertaining and very different from the German super-coupés that it rivals

It would appear that GM and Holden have been complacent with this brand.  Relying on old school technology they have failed to develop their cars at the same pace as German and Japanese rivals.  Poor industrial relations will only harm matters further.   It all sounds very familiar to the British car industry of the 70 & 80’s.   The writing would appear to be on the wall for the ending of domestic  car production in Australia as I cannot see any other manufacturer rushing to buy Holden from GM should GM decide to call time on their losses.  I doubt the Chinese would have much interest either?

Is this the same GM that under invested in Saab and watched them crash and burn, not forgetting Oldsmobile, Pontiac, Saturn & Hummer. All great brands with so much potential. Surely they can't mess up many more? GM really are useless when it comes to "knowing the market".

Holden is not prestige

Why would Holden come to the UK and become a prestige brand. In Australia it only has 1 of its OWN locally produced cars, based on old an old platform. It also builds chevrolet's Cruze and badges it as a Holden and badges Chevy built carsas its own. Holden is not prestige - it's Australia's Chevrolet.

Most people have also never heard of Holden, unless you're a car buff, and so would require more marketing money to build the brand.

Vauxhall (and Opel, but it does not get this car) is trying to push upmarket, so bringing in another brand above it would make no sense. Vauxhall is just using this as a halo car.

Remember GM also has Cadillac that it's trying to push in Europe. I think 3 brands, which at this moment are not separated well enough, is hard enough for them, they do not need to bring in another.