BACK TO ALL NEWS
Currently reading: Exclusive: McLaren plans to sell stake in F1 team to secure future
UP NEXT
Volkswagen committed to 'entry-level' ID electric models

McLaren is in discussions to sell a share of its Formula 1 team to fund its medium-term future, Autocar can reveal.

The Woking-based company has been hard hit by the coronavirus-caused shutdown, repeatedly making headlines as it sought to raise funding to stay afloat as the crisis dragged on. The situation was made more complicated by a clash between McLaren's shareholders and some of its bondholders as to the long-term goals for its Automotive, Racing and Applied divisions.

That situation was eased last week when McLaren secured a loan from the National Bank of Bahrain for £150 million at favourable interest rates, but its shareholders are now reported to have given the go-ahead to investigate other ways of raising funds to secure the firm’s medium-term future on a stable footing for the next five years.

While plans are reported by Autocar sources to potentially include selling part or all of Automotive and Applied Technologies, a McLaren insider insisted that the only advanced discussions were focused on selling a minority stake in the Racing division, as well as denying any conversations in regards to a sale of Automotive. Racing encompasses the McLaren Formula 1 team, which hit the headlines at the weekend when Briton Lando Norris scored his first podium finish in the season-opening Austrian Grand Prix.

McLaren’s bond holders and board are believed to have given the go-ahead to explore offers of interest in this last week. When approached by Autocar, a McLaren spokesman said: "We are considering the option of additional investors in the Racing business."

The most recent insight into the McLaren Group’s value - comprising all three divisions of the firm - came two years ago, when Michael Latifi, father of Williams F1 racer Nicolas Latifi, bought a 10% share for just over £200m, suggesting a valuation of more than £2 billion at that time. However, with the upcoming F1 cost cap imminent, potentially making the team more profitable, it's possible that valuation, plus the team’s upturn in form, could raise the price of a share in the race team.

Parallel to this, a sale of Applied - a company that uses McLaren’s racing-derived expertise, particularly on data, technology and teamwork, and applies it to everyday industries, most notably in health and public transport - is also believed to be being discussed. However, that's said to be complex, because of the firm’s reliance on its racing team links in order to thrive.

Selling Automotive, either in part or in whole, was reported to by a source to Autocar to have been discussed, but the McLaren insider denied this is the case.

McLaren announced that it was cutting 1200 jobs - around a quarter of its workforce - in May as part of a cost-cutting scheme, with the vast majority coming from the Automotive division, but the firm was highly profitable prior to the pandemic.

No timeline for the potential sale of a stake in the F1 team has been given, but one source has suggested that talks are already well advanced, with more than one potential investor interested in the opportunity to buy into the team.

Coronavirus and the car world: how the industry has been impacted 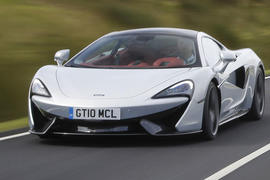 Tata should buy McLaren. Jaguar should then become Mclarens engine supplier and McLaren should provide Jaguar with an XJ220 replacement.

Jaguar gets F1 recognition in the McLaren Jaguar team and a range topper on the cheap. Mclarens short term cash flow issues disappear.

It won't happen but it should.

As I said , McLaren in their

As I said , McLaren in their purist folly, have brought this upon themselves. 'We're too clever by half to make a SUV it's against our morality' etc etc.

Well now Koenigsegg will launch a proper 4 seater hypercar that will be cheaper than the Speedtail. Oh my!

Bernie!, maybe Mr Ecclestone would chip in a few coppers?