McLaren has secured a £150 million loan from the National Bank of Bahrain (NBB), a major boost for the British firm after it said it had fallen into “severe and unexpected” financial trouble due to the impact of the coronavirus pandemic.

The ‘financial facility’ extended to the McLaren Group was confirmed by the NBB in a filing to the Bahrain stock market and will provide vital cashflow after struggles for both the firm’s Automotive and Racing divisions.

Sales of McLaren’s sports cars have fallen sharply due to the coronavirus lockdown, with the firm’s factory also forced to close for an extended period. Meanwhile, the suspension of the Formula 1 season meant there has been no sponsorship, prize or television rights income for the Racing division.

McLaren is currently taking legal action against a group of creditors to secure capital by issuing a bond against its factory and classic car collection. In a filing to support that bid, the firm said it faced insolvency if it did not secure extra cash. While that action is ongoing, the loan from the NBB eases imminent concerns over the firm’s future.

Bahrain’s sovereign wealth fund, Mumtalakat Holding Co, is the majority shareholder of the McLaren Group, with a 56% stake in the firm. Mumtalakat also has a 44.06% stake in the NBB, with the Bahrain government owning another 10.85%.

Coronavirus and the car world: how the industry has been impacted 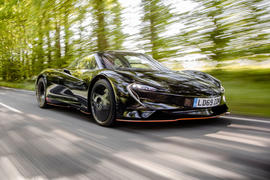 Good news but surely its only putting a band-aid on a bigger problem. A no-brainer for the lender but I suspect nowhere near enough to put McLaren on a stable financial footing. Most owners and would be owners of used Macca's I know cross shop the 'regular' McLarens with say GT3, GT3RS and 458/488. All are 'toys' and most people don't want to lose big money. Hence they end up buying used GT3/GT3RS or 458. Not surprising the depreciation on Macca's is so high, theres so few buyers for them used, that's before the scary subject of reliability, costs and dealer network (USA). I really appreciate McLaren's products, but like the Rangie, only have one from new, and only if someone else is picking up the tab.

Boris donated half his fee for his memoirs?

If they were trying to get a loan secured on royal jewels, and didn't manage to do so, the only chance was seeking support from shareholders. Or filing for bankruptcy. Luckily, new capital or, like in this case, funding from a bank owned by the parent company finally arrived. Really, really big troubles.

Don't get me wrong, but the very poor residuals on any of the recent McLarens - F1 aside - should have rang a bell. Still a long, long way to the top (competing with Ferrari) if you want to rock 'n roll. Despite all support received from British journalists' community.