BACK TO ALL NEWS
Currently reading: London Congestion Charge-free cars
UP NEXT
High-riding Porsche 911 prototype hints at rally-inspired variant

Changes to the London Congestion Charge mean that vehicles which fall above the 75g/km CO2 emissions threshold will soon be charged for going into the capital.

Now standing at £10 a day, the fee is levied on motorists who enter the area bounded by London’s inner ring road on weekdays between 7am and 6pm. Those who fail to pay up risk getting their number plate snapped by the ANPR cameras that surround the zone, and paying a £130 fine.

Since 2008, cars with emissions of less than 100g/km CO2 have been exempted from the charge. From this month, however, some of those vehicles place above the new threshold, and so will have to pay the charge. Worry not, however, because the Government has implemented a 'sunset period' lasting until July 2016 for those owners to either pay up, or find a new car.

If you are in the market for a super-frugal, congestion charge-beating car, here's Autocar's top picks.

These triplets are all based on the chassis of the Mitsubishi i-Miev. As with Mitsubishi's city car the small footprint, good visibility and tight turning circles found in these models make them ideal for the city. The 63bhp electric motor in the i-Miev provides good acceleration to 30mph but isn’t at home outside of stop-start city traffic. Faster driving, especially in winter, will see a signification reduction from the claimed range of 93 miles.

The Nissan Leaf enjoys high levels of comfort and refinement, despite losing some of its space to large battery packs. Equipment includes a sat-nav that shows charging points along the route, and air conditioning that can be controlled from your smartphone. The second generation version has a claimed range of 124 miles, and can be fully recharged in just four hours when using a fast-charger.

Officially, the Renault Twizy is classed as a quadricycle rather than a car. With a top speed of 50mph, and a range of just 50 miles, it’s definitely designed for the city. Windows, and even doors, are optional extras, while luxuries like air-conditioning, a heater and even a radio just aren’t available. But if any car deserves the label ‘go-kart handling’, it’s this. What the car lacks in practicality, it makes up for in fun and personality.

The Fluence is part of Renault’s four-pronged electric vehicle line-up, along with the Twizy, Zoe, and electric Kangoo Van. It has strong acceleration, but is limited to 84mph to conserve energy. The 1605kg weight means it’s not suited to sporty driving, but rather encourages a more relaxed style. The range is 125 miles, and a full charge costs less than £3.

With the UK’s preference of hatchbacks over saloons, Renault expects the Zoe to be a stronger seller here. 0-62mph takes 13.5 seconds, but using that acceleration the whole time won’t see you achieve the claimed 130 mile range. Handling is tidy, but those heavy batteries bring the weight to 1,468kg, making this a heavy supermini. 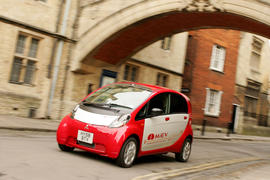 The second generation Smart ED is appreciably more accomplished than its predecessor. With 140kg to lug around, and just 40bhp to do it, it isn’t quick off the line, but the seamless torque makes it a cinch to drive in town. Charging the batteries works out at a mere £1, but that’ll only get you 60 miles before you need to plug it in again.

The Model S is the only car on this list that’ll seat seven, and does so with the addition of the two optional rear jump seats. Without the extra seating, the volume of the front and rear boots adds up to a massive 820 litres. This car is as fast as it is practical – with 416bhp, it reaches 62mph in 4.2 seconds with the 85kWh cell. Range is between 230 and 300 miles, depending on choice of battery.

The Vauxhall Ampera is a rebadged version of Chevrolet’s Volt, although both models are on sale in the UK. The car has a real-world range of 33 miles, but once the batteries are out of juice a petrol engine cuts in to recharge them, all totally seamlessly. Daily driving can therefore be done on electricity alone (a full recharge costs about £1), but longer journeys can be completed without any range anxiety.

The V60 Plug-In Hybrid works in a similar way to the Volt but, instead of a petrol motor, has a 212bph, 2.4 litre turbodiesel. It can be driven as a pure electric car, or with both the diesel engine and electric motor working together. Unfortunately the low-resistance tyres make the ride too firm, and the Hybrid’s 250kg weight penalty makes itself felt.

It may look like a normal Prius, but the plug-in version allows it to be charged from the mains, and travel 12.5 miles on electric power alone. The car is brisk and nimble and, like a regular Prius, the switchover between petrol and electric power is imperceptible. There is, however, a £12,000 premium over the normal Prius.

Unlike the old Panamera Hybrid, the E-Hybrid features a lithium-ion battery and the ability to charge from the mains. It now weighs a hefty 2095kg, but still cracks 62mph in 5.5 seconds. It can complete up to 22 miles on battery power before the petrol engine cuts in, but top speed is limited to 84mph when running on pure electric power.

Or any car with illegible, or foreign number plates?

Seems like a pretty random list of obscure cars. I suspect that the only common factor is that they're all going to be purchased as second or third vehicles, further adding to the, err, congestion on our roads...

If ther are to be exceptions, then why not have a simple rule like any vehicle less than 3 metres in length, or below 800 kg weight?

The current CO2 based system is just daft.

Unless people develope the ability to drive 2 or 3 cars at the same time I can't see how having an electric or hybrid on your drive will increase congestion, But I do agree that the Co2 systerm of taxation is flawed and is simply another way the government is using the motorist as a cash cow, and indeed the manufacturers are simply designing cars to have a low test result that is not achievable in the real world.

I can't believe Toyota charge an extra £12,000 for a charging cable and a socket on the side of the car. Eco rip-off.

I can't believe Toyota charge an extra £12,000 for a charging cable and a socket on the side of the car. Eco rip-off.

They don't.  Some of it is extra gadgets over the standard Prius (ok a bit), the rest is the considerable additional cost of the lithium ion battery and charging hardware.  The standard Prius has a much cheaper and smaller (in terms of energy density) battery.

I wonder how Lexus sales will do with these new rules. The whole point of the RX Hybrid was to have your SUV Cake and enjoy it for free in the C Zone.

.....and the battery capacity will not be determined by how far you want the car to go in EV mode but simply what size of battery you need to get the CO2 to less than 75g/km on the EU test.

No thanks. I live in the real world.

Is it just me, or does it seems rather silly to spend, at the very least, £7k on a Renault Twizy to save a congestion charge of £10 per day?  Surely congestion is caused by the number of vehicles rather than how much they emit and, on another topic, how long before the rate is based on 75g/km as well to qualify for exemption from VED.  Luckily I live in Scotland and, at the moment, we don't have a congestion charge in any of our cities.  No doubt we will, in the future!

Maybe because if you drive in

it pay it every day.