BACK TO ALL NEWS
Currently reading: Toyota Aygo reinvented for young buyers
UP NEXT
Lotus confirms new sports car, end of Elise, Exige and Evora in 2021

The new Toyota Aygo has joined its Peugeot 108 and Citroën C1 siblings in making its world debut at the Geneva motor show.

Aimed at convincing the "young and urban" market that it's a car "to have fun in", the new Aygo has been styled to stand out in the city car segment regardless of how its dramatic looks might polarise opinion, according to the car’s chief engineer David Terai.

Toyota thinks that the Aygo’s dramatic X-motif nose design, ‘double-bubble’ roof and sharply drawn side window graphic will help it to stand out in a segment that is much more competitive than it was when the original Aygo was launched in 2005. Back then, there were only five city car rivals; today there are 20, according to Toyota.

The Aygo has the highest individual market share of any Toyota model and has, according to its maker, an impressive track record of attracting new buyers to the Toyota brand and then keeping them in the fold.

At 3.75m in length the new Aygo is just 25mm longer than the outgoing model, and its track is just 8mm wider. Despite the small dimensional increases, Toyota says driver space has increased (partly by liberating more headroom by lowering the H-point of the front seat) and that the cabin feels much more spacious because the centre console and screen have been pushed back by 50mm.

The new city car, which will be offered in both three-door and five-door guises and with an optional roll-back canvas roof, will also stand out from the mainstream by offering a flexible customisation programme allowing buyers to specify the colours of the nose cone, wing flashes and rear bumper insert as well as much of the trim on the centre console and doors.

Buyers or second owners will also be able to change or ‘refresh’ the exterior and interior trim with relative ease. The only engine to be available at launch will be a 68bhp, 1.0 three-cylinder petrol. 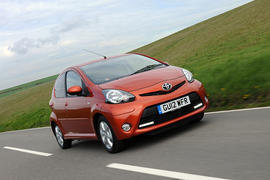 I wonder what type of

I wonder what type of discount is available on the out-going model. The old Hyundai I-10 is available at £5999, I imagine the soon to be replaced Citroen C1 will be available at least as cheaply as that,
Turismo 4 March 2014

No mention of weight which

No mention of weight which must mean it is heavier than the model it replaces.
Mini2 4 March 2014

No mention of weight which must mean it is heavier than the model it replaces.

I think the C1 and 108 are both considerably lighter than the previous versions at around 845kg-ish. Might be wrong but it gives the weights in the Citroen article so I'd expect them to be pretty much the same.

Well at least wrapping it

Well at least wrapping it around a lamppost will improve the looks. I can't believe this is a real car, not some crack-fuelled concept destined to be hidden away forever and dragged out for those end-of-year quizzes about automotive disasters.
View all comments (6)