BACK TO ALL NEWS
Currently reading: Vauxhall Insignia Country Tourer shown
UP NEXT
2021 BMW 4 Series Convertible arrives with 369bhp range-topper

The Vauxhall Insignia Country Tourer has been revealed at the Frankfurt motor show. It will act as a rival to Audi's A6 Allroad, with sales expected to begin before the end of the year.

The car, which has previously been spotted testing, will be powered by a choice of three engines at launch, including one petrol and two diesels. The entry-level 2.0-litre CDTi turbodiesel unit produces 161bhp and 258 lb ft of torque, which can be temporarily increased to 280lb ft via an overboost function.

A 195bhp 2.0-litre CDTi BiTurbo engine sits in the middle of the range. Thanks to a sequential two-stage turbocharger the unit can produce 295lb ft of torque.

The sole petrol option at launch will be the 2.0-litre SIDI (Spark Ignition Direct Injection) Turbo, which produces 247bhp and 295lb ft.

Vauxhall has given the Insignia Country Tourer a wider and deeper front grille with a silver chrome insert hinting at the protection plate underneath. Twin chrome tailpipes feature at the rear, while grey side cladding, prominent in these pictures, is designed to protect the flanks of the Country Tourer from off-road obstacles.

The car features an electronically controlled 4x4 system which can vary torque at both the front and rear axles of the car continuously. Vauxhall is confident that its system, in conjunction with electronically controlled suspension, will offer good control on off-road surfaces. The car uses a latest-generation Haldex system to manage its torque, meaning that the car can switch to front wheel drive four-wheel drive isn't needed. 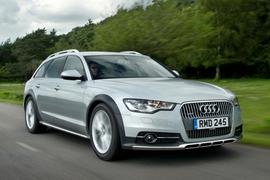 It will be interesting to see if all models get the 4x4 system as standard fit, knowing its extra cost and the blunting effect it has on fuel economy and CO2 figures, and the recent penchant for car makers to offer it only on some top end variants in the model line up - see the recent Volvo V40 XC as an example.

really smart. Infact, i know in terms of the mondeo v's insignia, the mondeo always appears to be the favourite....I don't know...i've never driven either. Somehow the insignia both in saloon and estate looks really good. It needs to be cheaper, or the price differencial needs to be more pronounced then the Audi estates. Discounts will mean it's more attractive (price wise) then a Octavia Scout. It's looks great.

I wondered what happened to

I wondered what happened to all those left over bits of plastic from the Rover Streetwise (Maybe Rover were on to something afterall).

Actually, this is quite a good looking car. Combined with Vauxhalls reasonable list price, and excellent discounts i can see this selling quite well.

The facelift has worked very well on the back of the Estate. Good one Vauxhall/opel.

Good looking car, just a pity that it is unlikely to sell well in the UK. I am afraid the writing is clearly on the wall for Vauxhall / Opel, combination with PSA or not.

just what i needed after the allroad came out 50 years ago.

If the looks are anything to

If the looks are anything to go by I think they've got it right. Judging by the other comments here, the overalll sentiment seems to be the same.

There's more than a hint of Mercedes new corporate front end in the headlights and grill which, if people make that connection, can only be a good thing for Vauxhall and the public's perception of the brand.  Will it sell in the numbers they need?  Who knows, only time and the people in the market for this kind of vehicle will tell. And perhaps the quality of the dealer network which seems to be a common gripe as for me, Vauxhall are making good quality, stylish and desirable products. A badge snob I ain't; the new VXR Astra is on my wish list for how it looks, the interior and the favourable reviews it's had by the press at large (though I've yet to drive one)....

It's funny what a badge can do ... The placement of Opel's simple "lightning bolt" badge on the grille works wonders for the Insignia; something that the "griffin and flag" doesn't ...

How the hell does switching

How the hell does switching to frontwheel drive when 4x4 isnt needed reduce weight ? ! Ok, it could jetison the extra diffs and propshaft after it switched to frontwheel drive, but how can it go back to four wheel drive after its done that ? Maybe it carries spare diffs and a prop shaft, but that would mean several trips to a dealer a day to replace the spares, (surely it wouldnt carry more than 1 set) so it could switch back to 4x4. Or maybe the writer is just talking nonsense ? !

don't get the love for the styling of this, huge Merc grille and all. Still, at least it is no worse than the Allroad, not that I have ever seen one on the road.