The story of Scalextric: how slot car racing is going digital

One UK maker started to electrify its car range 60 years ago: Scalextric. Today, its racers are using digital tech. We give it a try
Share
Open gallery
Close
Share story
by Autocar
Follow @@autocar

“This is very similar to the first one I designed,” says Jamie Buchanan.

He’s pointing at a 1:32-scale 1990s Renault Laguna touring car that’s housed in one of the many display cabinets lining Hornby’s visitor centre in Margate, Kent.

We're here to mark the 60th anniversary of a toy that has enthralled young car enthusiasts and aspiring racing drivers the world over: Scalextric. “In those days, we would take countless measurements and photographs of every car,” says Buchanan, who in 25 years of working for the slot car brand’s parent company, Hornby, has graduated from being a designer to heading up product development. 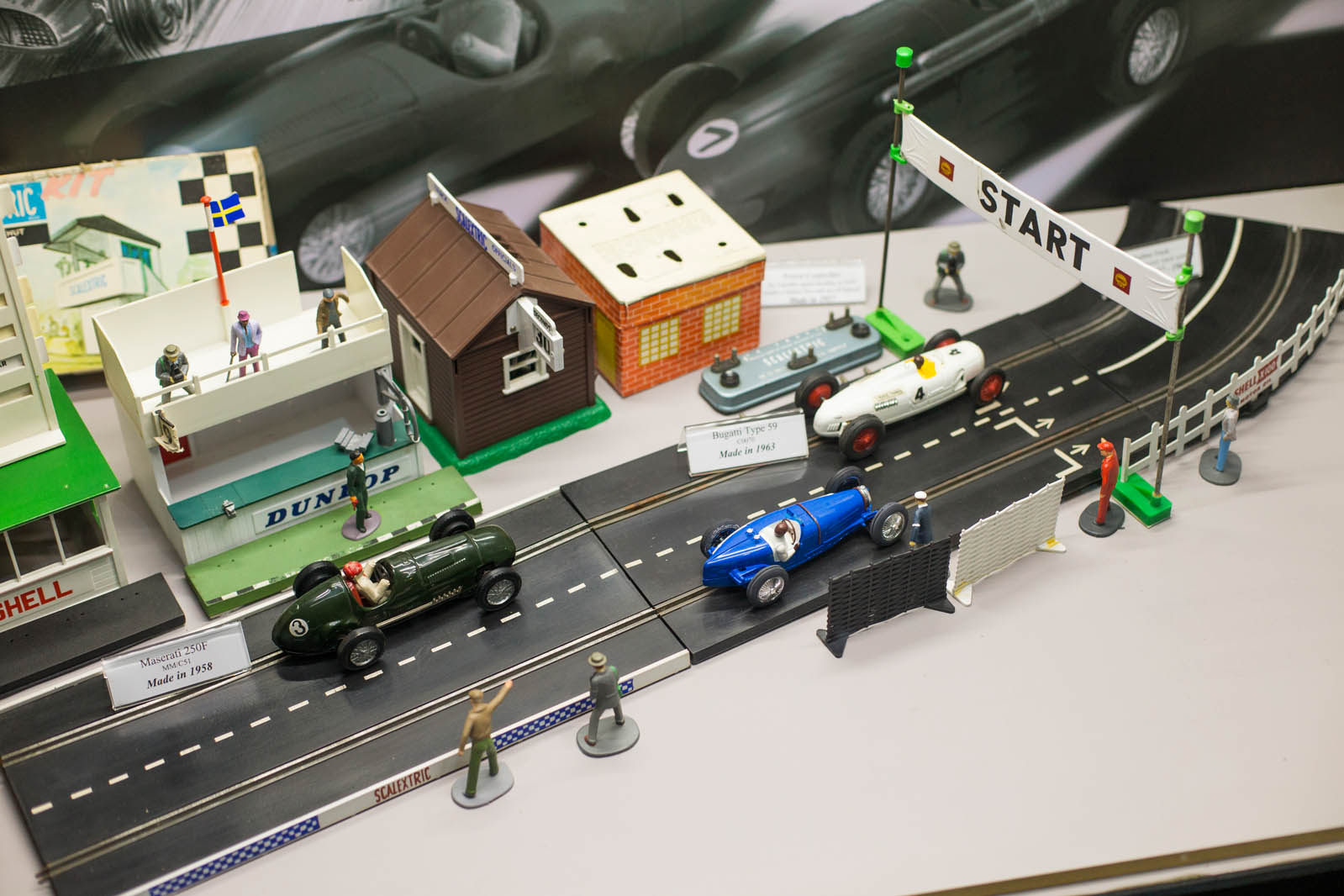 “We would then plot these in two-dimensional CAD and a model maker would cut the profiles out of plastic to prove out our design with a prototype. Following this, a pattern maker would produce a wooden pattern of the shape of the car, which was then used as the basis for a mould.” The eventual production run could be completed in a week, but to get to that point would take as long as two years, so involved was the process of securing licences. designing the car to be as realistic as possible and making the mould tools.

A similar desire for realism was evident in the Maserati 250F of the very first Scalextric set, which was launched at the Harrogate International Toy Fair in 1957 under the Minimodels brand. It was the invention of Bertram ‘Fred’ Francis, who had been seeking to broaden the appeal of his clockwork motorised Scalex toy cars. The answer was to add electricity – hence the ‘tric’ – so the cars could be driven around a track using a simple on/off button via a separate terminal box. 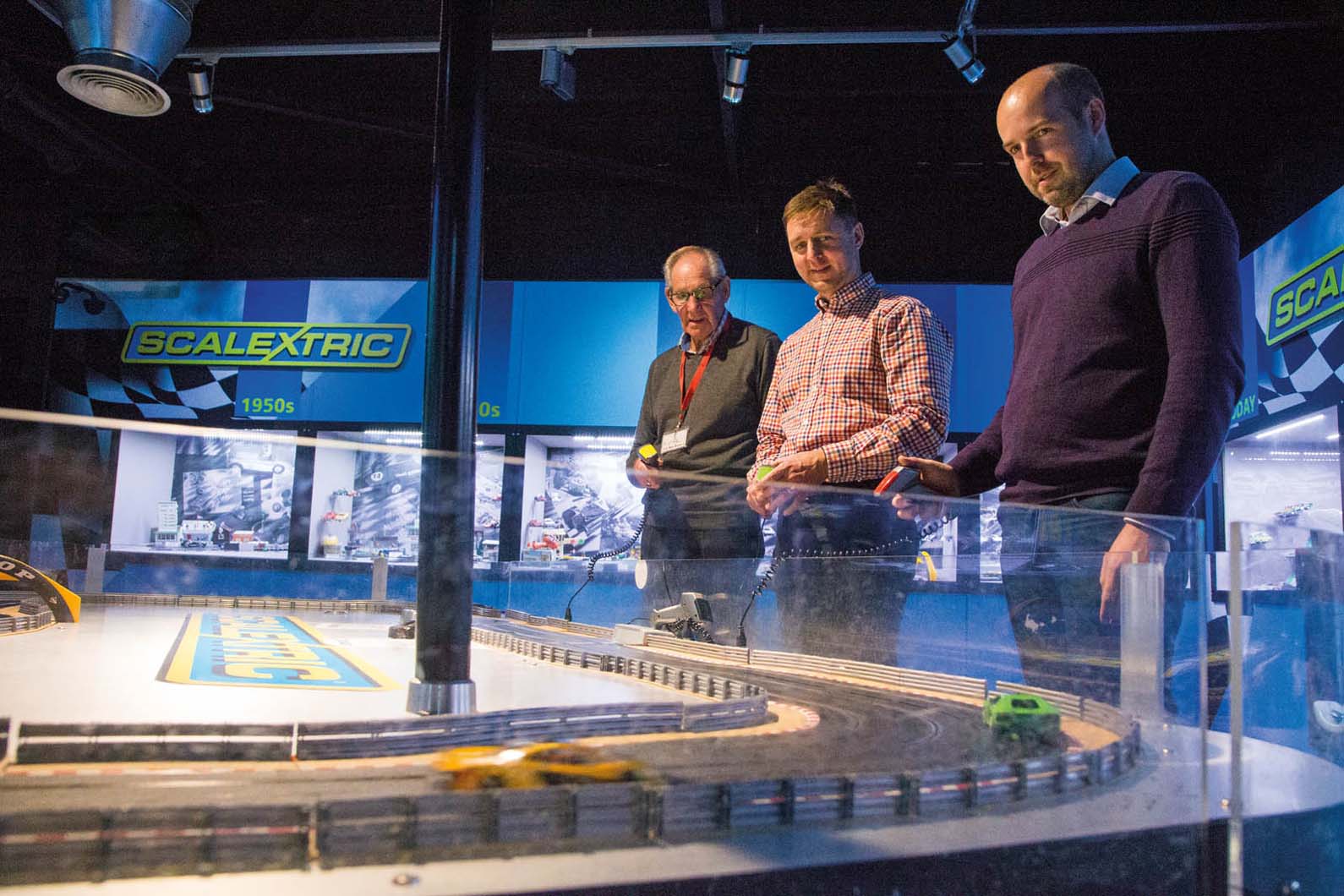 As the controllers evolved, so did the cars and their motors, meaning higher speeds and, inevitably, more crashes. To begin with, the flat rubber track was changed to a plastic one with dimples to give more grip, but it wasn’t until 1988 and the arrival of ‘magnatraction’ (a small magnet in the bottom of the car) that adhesion levels were truly addressed.

The design process improved too, most notably with the adoption of three-dimensional CAD software in the mid-1990s. As a result, the time taken to go from design to production was reduced to around 10 months.

Behind all this, of course, is the story of Hornby, a great British company with roots that can be traced back to 1901 and whose toys have delighted millions. At its peak, Hornby employed around 2000 people in Margate. When production of many Hornby toys, including Scalextric, started to move to China in the late 1990s, the old Margate factory lived on as a distribution centre. However, with that having moved to Canterbury in 2014, as well as Hornby’s headquarters to Sandwich, all that remains in the seaside town today is the visitor centre. 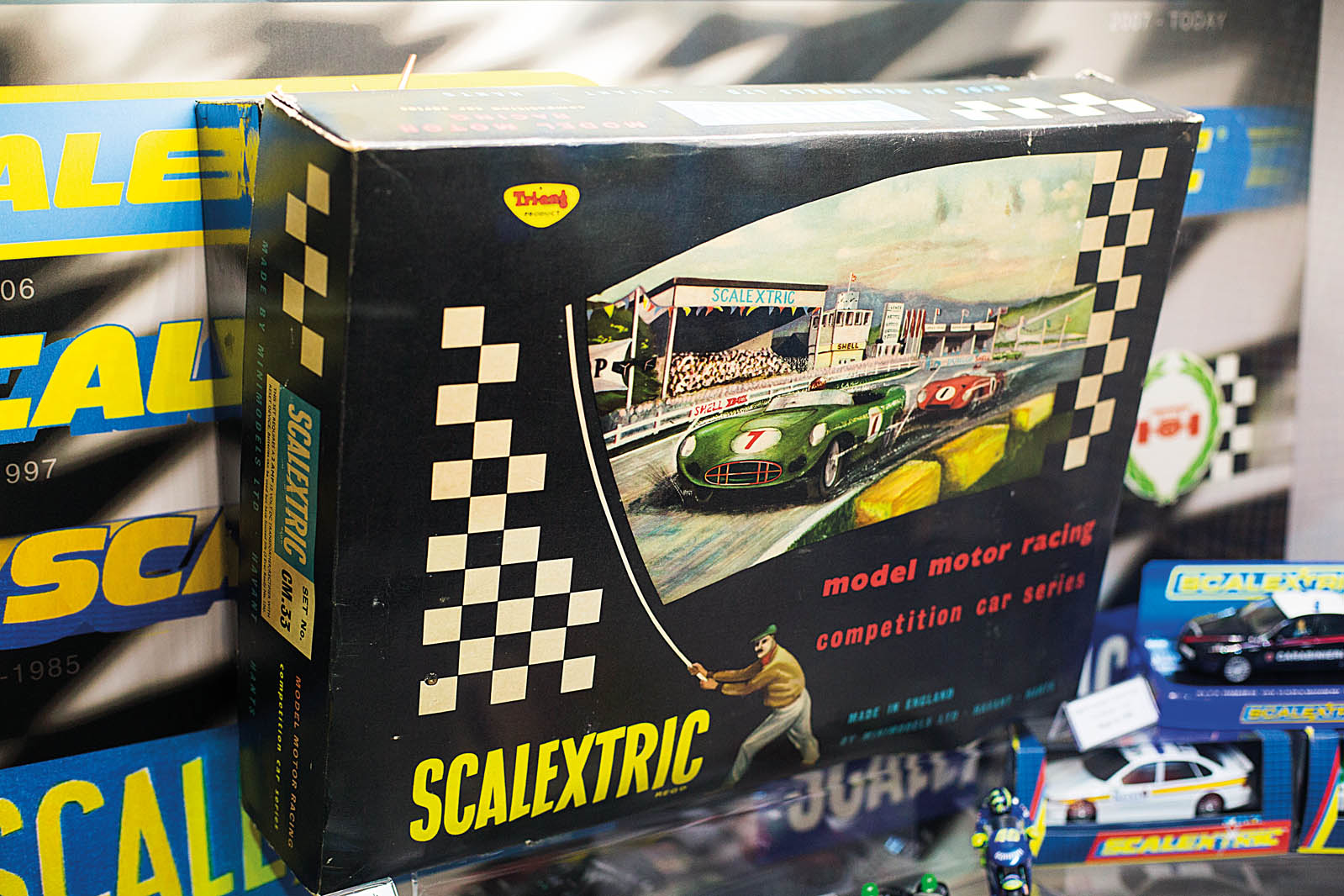 It is staffed by a team of seven that includes Peter Oliver, a veteran of 50 years at Hornby. Now 81, Oliver started in the customer service office in 1967 before setting up a print room in the 1970s where he would take care of instruction leaflets and parts lists. These days, Oliver runs guided tours of the visitor centre, so perhaps I should be more wary when he challenges Buchanan and me to a race around its Scalextric demonstration track. Sure enough, his McLaren P1 leaves us for dust.

In my defence, it’s the first time I’ve raced a Scalextric digital set, which allows up to six cars to compete on two lanes. Much like the move from tinplate to plastic bodies, or the introduction of magnatraction, the digital technology represents a subtle evolution of an enduring product.

Another has been the Scalextric ARC app, which, through a Bluetooth-enabled Powerbase, lets players set race type and distance, record lap times and even schedule pit stops. At the end of a race, results can be shared via social media, once again helping this satisfyingly hands-on toy sit more comfortably in an online world.

Who knows, with a bit of practice, you might even beat Oliver.

From the archive - five fabulous sets worthy of a place in any collection:

1981-1983 - Not every Scalextric set is about getting to the finish ahead of your opponent. In Super Stox, the aim was in fact to crash, using the 360deg guide blade to spin your car around and drive head-on into your opponent, sending bodywork flying. 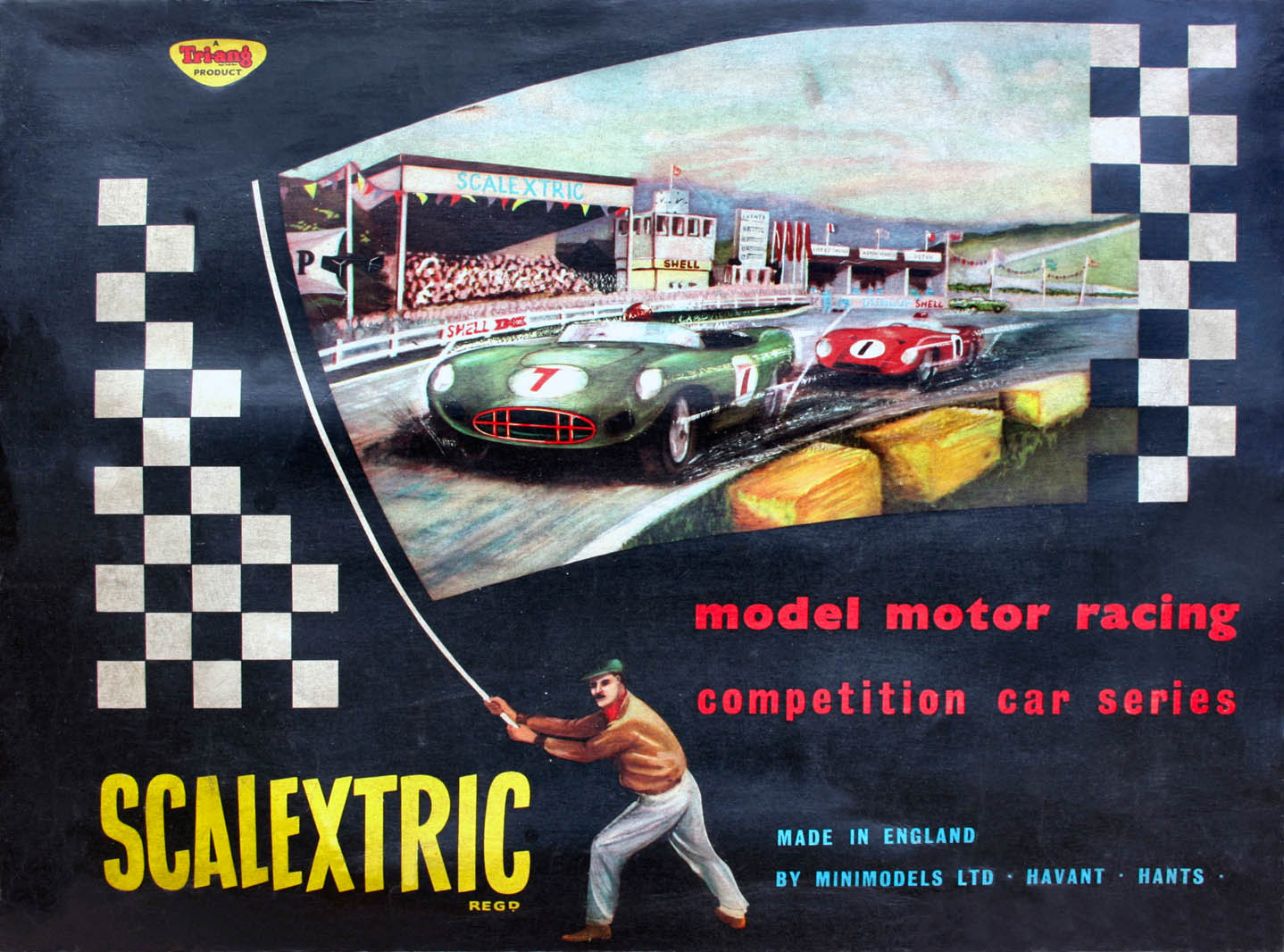 1957-1960 - It’s still possible to track down early Minimodels or Tri-ang sets with rubber track and tinplate cars, although condition varies enormously. With prices in the hundreds – and even thousands – of pounds, these are for serious collectors only. 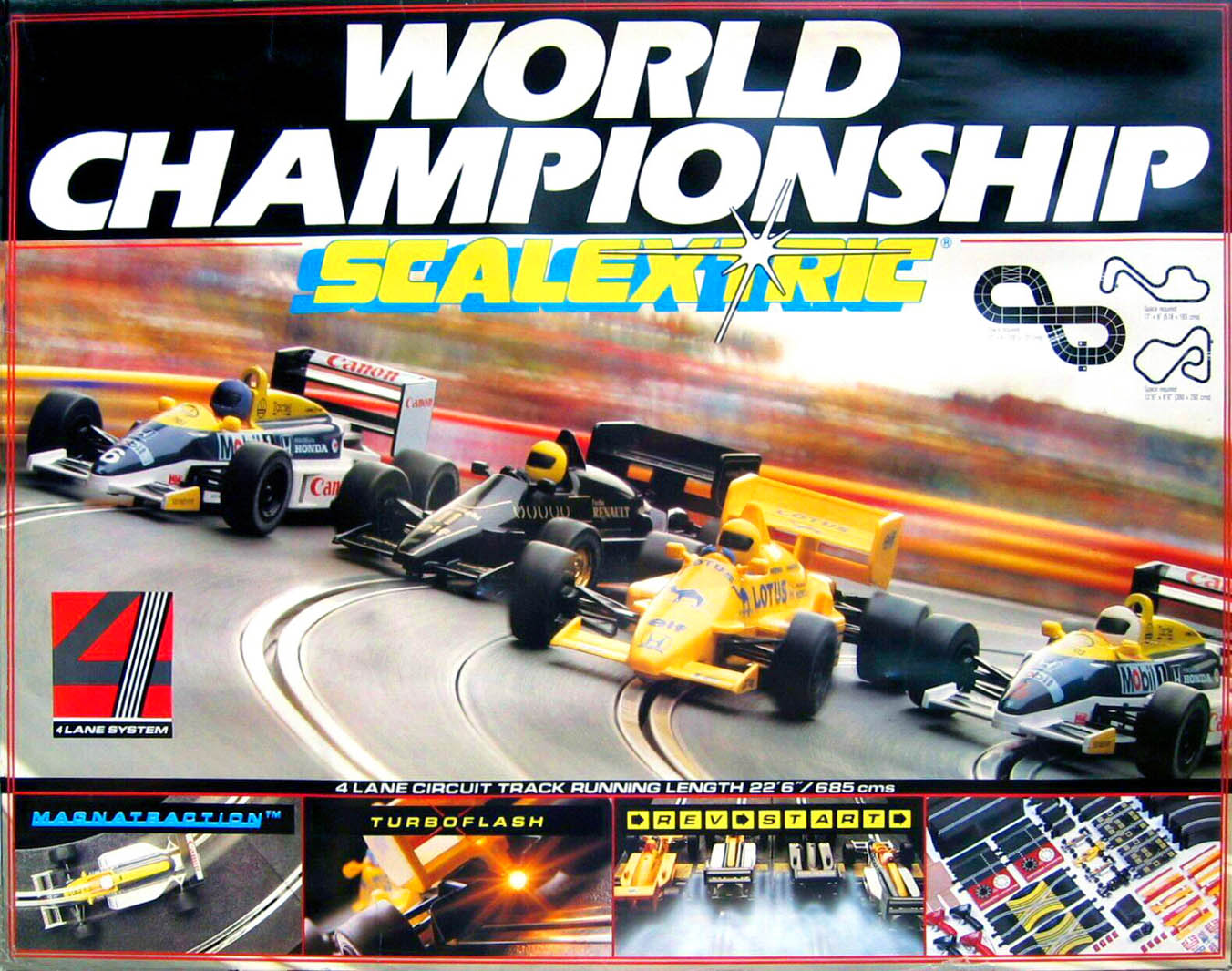 1988-1993 - Four lanes, two rev starts (complete with vaporising baby oil for tyre-smoking effect), a pair each of Williams and Lotus Formula 1 cars and lap counters to keep track of who is in the lead: the World Championship set had it all. 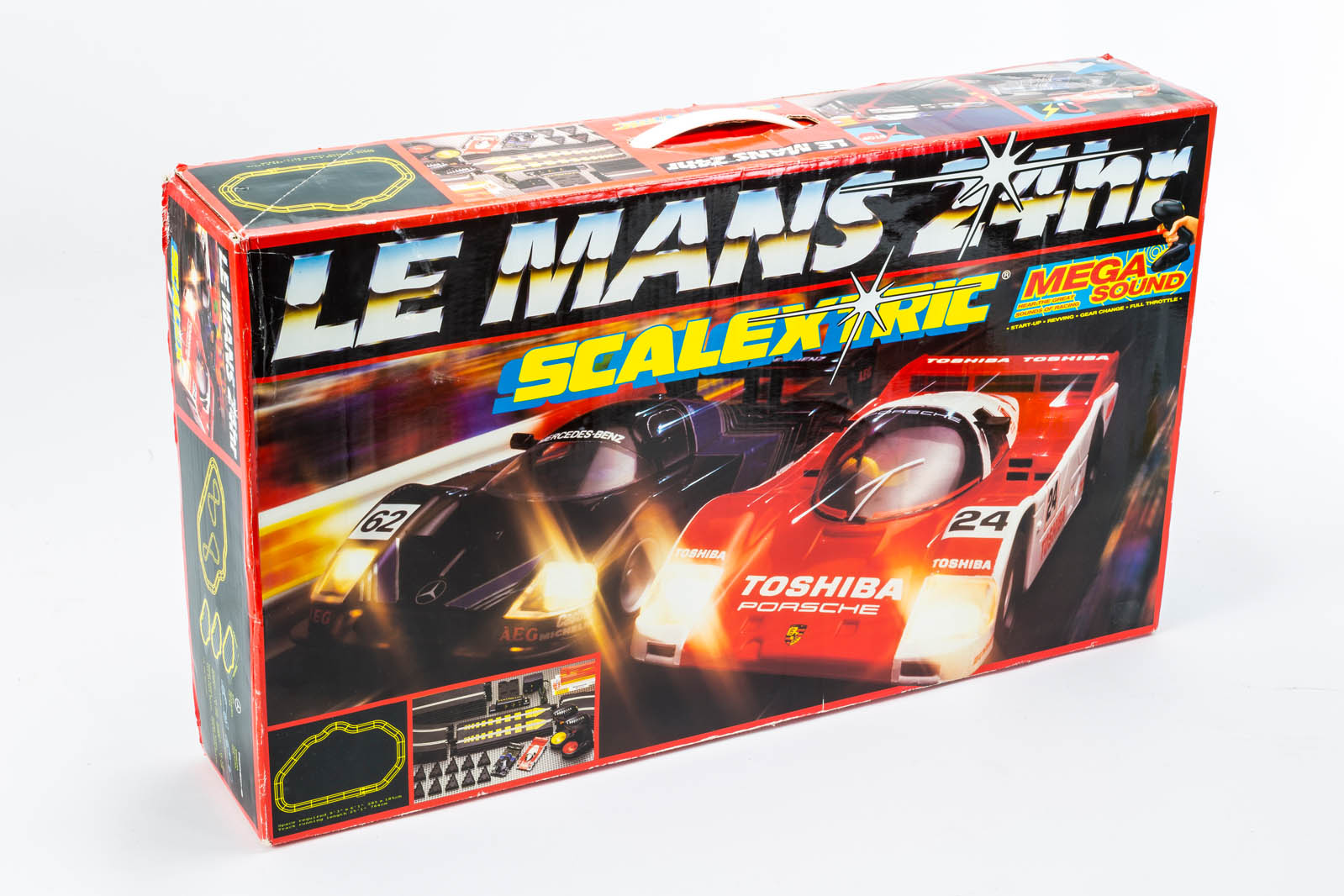 1994-1996 - Le Mans has long been one of the flagship sets in the Scalextric range. By the mid-1990s, it featured the Group C Sauber-Mercedes and Porsche 962C equipped with fully working front, tail and brake lights, allowing players to race into the night. 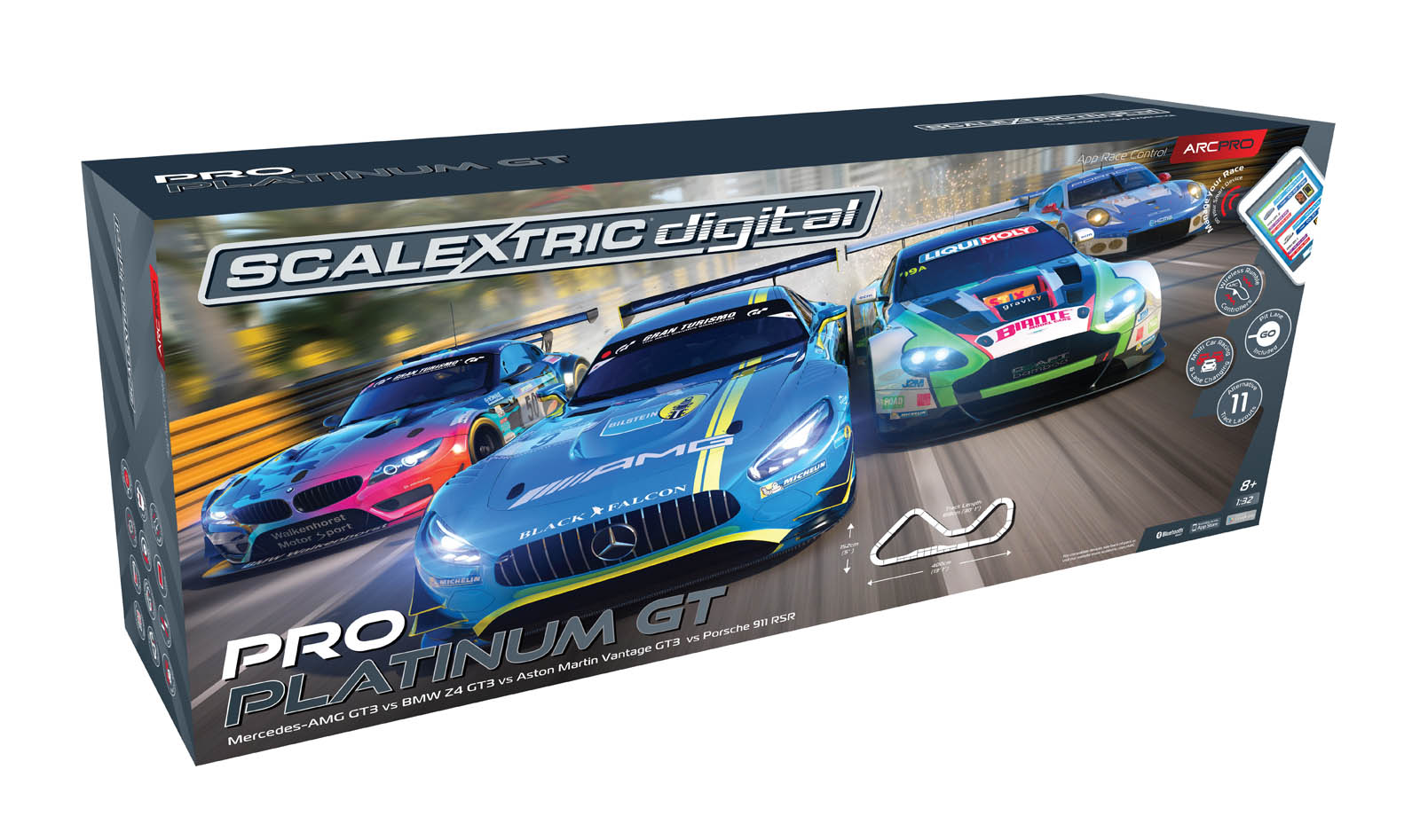 2017 - The latest addition to the Scalextric range combines digital technology with the brand’s race control app to create its most sophisticated set to date. It costs £550 and, by no coincidence, landed in shops just in time for Christmas.

In the year 2000 I sold my 1960’s set with the Cooper climax and Shark nosed Ferrari plus two other Cars for £140.00, it was my fav Toy, then my years later I bought my boys a set and they disnt take to it because Kids are now into gaming more, a shame really, but. That’s life I suppose...

Back in those days (long before computer games) Scalextric and a good imagination allowed us and countless other children to play out our motorsport dreams.

Hey Bro, it was my Porsche.

Hey Bro, it was my Porsche.

Scalextric - then and now

I first saw Scalextric in our local department store just before. Christmas 1959 or '60. It sparked a life long passion for motor racing both full size and miniature.

Some years ago I discovered a local club - East Devon Slot Racing Club (www.edsrc.co.uk) who recreate classic and contemporary motor races every Friday evening. I also combine an annual trip to see the Mille Miliga with a visit to Verona Slot.

A certain Ross Brawn designed, built and raced slot cars and trust the Italians to take a hobby to a higher level. Slot.it and NSR produce incredibly detailed high performance slot cars that are virtually race prepared out of the box.

All the excitement and adrenaline of real motor racing, the same need for preparation and set up but on a smaller scale. 60 years on I remains addicted.

Look up your local club, set up one of your own or visit East Devon Slot Racing Club if you can, it really is a hooby best shared with fellow enthusiasts.