BACK TO ALL NEWS
Currently reading: Overheard in London: Autocar listens in to Formula E's UK return
UP NEXT
First drive: 2022 BMW XM prototype

Inside London’s Excel exhibition centre, fireworks are going off and there are cheers of joy as Alex Lynn and Mahindra Racing celebrate an unlikely Formula E race victory. But just a few feet away, the atmosphere inside the DS Techeetah garage is far more subdued.

Eventually the silence is broken by the voice of driver Jean-Éric Vergne on the car-to-pit radio. “This race was a pure joke,” he says. “I’m ashamed to see this type of racing. I’m in shock, honestly.” A few moments later, Vergne (known as Jev) pulls his battle-scarred single-seater into the pits and clambers out, making a circling cuckoo gesture with his finger. It’s a stark contrast to the buoyant, hopeful mood in the same pit a little over five hours earlier.

Autocar was given access to the DS garage for Sunday’s event, including the chance to listen in to Vergne’s radio communications. Initially hopes were high of making up for a difficult outing in Saturday’s first race. Mixed conditions during Formula E’s controversial qualifying format – in which the top drivers in the championship run in the first of four short sessions, when track conditions are typically at their worst – left Vergne 23rd on the grid, with team-mate António Félix da Costa a little way ahead in 17th.

Félix da Costa climbed to eighth in the race, with Vergne 14th, which became 12th after the two Nissan e-Dams machines were disqualified. The silver lining was that DS Techeetah maintained its lead in the Formula E teams’ points table. 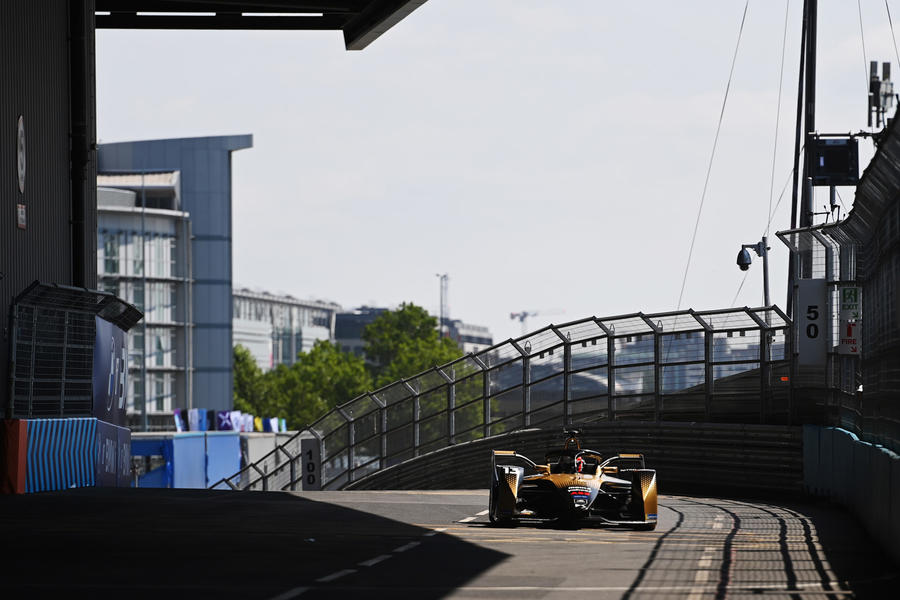 With rain having messed up Saturday’s qualifying, the team is nervous of a repeat on Sunday. Félix da Costa is slowest in his qualifying group, with Vergne next up. After one camera shot shows what could be drops of rain, Vergne’s engineer asks: “Are you sure you want to go first?”

“I don’t know what’s going on outside,” replies Vergne, highlighting the challenge of having the pits inside a darkened exhibition centre. Vergne is the second car to leave the pits, and on his warmup lap, the team give him various instructions: “Really work the tyres, especially the fronts. Go to mode five if the track looks good.”

Such instructions are the reality of pit-to-car communication: the outbursts picked up by TV commentary, such as Vergne’s post-race missive, are rare. Most of the communication is a short, professional transfer of information.

Once Vergne is on track, the team can’t control the car, so he has to pick the settings via controls on his steering wheel. There are two dials, each with 10 settings, six buttons (including a Mario Kartlike gold star to enable the Attack Mode boost) and six paddles for various regeneration options.

During his flying lap, Vergne is given both his split times and those of rivals – and they reveal that Jev doesn’t have the pace. As he tours back to the pits, his engineer offers some early feedback: “You lost a lot of time at the double hairpin.”

“The car just wouldn’t turn in there,” replies Jev, apparently genuinely bewildered. “I don’t understand. How can we go from an oversteering car yesterday to an understeering car today?”

The issues are different but the result is the same: Vergne qualifies 23rd, one spot behind Félix da Costa. Given that DS Techeetah have won back-to-back team titles and a record number of Formula E wins, the result is below expectations – but not entirely unexpected. “Formula E is so tight that if anything goes wrong you end up very far back,” says DS Performance director Thomas Chevaucher. “We will not score a lot of points today but will try to limit the damage.” 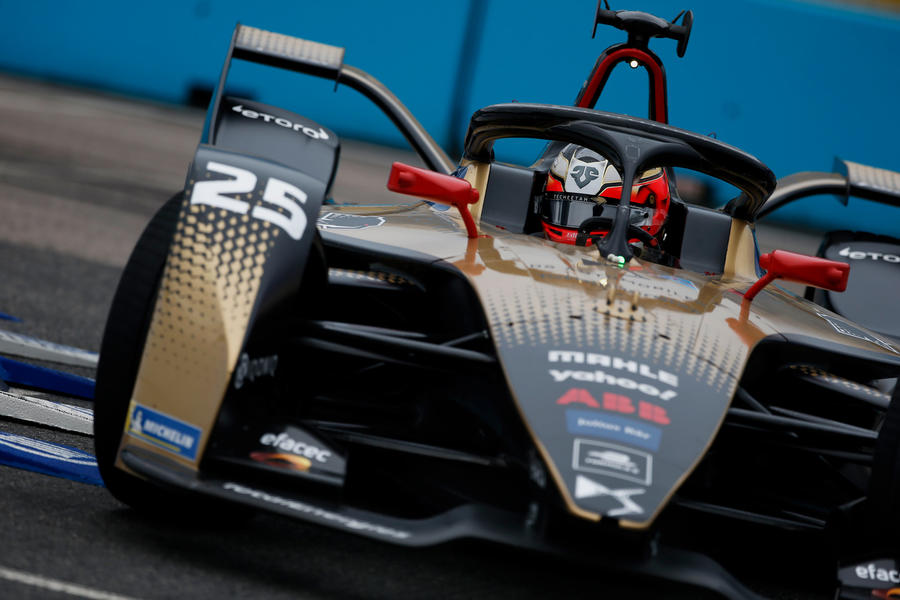 With just three hours between qualifying and the race and the cars under parc fermé restrictions for much of that time, there’s little room to improve the car. “We can do limited work to the mechanical set-up, but a lot of the improvement comes from software,” says Techeetah team boss Mark Preston. “Software is huge in Formula E.” That’s clear from the phalanx of computers located at the back of the garage, where the engineers, mechanics and drivers devote much of their focus. Even when the teams are allowed to work on the cars, it’s limited: only 17 mechanics, each denoted with a special armband, are allowed to touch the cars. Everything is overseen by an eagle-eyed scrutineer stationed at the back of the pits.

With Formula E’s short, bumpy street circuits, the set-up focus on a race weekend is as much about driver comfort as it is about chasing lap times. “Drivability is key,” adds Chevaucher. “It’s about giving confidence to the drivers. Formula E circuits are very bumpy and the grip is changing all the time.”

The activity builds to a flurry as the green flag appears and the cars head to the start. There’s a manic intensity as VIPs flood the grid, but once it clears, a quiet intensity settles in. The garage fills for the race: as well as the mechanics, scrutineer and your Autocar interloper, DS boss Béatrice Foucher and Stellantis motorsport chief Jean-Marc Finot squeeze in to watch the race. Even so, with the lack of engine noise, the pits are surreally quiet, despite 24 cars readying for battle metres away on the other side of the pit wall.

“Go Jev. Have a good race, mate.” As the lights go out, the distinctive, purposeful whirr of 24 Formula E motors pierces the silence - but the loudest noise is the crunching of carbonfibre as the cars bump and bang into each other and the track walls.

Félix da Costa and Verge emerge from the first-lap chaos in 18th and 20th, and both are soon instructed to use their Attack Mode boost. To do that, they have to drive through a special zone on the circuit, after which they’re rewarded with extra power for eight minutes.

“Make the most of it,” Jev is instructed. But any chance of progress is soon ended after contact between other cars leaves the track strewn with carbonfibre.

Sure enough, the electric Mini safety car is soon deployed, and Jev is told to maximise his efficiency. But Vergne also has instructions for the team: “Can you check the left-front? I hit something.” Vergne is instructed to pull across to the left when he next passes the pits so that a team member can sprint over to the wall and take a close look. It looks fine, so Vergne keeps going.

Shortly after the restart, the calm in the pits is disrupted by a huge bang from metres away. A car has struck the temporary pit wall right in front of the DS pit with enough force to shake it and make several people in the pit jump. Worse is to come when the TV camera reveals that it was Félix da Costa who made the impact, having been shoved into the wall by Porsche’s André Lotterer. 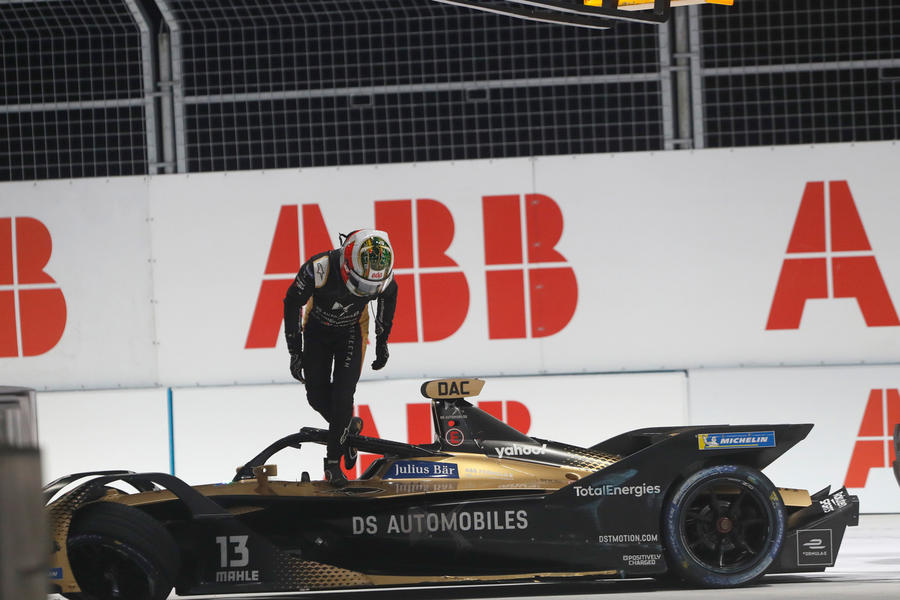 The DS pit erupts in indignation on seeing the move, but Vergne’s engineer remains an even-voiced oasis of calm: “Big risk of safety car with Félix da Costa in turn one.”

Vergne, though, had problems of his own. “What is [Edoardo] Mortara doing? He launched into me.” In the chaos, Jev has been hit as well, and for a second time he’s instructed to drive close to the wall for a damage assessment. He’s clearly still fuming. “He completely lunged into me.”

For Vergne’s mechanics, the recriminations can wait until later. “There’s still a lot of racing ahead, keep focused.”

At the same time, a disgruntled Félix da Costa arrives back in the DS pits, followed by a TV crew. The Portuguese driver heads to the back of the pits, where he sits down with his mechanics to watch a replay. Having shown admirable calm to that point, he lets rip with some suitable hand gestures to show his displeasure with the move, mostly for the benefit of the looming cameras.

On track, it’s increasingly clear that Vergne is unable to make much more progress. Still, with incidents everywhere there is hope. “With a possibility of penalties, we might still get 10th,” says his engineer.

Jev reports a bit of debris wedged in his car, which isn’t a surprise, given how much bodywork has been broken in the bruising race. More is to come when two cars crunch into each other at the double hairpin. “This is not racing any more,” says Vergne. “It’s madness.”

The late incidents lift Jev to an eventual finishing position of 12th – exactly where he finished Saturday’s race. “Sorry guys,” says Jev on the radio, shortly before breaking into his epic rant as he returns to the pits. 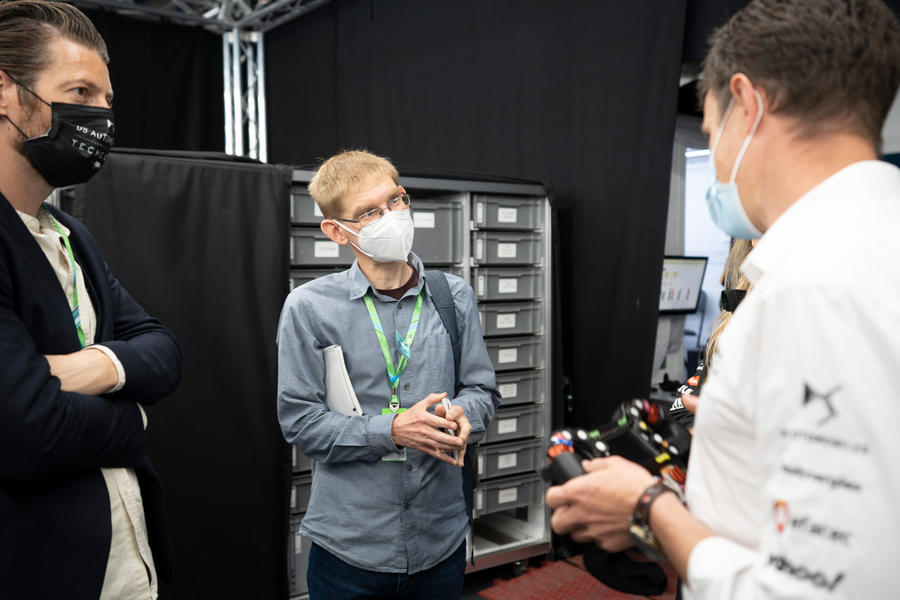 At the back of the pits, Foucher, Finot and senior team staff quietly watch the post-race theatrics, waiting for the appearance of the teams’ championship standings, which confirm that DS Techeetah has dropped from first to third in the points with just two races left.

Meanwhile, a mechanic studies Vergne’s damaged car, eventually spotting something unusual: a huge chunk of another car’s bodywork wedged in the suspension. He points at it and turns to the scrutineer. “That’s not part of our car,” he says with a laugh. It’s a brief moment of levity at the end of a long, hard day.

DS commits to Formula E until at least 2026

Short shelf life?  It's in its seventh season.  Now is a FIA World Championship.  Formula E may well be surpassed by a series more akin to what Formula 1 is now (longer distances, faster, open circuits) but that wouldn't be because of failure on the part of Formula E, but rather the success of the  foundation it has poured for potential future series.  I'm not particularly keen on Formula E, but I'm open-minded enough to see it is delivering in a way that was never thought possible seven or eight years ago.

Naff, sorry, but that's what I'd describe this E-sport, the venue had no wow factor, it was a series of access roads running through giant storage facilities, the track such as it was did offer in real terms, any for of racing, it was more barge, banzai chances, and the tactics and power up areas were like kids video games stuff, I honestly think this type of racing has a short shelf life, even with it green credentials.