BACK TO ALL NEWS
Currently reading: How to preserve the paint on a Ferrari F40
UP NEXT
Oxfordshire firm reveals 371bhp Porsche 964 911 restomod

How to preserve the paint on a Ferrari F40

Not many good things came out of the Vietnam War, but one was a way of protecting Bell ‘Huey’ rotor blades from shrapnel and operating debris with a protective wrap invented by 3M. Without that innovation, I would not be sharing space in a climate-controlled clean room with a Ferrari F40.

I’m at Jules Sturgess Automotive to investigate just how the dark art of protective wrapping is achieved. Please note this is ‘protective’, not the usual subtle camo wrappage favoured by Premier League halfwits. We are in the invisible paint protection business and directors Ruth Blomiley and Jules Sturgess are here to make sure that I fully understand what goes on. 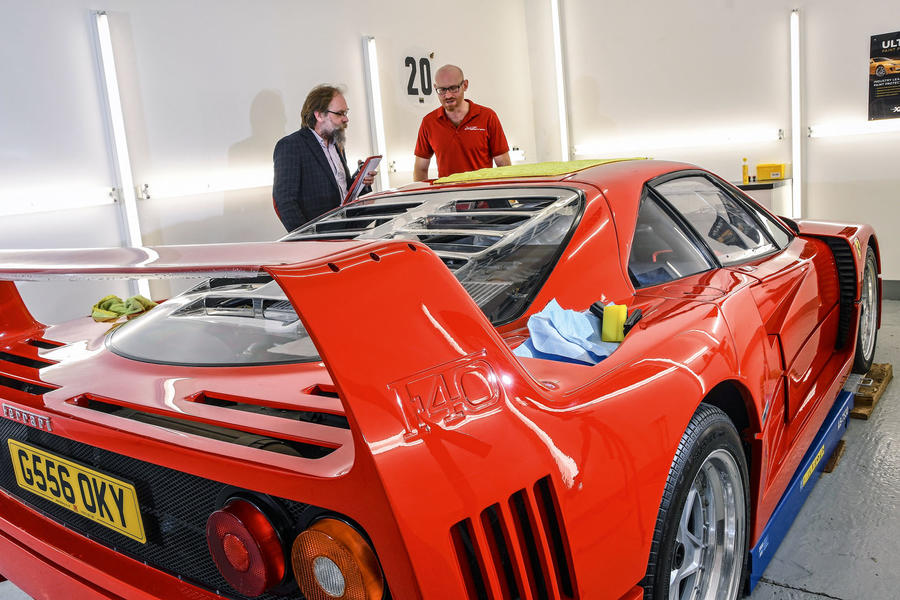 Obviously, I am rather transfixed by the F40, and Jules reckons that if this was any other car, he might be at the end of his tether by now. “The Ferrari F40 is a childhood dream. Just taking it off the transporter and driving it around the yard and into the booth, I couldn’t help but grin,” he says.

What you soon learn by looking closely at the multi-million-pound motor is just how average the finish was and some of the localised panel resprays have been over the years. It’s a 1989 car and has done only 15,000km (about 9300 miles) but at least it gets used and that’s why it is here: for protection.

So what exactly is the material? To my untrained eye, it is industrial-grade cling film. Ruth looks at me quizzically and then puts me right: “We use the market leader, Xpel Ultimate Plus. It comprises a tough polyurethane support layer that gives it the strength to withstand and absorb impacts from stones and other road debris. Not only that, it can even resist being pierced by things like keys with a self-healing top coat. This layer is made of gel, which will self-heal minor scratches, scuffs and swirl marks naturally over time.” 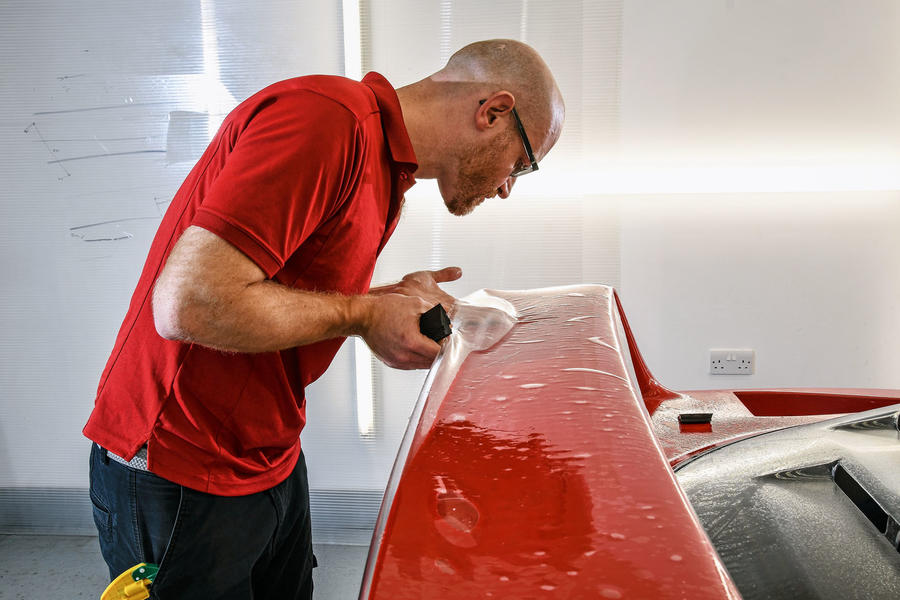 I like the sound of it being mindless-vandal-proof, and to prove the point, Jules grabs an offcut piece of Kevlar, scores it and then applies some heat with the steamer. Like magic, the score marks fade away. Good enough, then, for a Ferrari F40 and it is time to find out how Jules gets started.

“With a template, there is a software package and using a plotter and CNC system, which cuts the film into panel-sized parts,” Jules tells me. The trouble seems to be that the template for the F40 has been taken from side only and then simply reversed for the other. Luckily, Jules is a perfectionist, so he has been making a template of his own. He is well versed in this because many of the older cars they work on are not templated. 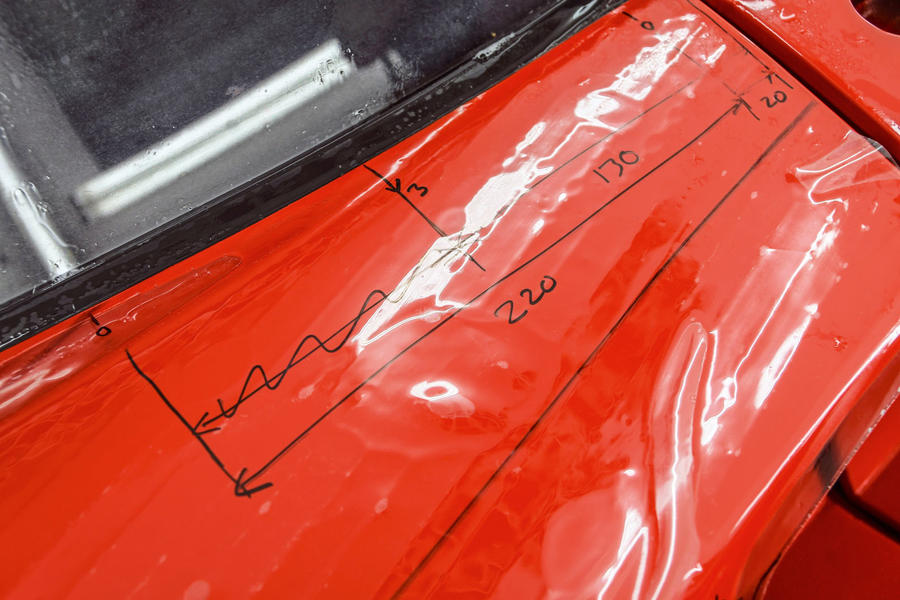 One of the restrictions he has to work with is that the material itself is a maximum of 1.5m wide. On large flat surfaces like the F40’s bonnet, a single piece is never going to work, so there will be joins. Cleverly, Jules uses the creases in the bonnet to hide the joins of three pieces of film and the material does the rest. It is incredibly hard to spot.

Probably the flattest, most photogenic surface to demonstrate how to apply the material is the spoiler. First, though, it needs a clean and Johnson’s Baby Shampoo is ideal, along with a good old-fashioned clay bar. Jules is using them to get the watermarks out of the paintwork. Next, the film is tacked on and then the steam, lots of steam, is used to stretch it. Jules is constantly sliding his hand back and forth. The heat transfer from his hand means he can’t afford to stay in one position. Teasing the film into the curves is highly skilled. Lesser wrappers may not go to the bother of a template and, horror of horrors, may even cut the film on the car. Jules visibly winces at the thought. 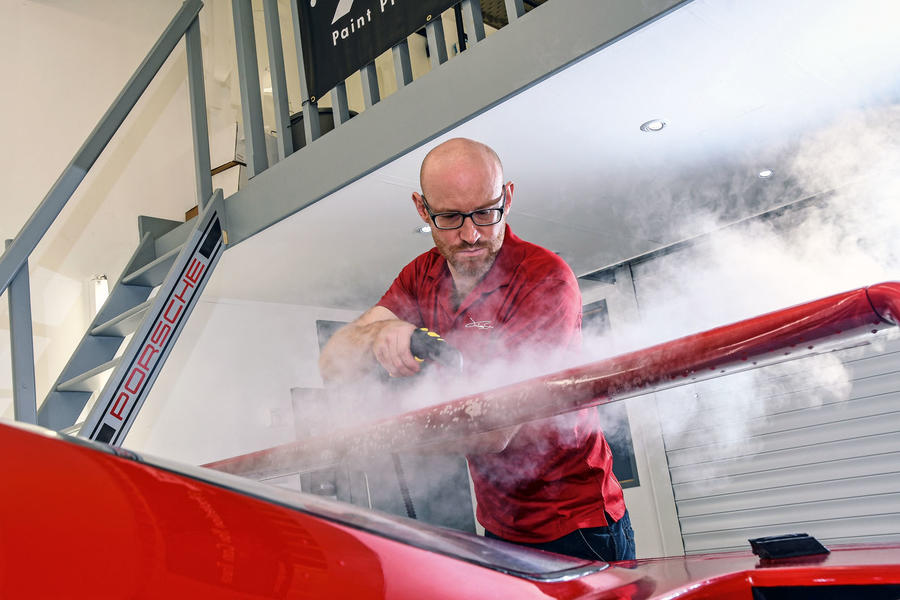 Back to the spoiler. An alcohol-based spray helps the film to set and it is possible to see the carbonfibre weave beneath the paint long before it has fully cured. The film does not go yellow in or inhibit UV light, so the paint under the film will react to UV light in exactly the same way the unprotected parts of the car do. (All paint slightly discolours and fades in direct sunlight over time.)

According to Ruth, there is no extra charge based on the marque. It is all about time. Usually, it takes a day to template and a week to wrap the body. Unless it is an F40 and you can more than double those timeframes. The bottom line is £1500 to do the front end and £4500 to £5000 for the full body wrap.

A Ferrari F40 with added ‘helicopter tape’: what a spectacular combination.

This article was originally published on 10 March 2019. We're revisiting some of Autocar's most popular features to provide engaging content in these challenging times.

The art of transforming cars with wrapping

Most extravagant optional extras you can buy​

I was keen to write some interesting comments... Alas.
Does anybody else experience difficulties signing in?
This happens all too often. It
doesn't recognise my log in details and I'm directed to my inbox and asked to create a new password etc. It's a lot of faff, after which I loose the will to live!
Anybody?
Any response would be much appreciated.
si73 9 April 2020

I was keen to write some interesting comments... Alas.
Does anybody else experience difficulties signing in?
This happens all too often. It
doesn't recognise my log in details and I'm directed to my inbox and asked to create a new password etc. It's a lot of faff, after which I loose the will to live!
Anybody?
Any response would be much appreciated.

Not had that issue, the system frequently prevents me from posting, saying I have an embedded link in my post, and I e only recently sussed out that to enable a reply with a quote I have to disable rich text, whatever that means, but it's underneath the comments box.

Regarding this film, it makes a lot of sense I reckon if you are using your car a lot, especially front end treatment for a track car, but the low mileage of this F40 seems to make it unnecessary. I am surprised it doesn't help prevent uv paint fade, as, especially, with an older red car, the body work can end up looking like a patchwork quilt, with the wrap on you are unable to polish the panels to even up the finish.

Firstly fellow posters, we're all intelligent enough to get our points over without insulting, swearing and not putting the topic first, yes, and I've sort of changed my opinion, if the finish goes a bit tatty after so long, then it's a waste of money, for the five grand I'd expect it to protect and be good as the first day it was applied.