BACK TO ALL NEWS
Currently reading: Command and control: How Transport for London is watching you
UP NEXT
Renault Scenic returns as radical EV with hydrogen range extender

Command and control: How Transport for London is watching you

London traffic control body's centre is a state-of-the-art facility with a world-class reputation. We find out how it manages the capital's roads
Open gallery
Close

If you drive in São Paulo, things may be about to get easier – or perhaps, depending on your point of view, more difficult. A delegation from the city’s transport department is visiting Transport for London’s network management control centre (NMCC) to see for themselves how the organisation, considered to be one of the best transport operators in the world, manages the capital’s 360 miles of roads.

Huddled behind a viewing window, the visitors peer at the centre’s huge wall-mounted screens that relay live traffic situations in high definition and watch as staff operating joystick controllers zoom onto incidents like a scene from The Capture, the BBC surveillance thriller.

“They’re especially interested in seeing how we’ve integrated all our previously separate control departments into one so we have a more efficient and linked-up approach to roads management,” Nick Owen, head of control centre operations, tells me. 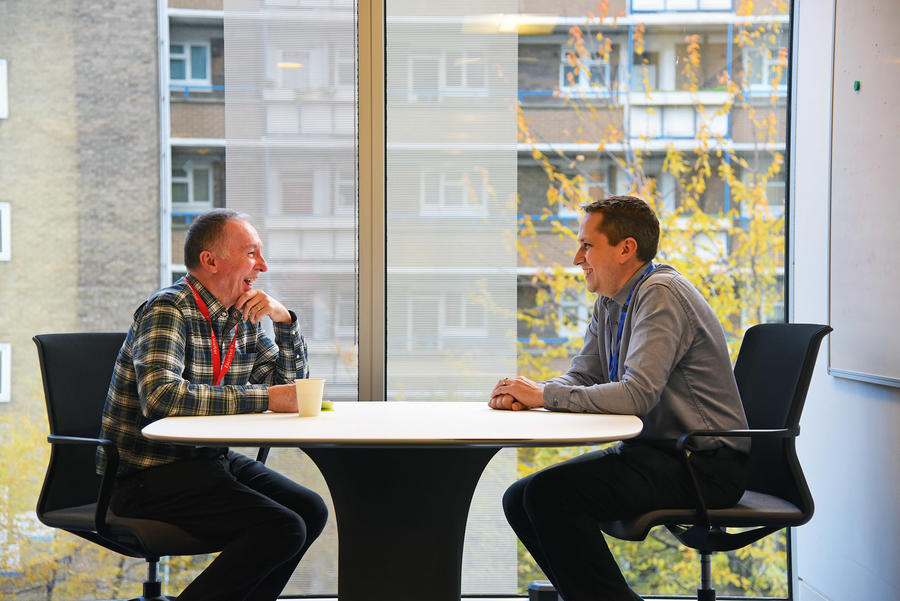 This change in how TfL works has been driven by London mayor Sadiq Khan’s transport strategy, which aims to eliminate all deaths and serious injuries from London’s streets by 2041, an ambition billed as part of the broader ‘Vision Zero’ movement.

My visit to NMCC coincides with work beginning on installing new 20mph speed limit signs, road markings and raised pedestrian crossings on five and a half miles of roads in the congestion zone, to go live in May. By 2024, many roads outside this zone will also be subject to a 10mph reduction. The fact that the average speed of cars in the capital is just 7mph would appear to make these reductions unnecessary – at least until you’re hit by a vehicle doing 30mph.

In any case, cars in London are living on borrowed time, since also by 2041 the transport strategy’s aim is for 80% of all journeys in the capital to be by public transport, bicycle or on foot. Currently the figure is at 63%.

Cameras that can zoom in on them, speed limits that are getting lower and plans to reduce their number – it sounds like London has it in for car drivers. Except that, to hear him talk, Owen might actually be their friend. 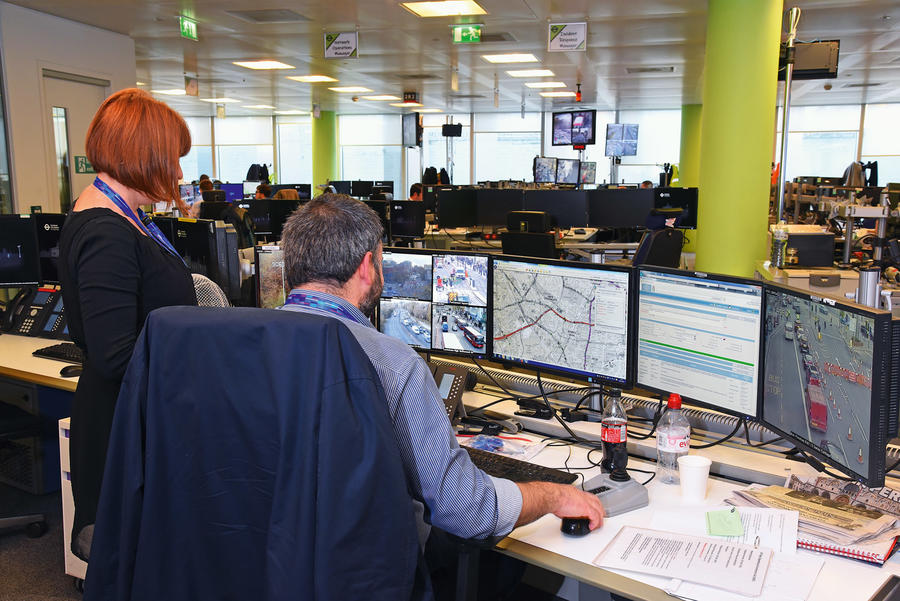 To prove it, he walks me round to the area of the centre dedicated to keeping London’s 13 tunnels and underpasses open and moving. A bank of large, wall-mounted screens displays live images of cars and trucks streaming through the tunnels. Watching the images are a couple of operators, two of the control centre’s 170 rostered staff who provide round-the-clock cover, 365 days a year. They’re watching not only for incidents but for anything that might cause one, such as a pothole or loose manhole cover.

“Just recently, around midday after rush hour, we closed the Blackwall tunnel to repair a hole,” says Owen. “From closing to reopening it took just two and a half minutes and we avoided the inevitable accident and hold-up later in the day.”

We move over to the Urban Traffic Control team whose focus is incident response. Among the general images of traffic, such as you might see on a breakfast TV travel update, are close-ups of live incidents with operators zooming in and out for a closer look or to assess the impact on neighbouring streets.

One incident is happening right before our eyes. It’s at a major junction at Swiss Cottage. The traffic lights have failed and two lanes have been closed off. The recent merging of TfL’s once separate control functions means that a section of the Metropolitan Police now falls under NMCC’s control (TfL funds 2000 Met officers) and two officers have been deployed to direct the traffic.

At many junctions TfL uses monitoring tools, including magnetic coils buried in the road, to record traffic volumes and optimise traffic light sequencing (the centre’s operators can also control 80% of the capital’s 6300 sets of lights remotely). Elsewhere, it’s trialling radar at major pedestrian crossing points to gauge the size of crowds and automatically trigger and extend ‘green man’ lights, while on a section of the M2 and A2 it’s testing traffic light prediction software in cars.

“The point of all this new tech is to enable earlier incident intervention and more effective management of our roads,” says Owen. “The fact is, we have finite road space and demand for it exceeds supply. For example, while we’re seeing 13,500 fewer older polluting vehicles entering the congestion zone, the number of all vehicle types circulating within it has increased, maintaining pressure on road space.

“During the day, cyclists and pedestrians are the most efficient use of that space and we prioritise them. But at night, there’s less need to, which is why drivers find it easier to move around.”

Technology, including the 5500 CCTV cameras to which it has access, helps TfL manage congestion more effectively, but Owen’s most important sensors are, and will remain, the capital’s bus drivers.

“They’re especially valuable because they’re the only road users who must follow a schedule,” explains Owen. “The second a driver’s journey is interrupted by an incident – for example, a crash or road works – they tell us.”

He indicates a screen showing bus routes, some of them in red where services are delayed.

“Red routes spell trouble but show us where to look and what needs managing,” says Owen.

By now, the experts from São Paulo have seen enough and are shuffling out of the viewing room, heads filled with new ways to manage their city’s rising traffic levels.

I leave too, but on the street outside the control centre I rashly decide that since the traffic lights are on red, I’ll ignore the red man on the pedestrian crossing and dash to the other side anyway. Just as I approach the far kerb, the lights change and a black cab, whose driver has clearly taken umbrage at my decision, accelerates hard, straight at me.

It’s a reminder that in the hard-fought space that is London’s roads, one wrong decision can mean the difference between going home or going to hospital. At least Nick Owen and his team are watching. 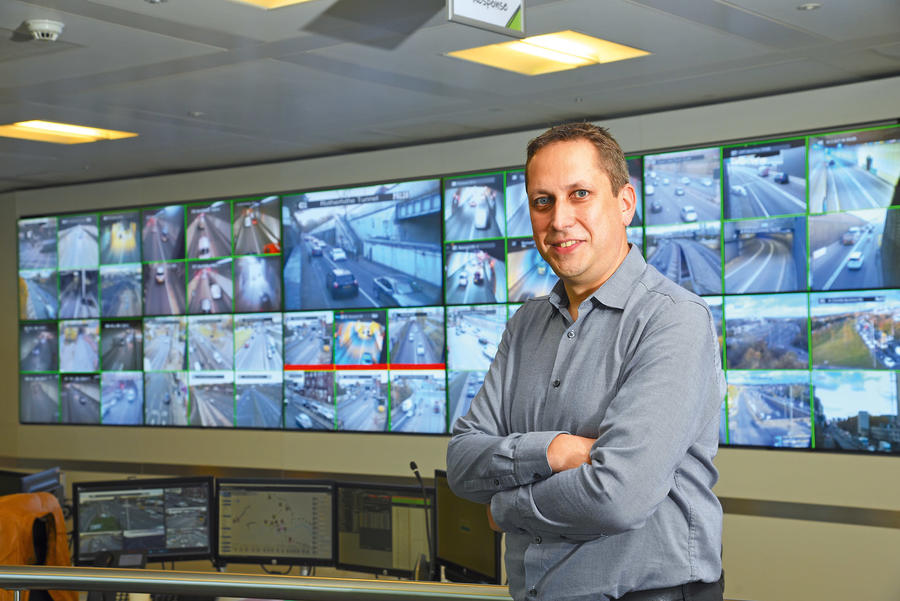 In a night's work

One way TfL keeps traffic moving is by improving the way it maintains the roads. For example, by using traditional methods of road closures, maintenance work on the A2 between Blackwall Lane and Dartford Heath has taken up to 58 nights in previous years, but by fully closing the road each night, the most recent work carried out this year was done in 20.

How Autocar writers would fix Britain's roads and transport

TFL is a self serving orgaznization dedicated to getting londoners to use London Transport instead of their own vehicles, that's why they were so aggresive to UBER cabs but turn a blind eye to the "financial liberties taken by black taxi cabs" over decades and no price controls or talk of making the "black taxis" any easier to use an alternative due to the extortionate rates they charge for example. What we have is pictures of smugness within the TFL building.

Can't be easy keeping it running smoothly,and it's not going to get any easier in the future.