BACK TO ALL NEWS
Currently reading: From Aston with love: Driving James Bond's DB5
UP NEXT
Prodrive P25 is uprated Subaru Impreza 22B with 400bhp

The latest Bond film stars not one but three different Aston Martins. We head to Silverstone to get behind the wheel of what is arguably the most memorable 007 Aston of them all
Open gallery
Close

Even by Silverstone’s high standards of specialness, this Valentine’s Day was pretty remarkable.

Out on the main circuit the new Mercedes-AMG Formula 1 car was making its moving debut, the W11 snarling and stuttering its way around the track as Valtteri Bottas and Lewis Hamilton put it through its paces, a smattering of VIPs standing trackside and with drones buzzing overhead to capture footage. Ordinarily I’d have been looking for a vantage point, but the cars on the junior Stowe Circuit – now Aston Martin’s high-performance test track – proved to be even more compelling.

To celebrate its involvement in the forthcoming James Bond film No Time To Die, Aston Martin had assembled a group of cars connected with the film. That meant a DBS Superleggera, a 1980s V8 pretty much identical to the one featured in The Living Daylights and which has a modest cameo in the new film, and what appear to be four near-identical DB5s in the silver birch colour made famous by the one Sean Connery first drove in Goldfinger.

That turns out to be half right. Two of the DB5s are very much the genuine article. One is an immaculate 1964 car wearing the BMT 216A registration of the original film car, the other a similar-vintage model that’s being used as a test bed for the gadgets in the forthcoming Goldfinger continuation version – and yes, it has replica Browning machine guns in its indicators. The other pair look identical but are pretty much entirely different, being two of the eight near-perfect replicas that Aston Martin built for stunt work. 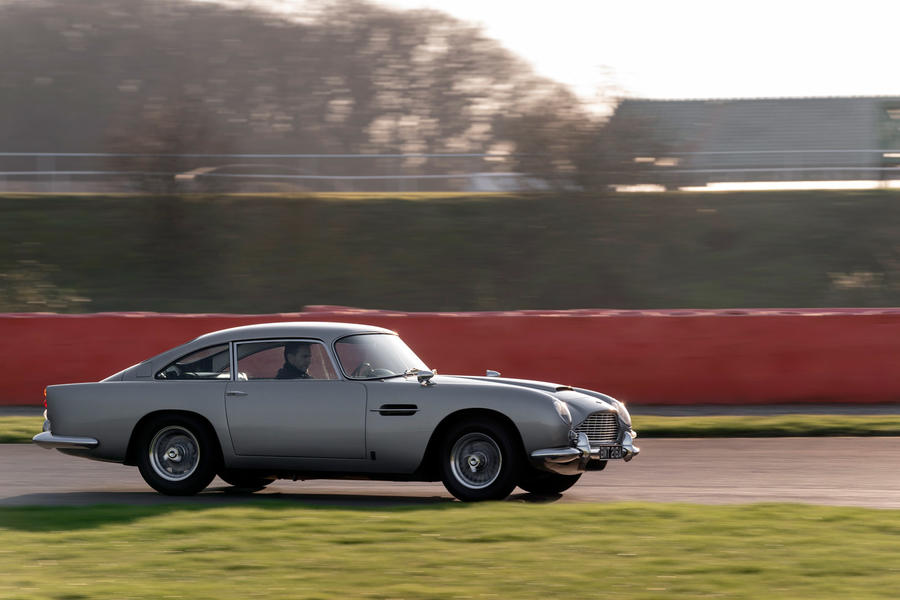 I was lucky enough to get a chance to visit the set in Matera, Italy last year to see one of the set pieces of No Time To Die being filmed, but today promises to be even more special, with the chance to drive both the original DB5 and its high-tech doppelgänger back to back. And I’m not even wearing a dinner jacket.

While there are external differences between the real DB5 and the deepfake, you’ve got to be trying hard to spot them. The replicas use carbonfibre bodywork over what is essentially a steel spaceframe, the mouldings created from the scans of the original DB5 that were also used for the Goldfinger continuation models. Look closely and you’ll see that the replica car’s radiator grille comes fractionally further forwards, the silver finishing on the front wing vents is shorter, the headlight bezels are more flush and the windscreens don’t quite fit, with gaps around the beading. More obviously, the new cars also have socking great roll-cages in them, for fairly obvious reasons, given the demands of filming. But they are close enough to be barely distinguishable from 10 feet away, let alone when moving at speed. One of the stunt cars is also wearing plastic wrap to approximate the damage it’s meant to have picked up during the chase sequence.

Interiors are much more different. The original DB5 features an abundance of chrome-bezeled instruments, what now seems like an impossibly dainty gearlever and a seating position that forces the driver to adjust to fit around the huge wooden-rimmed steering wheel, rather than the other way around.

The driving experience is equally special but equally dated. The straight six engine feels a little anaemic at low revs but turns raspy when pushed and delivers impressively strong urge. But the hugely heavy unassisted low-geared steering, limited front-end grip and copious body roll limit enthusiasm for pushing hard – as does the seven-figure price tag. The idea of hustling one in a high-speed stunt sequence is plainly ridiculous. 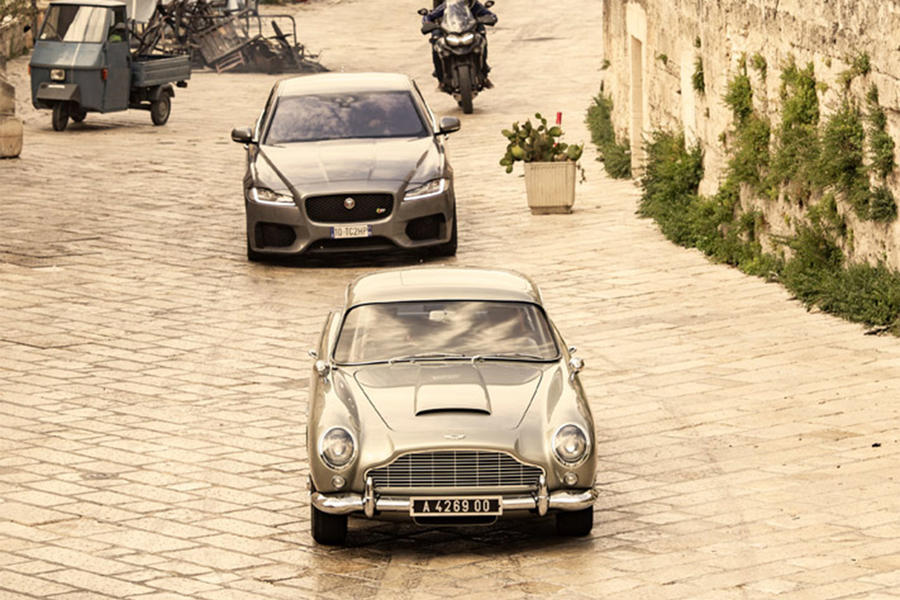 Not so the replica, which has been built for a life of pure abuse. The dashboard has holes instead of instruments, with nothing more than a speedo and rev counter. The wooden wheel is similar but mounted far farther out to be positioned for the motorsport-grade carbonfibre bucket seat. There’s an AP Racing pedal box, a huge hydraulic handbrake – which I’m under strict instruction not to use – and a gearlever whose familiar shape rather negates Aston’s refusal to say where the donated engine and gearbox comes from. The official line is that it’s a naturally aspirated straight six making around 340bhp, but let’s just say they didn’t go to Q Branch, more M division.

The stunt car is also an absolute beast, with a driving experience completely at odds with the staid styling. With a mass of just 1000kg, it has more than twice the power-to-weight ratio of the original DB5, plus a much stiffer structure and rallycross-derived suspension. The hydraulically assisted steering feels spot-on, yielding instant responses without any of the slop of the original car. There’s a surprising abundance of grip considering the narrowness of the tyres – behind the period pattern is a racing compound – and the replica’s cornering stance is surprisingly neutral considering how slidey it looks in the film’s trailers.

Not that it’s hard to make it go sideways, with the engine having more than enough torque to engender plentiful oversteer and the steering staying utterly faithful as the car starts to slide. But my modest efforts are nothing compared to those of lead stunt driver Mark Higgins, who is on hand at Silverstone to show what the car is capable of and treats me to a passenger ride that mostly involves looking through side windows. 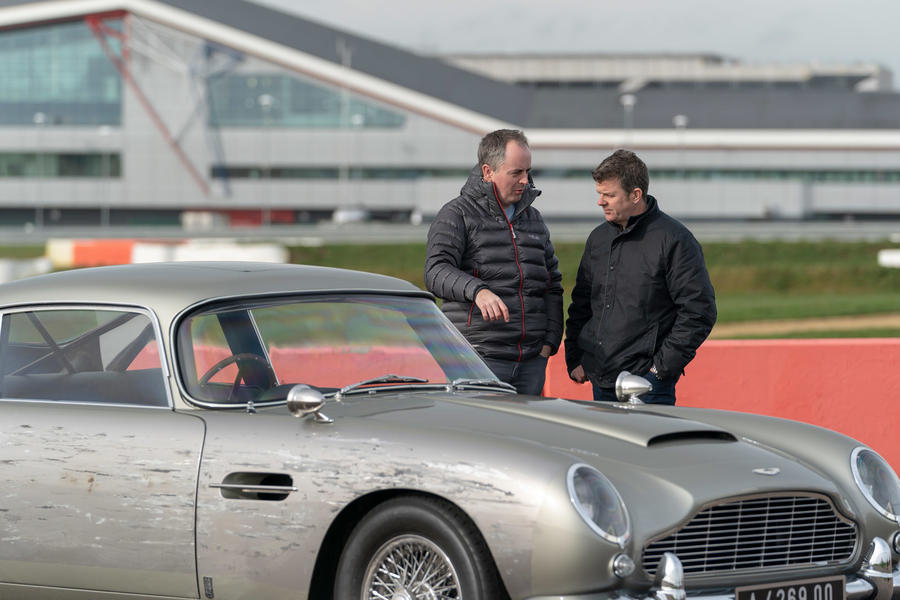 It’s no exaggeration to say that James Bond is one of the UK’s biggest cultural exports; collectively, the films have grossed nearly £5.5 billion worldwide, or more than £9bn when adjusted for inflation. Getting a DB5 in Goldfinger – something Aston was then reluctant to do – is now regarded as one of the most successful examples of product placement of all time.

For No Time To Die, Aston has built and supported the use of the stunt cars but isn’t paying Eon Productions anything for featuring either the DB5 or newer models. There’s no official word on how much this cost, but a senior company insider says it’s “unbelievably little” for the publicity it will generate. Long may the association continue.

On set in Italy

The DB5’s role in No Time To Die was mostly shot in Matera, Italy, the spectacular rock-hewn city being the backdrop for an extended chase sequence involving the Aston and a pursuing pack of bad guys driving cars as diverse as a 1990s Maserati Quattroporte and an early-2000s Lancia Thesis. Former British rally champion Mark Higgins is the lead stunt driver, having worked on three previous James Bond films and today one of the acknowledged experts of action-packed precision driving.

Not that he had to do any on the day I visited the set, most of which featured the DB5’s bulletproofing being tested after the villains have him cornered. Despite this, Higgins was still ready to go at all times – and wearing carefully applied dots on his face to make it easier to digitally morph Daniel Craig’s more bankable features onto his in close-ups. 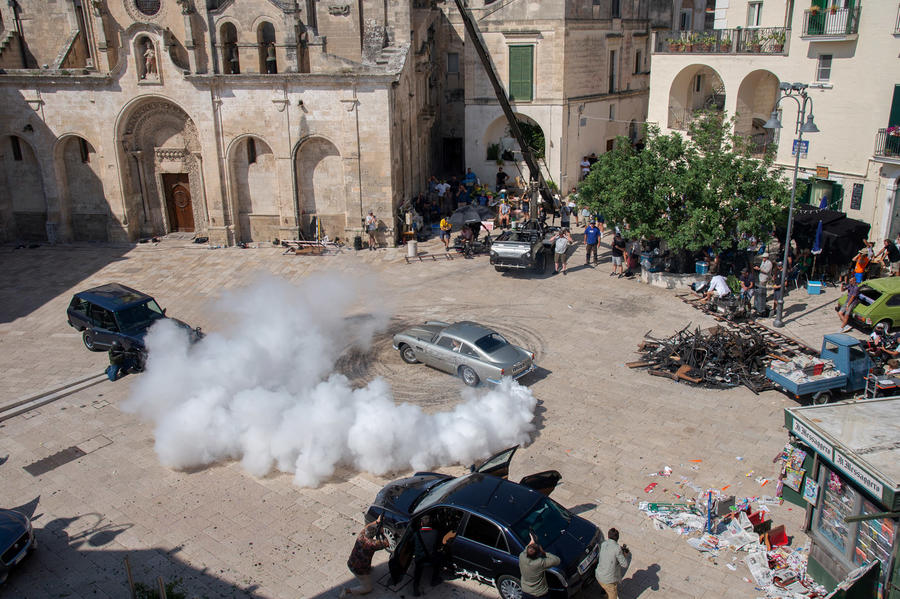 Matera’s slippery stone streets proved to be a serious challenge, with Higgins admitting he was “sceptical we could make it work” when he first encountered them. The solution proved to be fizzy cola: about £50,000 worth of the full-sugar version was sprayed onto the surfaces to increase grip by about 50%. “Rear grip is never an issue, because you want it to look exciting,” Higgins said. “But without grip you don’t have speed, and without speed you can’t do anything.”

The key to movie stunt driving, Higgins reckons, is not only repeatability but also not making things look too neat and tidy: “The problem is that what they are looking for and what I think is cool can be very different. So you can have a lovely drift scene and it can feel great in the car, but it doesn’t look real – you have to make it look scrappy, not fluid. As a driver, it can be frustrating, but I’m here to do what I’m told.”

Higgins admits the DB5’s big finale was particularly entertaining to shoot, and indeed to shoot – spoiler alert approaching – with the car having a substantial upgrade from the Connery-era machine guns to twin multi-barrel miniguns that deploy from within its headlights, then wiping out the surrounding bad guys with a spectacular full-power donut.

“I read that in the script and thought ‘oh yes, that’s very Bond’,” Higgins remembers.

How to buy a James Bond car on the cheap

The DB5 is arguably the most

The DB5 is arguably the most memorable? What moron would have that argument?

Having said that, I entirely agree with voyager12. Aston makes far too much of an association with a completely ridiculous and totally fictitious character in the series of films.

Is there nothing else for them to talk about?

the whole association with 007. Grow up!

That was about 30-odd years ago and I'm glad that I did. But even then it felt like an old truck, heavy, ponderous and vague steering, iffy brakes, oily leathery old car smell etc. I think most cars from that era are best admired from a distance. For me once was enough; actually owning, while maybe financially rewarding, one would be a pain and not very satisfying from a driving perspective.