BACK TO ALL NEWS
Currently reading: From the archive: A royal Rolls-Royce
UP NEXT
2022 Mercedes-Benz EQE: images preview EV's radical design

From the archive: A royal Rolls-Royce

In 1950, we detailed the new Phantom IV, which had been designed for Princess Elizabeth and the Duke of Edinburgh
Share
Open gallery
Close
Share story

Two-and-a-half years after their wedding, Princess Elizabeth and Prince Philip, the Duke of Edinburgh, took delivery of the very first Rolls-Royce Phantom IV.

Autocar reported details of the car on 7 July 1950, saying that while Rolls-Royce had longstanding relationships with high society, this was "the first time that a completely new model has been evolved specially for members of the British Royal House".

The all-new chassis, codenamed 4AF2, had been delivered to the chosen coachbuilder, HJ Mulliner, the previous July. Rolls-Royce had apparently planned this to be a one-off, it having been ordered at the personal request of the Duke, but a total of eighteen would go on to be built through to 1958, all going to heads of state, including Generalissimo Francisco Franco of Spain and King Faisal II of Iraq, apart from one that underpinned a truck used at the Crewe factory.

"The lines and proportions of the car are so well balanced," we said, "that its great size is not immediately apparent, but with a wheelbase of 12ft 1in, an overall length of almost 19ft and a height of over 6ft, it dwarfs most other cars on the road". That is indeed huge even by modern standards - even today's extended-wheelbase Phantom VIII is only around 8in longer, and you must remember that your average Morris Minor in 1950 stretched just 12ft 4in. 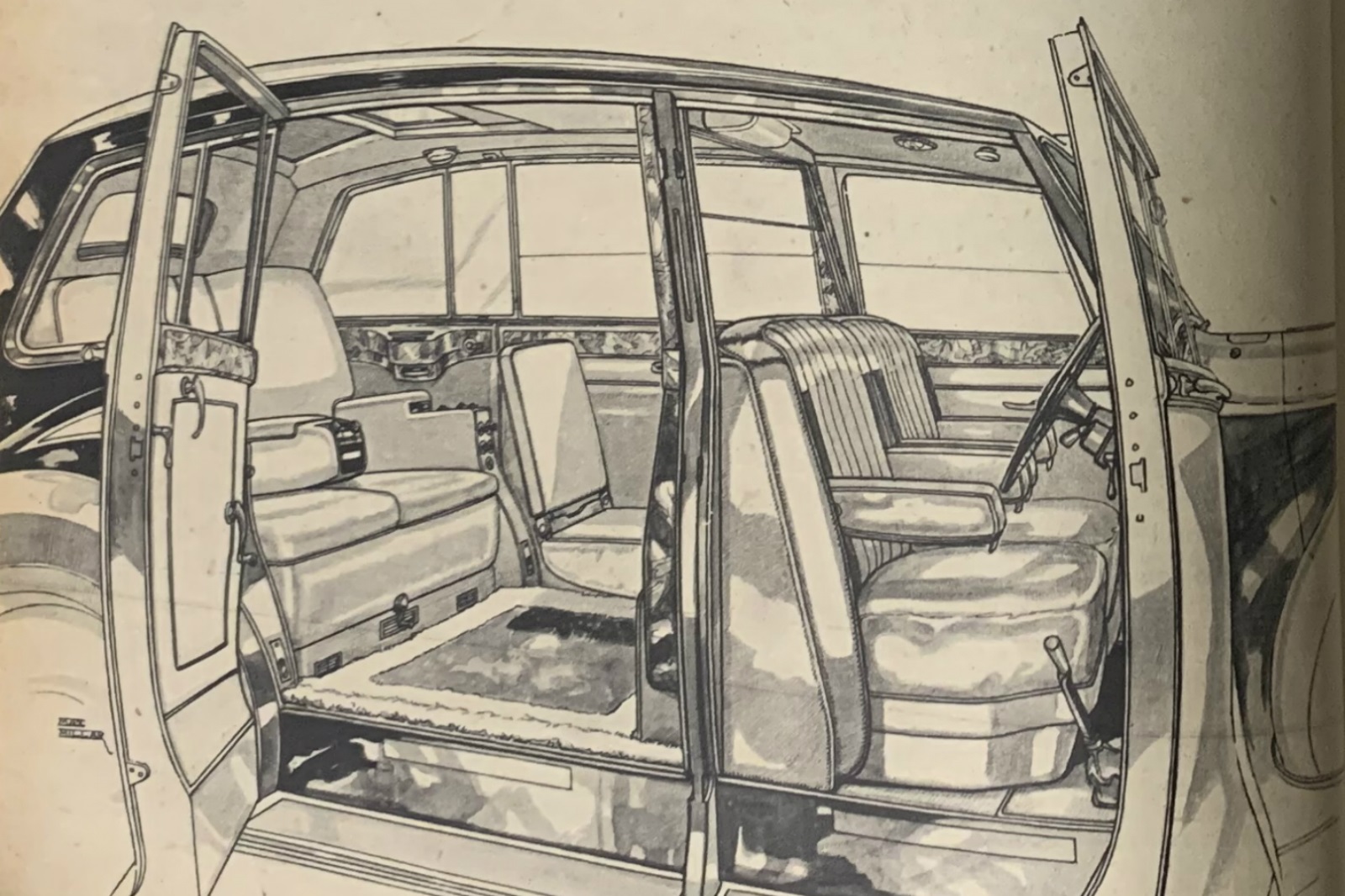 "The rear compartment provides drawing room comfort for two people and has two comfortable occasional seats which fold away into the division when not required," we continued. Ease of entry was aided by coach doors opening 3ft 2in wide and a very shallow roof panel.

"The interior is rendered very light by the generous glass areas, supplemented by a transparent panel in the roof, which can be obscured by a motor-driven blind. At night, the interior can be brightly illuminated by a concealed strip light, besides which there are foor roof lamps in the normal pattern.

"The general style of finish, in keeping with the desires of the owners, is very simple, with grey cloth upholstery, a grey curled mohair rug and figured walnut cappings and panel work on the division with banded edges.

"In front, there are two very larger and comfortable armchairs upholstered in green leather. The driving seat is separately adjustable and a sufficient sliding range has been provided to enable the car to be driven comfortably by a tall driver such as the Duke of Edinburgh himself. Each of the front seats is provided with two armrests which fold away into the backrest when not required.

"Heating and ventilation arrangements are very thorough. Two air intakes, one on each side of the radiator, supply fresh air to ducts which feed front and rear compartments, and there are three heaters, drawing warm water from the engine cylinder head. The rear quaterlights incorporate swivelling ventilation panes with a large arc of movement."

Of course, the new Phantom also featured all the latest electronic gadgetry of the time: "Control buttons for the heating system, division, electric window winders and ashtrays are located in the outer two armrests in the rear compartment. 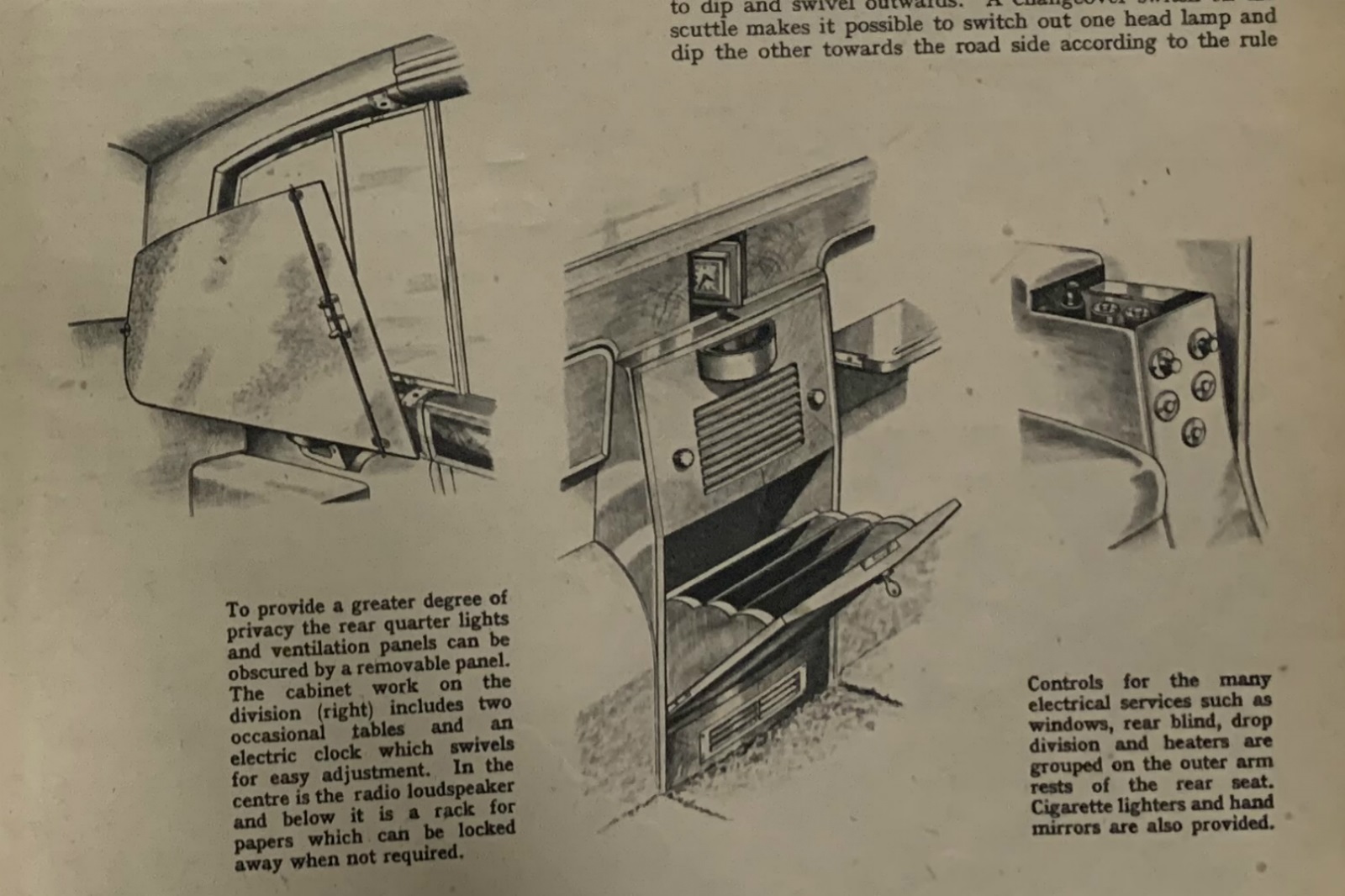 "The centre armrest has built into it the controls for the radio set and also includes a glovebox. The radio itself is concealed in the luggage compartment and operates two loudspeakers, one in the cabinet work and the division and another in the driving comparment, which is provided with a separate volume control." God forbid Her Royal Highness miss the BBC Light Programme, after all. Naturally, cigarette lighters and hand mirrors were also provided.

On the mechanical side, we described how the underpinnings were the latest in a line "stretching back to the immortal Silver Ghost [of 1906-26] and reaffirming the position of the Rolls-Royce firm as makers of a car which is not only the finest in the world mechanically, but also one which for size, power and performance can justly be regarded as the most magnificient in the world."

Isn't it wonderful to read prose so unabashedly confident of something British? That sentence written today would generally be considered laughable, to the great detriment of the little that remains of national spirit and pride.

Anyhow, I digress; back seven interluding decades now to the wonderfully analogue mechanical doings of the day. "A range of four, six and eight-cylinder engines with common valve, piston and connecting rod assemblies was designed to the order of the Ministry of Supply some time ago," we said, "and major components from this range were used in evolving an eight-cylinder car engine which has run for some time in an experimental Bentley chassis. This same engine has provided the basis for the power unit used in the new Rolls-Royce chassis. 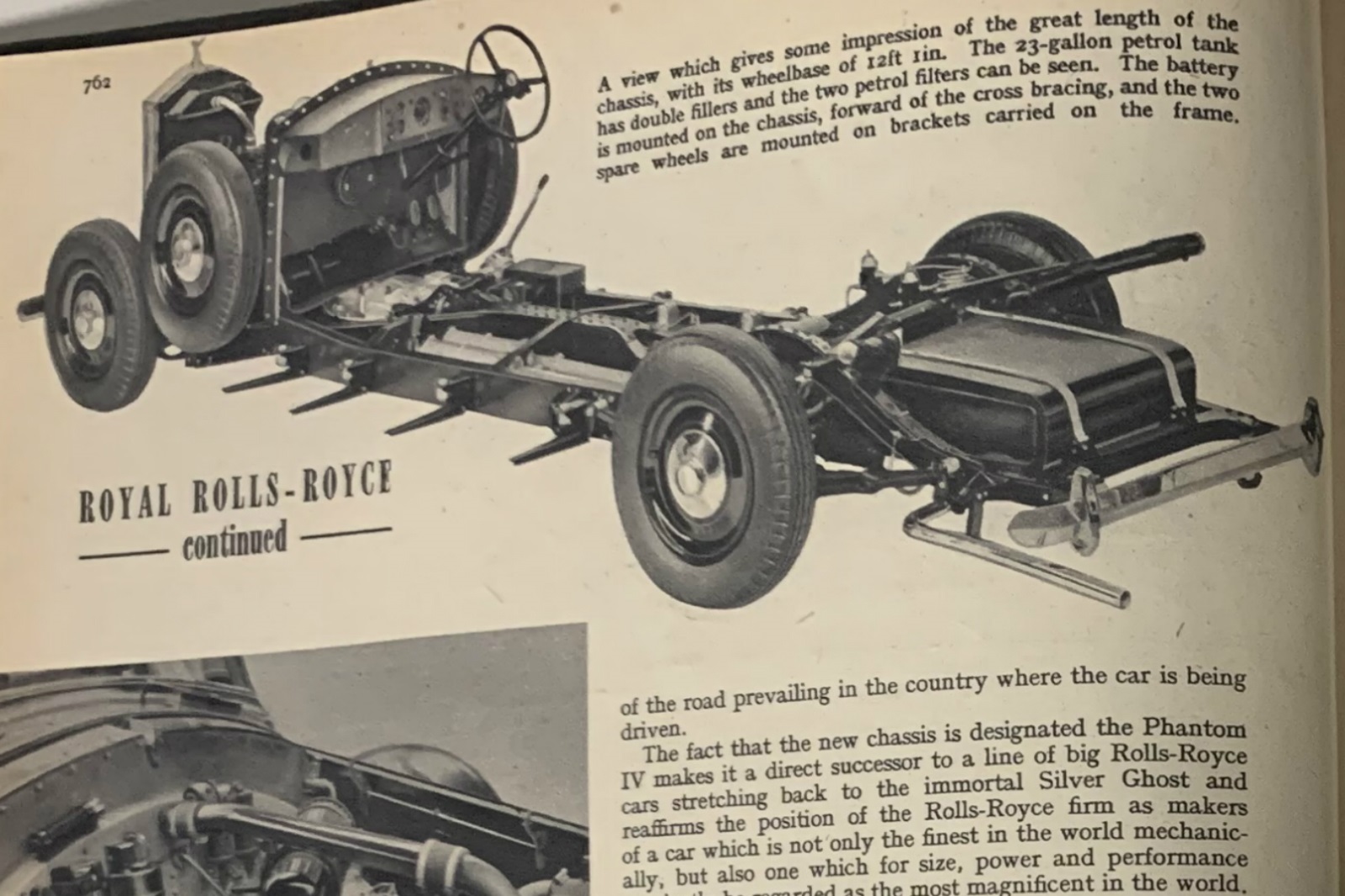 "Like those of the other Rolls-Royce and Bentley cars now in production, it has overhead inlet valves and side exhaust valves and uses a cylinder head of aluminium alloy RR50 with inserted valve seats. The crankshaft is of chrome molybdenum steel and runs in nine main bearings. The crank pins are nitrided and the bearings have thin shells of copper-lead-indium. The crankcase is in cast iron and at the top of each cylinder is a short hard line of chrome-iron in the area where cylinder wear is normally concentrated. Pistons are in RR53 aluminium alloy and are tin-plated, with one compression ring, one L-section scraper and a slotted oil control ring.

"There is a helical gear oil pump in the crankcase with feed intake and a bypass filter on the outside of the cylinder block. The external pressure relief valve controls the high-pressure feed to main and big-end bearings, camshaft bearings and skew gear drive to oil pump and distributor, with a low-pressure feed to valve gear and timing gears.

"The cooling system incorporates radiator shutters controlled by a thermostat in the header tank and there is an auxiliary thermostat in the cylinder head which ensures rapid warming up from cold and provides the earliest possible supply of warm water to the interior heating system." 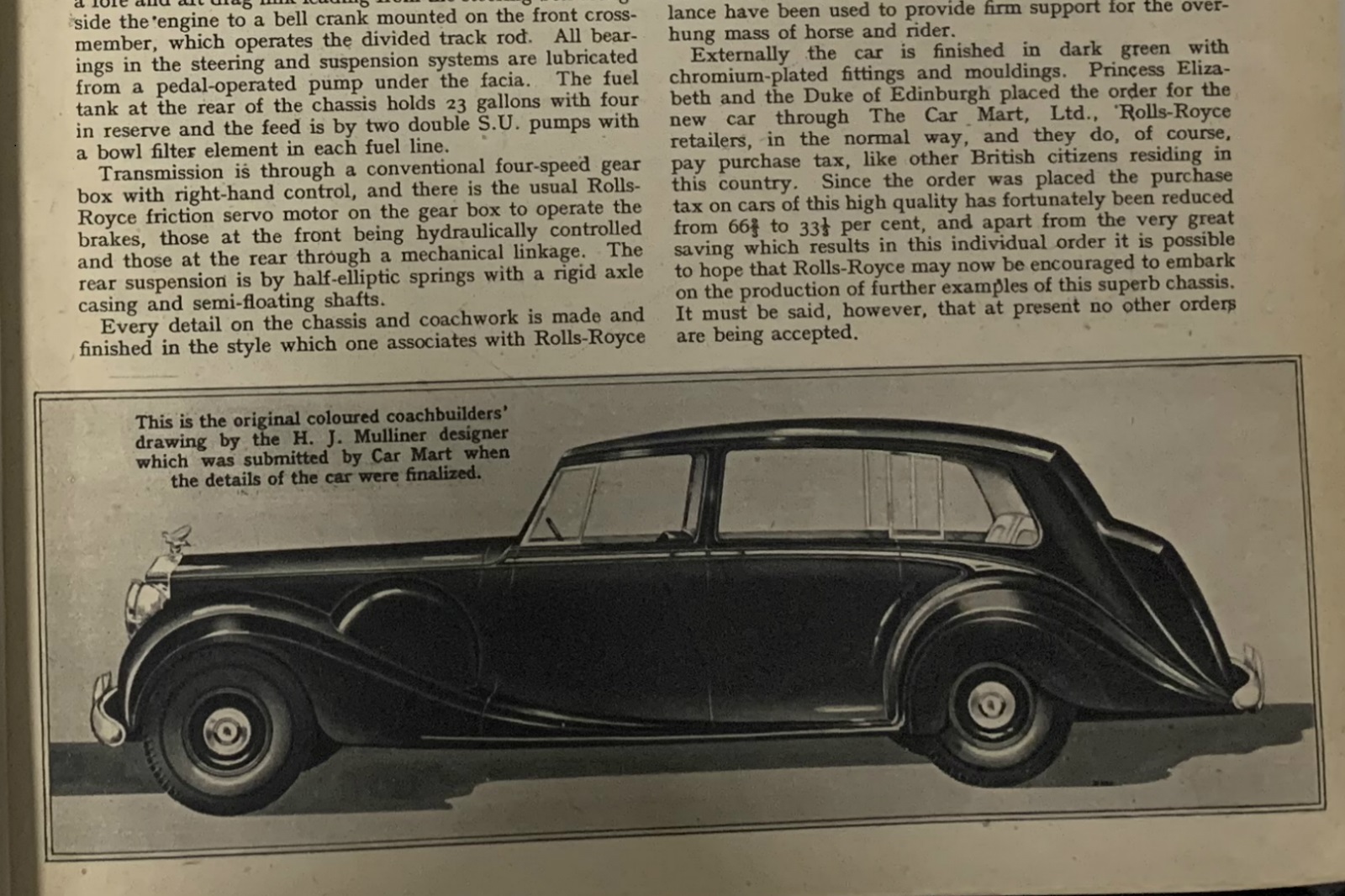 The chassis itself generally followed the 1946-58 Silver Wraith, with suspension of coil springs and wishbones, plus an anti-roll bar, at the front and a rigid axle with half-eliptic springs at the rear. Each end also featured double-acting hydraulic dampers. The steering, meanwhile, was by cam and roller, with a fore-and-aft drag link leading to a bell crank that operated the divided track rod.

"Transmission is through a conventional four-speed gearbox with right-hand control," we continued, "and there is the usual Rolls-Royce friction servo motor on the gearbox to operate the brakes, those at the front being hydraulically controlled and those at the rear through a mechanical linkage."

We concluded our thoughts on the new Phantom VI - finished in dark green with chromium-plated fittings and mouldings - in style: "No further comment is necessary, because it represents the finest work which skill and conscientious craftsmanship can produce."

It's immensely pleasing to discover that this particular car is still alive and well today. Having delivered the newly coronated Queen to her first royal engagement in 1952, last summer it brought her granddaughter-in-law, Meghan Markle, the Duchess of Sussex, to Windsor Castle to be married to Prince Harry.

From the archive 1932: how will cars change in the next decade?

From the archive 1899: should doctors swap horse for car?

'National pride and spirit' is not about fawning praise that ignores all reality.

It is about celebrating what you are good at and backing it. For example UK has a strong automotive sector and world class creative industries. Maybe we should do more to back them, eh?