BACK TO ALL NEWS
Currently reading: Electric circuit: the UK's first EV-only track day
UP NEXT
New Lotus electric sports car to use Britishvolt batteries

Llandow circuit in South Wales at 9am. Cars start to trickle in. Owners gather around each other’s vehicles to chat. Some unload their car from a trailer. Some start to fit a spare set of wheels with track tyres. Others fiddle with the adjustable suspension to put it in its track setting. It’s a very common start to a track day at one of the UK’s motorsport venues. Except there are no engines to be warmed, no oil levels to be checked and no V8s coughing into life. In fact, the only noise these cars emit is a faint hum.

That’s because this is the UK’s first EV-only track day. It’s the brainchild of John Chambers, who runs Tevo Solutions, a business catering to suspension upgrades for Teslas. Few countries are as well catered for as the UK when it comes to track days, so you might imagine an EV-only track day wouldn’t be necessary but, according to Chambers, there are still lots of misconceptions. “Only a year and a half ago, only about 50% of tracks would allow EVs on in the first place, because they all were worried about fire and getting electrocuted if there was an accident,” he says.

“Another reason why I’ve organised this track day is that there’s this opinion that... EVs are just good at drag races because you see so many drag racing videos,” continues Chambers, adding that even owners aren’t aware of their cars’ potential.

Over the past few years, he’s gathered a small band of people who do track days in their Teslas, and some of those are in attendance at Llandow, but there’s a good mix of people and cars here, from diehards to those with a casual interest.

Aside from the Teslas, there are a couple of Porsche Taycans and Audi E-tron GTs here, as well as a few hopefuls in a Volkswagen ID 3 and e-Golf. Someone has even brought a converted first-generation Porsche Boxster. 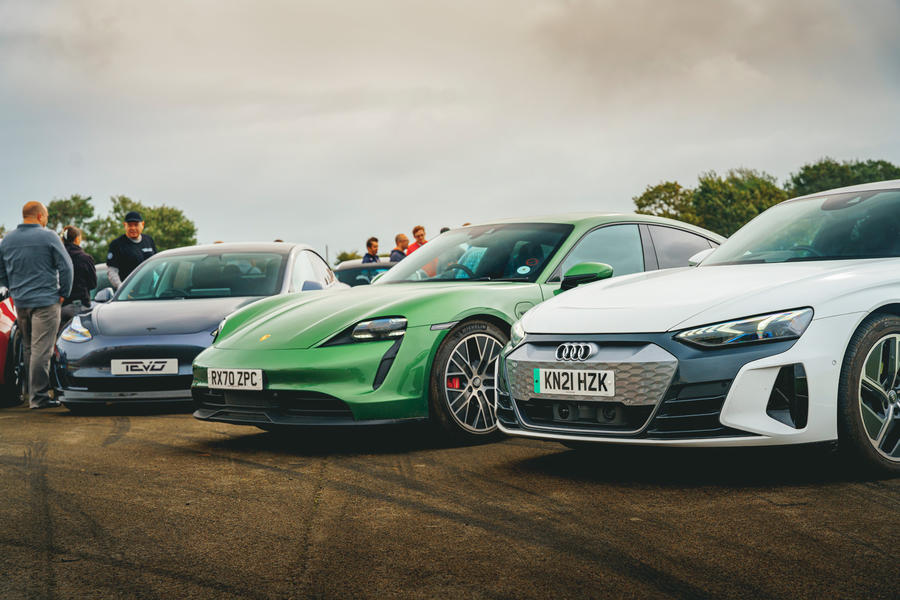 Everyone piles into the briefing room. “Remember that there is always something to hit, so be careful,” Chambers warns. Wisely, a trio of driving instructors are on standby to guide some of the novices in getting their 400bhp saloons around the track in one piece. So far, so conventional, well- organised track day.

“We’re being pioneers here. It’s all about changing people’s minds,” he continues. “You’re going to have to plan your own charging strategy. Don’t leave it until you’re down to 5% charge to come in: you still need to be able to get to a charger, and besides, below 15% you’re not going to get full power, anyway.” You don’t get that at most track days.

Without doubt, charge is one of the biggest challenges in using an EV as a track car. The Teslas can do more laps than you might imagine: 50 laps of Llandow is not unrealistic. However, at lunchtime, you could be forgiven for thinking the event has ended, because most drivers disappear in search of some charge. The closest Superchargers are at Sarn services, about 25 minutes away. Non-Teslas have to travel even further to find a proper rapid charger. On-site charging was considered but is not viable because of the cost and logistics of bringing in battery packs. Meanwhile, installinga diesel generator would be rather questionable.

There are a few other issues with caning EVs on track, even at a relatively short, tight one like Llandow. The first car to falter is the e-Golf. The owner campaigns a Subaru Impreza Turbo rally car and runs the e-Golf as his daily driver so he thought it would be good fun to trailer it to the track. Unfortunately, the car’s first-generation battery cooling system calls it quits after just two laps, limiting power until it cools down again. 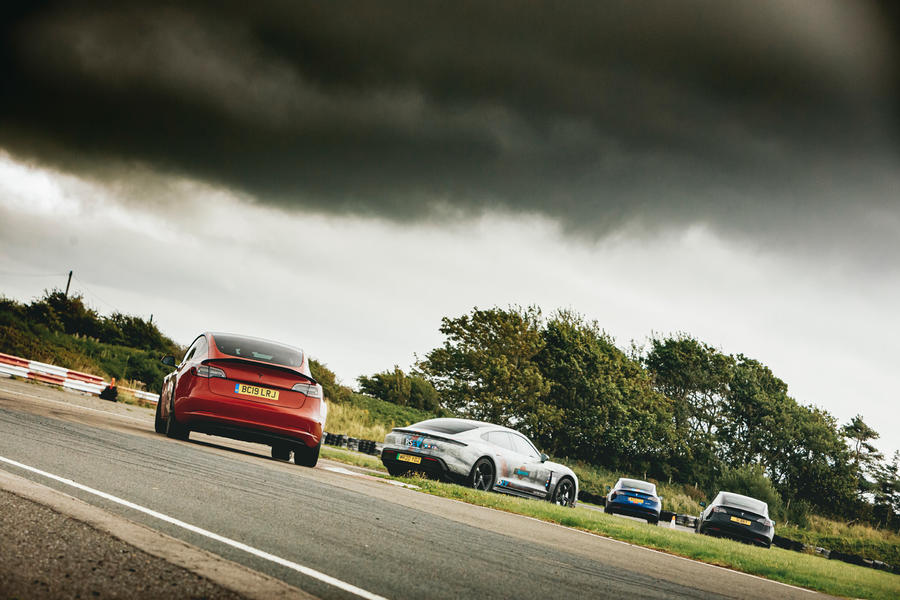 The newer ID 3 fares better, suffering no such issues, and the owner reports that the lowered springs make it a lot less rolly than a standard car. However, the issue here is the tyres, with the front left taking a beating and getting hot. Tyres are even more of a challenge on the heavier, faster cars, though. Both a Tesla Model 3 and a Porsche Taycan end up shredding the shoulder of their front left Michelins down to the cords.

There is huge enthusiasm here for EVs, and not necessarily in an Elon Musk-deifying way. The people here also have Subaru rally cars and Nissan GT-Rs, or run a workshop specialising in engine conversions, but EVs have opened up a different perspective, the possibility of a different kind of performance.

“You still hear a lot that EVs have got no soul or character,” says Chambers. “To me, that is secondary. It’s all about performance as far as I’m concerned.”

Although there is clearly a growing group of owners who want to use their EVs on track, this event won’t turn into a regular fixture for the time being. “I’m not setting myself up to be another track-day operator,” says Chambers. “It was really to prove a point to say that we could do it, and make it a bit of a landmark event.” A good point, well made. 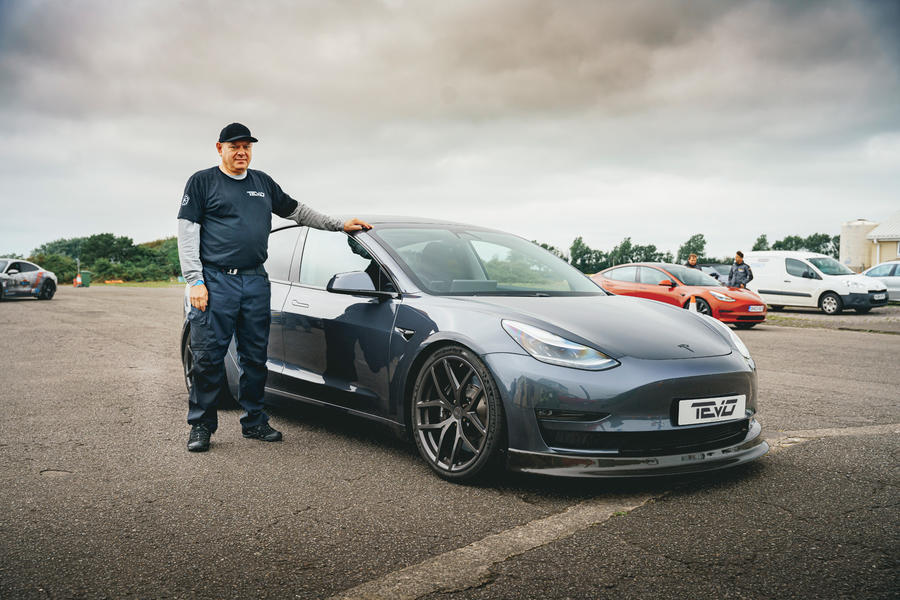 Given how much Tesla’s Elon Musk talks about how his cars will drive themselves, the blisteringly fast but heavy and slightly stodgy-looking Model 3 might seem an unlikely track car. However, Chambers, who has a background in motorsport, was immediately convinced by the Model 3’s performance and handling.

He also saw room for improvement, though, and now offers a selection of parts through his business, Tevo Solutions, to improve the ride, reduce brake fade and tame tyre wear on the track.

We took his demonstrator out for a couple of laps, and it felt remarkably neutral, with sharp turn-in, good adjustability on and off the power, and brakes that withstand a beating on track. And while you might miss a nice engine note on a B-road, when you’re focusing on lines and braking points, that doesn’t matter quite as much.

What exactly is the point of all this drivel?

Great idea, but they have got to install fast chargers. Otherwise, it's just weird.

So, a Trackday, EV Tyres don't last, dangerous infact,and, no facility to charge at the Track?!, who is going to make a fifty mile round trip?, that's an hour plus charge time, so call it two and half hours, yeah, don't see this EV Trackday tak8ng off any time soon.