BACK TO ALL NEWS
Currently reading: Dramatic Nissan BladeGlider concept returns
UP NEXT
Why last-mile delivery EVs are big business for car and retail firms

The BladeGlider appeared to have been shunted to near to the back of Nissan’s priority list early last year by then incoming product planning chief Philippe Klein.

But now the concept has re-emerged as a fully working prototype developed in collaboration with Williams Advanced Engineering, as Nissan seeks to maintain its reputation as an industry leader for spearheading new niches and electric propulsion.

Nissan officially says it has no production plans for the BladeGlider, but the firm is known to want an electric sports car in its future expanded line-up of electric cars, and the advanced level of engineering that has gone into the BladeGlider hints that it could be a candidate to join the range in the future.

Indeed, the BladeGlider was well received as a concept car at the 2013 Tokyo motor show, with then Nissan product boss Andy Palmer planning to have it in production by 2017 with a £30,000 price as an “anti-establishment electric sports car”. 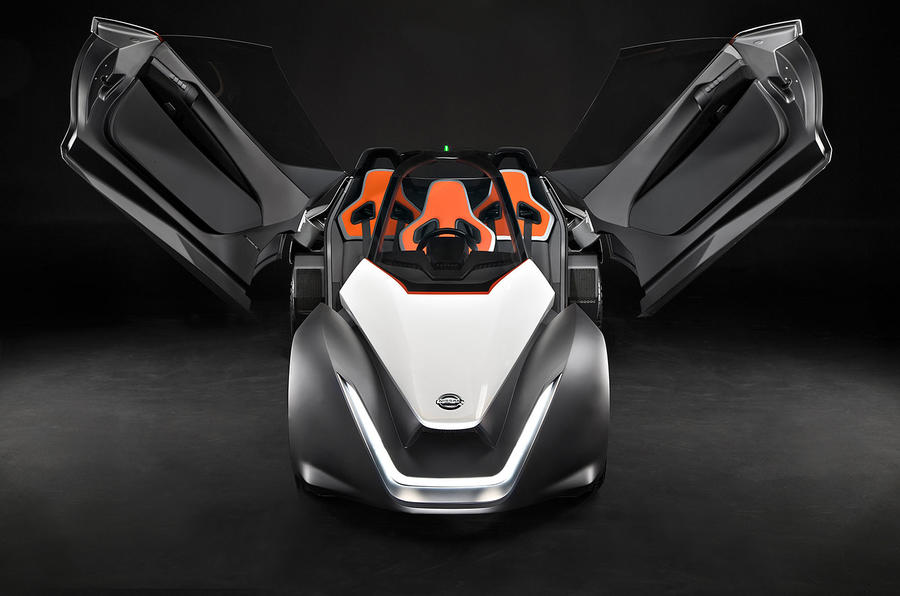 However, at the 2015 Geneva motor show Klein told Autocar the BladeGlider was “not among the immediate priorities” of the firm. He added: “We have the concept car, and it has the ability to surprise, but it is not big in our plans now. Before we jump in with a production car there is a path to take - and first we must see the opportunity is there.”

In developing the concept to such an advanced stage since Klein’s comments, Nissan appears to have decided that an opportunity for the BladeGlider exists. The company says it has spent the past two years on the “design, engineering and development” of the BladeGlider, and officially the car is “an exciting, real-life study into the potential of advanced EV performance”.

A Nissan statement read: “BladeGlider epitomises Intelligent Mobility, a philosophy to make Nissan cars more exciting by redefining how they are driven, powered and integrated into society.”

Nissan marketing boss Roel de Vries told Autocar that there were no production plans for the concept at present, and the firm instead would be using it to look at the future design, engineering, packaging and driving performance of electric sports cars. He also said that the BladeGlider has always been in development within Nissan, and that it is already close to production in its current form, even if there are no plans for now.

However, de Vries did confirm that Nissan’s range of electric cars would increase in the future, and a sports car is understood to be part of these plans.

Nissan hasn’t offered any clues as to the BladeGlider’s underpinnings, save for describing the car as having an “advanced chassis configuration”. Earlier prototype versions are understood to have been based on the Ariel Atom, and a weight distribution of 30% front, 70% rear was previously quoted by Nissan. 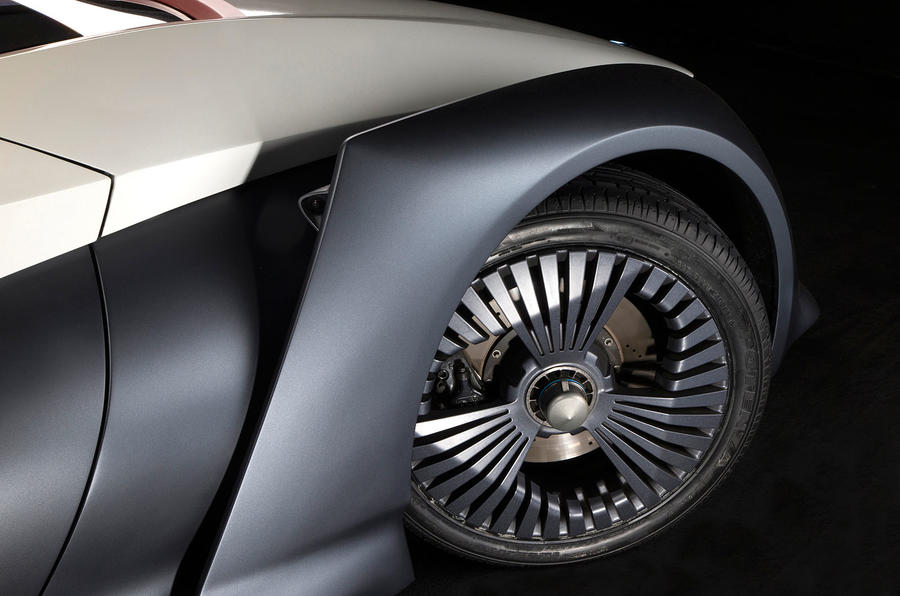 The car has three seats, with a central driver’s seat flanked by one each side and slightly behind, while the track is significantly wider at the back than the front for what Nissan describes as “optimum aerodynamic efficiency and handling stability”.

The BladeGlider is 4300mm long, 1850mm wide and 1300mm high, with a wheelbase of 2800mm. This makes it 79mm shorter, 50mm wider and 5mm taller than a Porsche Cayman, although the Nissan's wheelbase is some 325mm longer than that of the German coupé.

There is, of course, no engine in the BladeGlider, so the need not to fit one in part helps define its unique shape. Drive comes from two electric motors, one for each rear wheel, which are powered by a high-performance 220kW lithium ion battery pack mounted towards the rear of the car. The combined peak power output of the electric motors is 268bhp, while combined peak torque is 521lb ft.

One of Williams’ roles in the BladeGlider has been in developing the electric powertrain. Initial performance tests carried out by Williams has revealed a top speed in excess of 115mph and a 0-62mph time of less than five seconds. 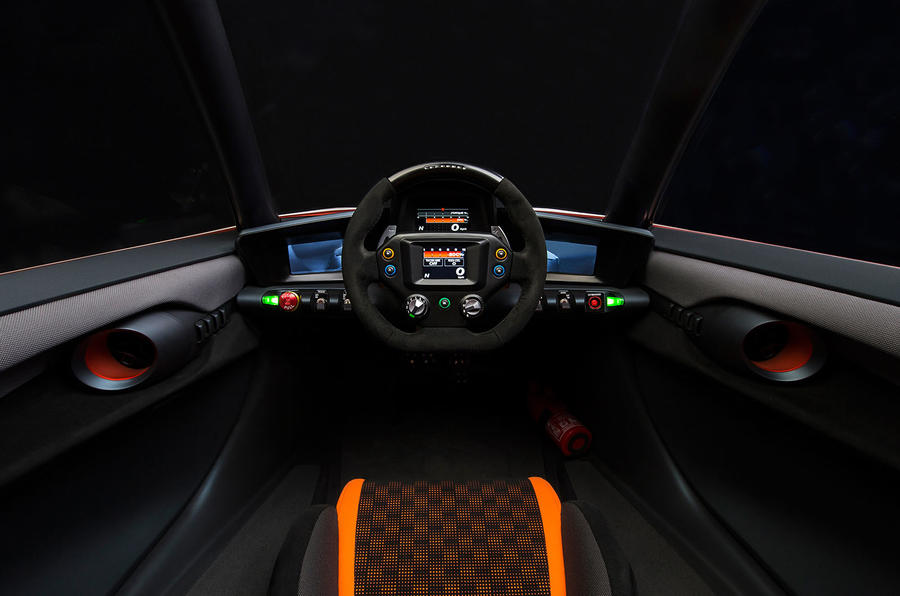 One of the key features of the electric powertrain is its torque vectoring function, which governs the amount of torque being delivered to each individual wheel. The system has three modes to change the driving characteristics: Off, Agile and Drift. Nissan claims the system is “designed to add to the driving experience rather than govern it”.

Ben Bowlby, designer of the radical Deltawing race car, was involved in the original BladeGlider concept and told Autocar last year that the goal was to set a “handling benchmark” in the industry. "So extreme handling and extreme fun and a whole new experience, a totally different driving experience,” he said.

Williams has also been involved in developing the aerodynamics, chassis and vehicle dynamics, as well as building two prototypes. The prototypes are currently in Rio de Janeiro, Brazil, where one is on static display at the Olympics, which Nissan sponsors, and the other is demonstrating the car’s capabilities with passenger rides.

The styling has evolved from that of the original concept, with improved aerodynamics and greater production viability clearly in mind. Apart from the actual bodyshape of the BladeGlider, its next most dramatic feature is the rear-hinged dihedral doors to access the cabin. 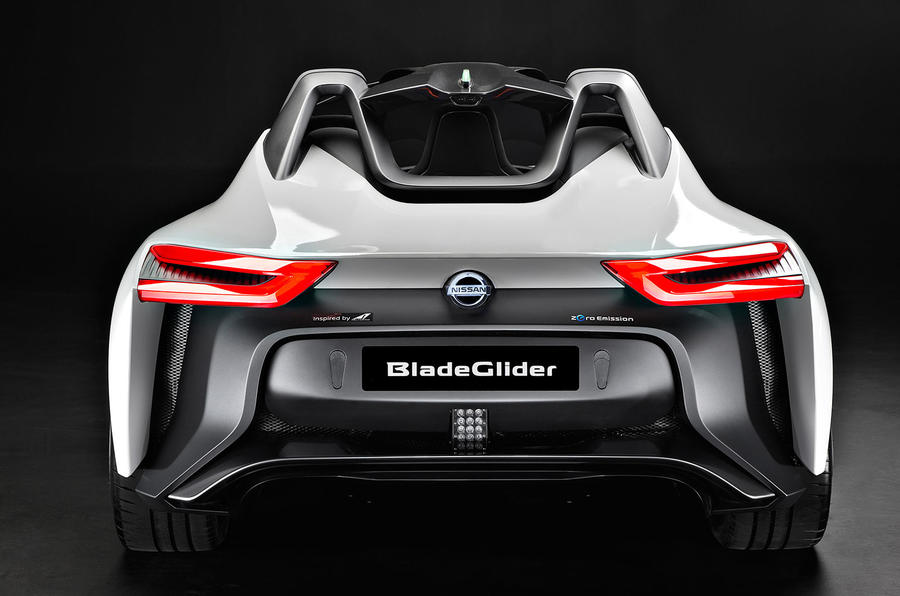 The BladeGlider has a partially open roof with an integrated roll-over safety structure, a layout that Nissan says mixes the open-top feel of a race car with the safety of a coupé. Indeed, such safety features show just how advanced an engineering job has been done on the BladeGlider to bring it to this point.

The high-tech, race car-inspired interior has two screens to display driver information, and all major controls are housed on the steering wheel, including the indicators and the dials to adjust the driving modes. Each occupant has a four-point harness, and the seats are coated in a grippy material to keep occupants secure in the cabin.

The BladeGlider does without conventional exterior mirrors in order to further boost the aerodynamics of the car, with two screens either side of the steering wheel instead displaying images from rear-facing cameras in place of the mirrors.

Nissan boss Carlos Ghosn said the company “believes that enthusiasts should look forward to a zero-emission future, and the BladeGlider is the perfect demonstration of that”. He added: “It’s the electric vehicle for car lovers.”

What’s changed in three years since the original concept?

The concept seemed to be on the backburner. How come it has now made a comeback?

"There was a discussion as to whether or not it would be a production car. It was not intended to make production quickly. But we never stopped or slowed down with developing it. For us, this is a study into how future enthusiast driving can be and what EV can do for packaging and design [of such cars]. There was speculation at the time [about building it] but that was not the intention."

Why has it been engineered to such an advanced level?

"It’s not been built to any specific market requirements or homologation, but it’s as close as you can get to a fully operational car. We will use it to study packaging, what EV can give us for driving. It’s a very different experience. It’s a study into what the future can be."

Will you build it?

"No, it’s not the intention to build it. We’ve built the two prototypes to find out how they work, what they are able to do. We’ll have many requests, but we’re planning to learn, develop and share with this car."

Who’s it aimed at?

"The younger generation who are looking for exciting EVs and a different experience. It’s aimed at a future generation in terms of age. We always make cars for young, sporty, energised people. This is close to what we’ve done before, and will do in the future utilising EVs."

Theoretically, how close to production is it?

"If you have a chance to drive it, it’s very close. The driving experience is unique. The fact that the car has been engineered this far shows it’s possible to be done and it is fun to drive. Concepts always test people, so let's see what reactions come back."

What kind of statement does it make?

"It makes one from many angles: packaging, designing, engineering, what people see as a future car. The concept has many objectives, but being a concept to preview a model coming next year isn’t one."

Will you do future EV sports cars?

"We have made a statement to democratise EVs. We have the best-selling EV with the Leaf, and the target is to get volumes and range up, and costs down. We’ve done that. Looking at the range still now, to take away range anxiety. The next step is more models – more models at the heart of the market. Expect more EVs from Nissan."

What can the BladeGlider do for the brand?

"It’s a tech statement to confirm the direction we’re going as a brand. It’s a statement on design, an exciting one. It’s also a concept car that works. We as a brand want to do these. Leaf is one such statement that people can buy. The IDS concept from last year is another, as the autonomous tech on it is now available. The BladeGlider does this. It’s a tech and design statement that shows as a brand we can genuinely implement such things."

Can't accuse Nissan of at least trying to make something genuinely different. As an enthusiast, it certainly appeals more than a Leaf. Good for you Nissan, hope you build it!
Phil R 4 August 2016

At 30k that will sell so well when you put it up against a Boxster or Elise. 220kWh battery sounds a little ambitious though.
View all comments (5)