BACK TO ALL NEWS
Currently reading: Detroit motor show 2012: Rav4/IQ EV for 2012
UP NEXT
Style vs substance: cars which might surprise you

All-electric versions of the Toyota iQ and the Toyota Rav4 will go into production this year, Toyota has confirmed at the Detroit motor show.

Rather than being regular production vehicles, the pair will enter small-scale production and will be used to "gauge consumer preferences, usage patterns and daily requirements", according to Toyota US chief Jim Lentz.

The iQ will be badged Scion iQ EV and will have an all-electric range of no more than 50miles. It will be marketed at inner city car clubs, where it will only be required to cover small distances.

The Rav4 EV, which is on display at Detroit today, features a Tesla-developed power train and is good for more than 100 miles, Lentz said. It will also be the only manufacturer-backed SUV in the market.

The tests are likely to last around three years, at which point Toyota hopes the technology would have evolved enough to enter mass market production. 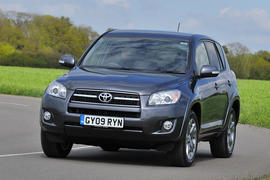 All electric is hardly viable, these should be hybrids.I was reading in the paper that wind farms increase CO2 emissions, so anyone who wants to be green should buy an electric car and charge it from their own solar panels ( I know of one individual who allegedly does this )