BACK TO ALL NEWS
Currently reading: Toyota Mirai long-term test review: running costs
UP NEXT
Testing the UK's newest circuit in a Porsche Cayenne Turbo GT

Toyota says the Mirai will do for the hydrogen fuel cell car what the Prius did for the hybrid. So is this really the future?
Open gallery
Close

Once they’ve established that it’s not prone to imminent explosion (if anything, hydrogen is safer to carry than petrol), the second thing people want to know about the Toyota Mirai is how fuel efficient it is.

After all, the Mirai is quite closely related to the Prius, which has economy at its core. Is the Mirai economical too?

We were keen to find a figure at the outset, but the more we thought about it, the more truth seemed to be carried in the words ‘depends how you measure it’. The easiest figure to give is miles per kilogram: the Mirai takes around 4.7kg of compressed hydrogen when the fuel gauge says it’s as near as we’re prepared to get to bone empty, at which point it has done around 270 miles. That calculation is easy: the car does 57.02 miles per kilo of hydrogen. Trouble is, this doesn’t help much, not least because compressed hydrogen is about eight times lighter than petrol.

Then we spotted a figure in the Mirai brochure stating that a tankful equates ‘roughly’ to 60 litres of conventional fuel capacity. That means 4.7kg of consumed hydrogen equates roughly to 56.4 litres, or 10.3 gallons. It gives you a range of 270 miles, thus in ‘petrol equivalent’ the Mirai returns 26.2mpg. Not impressive, if it matters.

Ergo, running a similarly sized petrol car costs roughly 90% of what we’re paying to run the Mirai.It seems a steal given that this is still very much an experimental car.

It’s weird how differently people react to the promise of hydrogen fuel cell cars – such as the 3000-mile white Toyota Mirai that joined our long-term test fleet and will be around for the next six months.

When, at a recent gathering, I mentioned to a few people that my odd-looking Toyota was powered by hydrogen and would travel through its entire life without emitting a solitary atom of noxious exhaust gas, one group fastened instantly onto the relatively pedestrian fact that filling stations are rare within the London area. They dissolved into laughter and dismissed the whole idea.

The others were quite different. For them, it was as if the holy grail of perpetual motion had landed on their doorstep. The fact that this car ran on electricity generated from non-polluting hydrogen, produced from a substance as ordinary and plentiful as water – well, that was magic. Especially when you learned that the hydrogen car is actually smoother and quieter than a vehicle powered by an internal combustion engine. 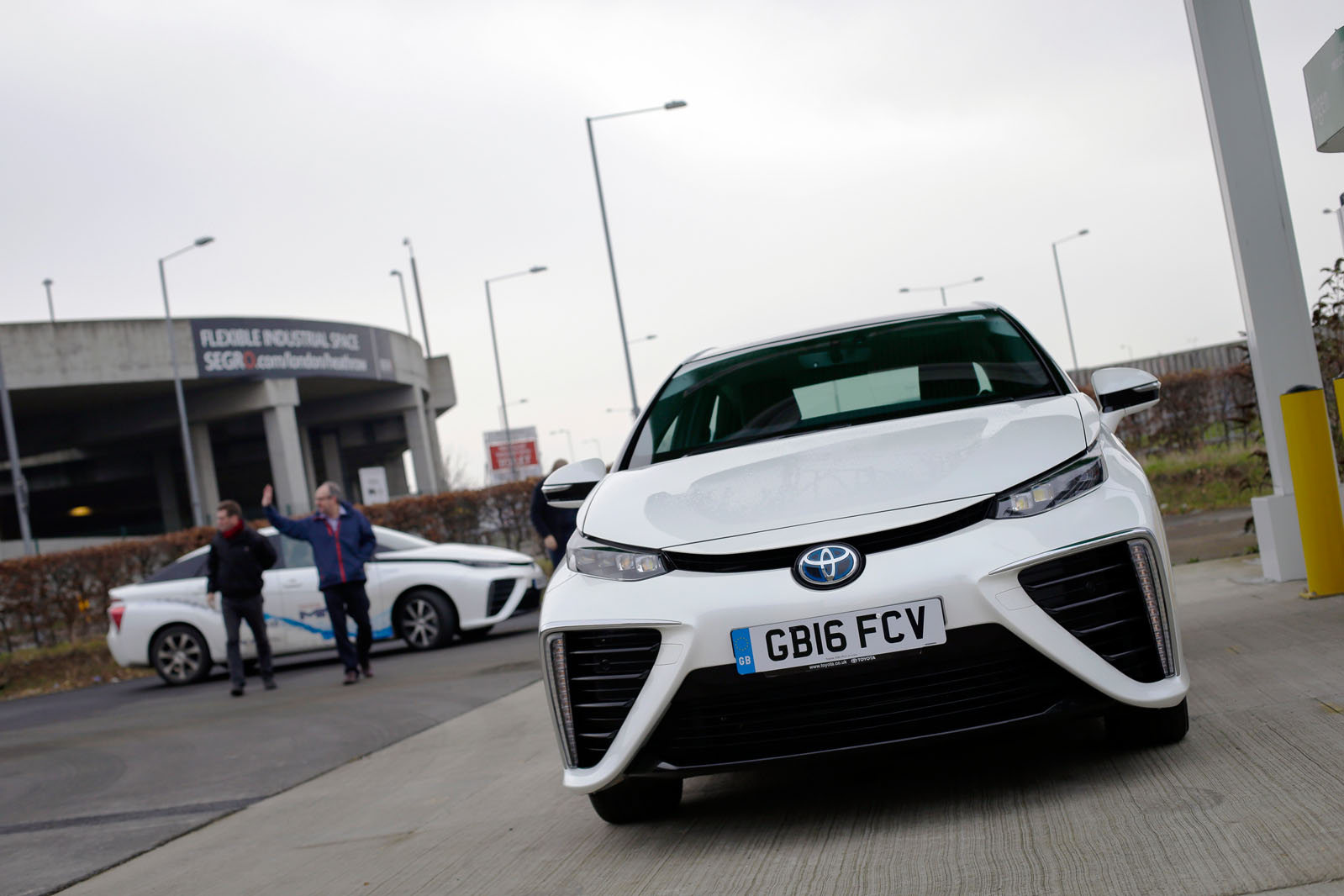 To come clean, my sympathies are with the second group. The first motoring magazine I ever bought, 56 years ago, contained a bullish story about the potential of hydrogen fuel cells. It seemed magic then and it’s still magic now, despite the littlecelebrated fact that indoor electric fork-lift trucks have been using on-board hydrogen fuel stacks for decades to avoid filling factories with exhaust fumes. Nothing is new…

However, what really launched us at Autocar on a mission to become one of the UK’s dozen or so Mirai ‘owners’ was hearing how Toyota’s bigwigs are increasingly linking their achievements with the Toyota Prius hybrid with their dreams for today’s Mirai.

Back in 1997 the oddball Prius Mk1 appeared on the market amid a myriad of weird claims, not to mention bouncy suspension and styling not dissimilar to a potato. You’d never have seen yourself buying one. But by 2003 we were buying them, and in big numbers. Today, the world’s Prius population is closing in on 10 million and company officials are starting to talk about the Mirai’s trajectory in the same breath.

Who wouldn’t want to know more about such a car, especially one that looks so futuristic? Regular readers will know that we are already familiar with hydrogen thanks to the Hyundai ix35 Fuel Cell on our long-term test fleet, but whereas the Korean car is based on an existing model, the Mirai is all new.

Toyota marketing manager Jon Hunt, a hydrogen enthusiast whose day job is putting together big fleet deals involving more conventional Toyotas, donated one of his busy days to getting us in the loop. 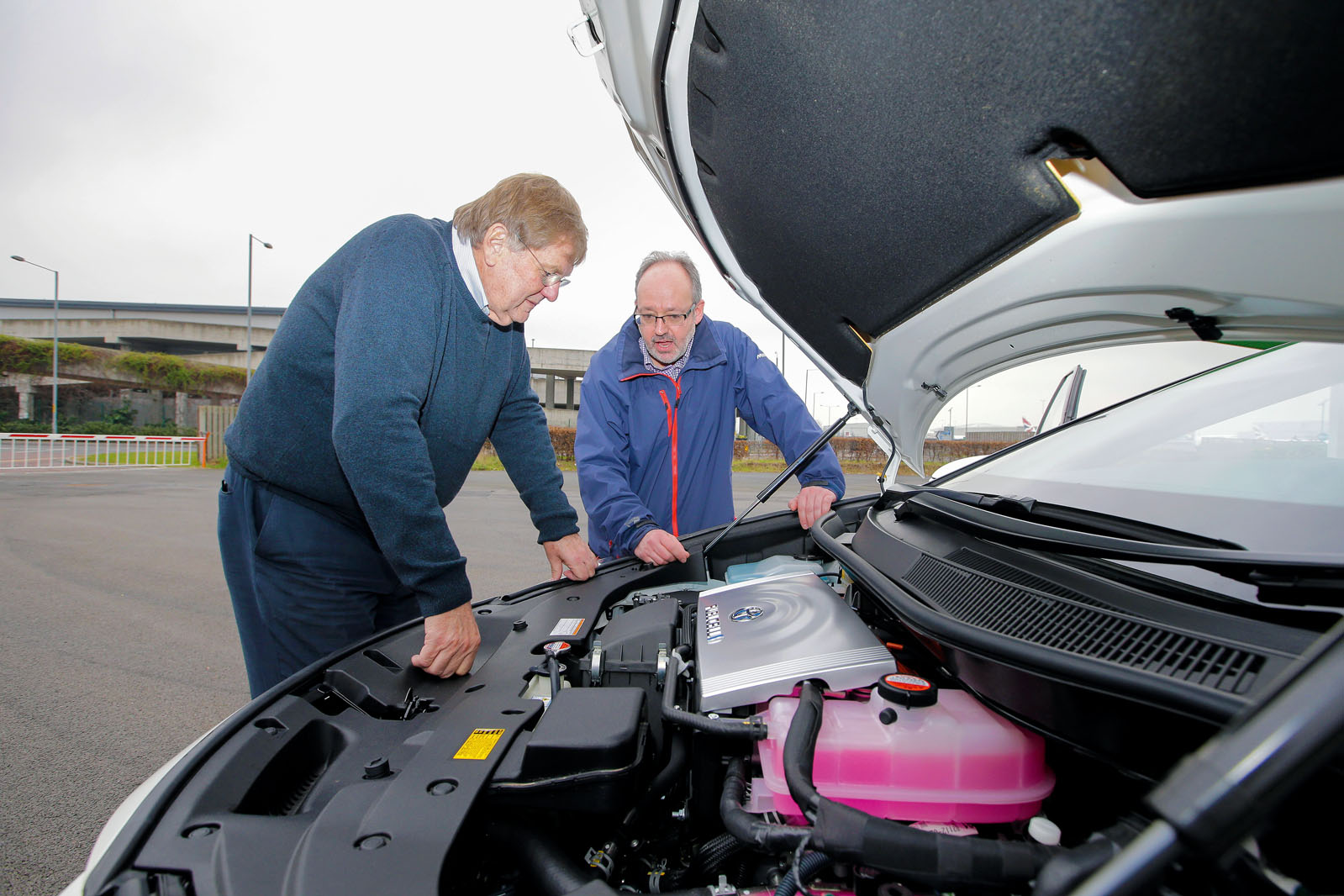 Had we been able to do this for real, Hunt told us, we’d have had to part with a £61,500 purchase price, although a retail customer would more likely pay £750 per month, including fuel. And just so you know, a Mirai carries 60 litres of hydrogen compressed into its tanks at 700 bar, and when it’s full, the fuel weighs just 5kg, compared with 40kg for 60 litres of petrol.

We’ve had some Mirai experience before, but this was different. London has four hydrogen refuelling stations – Teddington, Heathrow, Hendon and Rainham – and will soon have its most commercial of all at the vast Cobham service area on the M25.

Jon’s plan was to meet us at Autocar’s Twickenham HQ with our car and another, then take us to the nearby Teddington station and the one a little further away at Heathrow.

A Mirai is much like a Nissan Leaf to drive. Same torque from nothing. Same absence of noise (just the faint chuntering of a compressor at times). Same precise delivery of the torque you asked for. (You realise at times like this what ‘wrinkles’ there are in the power delivery of the smoothest internal combustion engine.) There is some consciousness of road noise because there’s nothing else to drown it, and the Mirai has a gently damped, very soft ride, helped by the fact that this is a 4.9m-long car that weighs close to two tonnes with a couple of occupants on board.

Refuelling is a breeze. It’s not so different from the business of filling your car with petrol, except car and pump have to bond and check one another (fuel flows at 700 bar and minus 40deg C) and you don’t have to hang onto the handle. But it’s nothing like recharging a battery car. 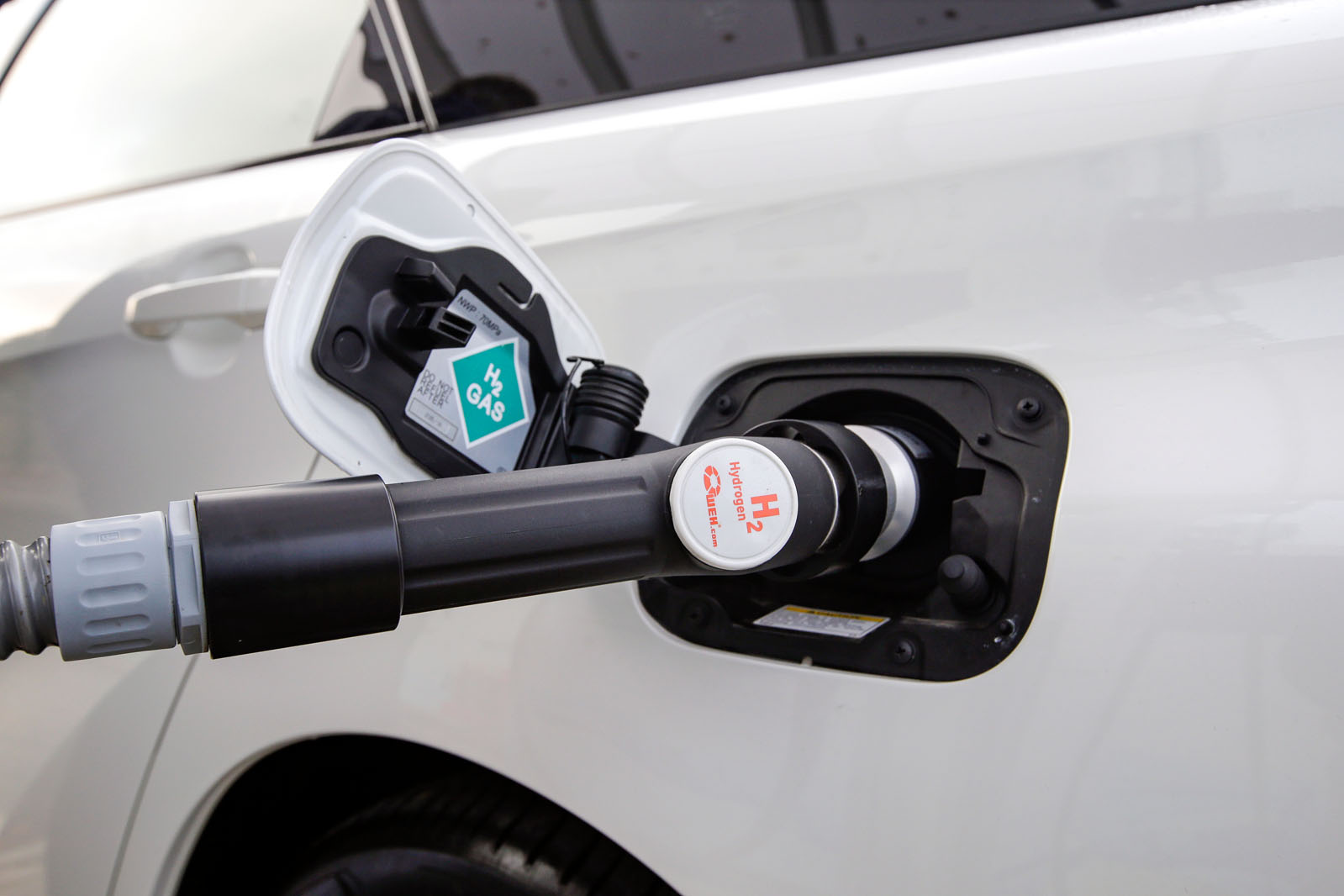 Neither is range anxiety much of an issue. Toyota claims a range of “up to 300 miles” for its 5kg of fuel, but we’ve not extended it that far yet, tending to leave 100 miles in the tank. But it’s steady give-and-take driving that provides the best mileage and range, where the regenerative braking system gets a chance to replenish the (smallish) propulsion battery from time to time.

In essence, though, it’s a simple, quiet, ultra-refined, gearless but very torquey car. The quietness and smoothness don’t encourage you to drive it hard, although it’ll do 111mph flat out and 0-60mph in a decent 9.6sec. The steering and stability are good, too.

For now, however, the buzz is knowing that every mile we do costs the environment nothing from our tailpipe, and that writing about the pleasure implicit in owning and driving one of these novel cars might contribute, just a bit, to their greater eventual popularity.

Thanks to you for sharing this interesting, informative and impressive article with us. I've really very enjoyed it. Do you know about introduced updated Mercedes-Benz Marco Polo in Activity version. The new camper will gain access to more rough terrain. Mercedes-Benz has offered Europeans an updated Mercedes-Benz Marco Polo Activity. Buyers will receive several transmission options. So, the "older" Activity 300D develops 236 horsepower. To “hundreds” of such carzaamin(.)com/ accelerates in 7.9 seconds, and its maximum speed is more than 200 km / h. Also available for purchase are the 250d (188 hp), 220d (161 hp), 200d (134 hp) and 170d (101 hp) versions. The last gets front-wheel drive and 6MKPP. The rest of the modifications relies on a 9-speed automatic.

Efficiency best not measured in mpg

The quoted 26 mpg for the Toyota is misleading, since that figure is based on the current relative tax paid cost of hydrogen  versus petrol. The only true way to compare the efficiency of cars using different fuels is to look at how far they travel on a fixed amount of energy. And since hydrogen has around 33 kWh of energy per kilogram weight, and the Mirai can travel around 57 miles on one kg of hydrogen, its efficiency is around 1.7 miles per kWh.

Using the same measure the efficiency of a typical petrol car of the Mirai's size (achieving  40mpg) is around 1 mile per kW, while a typical electric car achievs around 3 mile per kWh.  So the fuel cell car is more efficient than a petrol car with the convenience and cleanliness of an electric car, but it is not as efficient as a pure electric one.

Really the fuel cell car is just another electric car, albeit one which generates its own electricity rather than having to be topped up from the grid - and that's the reason why it isn't as efficient, because there are energy losses in converting the hydrogen fuel into useful electric energy.

I don't think that big corporations like Honda, Toyota, Hyundai are daft. They would not be investing billions of pounds into fuel cell development if they were not confident of its long term viability. And let's face it, this approach has certainly paid off with the hybrid, despite the fact that the early models looked a bit shaky.

or you could say it takes 30-35KWh of enegy to create 1 kilo of hydrogen (not including transport costs) which will propel a Mirra 50 miles MAX. That same enegy will propel a Leaf 150 miles MAX. Therefore an Electric car is 3 times more efficient than a Hydrogen car, half the price to buy, at least 5 times cheaper in fuel costs to the consumer.

How about a comparison with a

How about a comparison with a prius, tesla, diesel and petrol cars, fill them all from empty and drive til they stop, compare the ranges pence per mile and tailpipe emissions.