BACK TO ALL NEWS
Currently reading: A brief history of Alpine, 1955 - 2017
UP NEXT
Rolls-Royce road trip: remembering the marque's epic seaplane racers

With the modern-day Alpine A110 just given a five-star verdict, we run through some of the brand's best in its 61-year history
Open gallery
Close

The Alpine A110 has been reborn with a new sports car set to be on UK roads in early 2018, which has just been given five stars at the hands of our testers.

However, while the brand’s Monte Carlo Rally, Le Mans and World Rally Championship wins in the 1960s and 1970s remain the stuff of folklore in France, part of the nation’s proud history of underdog triumphs, the brand is little known in the UK.

That’s chiefly because few of its cars were sold here, and those that were - the Alpine GTA, Alpine A610 and Alpine Spider - found homes in tiny numbers, and were badged as Renaults or Gordinis, sold through just seven so-called Renault Performance Centres.

But while they sold in tens rather than even hundreds or thousands, there are still two Alpine owners clubs in the UK, and the reborn brand has high hopes for future sales, predicting the UK’s love of sports cars will make it Europe’s third biggest market for the car.

The firm’s heritage certainly stands it in good stead as it vies to win hearts and minds as an authentic car maker. It’s founder, Jean Rédélé, was born into a motorsport-mad family, his father Emile Rédélé first working as a mechanic for Renault factory Grand Prix driver Ferenc Szisz - winner of the Grand Prix de la Sarthe in 1906 at Le Mans and runner-up in the Grand Prix de l'A.C.F. in Dieppe in 1907.

At the conclusion of the First World War Louis Renault asked Emile Rédélé to open a Renault dealership in Dieppe. Once settled, he married and had three sons - with Jean, the first born, completing business and economics studies in Paris during World War Two. His studies included a stint of work experience at Renault, prompting a report on some of the firm’s work practices that was sufficiently outspoken to attract the attention of Pierre Dreyfus, the CEO of Renault.

Asked to put his ideas into action, Rédélé was appointed Renault’s official dealer in Dieppe, following in the footsteps of his father. At 24, he was the youngest car dealer in France and by 1950 he had decided to take the new Renault 4CV into competition, reasoning that  “racing is the best way to test production cars and victory is the best sales tool”. 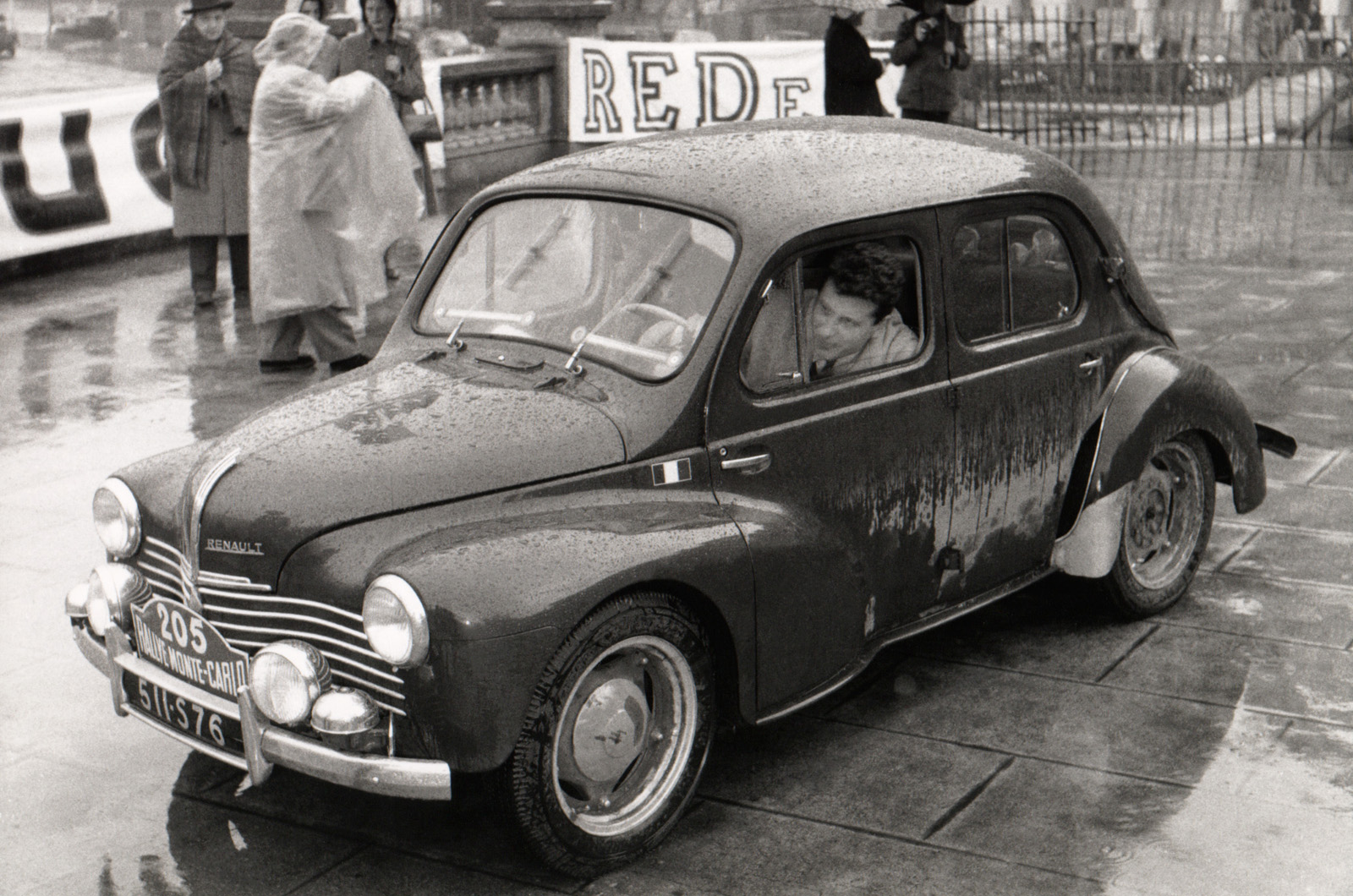 Rédélé competition debut ended in failure however, when he slipped outside the time limit on a snow lashed Monte Carlo Rally in 1950. Undeterred, he entered the inaugural Rallye de Dieppe and, bouyed by home advantage, won outright.

That he has left the more powerful Peugeot 203s in his wake didn’t go unnoticed, and the press and senior management at Renault were enthralled. The 1063 racing special version of the 4CV was prepared and then honed through bespoke bodywork and a new, five-speed gearbox; success followed, including a class win on the Mille Miglia.

In 1952, Renault entered him at Le Mans and with two hours to go he was leading his class, only for mechanical issues to intervene.

For 1953 he had set his sights on a new Renault Spéciale, coachbuilt in Italy, taking it to victory on its first outing, the Rallye de Dieppe. Leaving Porsche and Jaguar in his wake, the factory were again quick to applaud his success, and their excitement was only heightened when he then won the Copa de Lisboa in Portugal.

In 1954, Rédélé won the Mille Miglia and then the Critérium des Alpes - the latter of which was to take on huge significance when it came to naming his cars. “I thoroughly enjoyed crossing the Alps in my Renault 4CV, and that gave me the idea of calling my future cars ‘Alpines’. It was important to me that my customers experienced that same driving pleasure at the wheel of the car I wanted to build,” said Rédélé.

Now considered a leading global driver, Rédélé continued to compete, both in a coachbuilt A106 and a second car built to his specifications in Italy, which was run for his friend and fellow Renault dealer Jean-Claude Galtier. In 1955 Galtier won the Mille Miglia in the ‘Rédélé Spéciale’, with Rédélé finishing second in his A106 - a one-two that convinced Rédélé to set up his own team, Alpine, with bases in Paris and Dieppe.

The founding of Alpine

The Société des Automobiles Alpine was founded on June 25, 1955, and a month later Rédélé unveiled three A106 Coach models (‘A’ for Alpine and ‘106’ in relation to the reference number - 1062 - of the 4CV, which had served as a source for parts). In a patriotic nod, the first car was painted blue, the second white and the third red. 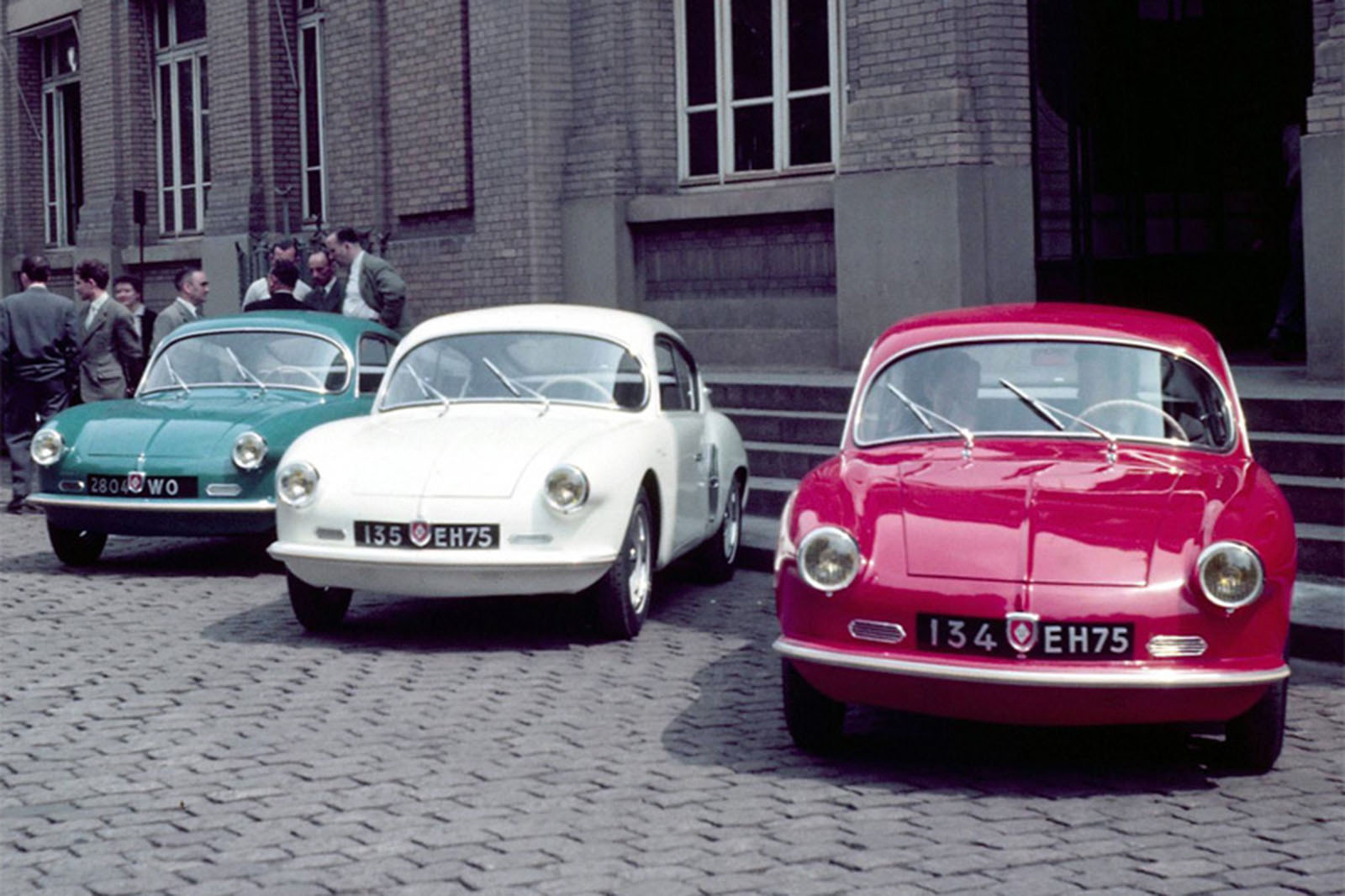 With Renault’s top brass backing the idea, the cars and Alpine brand were launched at the 1955 Paris motor show. Rédélé’s principles were simple: he wanted innovatively designed cars, equipped with simple but competitive mechanicals underneath a lightweight, attractive body, while using the greatest number of mass-produced parts possible in order to ensure low prices and maintenance costs in relation to the car’s performance.

In 1958, the A106 evolved into the A108, initially using the old platform but in 1960 adopting the famed ‘beams and backbone’ that Colin Chapman is perhaps best known for with the Lotus Elan, which was launched around the same time. This was a pivotal time for the nascent company, and 251 cars later the Coach and then coupé models made way in turn for the cabriolet and then famed Berlinette.

Equipped with the same engine as the Renault Dauphine, the A108 soon morphed into the A110, which made extensive use of Renault 8 parts and a reworked rear. It was an instant success, both as a road car and competition car, with the latter side of the company starting as an outlet for rally cars but evolving to run endurance racing prototypes, hillclimb cars, ice racers, rallycross cars and eventually even single-seaters. 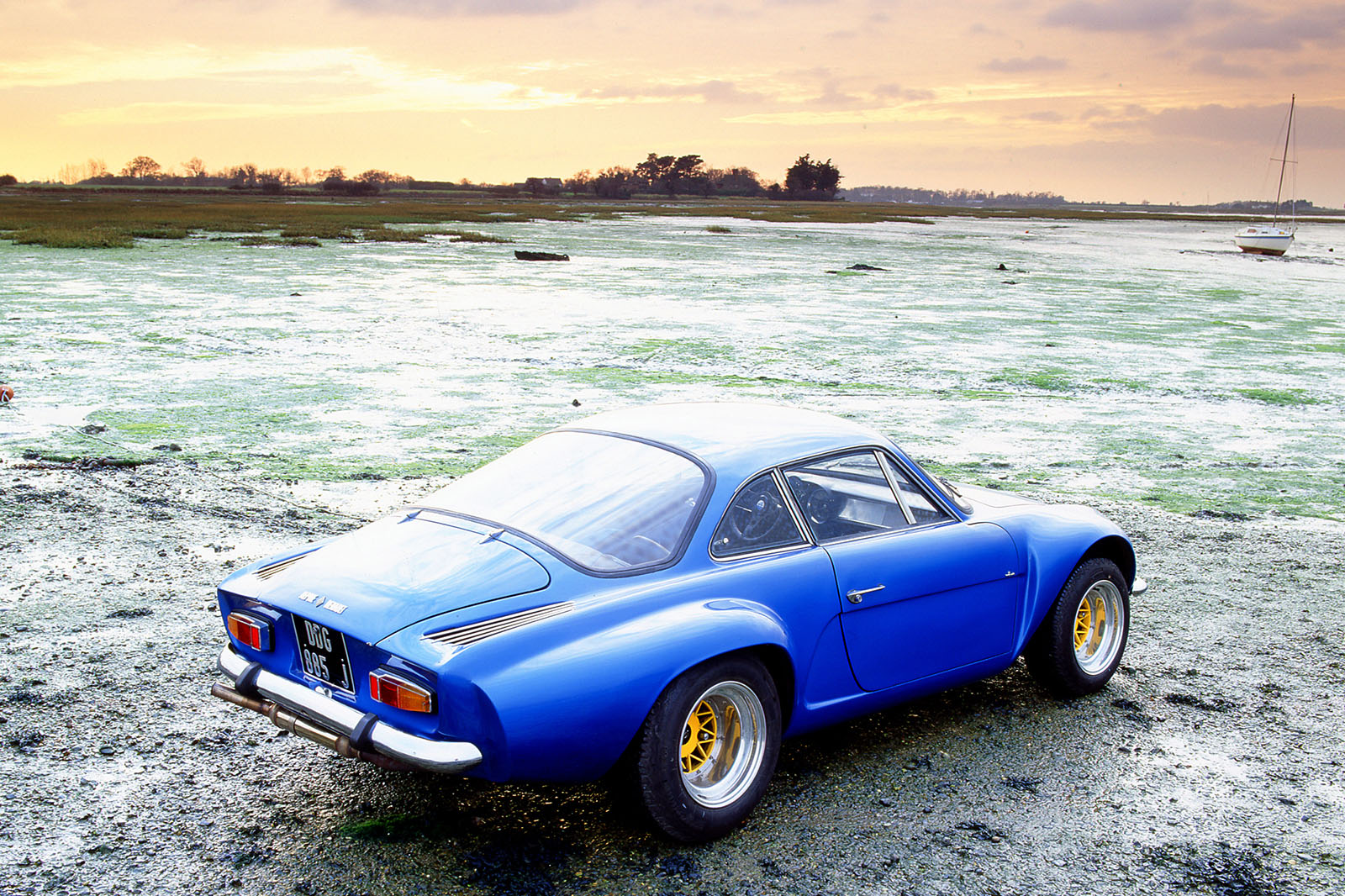 A110 derivatives came thick and fast, with power first coming from a 1108cc engine, then 1255cc, then 1565cc and then 1605cc. Styling tweaks were as numerous, ranging from a front grille with four headlights, widened wings, a front-mounted radiator, a removable rear skirt and more. In 1977 it ended production after more than 7500 units had been sold, called the 1600 SX and powered by a 1647cc engine

Alpine also gained notoriety for the way it grew its export business in Brazil, Spain, Mexico and then Bulgaria, outsourcing manufacturing to willing partners, on the reasoning that the underpinnings were rock solid Renault parts and that the Alpine modifications didn’t require significant skill to apply. 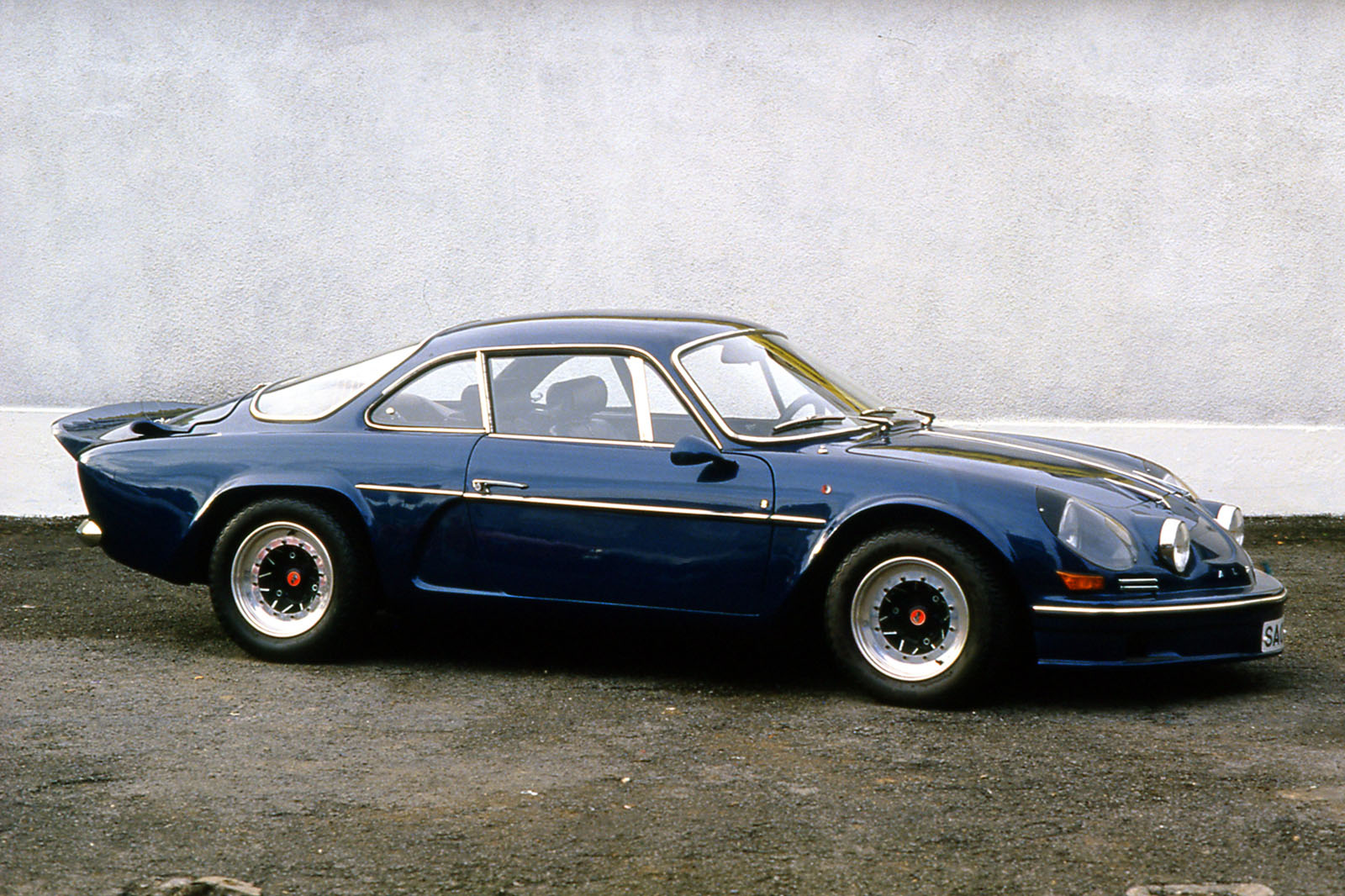 At the 1971 Geneva Motor Show Rédélé revealed a completely new car, the A310, which was designed to take on the Porsche 911 and developed hand-in-hand with the research department of Renault Engineering. The timing could not have been worse, however, with the fuel crisis of 1973 killing sales of such cars and leading to Renault taking a 70% stake in the company to save it from extinction.

Renault’s majority stake, in turn, led to the death of Alpine’s competition department, replaced by Renault Sport, run by celebrated driver future F1 team Gérard Larrousse and the basis of the company today. 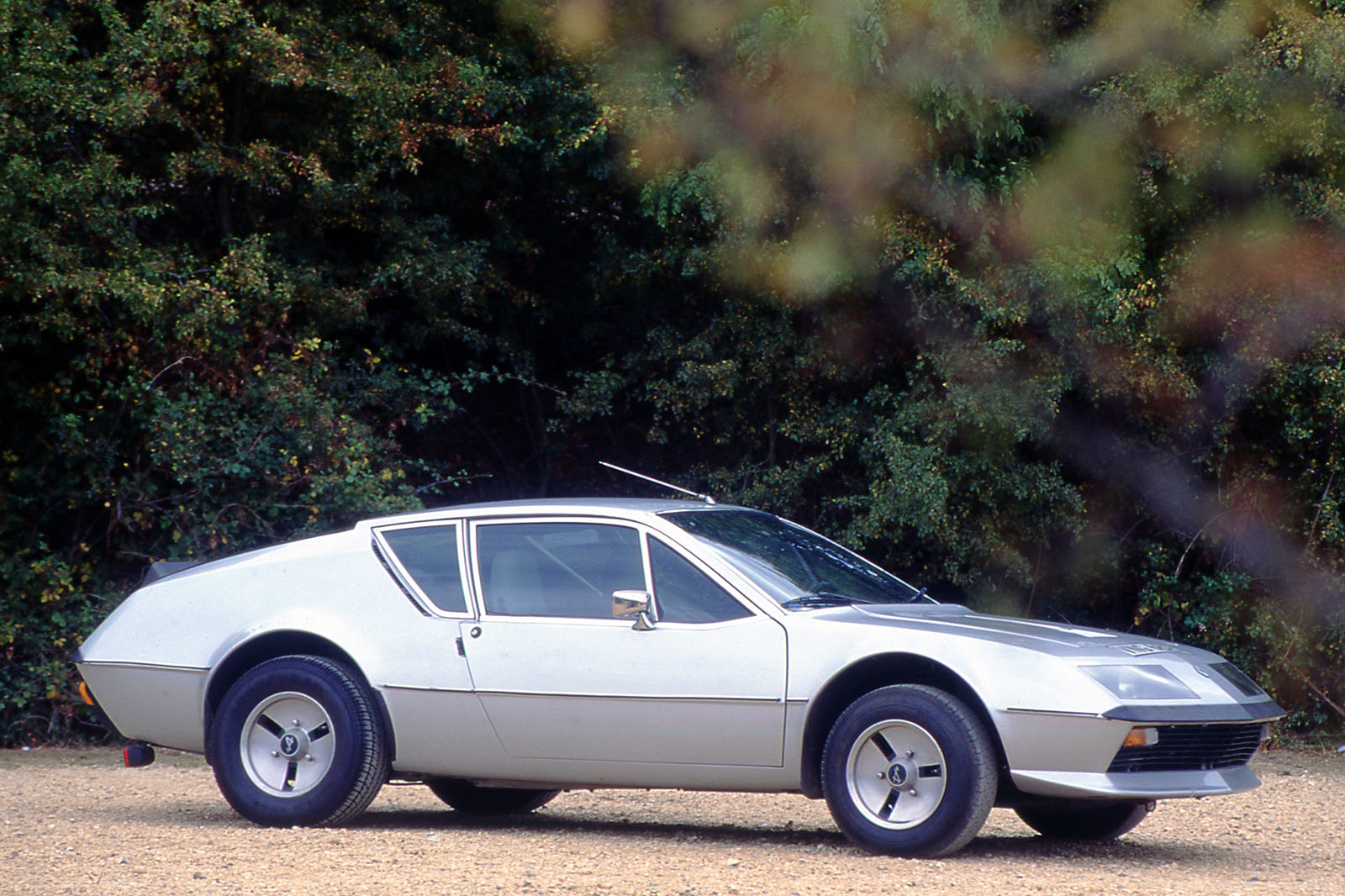 The A310 lived on, however, like its forbears evolving through a number of iterations and powertrains, taking on the rear end of the Renault 5 Turbo in 1981 and selling more than 11,600 units prior to be phased out in 1985, to make way for the Alpine GTA.

The GTA (Grand Tourisme Alpine) was notable for being the first European car to have its body formed by high-pressure injection. This technique enabled the polyester body to be ‘stuck’ to the chassis, thereby endowing the car with exceptional rigidity.

Initially powered by a 158bhp 2849cc engine, the GTA hit a top speed of more than 143mph. Later a turbo version had 196bhp and the GTA was celebrated as the fastest French car in production. Formula 1 fans also remember the track-only spin-off, the Europa Cup, which raced ahead of Grand Prix from 1985 to 1988 and a US version of the car with retractable headlights. Further evolutions included Mille Miles and Le Mans special editions, the latter featuring a V6 turbo engine.

The GTA-derived A610 was shown in 1990, but its faltering sales signified the struggles increasingly overwhelming Alpine. Ahead of its axing in 1995 just 818 units were sold and, while they are collectable today, at the time few mourned its passing. 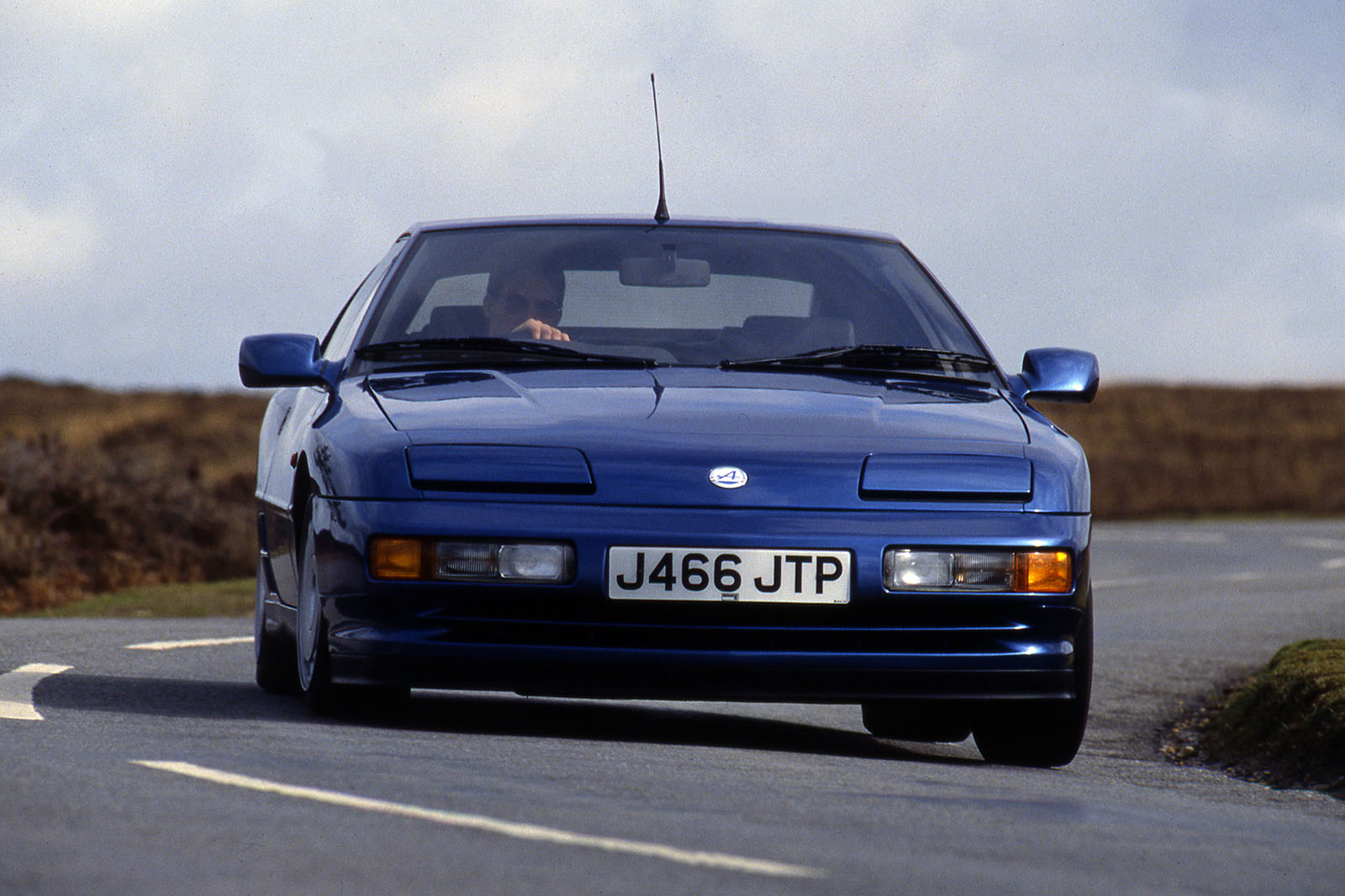 With this, the Alpine name petered out. Between 1989 and 1995 two abortive projects to launch the A710 hit the skids, despite reaching prototype stage on both occasions. The projected cost of 600m euros for meeting modern crash and safety standards was deemed too great and the projects cancelled. Rédéle himself died in 2007, aged 85, but his active participation in the company had long since ended.

Now the timing is right again, the project having been kickstarted hand-in-hand with Caterham but now completed entirely under the auspices of Renault ownership. While sales are expected to focus on France, the car will be sold around the world, with early predictions suggesting the sports car loving UK market - once unable to buy an Alpine-badged car direct - will be the third largest for the reborn Alpine.

I was continuously checking this blog and I'm impressed.I have bookmarked your blog.Thank you so much for sharing these information. For any kind of writing help refer my website.

How was this brand not more successful?

These cars are AWESOME!