BACK TO ALL NEWS
Currently reading: Could battery swapping replace EV charging?
UP NEXT
Lotus Emira vs Porsche 718 Cayman

Frank Skarpass, a manager at a Norwegian power grid company, is digesting the information that the structure resembling a high-tech carwash positioned next to the bank of chargers where he’s topping up his Jaguar I-Pace can swap EV batteries. “It only takes five minutes? That’s the dream,” he says. “Charging is without doubt a hassle.”

The battery swap station in Lier, southern Norway, is the first to be installed in Europe by Nio, a Chinese EV maker that has been compared to Tesla. The premise is simple, even if the mechanics aren’t. The swap station will replace a depleted EV battery for a full one in around five minutes.

Nio already runs 836 swap stations in China and plans to increase that to 1300 globally by the end of this year. Of those, 20 will be in Norway, and the company is lining up sites in Germany for its big launch there later this year.

When eventually it brings its range of premium-priced SUVs and saloons to the UK (we’ve been given plenty of hints but no date yet), it will install them here too. 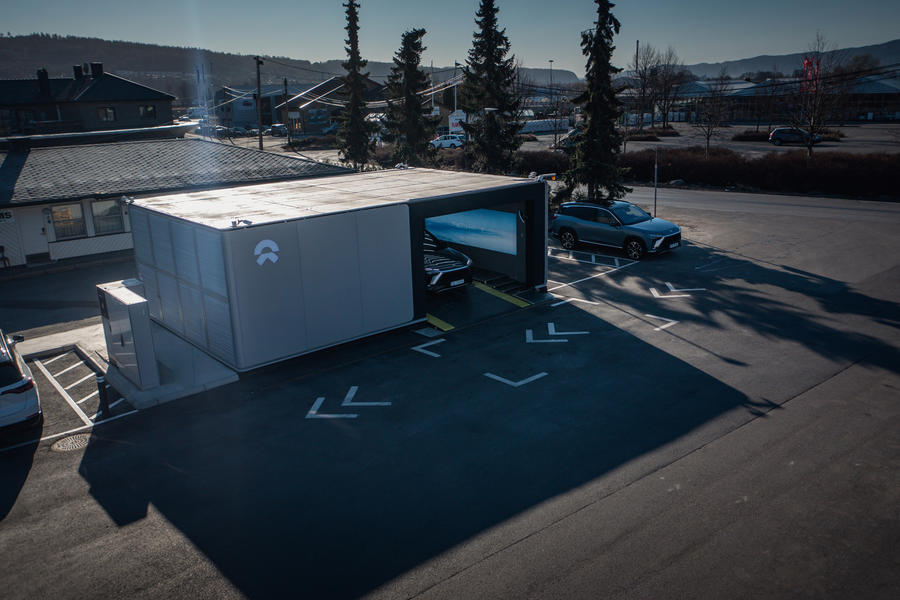 The idea of battery-swapping isn’t new. Tesla initially proposed the technology for its cars before settling on the Supercharger network. In Europe, Israeli company Better Place inked a deal with Renault in 2008 to use its swapping system in EVs, starting with the Fluence ZE saloon. Stations were built in Denmark and Israel, but the idea didn’t take off, and in 2013 Better Place filed for bankruptcy. 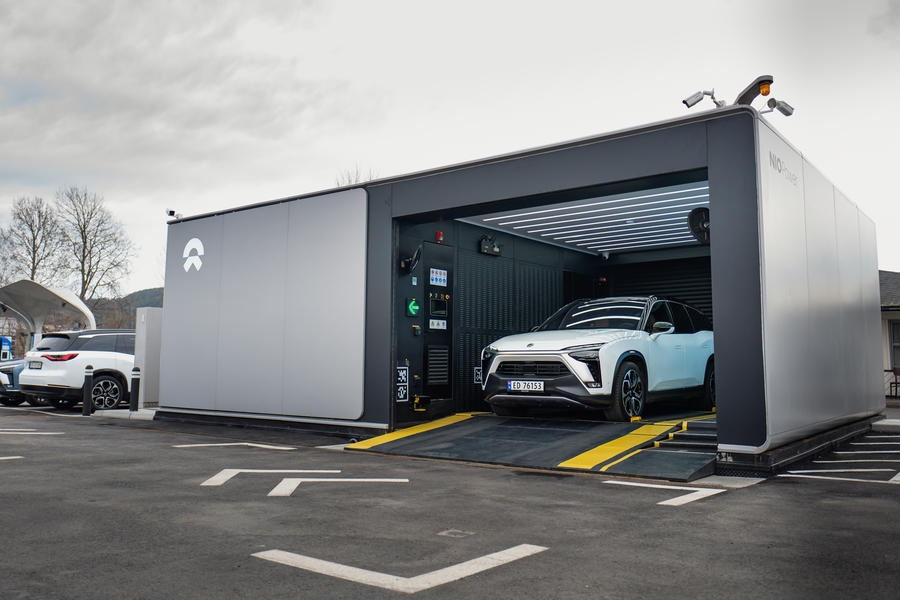 But while battery-swapping has been dormant in Europe, the technology is expanding at a rate in China. Nio now claims the capacity to make 30,000 swaps per day and is leading the private market, but others are looking to close the gap. Investing in the technology includes battery company CATL, which is launching a service called Evogo that claims swaps in under a minute and for which the FAW Group has said it will make a new MPV.

Also getting involved is Geely, the owner of Volvo and Lotus, which last year announced plans to roll out 5000 swap stations globally.

In China, the technology is used for taxis and even trucks. Of the 10,513 ‘new energy’ HGVs sold last year in China, 31% had battery-swap technology fitted, according to figures from Bloomberg NEF.

If you’re thinking battery swapping comes closest to the ease of refuelling, the global oil companies agree with you. Last year, BP signed a deal with Aulton New Energy to develop battery-swapping services, while many of Nio’s swap stations are located on the forecourts of Chinese oil giant Sinopec. In Europe, meanwhile, Nio signed an agreement in December with Shell to jointly construct swap stations in Europe and China. 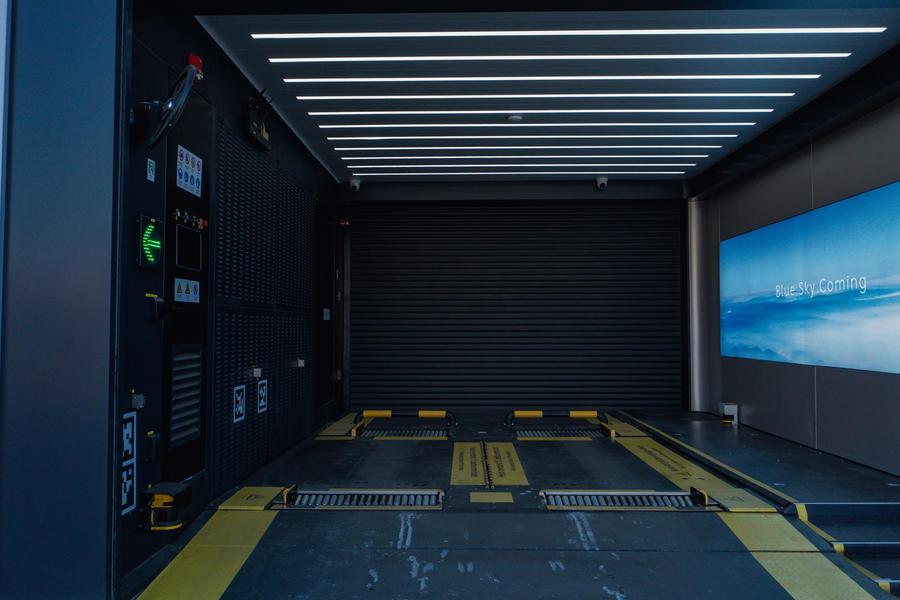 Not everyone is convinced. “I think we’re complicating it by changing battery parts,” Paul Philpott, CEO of Kia UK, told the audience at the SMMT Electrified event in March. “Charging times are going to come down,” he added, citing the already fast 18-minute time to get from 10% to 80% charge on the new Kia EV6. 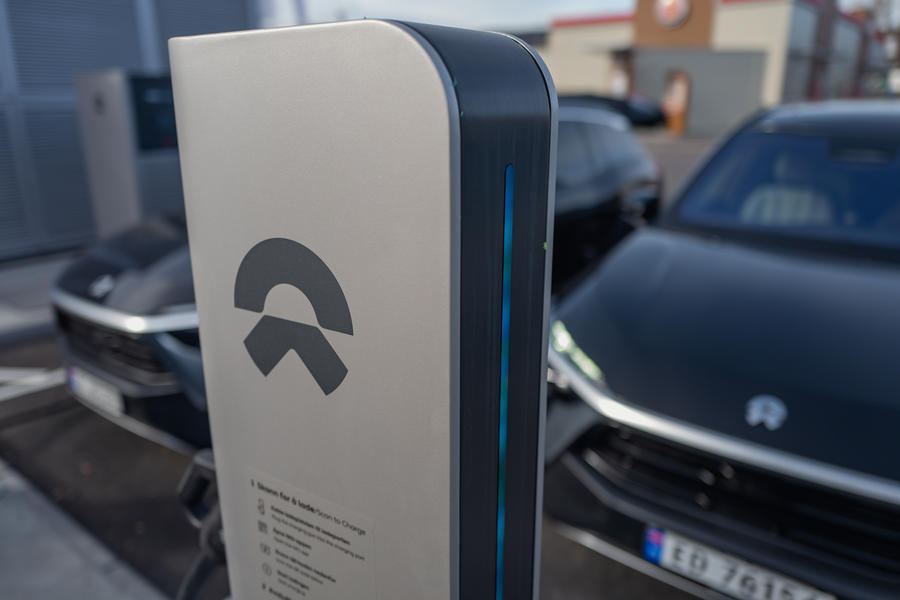 It’s certainly costly. A Swedish study published last year quoted Nio figures of $772,000 (£588,000) to build a swap station in China, including the batteries, site leasing etc, compared with $309,112 for a bank of chargers. 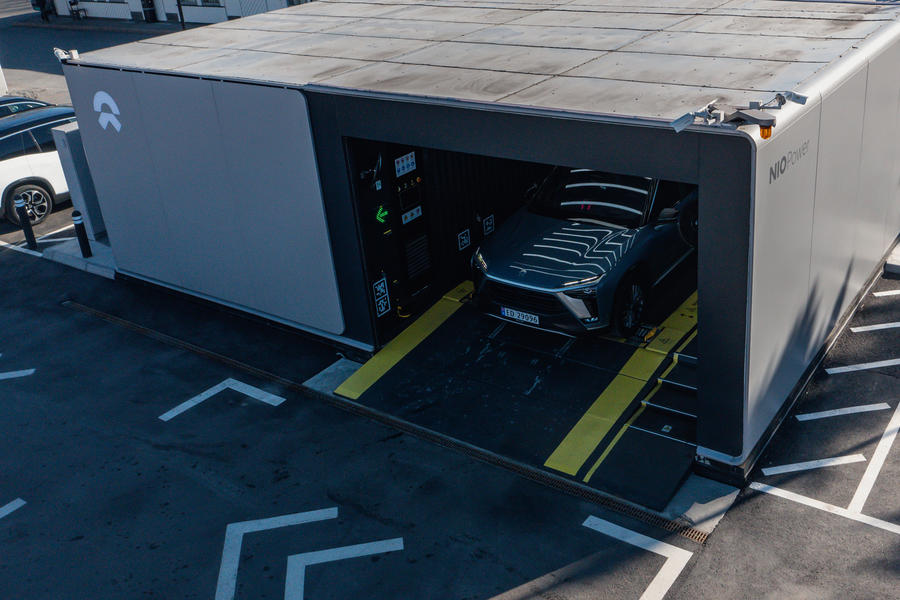 Nio needs to produce extra batteries to load the 13 slots in its current iteration of the station. Aulton New Energy’s third-generation station holds 28 batteries, requiring an even bigger capital cost.

In China, they get a helping hand. The government has cut subsidies for pricier EVs but kept them for Nio to accelerate the swapping technology.

“Geopolitics is playing a role here,” said Michael Dunne, head of Chinese-focused automotive consultancy ZoZoGo. “China's leaders make no secret of their ambitions to set global standards for new technologies directly challenging the US. And they openly support both Nio's and CATL’s ambitions to dominate this sector via subsidies and incentives to offset the sky-high up-front investments.” 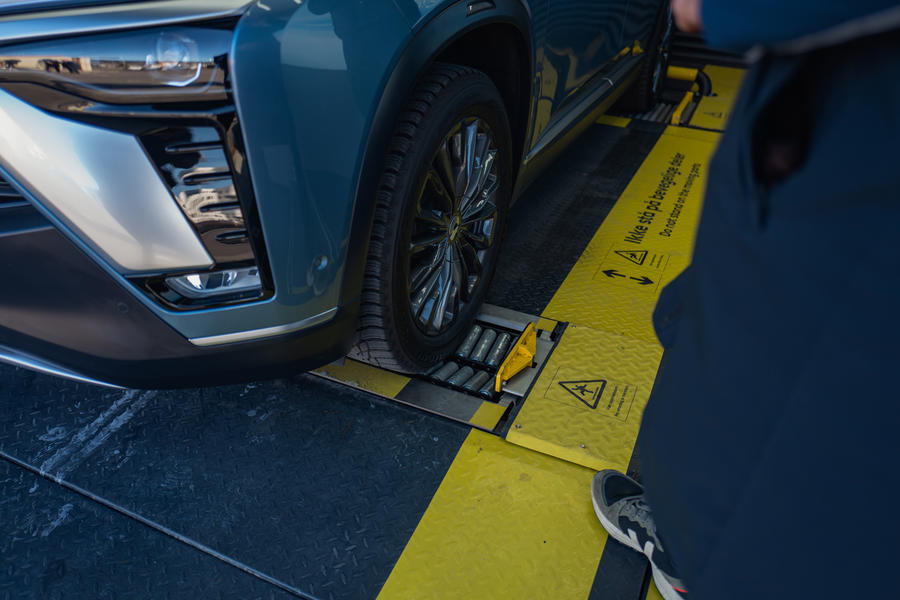 China is also very good at persuading its mainly state-owned car companies to collaborate on technology. Nio has a great selling point, maybe even better than Tesla’s hassle-free Supercharger network, but it probably needs to persuade another company to buy its platform to increase throughput at swapping stations to boost revenue. That’s unlikely to be a European company, although it’s easy to picture a link-up with Geely brands on future cars such as upmarket Lotus SUVs.

Skarpass suggests another customer: his beloved Jaguar brand. Battery swapping wouldn’t be enough to persuade him to buy a Nio. “It doesn’t have the right badge, but the concept is good. If Jaguar adopted the system, I would definitely switch,” he says.

Who owns the battery?To use Nio’s battery-swapping system, owners need to lease the battery from the equivalent of £175 a month for the 100kWh battery in Norway (90kWh usable from swap stations). That cuts the cost of the car by the equivalent of around £7500 and gives you two free swaps per month. The cheaper option is the forthcoming 75kWh battery, which can be swapped in with no changes, or there’s a 150kWh version in the pipeline that will fit newer models such as the ET7 saloon, a Mercedes-Benz EQS rival. That would be useful if you're planning a holiday.

How does it work?In Norway, you navigate to the station via the car’s sat-nav, which automatically books you in when you get close. Park in the marked rectangle, press an icon on the infotainment touchscreen and the car autonomously backs in. Rollers further line up the car, magnets prevent movement and jacks elevate it just enough to take weight off the suspension. Electric extractors remove 10 bolts holding the battery in place and a separate jack removes the pack, which also forms the underside of the car. A fresh battery is extracted from the ‘hotel’ where it has been sitting charging at a maximum rate of 60kW and preconditioned. The new pack is fitted, the car is checked for new firmware downloads, the screens come back to life and you can drive away.

The price per swap currently is 100 krona (£8.70) after you’ve used your two monthly free swaps.

We clocked the whole process at 5min 57sec from the moment we pressed ‘go’ on the screen. At no point did we have to leave the car, so it goes one better than a petrol station. 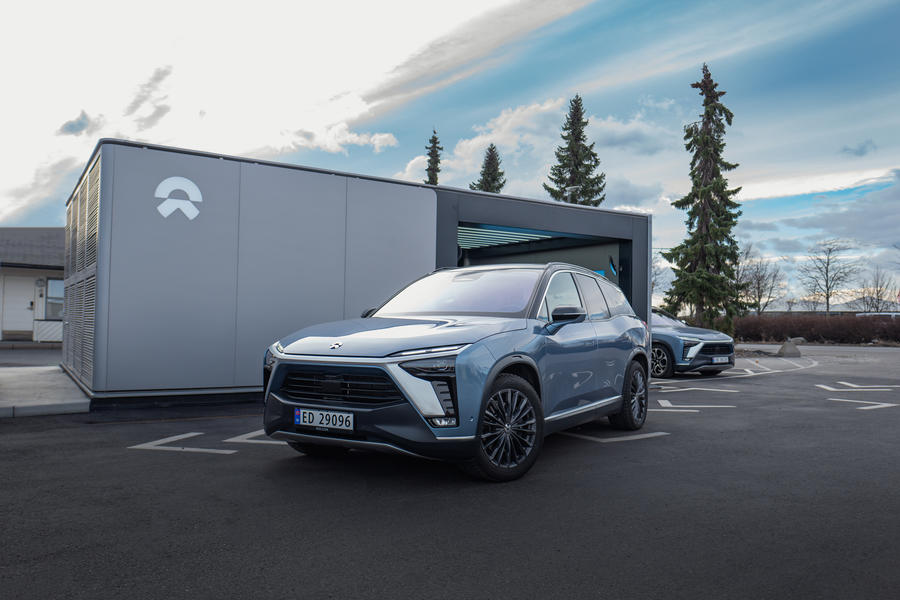 So many electric cars, so many different batteries? Best to have a modular system with sort of a base-size battery.

martin_66 4 April 2022
Absolutely brilliant idea, and ultimately not that expensive for the private motorist. We just have to hope the manufacturers have deep enough pockets and are prepared to dip into them to get these places up and running.
close