Audi will expand its urban fast-charging hub concept to 13 more sites in the next three years, following the success of a pilot project – and hasn’t ruled out a larger international expansion, potentially including the UK, in the longer-term.

The firm opened the first semi-permanent site, which features six 320kW fast chargers and a lounge, in Nuremberg, Germany last December. The hub draws power from the local grid and roof-mounted solar panels, with the energy then stored in ‘power cubes’ that contain second-life batteries taken from electric Audi test cars and offer around 2.45mWh of storage.

The six charge points can be reserved for 45-minute slots – secured via a barrier that is lowered on entering a code on arrival into the Audi app – and the 200 square metre lounge features toilets, vending machines, a bookable meeting room and a terrace.

Ewald Kreml, who leads strategy for the charging hub, said that it had been developed to offer “a premium experience” for high-powered charging in suburban areas, and was aimed at the 60% of urban EV buyers with no access to home charging. The Nuremberg location, close to a park and convention centre, was chosen because it is between residential areas and the city centre.

“Our research shows that the biggest reason people are reluctant to switch to EVs is a lack of public charging points, and that a frustration of EV drivers is having to queue to charge at peak times,” said Kreml.

“There are queues at chargers that have a utilisation rate as low as 15%, so allowing people to reserve helps spread that demand.” 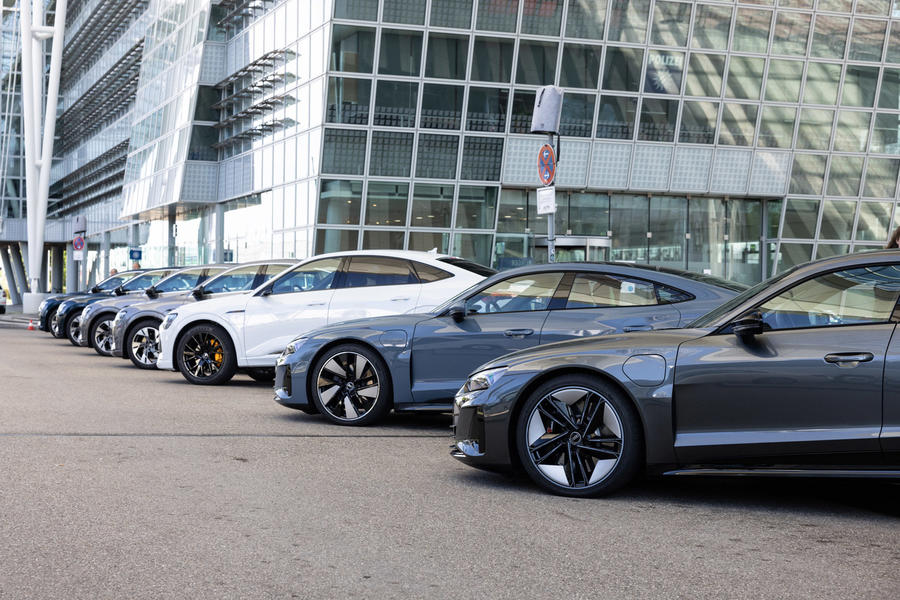 Since the site opened in December, more than 3600 charges have been made, an average of 24 a day, while more than 5400 visitors have used the lounge. In total, 54 vehicles were charged on the busiest day and Kreml said the site could cope with 80. The site is open to all EVs, although Audi drivers – who get exclusive access to the lounge – account for around half of visits.

Notably, more than 60% of customers who use the site visit more than once a week, which Kreml said has validated the concept of offering fast-charging in suburban areas – and prompted Audi to expand the project.

The site features variable pricing, depending on what charging contract a driver has. Audi drivers with the right package will pay around 26p/kWh, rising to 59p/kWh on a pay-as-you-go contract.

A second site will open in Zurich, Switzerland in the coming months, although limited space means it will only offer four charging points. Audi will also work with partners at that site to offer extra services. Two further sites in Berlin, Germany and Salzburg, Austria, will follow later this year, with three additional sites at yet-to-be-determined locations in German opening in 2023, before a planned eight new sites in 2024.

Kreml said: “The site locations aren’t fixed yet, and we’re looking at options. Finding the right location for the sites is key: we need them near main traffic routes, and in urban locations that are near residential areas but not in the heart of the city centre.”

He added that Audi could look to more international locations beyond 2024. “We think it’s a concept that’s definitely applicable to other countries. The idea of the trials is to generate know-how, and then we’ll look at the business case before taking further decisions.”

Kreml said that the relatively slow rollout is largely due to the availability of second-life batteries: those in the Nuremberg and Zurich sites will come from retired Audi test vehicles, and it could be years before the firm starts to receive customer batteries. The Nuremberg test site features second-life batteries taken from 26 EVs – and can accept batteries from both the e-tron and the MEB-platformed Q4 e-tron.

Because of the large capacity of the batteries, the Nuremberg charging hub only needs a standard 200kW low-voltage connection, which Kreml said allows it to be installed in a location quickly, with limited planning permission and with minimal groundworks.

The modular infrastructure, which was first developed as a mobile charging solution when Audi was developing the E-tron, houses the second-life batteries and required control systems in four 10ft shipping containers. The first-floor lounge was then delivered pre-fabricated and mounted on top, which also provides a canopy for the charge points.

Audi also paved the area around the unit, and the thick cables are held in place by a swivel arm to keep them off the ground. For the Zurich hub, the firm will rework those cables to extend their reach, and introduce a height adjustment for the charger control systems to aid disabled drivers.

This can't be the future, sorry. I've no desire to spend my time in an Audi lounge drinking vending machine coffee while waiting for my car to charge.

Or, they could have done a Tesla and built 78 supercharging locations in the UK already, and I believe about 800 actual chargers. Others are so far behind it's ridiculous. Tesla built them before they'd sold that many cars too. Audi, etc sells tens, if not hundreds of thousands in the UK annually yet won't invest in a suitable network.

A great pity Tesla have opened some to non-Tesla cars. If owners start to have to queue it'll be a monumental mistake for the brand. If they make money and invest in more chargers then perhaps it'll be worth it.