BACK TO ALL NEWS
Currently reading: Autocar Awards 2022: Cupra Formentor voted best all-rounder
UP NEXT
New 2023 Audi A4 Avant undergoes tests in the Alps

What better car to give our Best All-Rounder award to than one that’s in about four segments at once and somehow manages to be a compelling option in all of them?

At first glance, the Cupra Formentor is a crossover in the mould of the Toyota C-HR and Volkswagen T-Roc. With that come butch looks, relatively generous interior space and a slightly raised ride height to aid loading children or luggage.

However, it equally appeals to SUV sceptics. Look closely and it’s more of a tall estate than a tall hatchback. Step inside and you can drop the seat all the way to the floor for maximum touring car vibes or jack it up if you prefer a lofty driving position.

So the Spaniard ticks the hatchback, estate and SUV boxes and, thanks to its long bonnet and sloping roofline, perhaps even the coupé one too.

It also has the unenviable task of defining what Cupra as a stand-alone brand stands for. It’s the first Cupra that isn’t a performance version of a Seat, so there’s a pair of plug-in hybrids that appeal to the company car market as well as a range of cooking petrol-only versions.

Our favourite model is the current range-topper, which takes its 306bhp petrol engine and four-wheel drive system from the previous-generation Volkswagen Golf R. Like that car, it’s as competent on the school run as it is on a moorland road.

There are hot hatchbacks and even hot crossovers that entertain more intensely, but the Formentor 2.0 TSI provides secure, all-weather competence that’s straight out of the hot-hatch handbook. 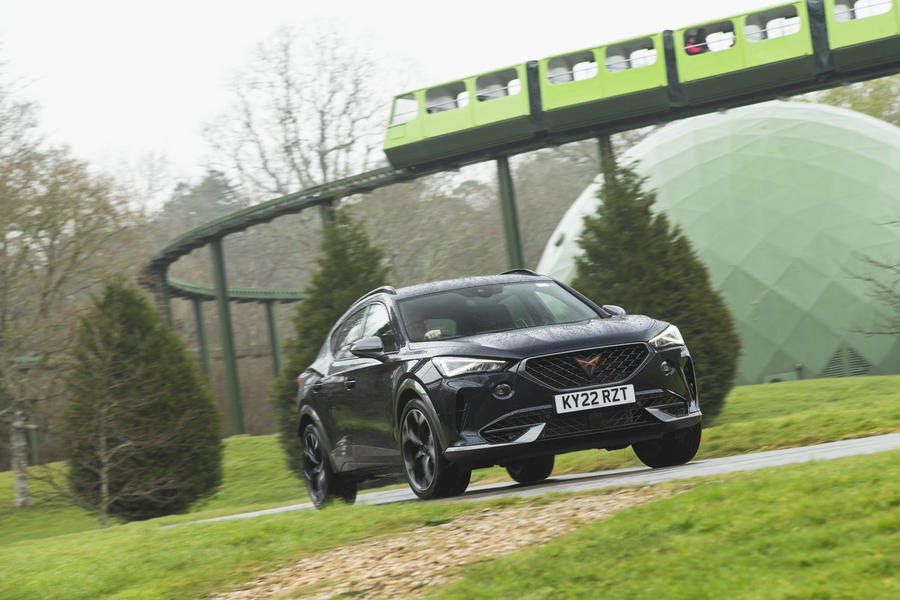 If that’s still not enough, the forthcoming Formentor VZ5 will inherit Audi’s magnificent turbocharged five-cylinder engine for those who thought 306bhp isn’t quite enough firepower. That should also fix one of our few gripes with the 2.0 TSI version, which is the lack of a rich engine note.

What all Formentors share is that they impress with a hint more dynamism than you will find in most crossovers.

Even more important for Cupra’s aspirations as a premium brand is that the interior, despite its minimalist style, has a material richness you wouldn’t find in a car from any of the other Volkswagen Group brands, short of Audi.

In short, the Formentor ticks more boxes than any other car on sale - SUV, coupe, estate, hot hatch, BIK-tax-busting PHEV and compact premium car – and does so for considerably less money than the opposition from Audi, BMW, Land Rover and Mercedes-Benz. It’s a consummate all-rounder.