BACK TO ALL NEWS
Currently reading: Throwback Thursday 1895: Britain's first public demonstration of cars
UP NEXT
Fisker goes radical with Pear EV SUV

Two of the UK's motoring pioneers exhibited to 5000 spectators their 3.5hp Daimler-engined horseless carriages at a showground in Kent
Open gallery
Close

At the time, many would have seen it as a novelty, but it was, in fact, an extremely notable event in the history of motoring.

It was Tuesday, 15 October 1895, the day of the Horseless Carriage Exhibition at the agricultural showground in Tunbridge Wells, Kent — the first organised public demonstration of cars.

The event drew "quite five thousand people", many of them paying a shilling (equal to about £6.25 today) to sit in a grandstand. It was organised by the town's mayor, Sir David Salomons, with help from automotive entrepreneur Frederick Simms.

Salomons was a prominent scientist and trained barrister who held many notable public offices, but his passion was in electricity. He registered many patents over the years, including one of the first electric cooking devices; his house was one of the first to have electric lighting and he became chairman of a company that played a key role in electrifying London.

But aside from that — and horology, photography, astronomy, microscopy, civil engineering and mechanicals, of course — Salomons was passionate about horseless carriages and frequently contributed his writings about them to the fledgling Autocar. He had actually designed and built his own electric car, way back in 1874, but abandoned the project because he could not find a way to properly recharge the batteries.

In 1895, he became only the second person to import a car, taking delivery of the two-cylinder, 3.5hp Daimler-engined Peugeot 'vis-à-vis' that he would later display in Tunbridge Wells.

This appeared at the show alongside the very first to be imported: a Panhard-Levassor, also with 3.5hp Daimler power, owned by the Honourable Evelyn Ellis, director of The Great Horseless Carriage Company.

Ellis had ordered the car to his own specification in left-hand drive (French cars were right-hand drive); it had been driven from the Paris factory to Le Havre, shipped to Southampton and taken by train to Micheldever, from where he illegally drove it 56 miles to his home in Datchet, at an average speed of 10mph.

Three other vehicles appeared in Tunbridge Wells: a petrol-powered tricycle and a steam horse, courtesy of France's De Dion-Bouton company (the latter dismissed as "really only a greatly improved form of traction engine") and Ellis's Daimler-engined fire engine "for a country house". 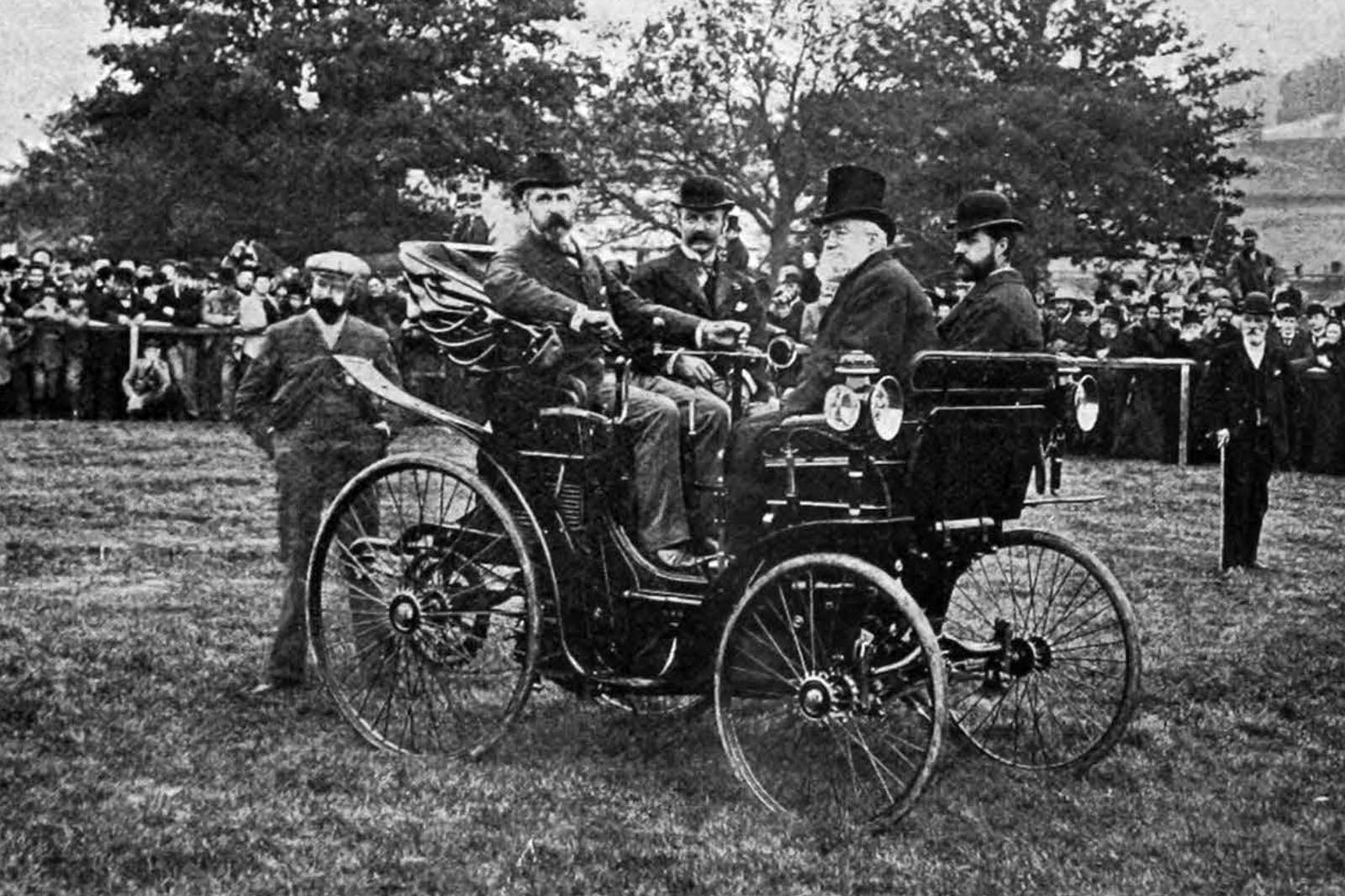 Autocar reported on the trial: "When the day arrives, when for many purposes a horsed vehicle will look as quaint as did the horseless chariots seen by us a fortnight since, this exhibitive trial will rank for this class of vehicle very much on an equality with that memorable trial of locomotives, in which the famous old Rocket so completely defeated the engines opposed to it at Rainhill just 66 years ago."

Unfortunately, the conditions at the agricultural ground were "hardly fair", we reported, given that the vehicles were required to travel over "rough, soft turf", a surface that "especially militated against the tricycle", but all nevertheless "exhibited very remarkable speed capacity". Top speed for the Peugeot was said to be 15mph.

Autocar elaborated: "Sir David, who was much cheered as he passed, stopped from time to time and gave short descriptions of his own vehicle.

"The carriage takes the form of a Victoria body with a seat for two in front; the back seat, also accommodating two passengers, is raised considerably above that facing it, in order that the directeur may have a good view ahead.

"His starting and stopping lever, and his speed variation lever, is placed close to him on the right, and a foot lever is conveniently fitted for the purpose of throwing the engine out of gear, and for actuating the brake on the shaft that carries the gearing. A lever brake is also fitted, which has several actions; it throws the engine out of gear, brakes the gear shaft, and both driving wheels.

"The engine etc is all neatly packed away under the back seat and, except for the driving chain running naked at one side, there is no indication of machinery in connection with the vehicle, except the slight noise and smell of warm spirit as it passes, and the somewhat serious vibration when the carriage is stopped.

"The steering is done by a bicycle handle-bar in front of the directeur, which actuates the front pair of wheels, which run free of each other on a fixed axle. The axle of the rear driving wheels is fitted with a differential gear to allow of independent rotation when turning. 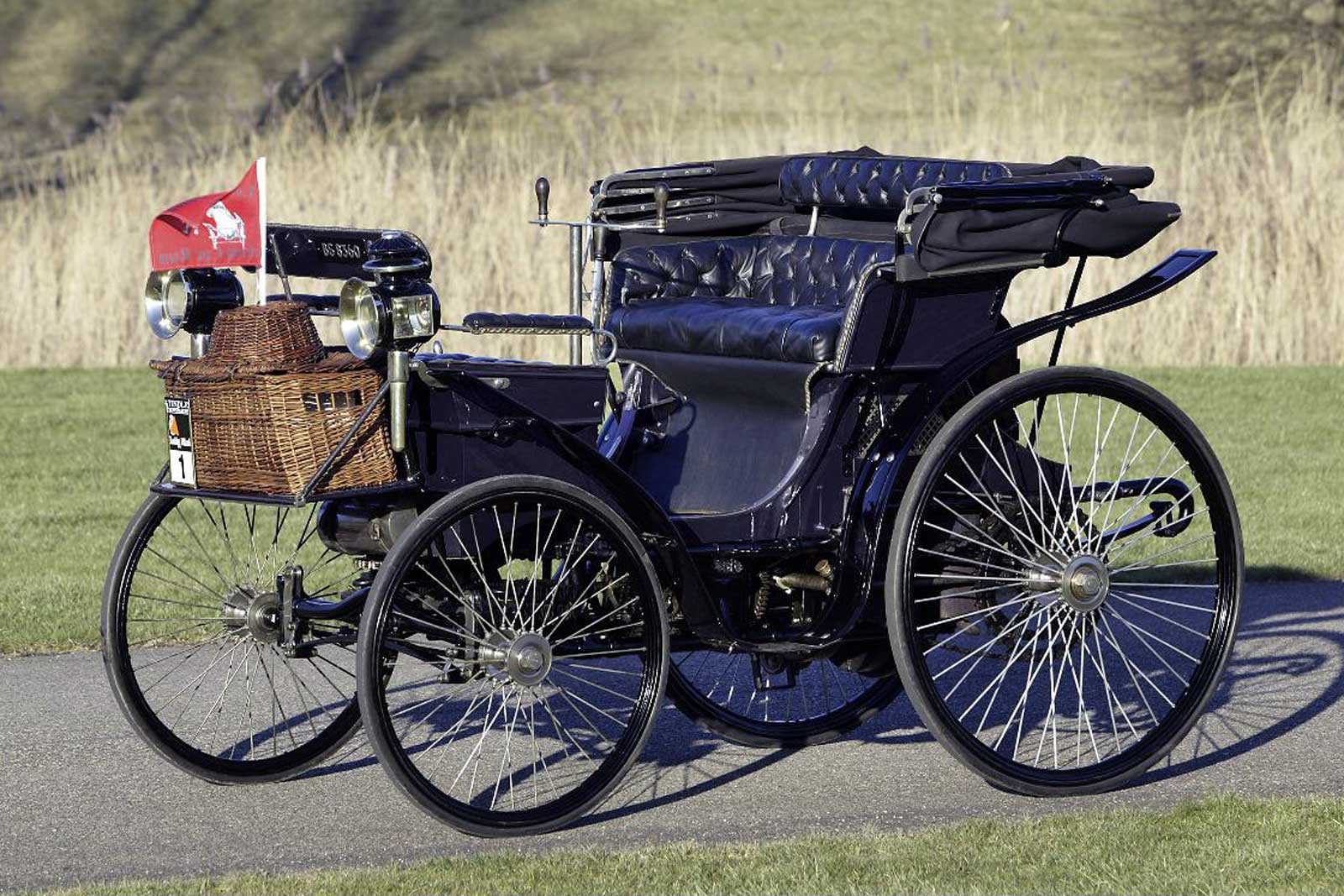 We continued: "The petroleum reservoir is well removed from the motor, being formed under the front seat, from which it is pumped by a small pump into a smaller vessel which supplies the fuel for the two burners which keep the small platinum ignition tubes at a red heat. This having been done, a pump-like syringe is attached to the small tank, and, all tubes having been closed, is worked until the pressure reached a certain point indicated by the gauge, then a little spirits of wine [alcohol] is poured on the cups, one of which surrounds each burner.

"This, when lighted, heats the burner, and in two minutes the valves may opened and the burners lighted. Very quickly the ignition tubes are red-hot, and the engine is ready to start. The engine is started, and the driving gear thrown into gear after the directeur has taken his seat.

"To stop the vehicle the gear is thrown out and, though the vehicle stops the engine rattles on as though it had not another moment to live, and cause so much noise and vibration that one is heard with difficulty, while the vehicle appears seized with a species of Brobdingnagian ague.

"This, we're were informed, is to be averted in future by the fitting of a hand-brake."

The vehicle shown by the Ellis was much the same, except "its body took the form of a wagonette with seating accommodation for four".

Both cars "mounted the hill in the showground, which has a gradient of about one in forty, in excellent form", Autocar wrote delightedly. 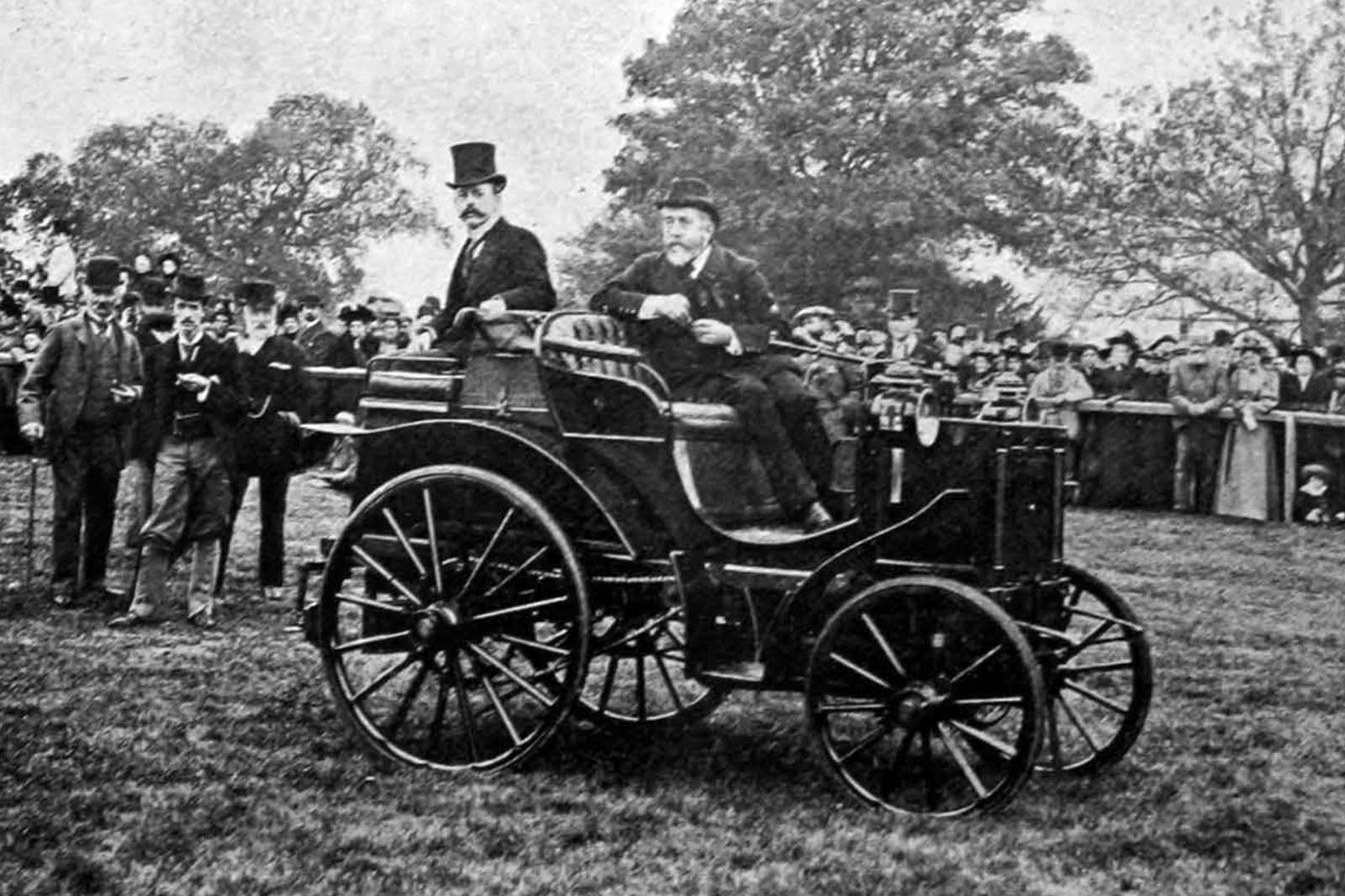 However, Salomons was keen to properly demonstrate the ability of the cars. He thus "steeled himself to dare the majesty of the law… for the carriages left the ring and came out upon the excellently laid highway which stretches between the showground and the town".

We continued: "Directly the wheels of the automobiles revolved upon the surface of the high road, the serious handicap imposed upon their movement of propulsion by the rough turf of the ring was plainly apparent.

"Moreover, the experiment must at once have laid the ghost of all fear with regard to danger to pedestrians or fright to horses. The roadway was lined with spectators, and horses and carriages were stationed at very frequent intervals. The motor vehicles were shown to be under perfect control, and no one of the horses so much as lifted an eye as the horseless carriages sped somewhat noisily by."

Had Salomons' efforts won over the wide-eyed public to the benefit of allowing cars on the road? It seemed to have gone a long way towards doing so.

"At the close of the proceedings, it was felt by all present that the occasion undoubtedly heralded the dawn of a new era in vehicular propulsion on the high roads of this country, " Autocar said, "and that for manifold purposes the horse would shortly be reckoned de trop.

"The whole of this undertaking to make something like a reasonable start in demonstrating the entire practicability of motor-driven carriages arose with, and its expenses were defrayed by Salomons, to whom the thanks of the community at large, to say nothing of those of over-worked equines, are certainly due. Changes are rapid in these days, and the hour of the motor-driven road vehicle is close at hand."

Indeed, 13 months later, Parliament approved the raising of the speed limit from 4mph (2mph in towns) to 12mph and the removal of the requirement for a pedestrian to precede the car waving a red flag.

Ellis played a key role in achieving this landmark, having demonstrated his car around the UK, including giving a ride to the future King Edward VII, during which he became perhaps the first of millions to exclaim: "Don't drive so fast, I'm frightened!"

I think I'll pop round to my local Peugeot dealer and ask if they've got a brake lever in stock for a 3.5 hp vis-a-vis.