BACK TO ALL OPINION BLOGS
Currently reading: Porsche Cayman GT4 - have you heard? It's really rather good
UP NEXT
Opinion: How I weep for the death of the combustion engine

Porsche Cayman GT4 - have you heard? It's really rather good

Let me begin with an apology: sorry. I know you’ve heard about how great the Cayman GT4 is a million times before, but if you can bear it, or have somehow missed all previous episodes, here is the million-and-first recount of its brilliance.

It’s born of the fact that I was feeling cheated; every time the GT4 had made an appearance at the office, I’d somehow missed the opportunity to have a go. So, while speaking to one of the nice chaps at Porsche, I got out the violin and played a sorrowful tune, something along the lines of: "I was robbed."

If anyone ever tells you that whinging and whining doesn’t work, they’re wrong, because last week a bright yellow GT4 pitched up in the car park. Not being a violent man, I pushed and elbowed everyone out of the way, grabbed the keys and shot off for the weekend, deciding to deal with the fallout, and HR, on Monday.

Saturday was cold and very wet, and the Michelin Pilot Cup Sport 2 tyres seemed well outside their operating window. All the GT4 wanted to do was understeer, and if I tried to correct that with a dab of throttle it turned into catastrophic understeer, or cataclysmic oversteer.

I knew it was the tyres, but there was a bit of me questioning what all the fuss had been about. What we had here was a Cayman with a ridiculous wing that was not far off undriveable.

Waking up on Sunday to sunlight streaming through the curtains, I decided to have another crack. I went for a blast, giving it some beans after making a concerted effort to get some heat into those tyres on the now thankfully dry road. Oh God, what a difference a day makes.

This was the GT4 I had heard about, and it was coming alive on every sensory level. The tactile Alcantara steering wheel was loading up in my hands as I guided the pointy front end between apexes, and now the Michelins were digging in, offering the grip I’d longed for a day before.

At the point when the front tyres could do no more, there was a newfound progression to how they let go, and I could compensate by bringing the rear around without disastrous consequences. In fact, using the tightness of the GT4's rear diff and the deftness of its throttle pedal, even I – whose car control is along the same lines as Animal’s drum playing in the Muppets - was confidently maintaining a few degrees of rear slip angle while hammering hard out of corners.

Every time I managed to hook it all up and fire it out of a bend, just teetering on the edge of adhesion, the thrill was immense - and boy did I feel like a proper hero. If you think cars with tea-tray spoilers and low splitters make no sense on our congested, camera-splattered roads, think again: the GT4 is a car that'll make you smile even at sensible speeds. Well, sensible-ish.

But its spectrum of talents encompasses more than just a perfect helm and playful rear. It feels compact, like old 911s did until the demise of the 993, so you can enjoy it even on narrow roads. The stubby gearlever snicks though its gate with ease, while the pedals are set just so to heel and toe, and their blissful partnership reminds you why manual is best. And the GT3-spec carbon-ceramic brakes offer huge bite, with enough sensitivity to feel the onset of a locking wheel, so you can modulate your pedal effort accordingly. 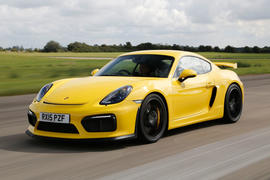 The GT4 is visceral and raw in other ways, too.  Driving along, you hear all these wonderful sounds buzzing around the cabin, connecting you to the car and to the moment: the pitter-patter of stones pinging off the chassis floor; whines from the engine’s drive belts; clicks and clacks from the gearbox and shift linkage; and those carbon-ceramic discs whirring away as you come to a halt. With all this going on around me and sitting almost on the floor in the low, carbonfibre-framed bucket seats, in my simple mind it morphed from a road-going Cayman into a full-on, stripped-out racer.

Of course, the real noise-maker here is the flat six. Yes, I know it’s missing a Mezger motorsport pedigree. But the 3.8-litre unit is still enchanting and a testament to natural aspiration. It goads you into ringing its neck to release that sweet spot of power between 4500rpm and 8000rpm, and as you head towards the red line, every increase in revs feels like another movement in a glorious motoring symphony. Needless to say, in temperatures barely above zero, I had the window ajar at all times, sampling every single note.

So there you have it; I wish I could be contrary and say something alarming, like: "Oh, that GT4 thing? It's utter rubbish." But I can’t; it’s just as brilliant as everyone says, and now I'm as devoted to it as the next man. I can't even say it was a chore when I wanted to switch off and relax, for two reasons: first, you never want to switch off in the GT4; and second, it rides pretty well all things considered.

On Saturday morning I still believed that the GTS was all the Cayman you could ever really need. Just two days later I am utterly convinced it's not, and that the GT4 is probably the best car in the world. Saint Augustine is quoted as saying: "He that is jealous is not in love." Tosh, I'm sorry your saintliness, I beg to differ. If you are one of the lucky ones to have a GT4 on order, or better still, in your garage right now, yes, I admit it: I am jealous of you. But that's only because I am totally and utterly in love with your car.

Feel free to borrow mine

Feel free to borrow mine anytime. Ha! I wish.