BACK TO ALL OPINION BLOGS
Currently reading: Why Ruf's old guard appeals as much as ever
UP NEXT
Opinion: Esteban Ocon is a dark horse for the 2021 F1 season

Why Ruf's old guard appeals as much as ever

We've recently reviewed the firm's 700bhp CTR, but at half the price, the evergreen RCT is arguably even sweeter
Share
Open gallery
Close
Share story

Ruf's CTR Anniversary, which we recently sampled to delirious effect, is unforgettable, but the most popular model ever to leave Pfaffenhausen is the 964-based RCT (for ‘Ruf Carrera Turbo’).

Conceived in the early 1990s with more horsepower than the contemporary Porsche 911 Turbo, it existed in both rear- and four-wheel-drive forms and used one of Ruf’s single-turbo air-cooled 3.6-litre motors. Ruf also rebuilt the six-speed manual gearbox, installed its own limited-slip differential and upgraded the suspension.

Then, in the middle of the decade, the RCT Evo was launched, using the 993-generation 911’s ECU system to bring the car’s output from 370bhp to 425bhp, reduce turbo lag and smooth out the power delivery.

The wonderful thing is that, alongside the CTR and the soon-to-arrive 992-gen 911 conversions, Ruf will still build you a pristine RCT Evo if you can supply an old 964-gen 911 (and because the body is comprehensively revitalised, almost any 964 will do).

He or she had yet to take delivery, but one glance at the diminutive, bullet-like silver form and cabin upholstered in soft pastel-green leather, with houndstooth for the buckets, and it’s difficult to imagine they’d have second thoughts. Though subtle, the thing oozed with desirability. 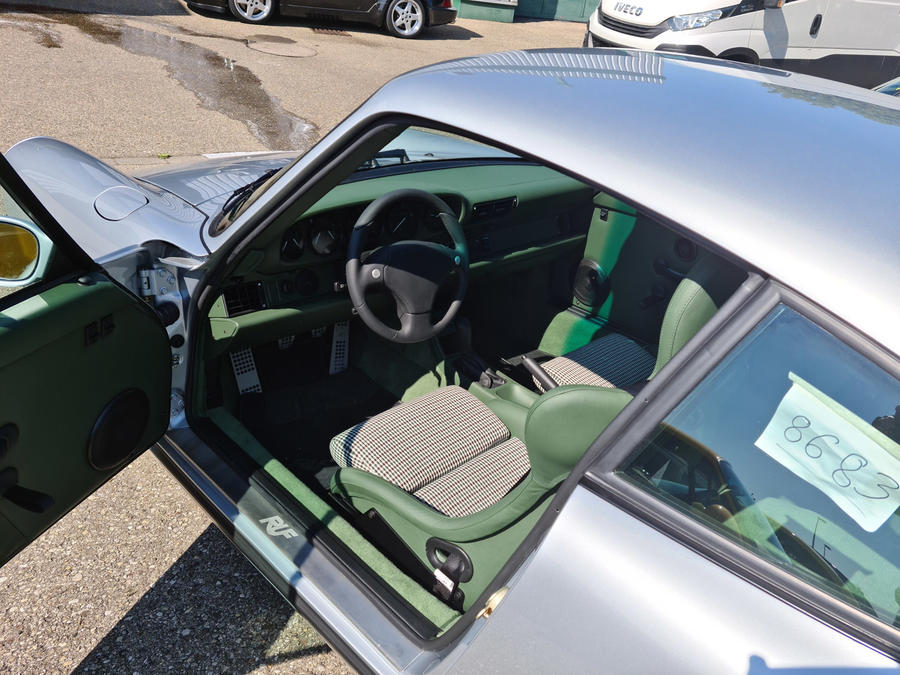 On the move, the RCT’s character then exists in complete contrast to that of the CTR.

For one thing, it drives like a classic, albeit an exceptionally well-sorted one, with the rich sense of connection but none of the creaks or groans or mechanical ambiguity. It feels utterly authentic but dependable – a restomod that's perfectly balances the 'resto' and the 'mod'.

Unsurprisingly, the car isn't housefly agile, so you need to establish a flow and in general the dynamic character is very much GT, although it’s still throttle adjustable and handles like an old-school 911. There’s an enjoyable softness here, the rearward balance is unmistakable, the pedals are offset, and you get bump-steer, the nose hopping on less than glass-smooth roads. It's all so involving, but well-mannered enough to tour in – genuinely.

What really sets the RCT Evo off is the life in the steering, the indelible ker-plunk of the short-shift-equipped transmission, and the engine, which isn’t especially memorable at the 6800rpm redline but is juicily torque rich and just astonishingly linear on the way up to that point.

Log in or register to post comments
WallMeerkat 19 February 2021
Video gamers of the 90s-2000s are familiar with Ruf as the Porsche alternative in racing games when that company had a licence agreement with EA. Probably more publicity than they could ever have gotten from advertising
MarkII 19 February 2021
Ruf make some fantastic cars but for the same money, I'd be tempted to buy a 993 based Kaege Retro.
Peter Cavellini 18 February 2021

Maybe as a fourth car? So everyone needs a Range Rover of some sort. And an A6 Avant or Merc eqjuivalent. Not a BMW obviously - simply too vulgar in their new clothes. Then something to catch the sun in - Boxster. Mini Convertable, Corvette? Only then would you even think of a toy like this. At that point why not? OK it's going to lose £100k+  as soon as you sign the cheque but so's your new McLaren, Aston, whatever. Ferrari used to offer protection if you were prepared to keep them 12-15 years but with ICE being history in that period all bets are off. I'd far rather take my mistress to Paris for the weekend in one of these than in any of the above.