BACK TO ALL OPINION BLOGS
Currently reading: Two-door wonders to raise a smile
UP NEXT
Could used be better than new for KTM’s freak four-wheeler?

Two-door wonders to raise a smile

With £3500 to spend on a coupé, the used car world is your oyster. Here are some of my favourites
Share
Close
Share story

A question I am often asked is this: “What is going on in the used car market right now?” And the honest answer is that I haven’t the faintest idea.

It just depends what you’re after, how much you want to spend and whether you have a thing about German or Japanese cars.

You see, there are so many factors involved that it’s hardly worth speculating on what is or isn’t going on. If you’re a fleet manager or a car dealer, maybe you need some guidance, but none of that marketplace nonsense matters to the rest of us. We just want a car we can afford and which lights our fire.

With £3500 to spend and a coupé on the shopping list, you can have an immense amount of fun. A 2002 BMW 330Ci Sport may not be an M3, but it isn’t far off. It also has lower running costs and fewer maintenance issues, so it more than makes up for the lack of an M badge. It can’t depreciate much more, either, can it? Then again, some might want the security of four-wheel drive, so a same-year Audi TT quattro with a ‘225’ 1.8T motor is also within budget.

Alternatively, you could go a bit weird and bag a Peugeot 407 Coupé 2.2 Sport. It will be from 2007, but what you’ll get is a huge car with leather and loads of kit. It’s more modern than the German stuff but less interesting. Or more interesting, depending on your point of view. I also found a Honda Integra Type R, which is quite fascinating. You can’t go wrong at that price for one of these, and it’s only going to go up in value.

Meanwhile, there seems to be a huge number of Mazda RX-8s for sale. There are oil and fuel consumption issues, but who cares? One of the most interesting coupés made in the past decade, the RX-8 is worth a look for the suicide doors, never mind the spin-cycle rotaries. You can bag yourself a 2007 example for £3500. 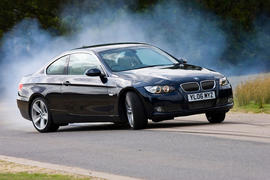 The BMW 3 Series Coupe is stylish, recently updated and has an unrivalled blend of performance and economy

RX-8 - not so cheap overall

28 April 2015
I've just replaced my beloved mk2 MX-5 - I needed something more appropriate for running our baby around - and really fancied an RX-8. I think they still look great and the back doors are a massive advantage over 2-door coupes when you've got a wriggling toddler to install. As you say, there are loads around and I do so few miles that consumption isn't a worry. But the killer for me was road tax of £500 per year: keep it for three years and you'll have spent more on road tax than depreciation, and your £3.5k RX-8 looks less of a bargain. Add in the reliability scare stories and it's easy to see why they're cheap...

28 April 2015
Buy a March 2006 registered or older RX8 and the tax is £290. It's a hell of a lot of car for the money and an interesting one at that, just keep a bit of dough aside for the rebuild it will need at some point if it has not already had one!