BACK TO ALL OPINION BLOGS
Currently reading: Marino Franchitti on how to attack Eau Rouge in a Ford Focus RS
UP NEXT
Matt Prior: Sometimes being a car journalist is a pain in the back

Marino Franchitti called me a lucky **** last Friday. The Ford World Endurance Championship driver was due to drive the number 67 GT in the 6 Hours of Spa the following day, but his expression suggested he wouldn’t mind hanging around until Sunday to have a go in our Nitrous Blue Ford Focus RS.

Luckily for me, his busy calendar meant I didn’t have to share my drive with a 12 Hours of Sebring race winner, but shortly after Friday’s final practice Franchitti did helpfully pass on a few hints and tips to help me attack the famous Belgian circuit properly.

“Really you should use Drift mode everywhere,” was an opening comment of his, but I explained that we’d be running with other cars on a Spa public track day, so this might be slightly anti-social.

I sketched out an outline of the 4.3-mile track on a blank sheet of paper and handed Franchitti a pen so he could mark out any key points to help me perfect my race line.

The ballpoint headed down the main straight towards turn one: the La Source hairpin.

“The main thing here is the exit,” he said, “because the speed you have there you’re going to carry all the way down the hill.” 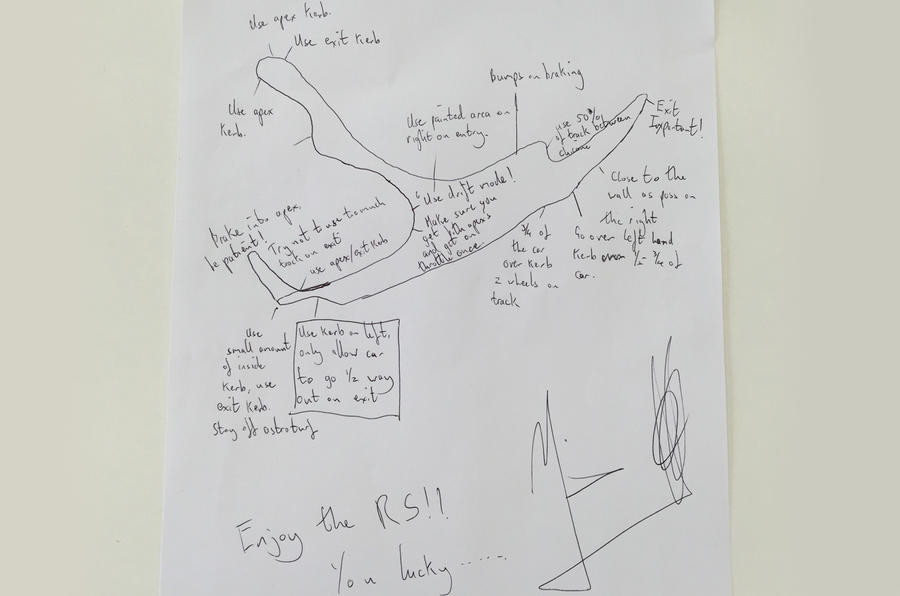 “Then [for the entry of Eau Rouge] be as close to the wall on the right as possible, and go over the left-hand kerb with half, maybe even three-quarters of the car."

In his GT racer, Franchitti is still flat out at this point, but in the five-door Focus RS, he concedes I might have to lift. “You’ll be lifting as you go down so you can get the car turned and get the trajectory right. As you go over the kerb [on the left], turn it, accelerate and apex the kerb on the right.”

When racing, Franchitti has to avoid carrying too much speed up the hill so as to not run over the larger kerb on the left. “But you’re not going to have to worry about track limits,” he said with a smile, “so use as much of it as you can.”

This then launches you down the Kemmel Straight, where the fastest WEC racing cars can reach close to 200mph. I wouldn’t see more than 140mph in the Focus RS the next day, yet I still hit the anchors 50 metres before the 100-metre board Franchitti uses as a brake point in his GT. Any later and I’d need to pit for a change of underwear.

Franchitti talked me through the whole lap, and his advice ultimately helped me to extract enough performance from the RS to give everything from a Ferrari 458 Italia to a pair of Porsche Cayman GT4s a run for their money. It also meant I bonded with the hot Focus far more than I thought I would.

Look out for a full write-up of how the RS fared at Spa in an upcoming issue of Autocar magazine, but for now, you can ride on board through Eau Rouge in the video below. Click here to view the full lap.

The RS Driver must've been pretty sweaty after that!, the gap was constant,the RS never got within 300yrs of it,it tortured it tyre's round every corner,the Porsche looked composed and when needed could eek out a few more yards no sweat at all,different league stuff i think,but, for the money,the RS is good.
david RS 14 May 2016

It's different, but think to

Spa has been a bit denatured

Spa has been a bit denatured by the outside track bitumen...
View all comments (4)