BACK TO ALL OPINION BLOGS
Currently reading: Racing lines: Robin Shute on gunning for a second Pikes Peak win
UP NEXT
Opinion: Why the Festival of the Unexceptional is an annual highlight

Who is the only British racing driver to have claimed an overall victory at the Pikes Peak International Hill Climb – one of America’s greatest and oldest races, which dates all the way back to 1916? And did you know that he achieved the feat only as recently as 2019?

Robin Shute (who lives in Los Angeles but hails somewhat ironically from famously flat Norfolk) is hardly a household name, but he deserves greater recognition for his unique achievement, especially as he will attempt to double his tally this Sunday when the 99th edition of the ‘race to the clouds’ hits the famous mountain road in Colorado.

Shute sat out the 2020 running, but now his TSC Motorsport team is back with its Wolf GB08 TSC-LT, an Unlimited-class sports racer. It features a major aerodynamic overhaul that includes, as the name suggests, a tail extension. This promises 50% extra downforce over his 2019 race-winning version.

Overall victory is once again in Shute’s sights, but he also has one eye on the rear-wheel-drive record time of 8min 37.230sec, which is more than 30 seconds quicker than his winning time from two years ago. But that bolstered aero package, combined with 550bhp from a Mountune-developed 2.1-litre Honda K-series engine, leaves Shute confident that he will set a new mark one day.

The outright record time, incidentally, is an astonishing 7min 57.148sec, set in 2018 by Romain Dumas at the wheel of Volkswagen’s ID R electric prototype.

A mountain to climb

Mario Andretti, Bobby Unser, Robby Unser, Walter Röhrl, Michèle Mouton and Ari Vatanen are just some of the illustrious names on the winners’ list that Shute joined in 2019.

The Climb Dance film that captured Vatanen’s famous run in a Peugeot 405 T16 in 1988 enshrined the legend of Pikes Peak, back when the mountain road was all on the loose. Over the years, sections were sanitised by asphalt, and since 2011 the race route has been completely paved. But at 12.42 miles long, featuring 156 turns, a climb of 4720ft and a heady altitude at the finish of 14,115ft, it’s still a stretch to connect the word ‘sanity’ to Pikes Peak.

Sadly, it’s still lethal as well. Shute’s 2019 victory celebrations were muted by the death of four-time winner Carlin Dunne, who fell from his Ducati motorcycle a quarter of a mile from the finish while chasing a new two-wheeled record.

Shute says that he’s a “huge fan” of the event and confirms a winning run at Pikes Peak feels “bonkers”. “It’s quite abstract for me, really,” he reflects. “I knew I had it in me to win, but the reality still hasn’t sunk in yet. I will win a few more and see how it sits then…”

The RWD benchmark is his ultimate ambition. “I will keep going back until I set a new hill record,” he says. “It won’t happen in one big jump; we will steadily chip away at it year after year. 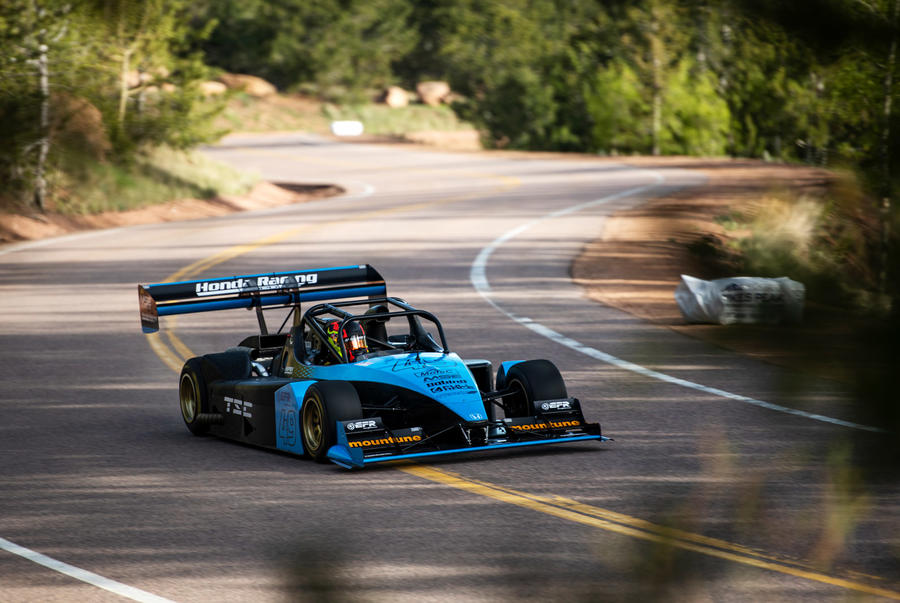 “Based on engineering simulations for this year’s car, 8min 37.230sec is an attainable goal. It was actually attainable in the 2019 car, but you can never be sure what race day will throw at you. We keep going back because it’s a really enjoyable engineering problem to solve – and a lot of fun to drive.”

So what’s it like climbing Pikes Peak on the modern paved surface? “For the most part, it’s a fast and flowing course with smooth asphalt, punctuated with hairpin bends,” says Shute. “Then the top gets insanely bumpy – the kind of bumps that rattle your brain. It’s faster to set up the car stiff and low for the good asphalt and accept that you will lose some brain cells on the top section.

“I can’t really comment too much about the gravel, as I never drove it that way. But the speeds are a lot higher now, and that comes with its own challenges and reduced margins for error. The cars looked spectacular in the gravel days; I can see why people miss the loose surface.

“I like how the event and machinery have evolved so much over the years: it’s part of what makes it so special.”

As Shute says, Pikes Peak is “assault on the senses” motorsport. “Physically, it’s very demanding, due to the high forces and shortage of oxygen,” he explains. “Car acceleration is the lowest force, yet that’s still over 1g at 100mph. We will see peaks over 4g in cornering and braking, and that’s with no power steering. I do a lot to train physically in preparation for the event, but it won’t be enough to be fully comfortable in the car. Plumbing oxygen into your helmet makes a big difference, but going up in altitude that quickly still gives me a huge headache.”

Guy Martin (very much a household name, of course) won the two-wheeled exhibition class in 2014, but brave Shute stands alone as a Brit racing to the clouds – and winning – on four wheels. Keep your fingers crossed for him on Sunday.

America’s Indycar Series just gets better by the race. By the time you read this, the round at picturesque Road America will have been and gone, but the star of Detroit’s Belle Isle double-header was 22-year-old Patricio O’Ward. He claimed pole and finished third in the first race, then charged from P16 to first in the second to become the first two-time winner in 2021.

McLaren Racing chief Zak Brown has already confirmed the Mexican for a Formula 1 test at the end of the season, and it will be fascinating to see how he adapts. Outside of F1, he’s the most exciting rising single-seater talent in the world right now.